Messi cries while celebrating the Copa America title in front of the Argentine fans.. Video 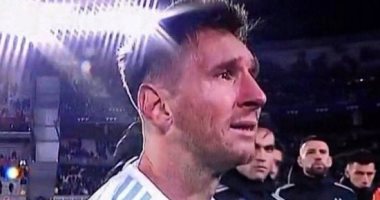 The Argentine star Lionel Messi, the French player of Paris Saint-Germain, cried during the Argentine fans’ celebrations of the Copa America title, which the team crowned last July, which came after the great victory that he achieved a short time ago against the Bolivian team with three clean goals, in the confrontations of the tenth round of the South American qualifiers. Qualification for the 2022 World Cup.

Messi appeared crying during the celebrations after the end of the Bolivia match, with the team crowning the Copa America title in front of the Argentine fans for the first time, who returned to the stands during that confrontation after an absence of a year and a half due to the repercussions of the Corona epidemic.

The Argentine Football Association was keen to hold a celebration of the Copa America title, after the end of the Bolivia match, in the presence of the masses for the first time.

Argentina ended the first half with a clean goal, scored by star Lionel Messi in the 14th minute of the match, from a wonderful shot to the right of the Bolivian goalkeeper.

Melania Trump is not interested in returning to the White House, sources say