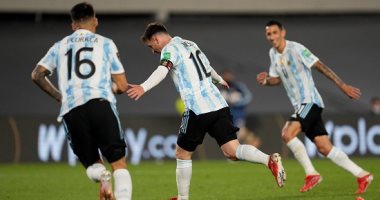 Lionel Messi, the star of Paris Saint-Germain, led the Argentine national team to beat its host Bolivian by three clean goals, in the meeting that brought them together in the early hours of Friday morning, at the “Monumental” stadium in the capital, Buenos Aires, as part of the tenth round of the South American qualifiers qualifying for the finals. World Cup 2022.

Argentina ended the first half with a clean goal, scored by star Lionel Messi in the 14th minute of the match, with a wonderful shot to the right of the Bolivian goalkeeper.

Uruguay defeated its Ecuadorean side with a clean goal, in the match that brought the two teams together in the early hours of Friday, at the Centenario Stadium, as part of the tenth round of South American qualifiers for the 2022 World Cup in Qatar.

Paraguay also beat its host Venezuela, 2-1, in the match that brought them together at the “Defensores del Chaco” stadium.

Colombia defeated its guest, Chile, 3-1, in the meeting that brought them together in the early hours of Friday morning, at the “Metropolitano Roberto Melendez” stadium.

FDA May Approve Moderna Vaccine for Children This Fall | Video