Messi plays his 150th game in the Champions League 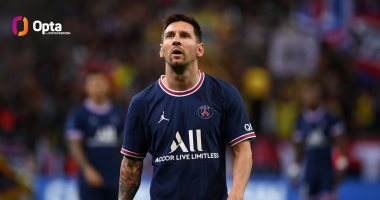 Lionel Messi will appear for the 150th time in the Champions League this evening, becoming the third player on the pitch to reach that number in the competition (Cristiano Ronaldo, 177 and Xavi, 151).

Argentinian coach Mauricio Pochettino announced the official line-up for his match, scheduled to be held at nine in the evening, today, Wednesday, against his counterpart Club Brugge at the “Jean Bridal” stadium, in the first round of the first group of the Champions League.

Paris Saint-Germain is competing in Group A of the Champions League, with Manchester City, Club Brugge and Leipzig in Germany.

The official formation witnessed the presence of the trio Lionel Messi, Kylian Mbappe and Neymar da Silva in the front line of the Parisian team.

No voice is louder than Messi’s voice in this confrontation, as the Argentine star appears for the first time in the Paris Saint-Germain shirt in the Champions League, after his departure from Barcelona, ​​where he had cut the tape of local participation with the French capital club.

Technical differences and heavy elements give the victory to Paris Saint-Germain, compared to Club Brugge of Belgium.

The formation of Paris Saint-Germain is led by a number of distinguished players, led by Argentine Lionel Messi, Neymar da Silva and Kylian Mbappe, in order.

Paris Saint-Germain dreams of winning the first title of the Champions League, with Lionel Messi, after losing the championship in the 2019-2020 season, after losing to Bayern Munich with a clean goal.

Paris Saint-Germain is playing the Champions League this season, with the same dream of Manchester City, as the French capital club is looking forward to winning the first European title in its history.

Argentine star Lionel Messi will lead the formation of Paris Saint-Germain for the first time mainly this season against Club Brugge, accompanied by the prominent duo Kylian Mbappe and Neymar da Silva.

The Paris Saint-Germain team glowed, in the first 5 rounds of the French League this season, with 5 victories, 15 points, topping the top of the competition standings so far.

Learn about the benefits of giving up eating meat.. the most prominent of which is the prevention of cancer

“there is no need to get negative”