Messi: They treated us like losers before winning the Copa America and the fans made me happy 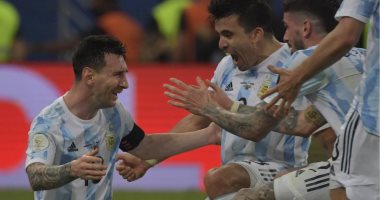 The Argentine star, Lionel Messi, player of the Paris Saint-Germain team, confirmed that some journalists treated him and the players of his country as failures, before winning the Copa America 2021 title, which was held in Brazil this summer.

Argentina, under the leadership of coach Lionel Scaloni, won the tournament awaited since 1993 at the expense of Brazil, after winning 1-0 with a goal scored by Angel Di Maria, last July..

Speaking to ESPN, Messi said:We have to focus on our goal, we have to keep collecting points in order to qualify for the World Cup in Qatar 2022. Without any doubt, against Bolivia, we will enjoy playing with the fans again.”

He continued, “There was a part of the press that treated us as losers and that we did not feel the value of the shirt, and that we should stop wearing this shirt, but in fact we did the utmost.”

And the Argentine star continued, “Unfortunately, in the finals only one team wins, but reaching the final of the World Cup or Copa America is important, but many did not take it that way.”

He continued, “My children sing the songs of the Argentine national team, even the little Ciro, I can’t believe the happiness that I feel for that, I saw several videos of how people lived with their family the joy of winning the Copa, these are things that make you happy .. Make you really realize what we did .. This was crazy but Now it’s over and life will go on.”

He concluded, “All the titles I won are important, but the Copa was special because of everything that happened. It was definitely the hardest. We have to keep growing and take advantage of winning the Copa America. We have to improve our game.”

how steady is the support at $24