In the series, Mia and Dylan repeated their accusations that Allen sexually assaulted Dylan in 1992 when she was seven years old.

Allen, who has denied being inappropriate with Dylan, and his wife, Soon-Yi Previn, have attacked the series that re-examines the decades-old allegation that the Oscar-winning filmmaker molested his adopted daughter, calling the television series a ‘hatchet job’.

During Sunday night’s episode, Mia confronted Allen in a taped phone call from around the time that the abuse was alleged to take place. 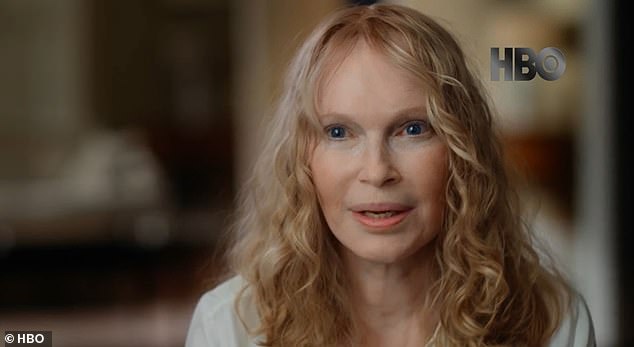 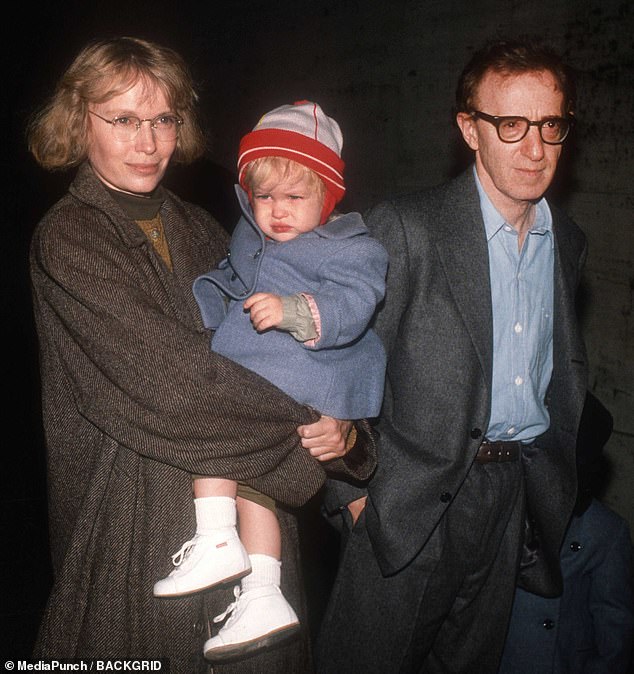 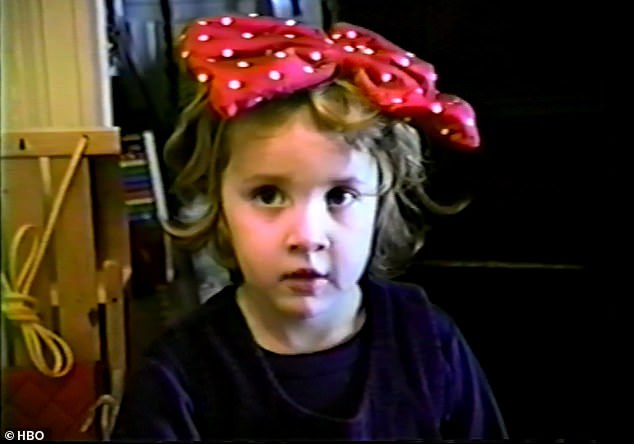 At one point, Mia tells Allen that Dylan (pictured as a young girl) is ‘not all right’. ‘She walks around the house holding her vagina. She sleeps with me. She’s scared of you, and you hurt her,’ Mia told Allen

Allen’s response is inaudible. ‘I know what Dylan tells me. You’ve told me nothing but lies. Dylan tells the truth and consistently,’ Mia continued.

Allen is heard saying: ‘But you know that I didn’t….’

‘No, I don’t know that, Woody,’ Farrow said, cutting him off. ‘I’ve always, always been worried about you and Dylan.’

Mia then tells Allen that she was unaware a doctor she took Dylan to following the alleged assault reported the suspected abuse to the authorities.

She said she only took Dylan to the doctor for an examination to make sure she was okay.

‘And she’s not all right, Woody,’ Mia is heard saying. ‘She walks around the house holding her vagina. She sleeps with me. She’s scared of you, and you hurt her,’ Mia continued.

Mia then says she’s heartbroken for not being able to save her daughter.

‘If you heard her, you would weep inside, and you would just want to be dead, because I don’t know how you can live with what you did,’ Mia said during the call.

Nine days after the alleged abuse, Allen sued Mia for custody of their three children, Dylan, Moses and Ronan Farrow. 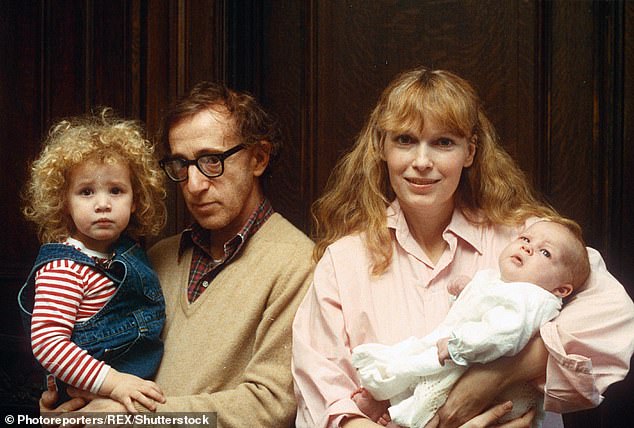 Nine days after the alleged abuse, Allen sued Mia for custody of their three children, Dylan (left, being held by Allen), Moses and Ronan Farrow (right as a baby) 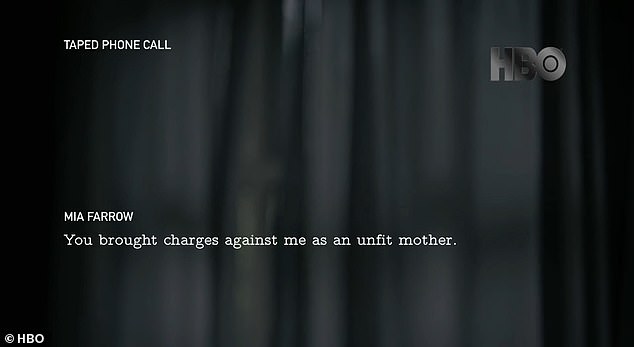 In a second taped phone call, Mia is heard saying: ‘You brought charges against  me as an unfit mother’ 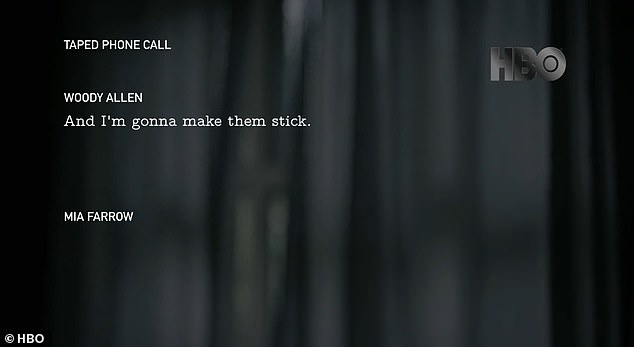 ‘And I’m going to make them stick,’ Allen said as Mia begged him to drop the case 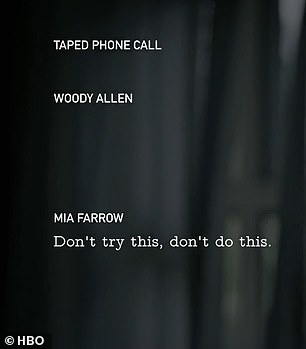 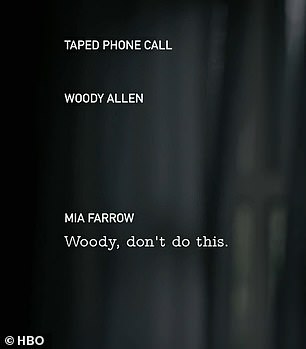 In other parts of the conversation, Mia begs Allen to drop the case, saying: ‘Don’t try this, don’t do this’ 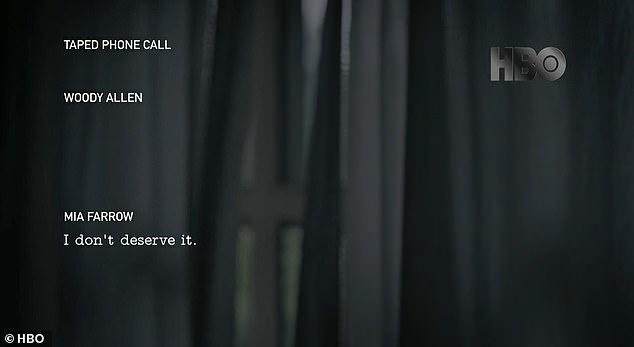 ‘I don’t deserve it,’ Mia tells Woody during the taped phone call

Sunday night’s episode shows another taped phone call in which Mia confronts Allen again but this time about his accusations that she was an unfit mother.

‘And I’m going to make them stick,’ Allen said as Mia begged him to drop the case.

The lawsuit was filed after the filmmaker admitted a love affair with Previn, who was 22 years old at the time.

Mia learned of the affair between Allen and her daughter when she found revealing photographs of Previn that had been taken in Allen’s apartment. Allen and Previn, who have a 35-year age gap, have been married since 1997.

At the time of the custody battle, Mia had 11 children, four of whom were hers by birth. She and Allen adopted Moses, Dylan, and had Satchel (now Ronan) together.

Shortly after the first episode of the series aired, a spokesperson for Allen and Previn issued a statement saying the documentary makers ‘had no interest in the truth’.

‘Instead, they spent years surreptitiously collaborating with the Farrows and their enablers to put together a hatchet job riddled with falsehoods,’ the statement said.

‘As has been known for decades, these allegations are categorically false,’ it added. 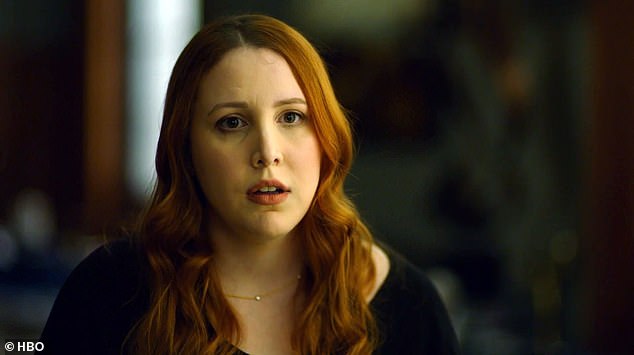 Allen, who has denied being inappropriate with Dylan (pictured in the documentary), and his wife Soon-Yi Previn immediately attacked the series that re-examines Dylan’s decades-old allegation that Allen molested her when she was seven 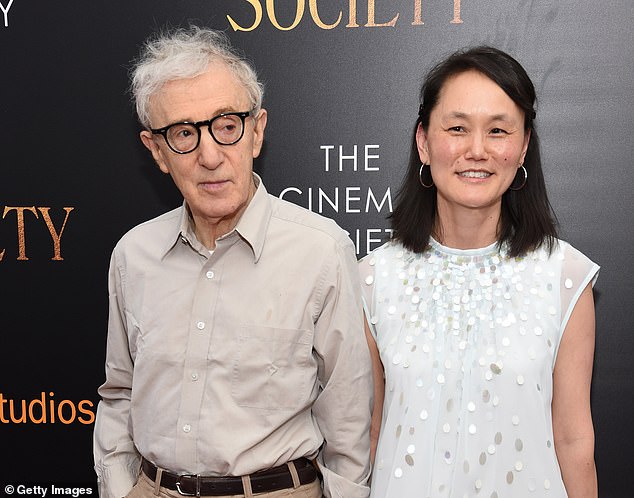 Allen admitted to Mia that he was having an affair with her then-22-year-old adopted daughter, Soon-Yi Previn. The two have been married since 1997. The couple blasted the HBO film as a ‘hatchet job’ that was ‘riddled with falsehoods’

Allen, the four-time Oscar-winning director of Annie Hall and other comedies, has repeatedly denied molesting Dylan. He did not take part in the documentary.

The filmmaker, 85, has long asserted that Mia fabricated the molestation claim against him and planted them in Dylan’s mind after learning that Allen was having an affair with Previn.

Allen has never been arrested or prosecuted over the allegation of sexual abuse, which was first made in 1993. It was investigated by state police in Connecticut, where Mia and her children lived.

Allen refused to take a polygraph with a police officer and offered up his own, privately done one instead.

Prosecutors found there was probable cause to issue an arrest warrant for 1st and 4th degree sexual assault of a minor.

But they decided not to move forward with the case because of Dylan’s mentality fragility and her young age.

The statement from Allen and Previn’s spokesperson said ‘multiple agencies’ had investigated the allegation at the time ‘and found that, whatever Dylan Farrow may have been led to believe, absolutely no abuse had ever taken place’.

‘While this shoddy hit piece may gain attention, it does not change the facts,’ the statement said.

Rust Finally Gets its Console Launch This Spring

Hungary .. protests against the closure