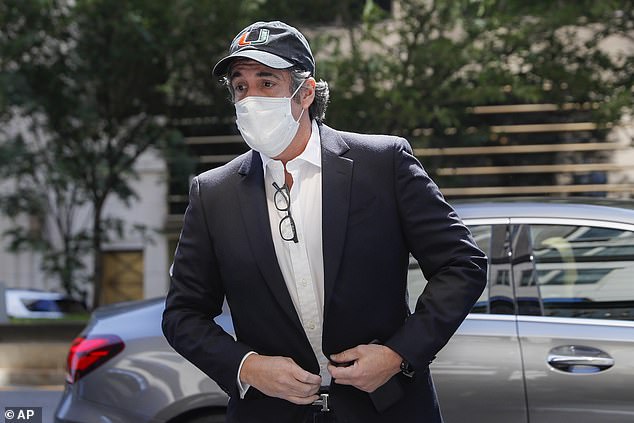 Michael Cohen is set to be interviewed by Manhattan District Attorney Cy Vance Jr. for the fourth time as part of the criminal probe into Donald Trump, DailyMail.com can reveal.

Sources say the move could mean indictment of the former president and members of the Trump Organization in the financial fraud inquiry.

Trump’s former fixer Cohen is a key part of Vance’s investigation, which is the only known active criminal inquiry into Trump.

It’s understood Cohen will be questioned in more detail Friday on Trump’s finances, including his relationship with Deutsche Bank, his primary lender for decades.

The probe is focused on allegations of bank, tax and insurance fraud, as well as falsification of business records.

Cohen will likely be questioned in more detail Friday on Trump’s finances, including his relationship with Deutsche Bank, his primary lender for decades. Trump was seen golfing in West Palm Beach, Florida this month

A source told DailyMail.com: ‘Cohen has been summoned again to meet with the DA and his team. This will be the fourth time he has been interviewed since his release into home confinement.

‘It seems Vance is putting the final pieces of the puzzle together. It has led everyone to believe the indictments against Trump, members of his family and his eponymous company are imminent and are being prepared as we speak.

‘Now Trump is out of office Vance is buttoning up all the information he has gathered to present to a Grand Jury.

It’s understood Trump’s former fixer Cohen is a key part of Cy Vance’s (pictured) investigation, which is the only known active criminal inquiry into Trump

‘Things have definitely heated up since Trump left the White House and the focus continues to be economic improprieties by Trump and the Trump organization.

‘Cohen has now given information to Robert Mueller, Congress, the House of Representatives, the Senate, the House Committee of Oversight and Reform, the DA and Attorney General, these bodies would not keep coming back to him time and time again if they didn’t think his information was both important and genuine.’

The Trump Organization did not respond to a request for comment by DailyMail.com. Cohen also declined to comment when contacted.

The DA originally launched the probe into Trump two years ago to investigate whether the then president broke New York state laws by ordering Cohen to issue illegal hush payments on his behalf to two of his alleged extra-marital lovers before the 2016 election.

However, Vance later expanded the scope of his investigation to include what prosecutors described in court papers as ‘extensive and protracted criminal conduct at the Trump Organization.’

Cohen, who’s serving a three-year prison sentence in home confinement for facilitating the payoffs to Trump’s alleged lovers and a string of other financial crimes, has long alleged that his former boss committed fraud.

Trump has previously called Vance’s probe ‘a fishing expedition’ and ‘a continuation of the witch hunt — the greatest witch hunt in history,’ accusing the elected Democrat of partisan motives.

The New York Times reported in December that the DA was intensifying his investigation ahead of Trump’s exit from office by, among other actions, interviewing employees at Deutsche Bank and Aon, Trump’s longtime insurance broker.

While it’s still unclear whether Vance will bring charges, the DA’s probe is the most serious legal threat to Trump now that he’s no longer protected by presidential immunity.

Trump ultimately declined to issue pardons for himself or his family members before leaving office, which in any event would not protect him from state charges, only federal ones.

Cohen, who’s serving a three-year prison sentence in home confinement for facilitating the payoffs to Trump’s alleged lovers and a string of other financial crimes, has long alleged that his former boss committed fraud

Trump has previously called Vance’s probe ‘a fishing expedition’ and ‘a continuation of the witch hunt — the greatest witch hunt in history,’ accusing the elected Democrat of partisan motives

In early January it was reported that Vance’s team conducted an hours-long interview with Cohen and prosecutors also began looking into a 212-acre Trump Organization property called Seven Springs as part of an investigation that started over a year ago.

The compound is also one of four Trump Organization properties under civil investigation by New York’s state attorney general, who is probing whether Eric Trump and various corporate entities artificially inflated property values.

FTI Consulting, one of the largest financial consulting firms in the world, offers a full range of forensic, investigative, data analytic and litigation services, according to the company’s website.

In a long-running legal battle, Vance is still fighting in court to obtain eight years of Trump’s tax returns from the president’s accounting firm, Mazars USA.

The tax returns, which Trump did not disclose during either of his presidential campaigns in a break from precedent, are believed to be the final keystone in Vance’s investigation.

The Supreme Court already has ruled once in the dispute, in July rejecting Trump’s argument that he was immune from criminal probes as a sitting president.