Michael Schumacher complained about the snow conditions in the Alps and suggested flying to Dubai shortly before the tragic skiing accident that left him with a near-fatal brain injury, his wife has revealed.

Corinna, 52, broke her eight-year silence about the Formula One icon’s condition, admitting: ‘I miss Michael every day. But it’s not just me who misses him. It’s the children, the family, his father, everyone around him.

‘Everybody misses Michael, but Michael is here – different, but here. He still shows me how strong he is every day.’

She was speaking in a new Netflix documentary about the German driver’s life which reveals his doubts about the skiing conditions in the French resort of Meribel in December 2013.

Corinna says: ‘Shortly before it happened in Meribel, he said to me, “The snow isn’t optimal. We could fly to Dubai and go skydiving there.”‘

It was one of the last things the father-of-two said to his wife before he collided with a rock while skiing with his son Mick, then 14. The champion driver suffered a catastrophic brain injury that left him in coma for six months.

Since then, Schumacher has been cared for privately at his Swiss home by Lake Geneva and the family have kept details about his health tightly guarded.

Now Corinna has decided to open up with the release of the Netflix documentary ‘SCHUMACHER,’ revealing that during his racing days she had always believed that ‘guardian angels’ were watching over her husband.

‘We’d always made it through his races safely,’ she said. ‘Which is why I was certain he had a few guardian angels that were keeping an eye out for him. 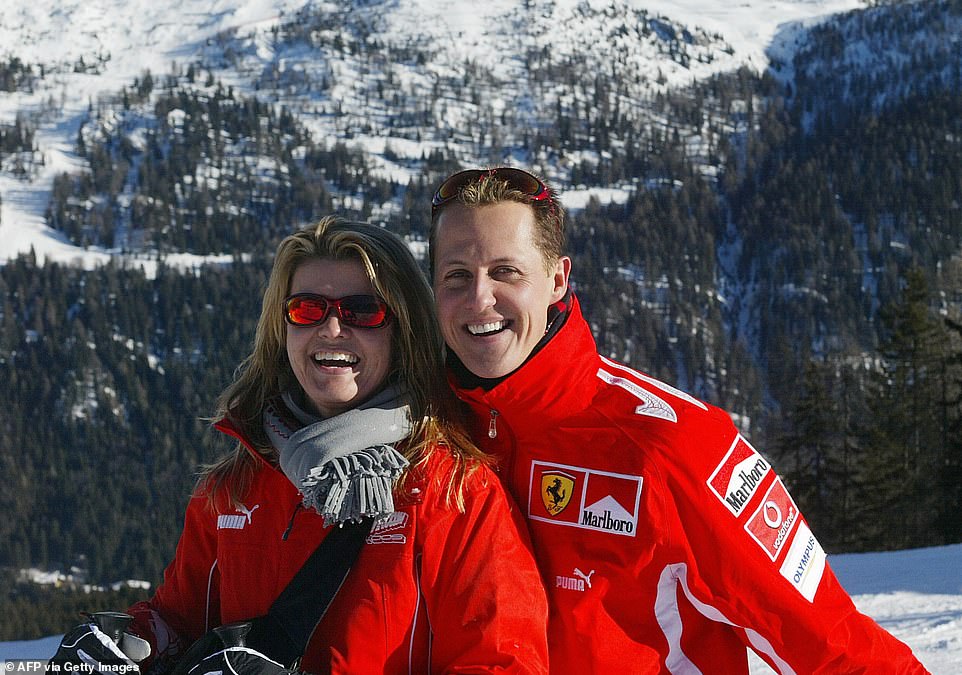 Corinna, 52, (pictured with Michael in Italy in 2005) broke her eight-year silence about the Formula One icon’s condition, admitting: ‘I miss Michael every day. But it’s not just me who misses him. It’s the children, the family, his father, everyone around him. ‘Everybody misses Michael, but Michael is here – different, but here. He still shows me how strong he is every day.’ 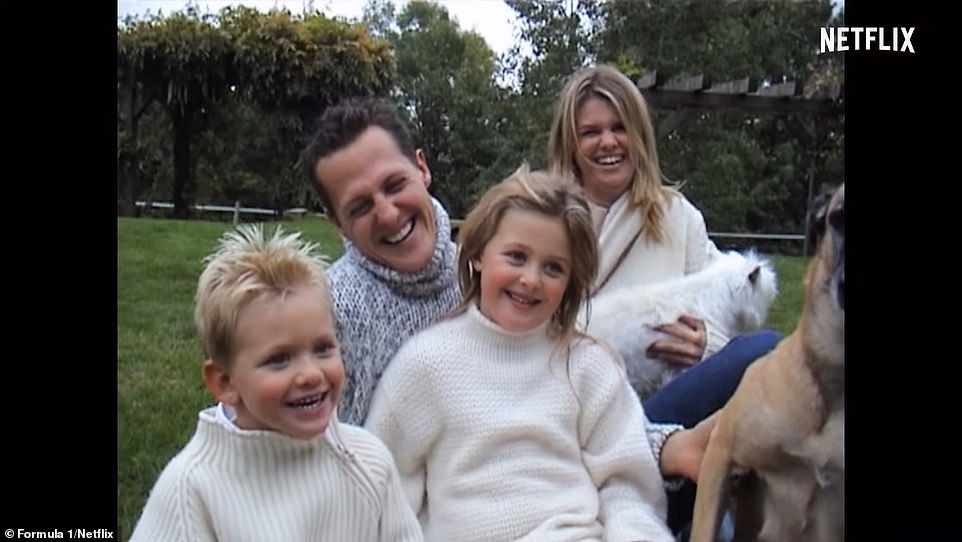 Corinna and Michael were married in 1995 and have two children together, Gina and Mick, who has followed his father into F1. Both the children appear in the documentary 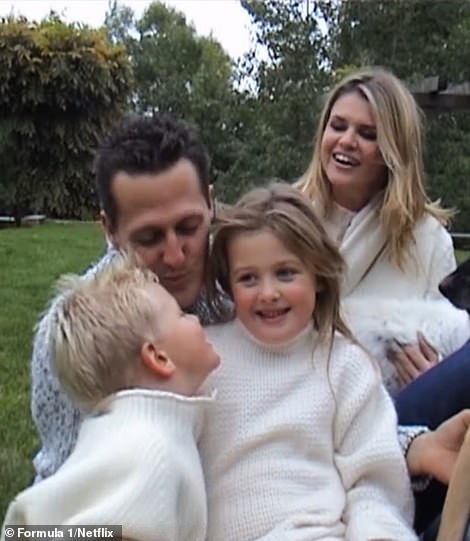 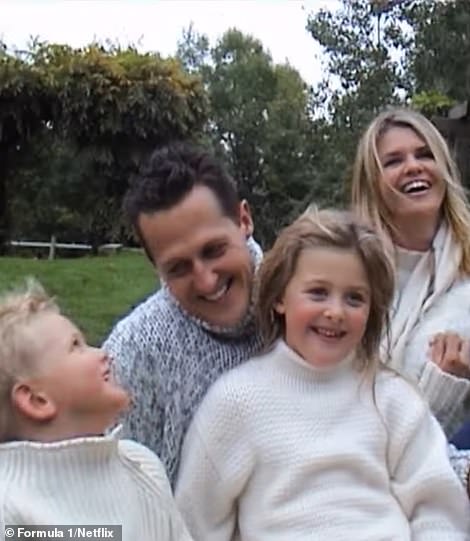 Michael in archival footage with his son Mick, daughter Gina and wife Corinna, in the new Netflix documentary 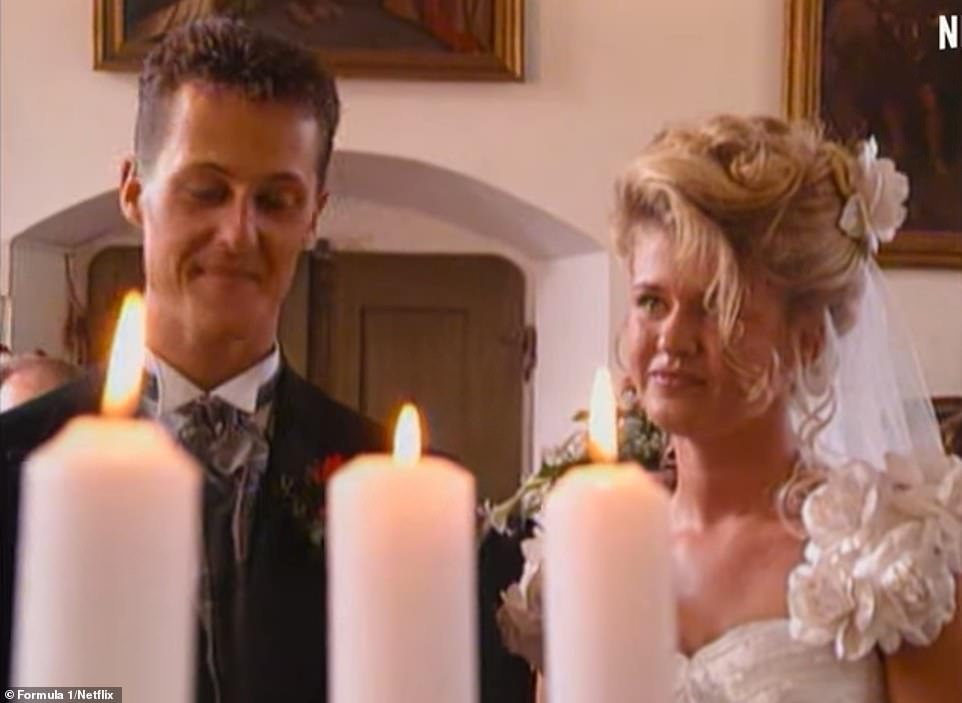 Schumacher and his wife Corinna were married in August 1995, they have two children together 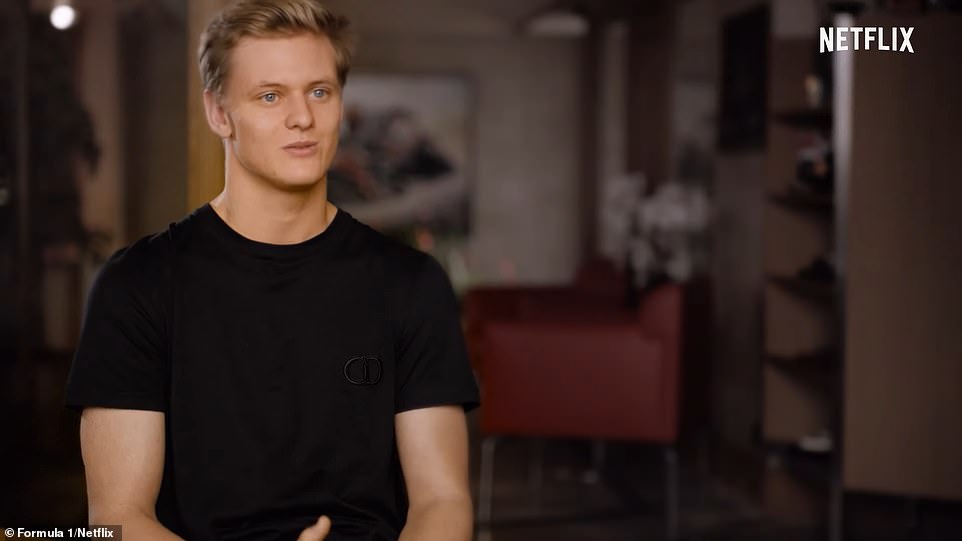 ‘I don’t know if it’s just a kind of protective wall that you put up yourself or if it’s because you’re in a way naive – but it simply never occurred to me that anything could ever happen to Michael.

‘I never blamed God for why this happened now. It (the accident) was just really bad luck – all the bad luck anyone could ever have in their life.’

Schumacher’s wife also also updated the world on how the former F1 driver’s family are coping following the serious incident eight years ago.

‘We are trying to carry on as a family, the way Michael liked it and still does. We live together at home. We do therapy. We do everything we can to make Michael better and to make sure he’s comfortable,’ Corinna says.

‘We are getting on with our lives: “private is private” as he always said. It’s very important to me that he can continue to enjoy his private life as much as possible. Michael always protected us, now we are protecting Michael.’

Corinna and Michael were married in 1995 and have two children together, Gina and Mick, who has followed his father into F1. Both the children appear in the documentary.

Mick was with Michael when he had his tragic accident in 2013 and the 22-year-old described how he would ‘give up everything’ for the chance to speak to his father about motorsport now that he is competing at the top level.

The Haas driver said: ‘Since the accident, of course, these experiences, these moments that I believe many people have with their parents, are no longer present or to a lesser extent. And in my view, that is a little unfair.

‘I think me and dad, we would understand each other in a different way now. Simply because we speak a similar language – the language of motor sport – and that we would have a lot more to talk about.

‘And that is where my head is most of the time. Thinking that would be so cool … I would give up everything just for that.’

Schumacher is considered by many as the sport’s greatest ever driver having won seven championship titles.

It was revealed in July that Netflix has purchased the rights to air a brand new documentary into the life of the 52-year-old.

The will include interviews with other members of Schumacher’s family, including his father Rolf and brother Ralf, as well as motorport figures such as Jean Todt, Bernie Ecclestone, Sebastian Vettel, Mika Häkkinen, Damon Hill, Flavio Briatore and David Coulthard.

Filmmakers, through the support of the family, will also be able to share never-before-seen archive material in the documentary set to be released on September 15. 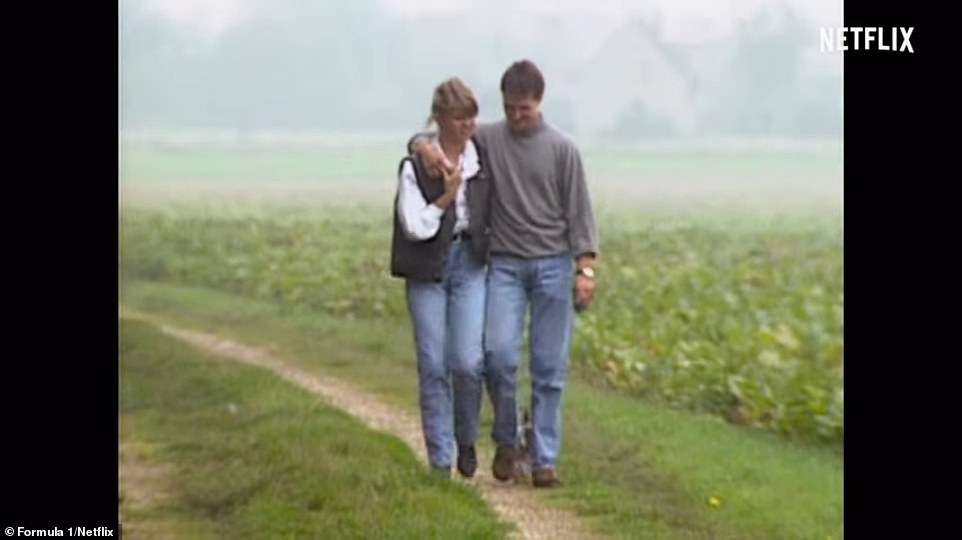 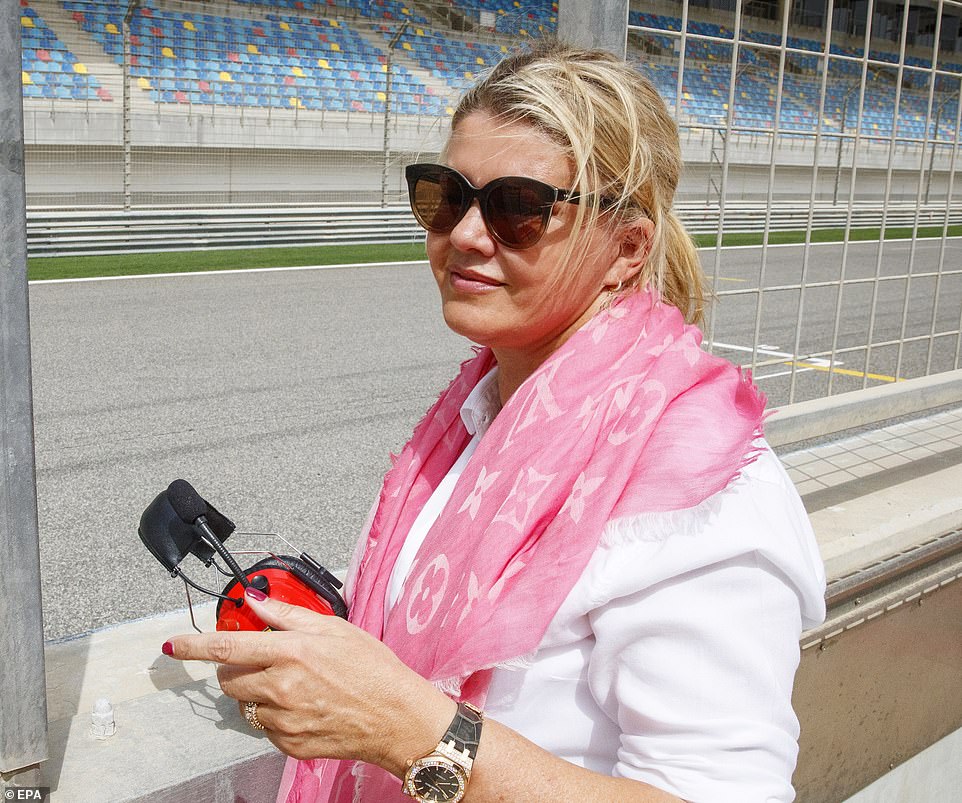 Corinna (above, pictured in 2019) says Michael is ‘different but here’ as he continues his recovery 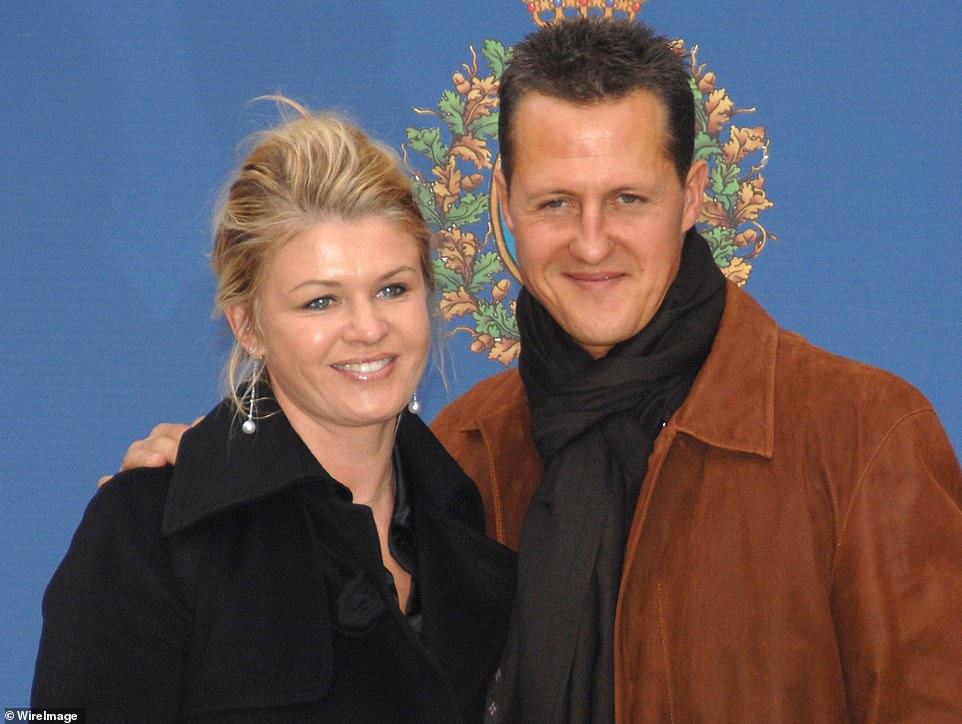 The Netflix show will also see son Mick, currently competing in F1, describing how ‘unfair’ it is that the family cannot take part in fun family moments together, with the 22-year-old saying he would ‘give everything up’ to catch up with Michael about how life has been for him.

Corinna’s update on her husband’s condition is the first news of the driver’s health since former Ferrari boss, Jean Todt, discussed his state in May of this year, saying ‘The beauty of what have experienced is part of us and it goes on.’

He added : ‘I don’t leave him alone. Him, [his wife] Corinna, the family – we’ve had so many experiences together.’

The update followed Todt’s previous account of Schumacher’s state in September of last year, where he praised the work done by Corinna, who has been married to Michael since August 1995.

He told Bild: ‘I’ve spent a lot of time with Corinna since Michael had his serious skiing accident on December 29, 2013. She is a great woman and runs the family.

‘She hadn’t expected that. It happened suddenly and she had no choice. But she does it very well. I trust her, she trusts me.

‘Thanks to the work of his doctors and the cooperation of Corinna, who wanted him to survive, he survived – but with consequences.’