Joe Biden‘s campaign has released a slashing video endorsement by Michelle Obama where the former first lady denounces President Trump as a ‘racist’ and says he ‘isn’t up for the job.’

‘Racism, fear, division — these are powerful weapons and they can destroy this nation if we don’t deal with them head on,’ she says in the video, where she speaks directly to the camera.

‘Let’s be honest, right now our country is in chaos because of a president who isn’t up to the job,’ says the popular former first lady, who also delivered an emotional pitch for Biden by video at the Democratic National Convention. 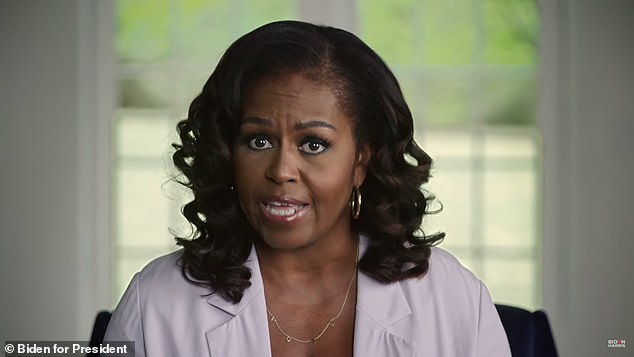 The Biden camp dropped the video Tuesday morning, just after Trump returned to the White House from Walter Reed hospital, and immediately resumed attacks on his own political rivals.

Obama married together her attacks on Trump’s ‘racism,’ with commentary on protest movements and blistering reviews of Trump’s handling of the coronavirus.

‘Let’s be very real. America is divided right now,’ she said. ‘And a lot of people are being sold lies from people who want to get rich or stay in power or sometimes both.’

‘Right now the president and his allies are trying to tap into that frustration and distract from his breathtaking failures by giving folks someone to blame other than them. They’re stoking fears about black and brown Americans. Lying about how minorities will destroy the suburbs. Whipping up violence and intimidation. And they’re pinning it all on what’s been an overwhelmingly peaceful movement for racial solidarity.’

She continued: ‘So what the president is doing is once again patently false. It’s morally wrong. and yes, it is racist. But that doesn’t mean it won’t work. Because this is a difficult time, a confusing time, and when people hear these lies and crazy conspiracies repeated over and over again, they don’t know what to think.’

She said ordinary people ‘don’t have time to check falsehoods being spread throughout the internet, and even reasonable people might get scared.

Obama said the ‘one thing this president is really really good at is using fear and confusion and spreading lies to win.’

She concluded with a plea for Americans to ‘search your hearts, and your conscience, and then vote for Joe Biden like your lives depend on it.’

She urges undecided voters ‘to think about all those folks like me and my ancestors’ and consider what it’s like ‘to walk around your own country scared that someone’s unjustified fear of you could put you in harm’s way.’

The video came a day after a batch of states closed voter registration – and as yet another national poll showed Biden running up a large lead over the president.

She blamed Trump for failing to develop a plan to contain the virus, amid daily reports of his own aides and advisors, as well as U.S. senators, contracting COVID-19.

‘Seven months later, he still doesn’t have a plan for this virus,” she said.

“Seven months later, he still won’t wear a mask consistently and encourage others to do the same — even when those simple actions could save countless lives. Instead, he continues to gaslight the American people by acting like this pandemic is not a real threat.”

She explained the video to her followers on social media, writing: ‘The truth is, the events of the past few days are a bracing reminder of the tragedy that has been this administration’s response to this crisis. And I’ll be very honest: This is a message I’d planned to release earlier, and after everything that’s happened, I weighed whether or not to go public at all. But I wanted you all to hear what’s been on my mind.’

‘Because the fact is that the drama of the past few days has only emphasized what’s at stake in this election — from the coronavirus to a constant drumbeat of fear, division, and chaos that’s threatening to spiral out of control. There’s only one way we can pull ourselves out: By voting for my friend Joe Biden, who’s got the heart, the experience, and the character to lead us to better days.’

‘So I hope you’ll watch, and I hope you’ll share this video with everyone you know who might still be deciding how or if they’re going to vote. And more than anything, I hope you’ll vote for Joe with power, with passion, and with a love of this country that cannot possibly be denied,’ she wrote.

Donald Trump says COVID-19 is ‘far less lethal’ than flu — but what does the data say?

Bowl projections: Florida remains ahead of Georgia in the College Football Playoff race

An earthquake of magnitude 5.4 hits Cyprus

Bowl projections: Florida remains ahead of Georgia in the College Football Playoff race

Long Covid: Who is more likely to get it?

900,000 Americans filed for unemployment benefits in the last week of Trump’s term

An earthquake of magnitude 5.4 hits Cyprus

Shares of Qualcomm (NASDAQ: QCOM) have continued to move higher in January but have struggled to...