Midwives have carved cervix dilation measurements into a group of Halloween pumpkins to create a ‘truly terrifying’ display.

Staff at Royal Oldham Hospital, Greater Manchester, carved ‘O’-shaped mouths measuring 1cm-10cm into pumpkins and left them out on the ward as part of a decorating competition.

A photo of the display has gone viral after it was shared by local news outlet The Manc on Facebook, racking up over 19,000 shares and a stream of comments. 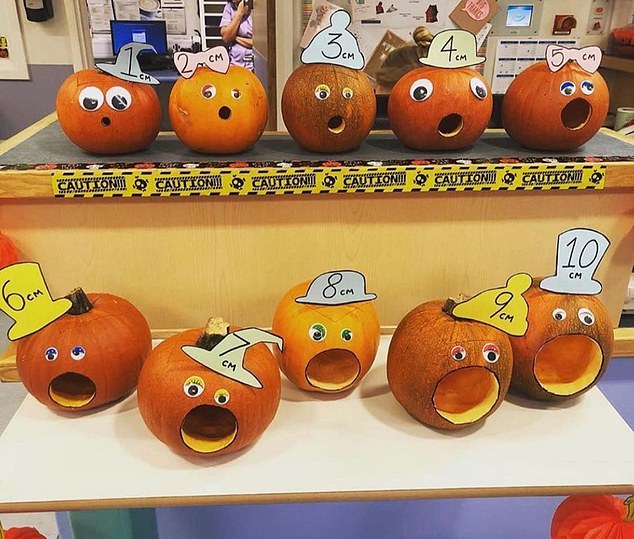 Staff at Royal Oldham Hospital, Greater Manchester, carved ‘O’-shaped mouths measuring 1cm-10cm into pumpkins and left them out on the ward as part of a decorating competition

Mothers and women hoping to have children in the future dubbed the display the most ‘terrifying’ Halloween decoration ever.

‘Why does that make me want to do some pelvic floor exercises,’ wrote one.

Another said: ‘No way did my bits get so big three times, yikes another reason to cross my legs forever.’

A third added: ‘That’s the most terrifying Halloween decorative I’ve ever seen!’

HOW LONG DOES LABOUR TAKE?

For first time mothers, labour usually takes around eight hours, according to the NHS. However, the time can vary.

Labour is split into three stages. The first part involves contractions to dilate the cervix to make room for the baby’s head to pass into the vagina.

The second part of labour lasts from when the cervix is fully dilated until the baby passes through the vaginal canal and is born.

The NHS states the second part is ‘hard work’ and that pushing can last up to three hours for first time mothers.

The third stage of labour doesn’t happen until a baby is born and the placenta is pushed out. This usually takes between 10 and 60 minutes.

Other responses to the post came from women remembering their own experiences of giving birth.

Further responses to the post came from women remembering their own experiences of giving birth.

‘OMG – that does not bear thinking about! Only thing I can think of here is at least it snaps back when baby is delivered – usually,’ wrote one.

Another said: ‘I had to get my second son out at 7cm, as his heart had stopped and he was born purple with cord around his neck.

‘Thankfully they got him breathing, no wonder I had to be stitched like mad. It’s amazing how our bodies work really’

A third added: ‘I got to 9cm before the hospital decided I was in labour and needed a Caesarean quickly!’

Laughing, a fourth wrote: ‘Ooooochy being a mum of five I remember the 10cm pumpkin well.

He’s the one that burns and stings in the most excruciating painful way.’ 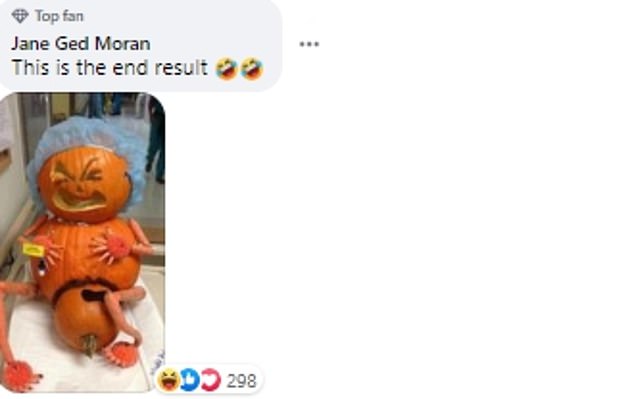 Many others shared stories from their own labour experiences, with some revealing they didn’t make it to 10cm