Migrant children housed in U.S. pop-up shelters reported overcrowding and long stay times, spoiled or undercooked food and lack of access to showers or clean clothes, according to testimonials filed in court Monday.

Seventeen minor migrants shared accounts with lawyers of their time in emergency shelters after crossing into the U.S. unaccompanied by adults. Some reported depression while others described trouble sleeping with round-the-clock bright lights.

A 13-year-old girl from Honduras wrote that she was placed on the suicide watch list at a shelter in El Paso, Texas set up at Fort Bliss. As of June 4, the girl spent nearly two months at the facility after being separated from her father when crossing a river into the U.S.

‘The food here is horrible,’ she wrote. ‘Yesterday we were given hamburgers but I couldn’t eat it because there was a foul odor coming from the bread.’

‘I really only eat popsicles and juice because that is the only food that I can trust.’

Migrant children in emergency holding facilities, including a massive one at Fort Bliss in Texas, detailed deplorable living conditions including spoiled or undercooked food in testimonials as part of a court filing Monday 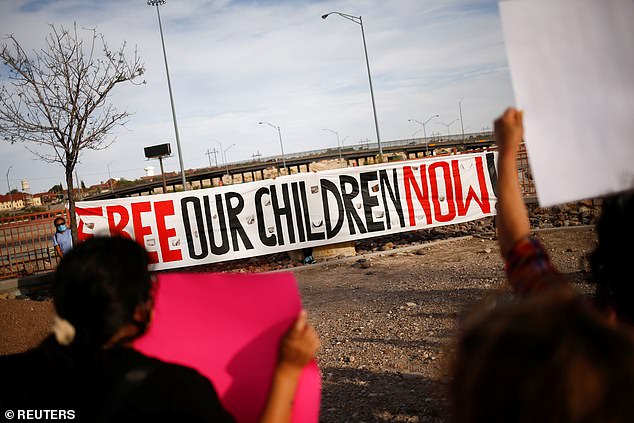 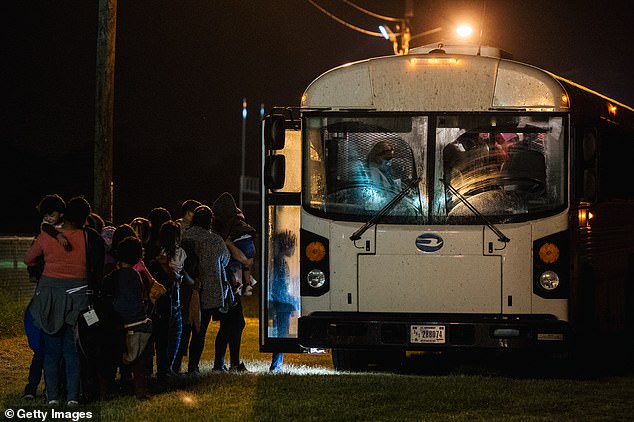 The shocking declarations come as hundreds of illegal crossers continue to flow over the southern border from Mexico. Here migrants board a bus oJune 21 to be taken to a processing facility after crossing the Rio Grande into the U.S. 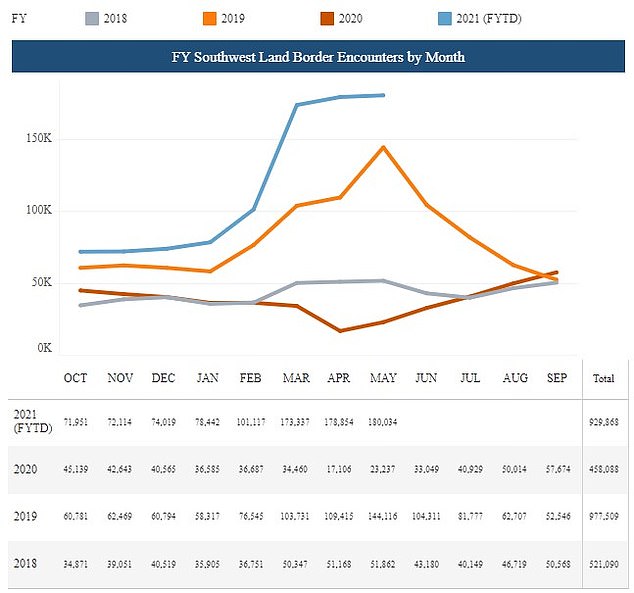 In May, U.S. Customs and Border Protection encountered 180,034 illegal crossers at the southern border, the most of any month so far

Joe Biden’s administration promised in March that migrant families won’t spend more than 72 hours in U.S. facilities, but unaccompanied minors, on the other hand, shared declarations of months inside emergency shelters in deplorable conditions.

Several claim they have been at the shelters for 60 days or longer.

Lawyers were given access to speak with children in these facilities as they monitor government compliance with the Flores Settlement – a 1997 agreement governing conditions for which detained immigrant children can be kept.

The team of attorneys have interviewed children and conducted site visits at the emergency shelters, which were originally intended for short stays.

‘Every day, I feel really sad. I keep seeing other kids leave,’ a 16-year-old from Guatemala being housed at a facility in Pecos, Texas said in a declaration filed Monday.

She has been at the site for 62 days waiting for reunification with her uncle in Maryland.

‘There are some other kids who have been here for about the same time as me, and there is just a lot of sadness among us,’ she said in a testimonial on her time in an emergency facility. 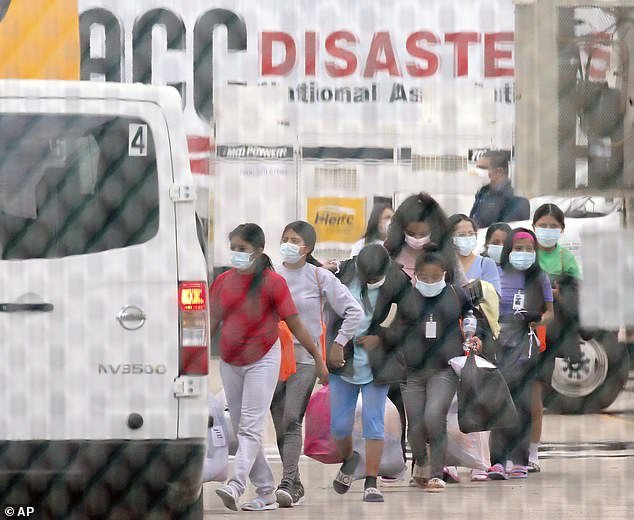 One Houston site set up by the National Association of Christian Churches was abruptly closed shortly before attorneys were set to visit. More than a dozen girls who were at the site were relocated upon its closure 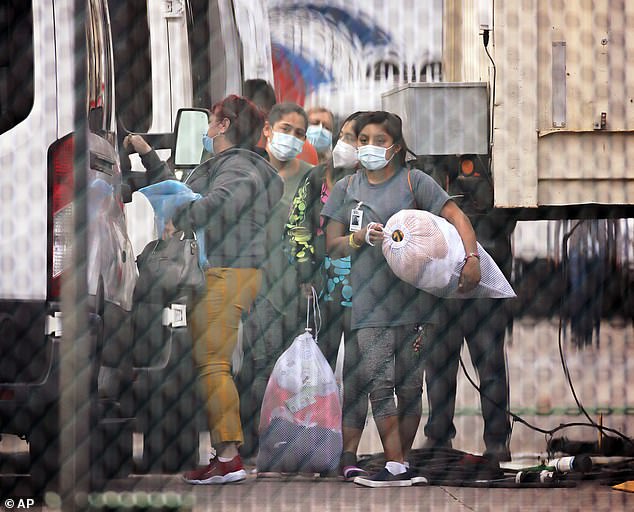 One 17-year-old girl from Honduras wrote: ‘The food was horrible. There was chicken that was boiled and when we opened the chicken it was raw inside.’ They also detailed fainting spells, lack of clean clothes and restrictions from using the bathroom after 10 p.m.

The Biden administration has sped up processing in Border Patrol detention facilities, more quickly transferring children to Health and Human Services facilities, where there is staff and resources better equipped to deal with the housing the children and working on reunifying them with family.

The children, however, have detailed conditions that are just as bad as when they were being held in detention facilities along the border.

There were nearly 14,500 children in HHS custody as of Sunday, down from the 22,000 in late April. Several hundreds of these nine through 17-year-old children have spent 60 days or more in the department’s emergency intake sites, according to the Monday court filing.

Most children in custody are from Northern Triangle countries – Honduras, Guatemala and El Salvador.

Children generally reported in their testimonials that they were only permitted outdoor recreation for ‘as little as one hour daily.’

They also reported little to no privacy, limited calls to family and extreme boredom to the point of sleeping during the day to pass the time. 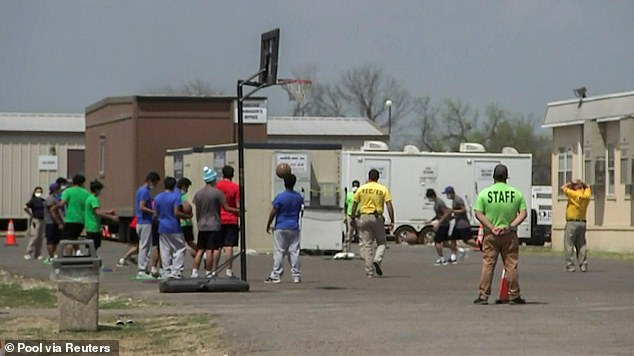 One Houston site, set up by the National Association of Christian Churches, was abruptly closed shortly before attorneys were set to visit, according to National Center for Youth Law immigration director Neha Desai.

More than a dozen girls who were at the site were relocated upon its closure.

One 17-year-old girl from Honduras wrote in her declaration: ‘The food was horrible. There was chicken that was boiled and when we opened the chicken it was raw inside.’

The girls also detailed in testimonials to lawyers that they had fainting spells, inadequate food, lack of clean clothes and restrictions from using the bathroom after 10 p.m.

‘During the day and night, we were told that we had to stay on our beds and could only get up to go to the bathroom and to shower’ a 17-year-old El Salvadorian girl described. ‘We had to eat on our beds because there was no other place to eat.’

She also said she had to wear the same clothes for 15 days and described staff members directing them ‘to wear the same underwear and just turn it inside out, because there wasn’t any laundry to clean our clothes.’ 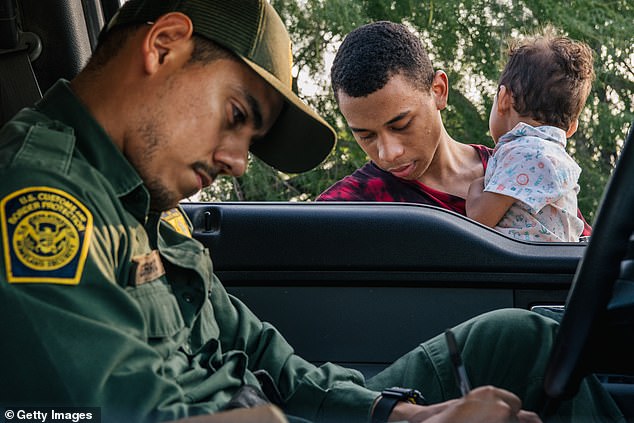 A border patrol officers processes a young man and child on June 21, 2021 after they crossed into the U.S. illegally 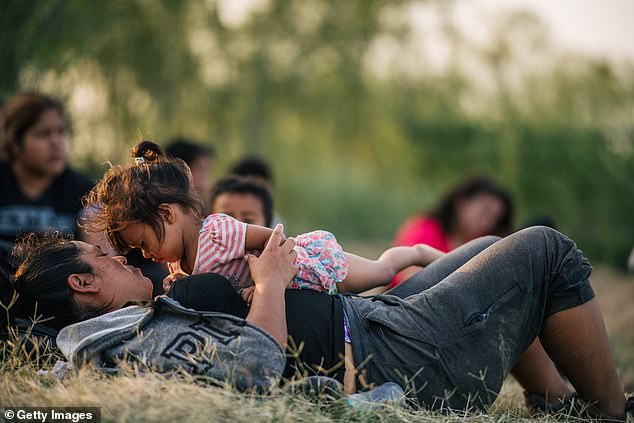 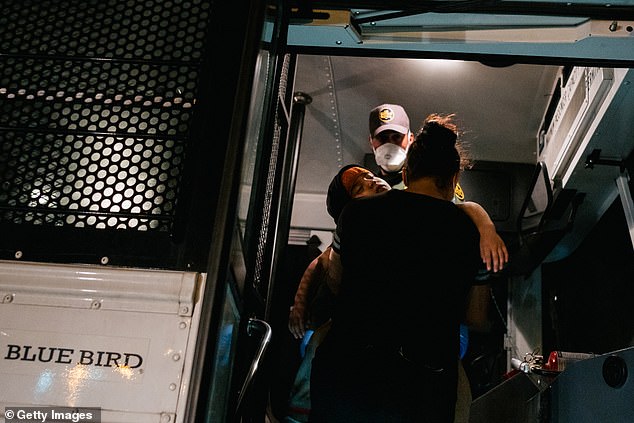 Another 17-year-old Guatemalan girl at the Fort Bliss emergency facility said in a declaration dated April 28 that she sleeps on a stacked cot in extreme close quarters under a large white tent with about 300 other girls.

She detailed sleeping difficulties due to rattling noises from the tent’s metal beams and said the tents are cold at night and filled with dirt.

‘A lot of the girls here cry a lot,’ she said. ‘A lot of them end up having to talk to someone because they have thoughts of cutting themselves.’

The testimonials offer a deeper look into the conditions of emergency shelters set up by Biden’s administration to deal with the continuing migration crisis at the southern border.

Since the start of his administration, there has been a sharp influx of migrants crossing illegally into the U.S. – in particular unaccompanied minors, who Biden promised not to turn away at the border.

In May, U.S. Customs and Border Protection encountered 180,034 illegal crossers at the southern border, the most of any month so far and an uptick from the previous high of 178,854 who were encountered in April.

In recent months, children have been more swiftly removed from CBP custody into these emergency shelters in an effort to more quickly reconnect them with family members or others in the U.S.