Migrants entering British waters across the Channel will have their dinghies ‘disabled by nets’ before being sent back to France.

Dan O’Mahoney, the new Clandestine Channel Threat Commander, has set out his four-stage plan in a bid to clamp down on illegal crossings.

The former marine has reportedly confirmed how UK authorities are poised to deploy a ‘safe return tactic’.

The move comes after it emerged that more than 7,100 migrants have reached the UK in this year alone. 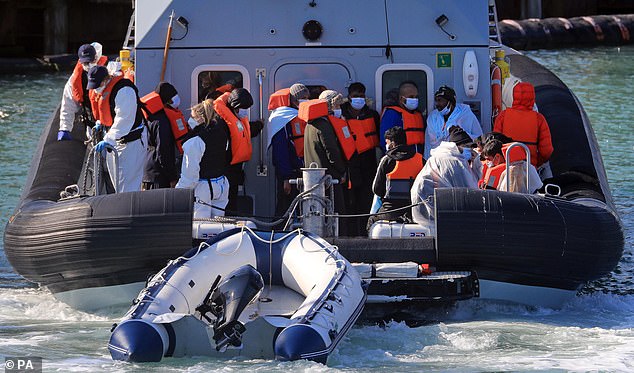 Migrants entering British waters across the Channel will have their dinghies ‘disabled by nets’ before being sent back to France. Pictured: One group of people being brought into Dover, Kent, by Border Force in the Channel on Friday

The four-stage plan to clamp down on illegal crossings

In an interview with The Sunday Telegraph, Mr O’Mahoney said that personnel would render migrant boats inoperable before using British vessels to ferry the occupants back to France.

The method is similar to that trialled by the Royal Navy to clog boat propellers to force an immediate stop.

Mr O’Mahoney, who Home Secretary Priti Patel appointed in August, said: ‘We are exploring tactics to make safe interventions, in order to return migrants back to France…

‘We definitely are very, very close to being able to operationalise a safe return tactic where we make an intervention safely on a migrant vessel, take migrants on board our vessel and then take them back to France.’

He added that this tactic was just one of many ‘which we may deploy over the next few months’.

The number of clandestine arrivals is currently exceeding 300 per day – the greatest numbers on record – after a sharp decrease in air and rail travel by air amid the coronavirus pandemic.

But the implementation of the new method will likely be delayed as France is currently refusing to take back migrants.

Mr O’Mahoney also told the publication that the Government was using social media campaigns and officials posted abroad to urge would-be migrants travelling from Africa and the Middle East to claim asylum in the first safe country in which they arrive.

It is hoped that this would deter them from risking their lives in an ‘incredibly dangerous journey’ across the world’s busiest shipping lane to reach the UK illegally.

Mr O’Mahoney insisted that his team’s first priority is still to save the lives of those put at risk by attempting to make the crossing.

But added that this objective was closely followed by focusing on securing the UK border and increasing public confidence in the operations. 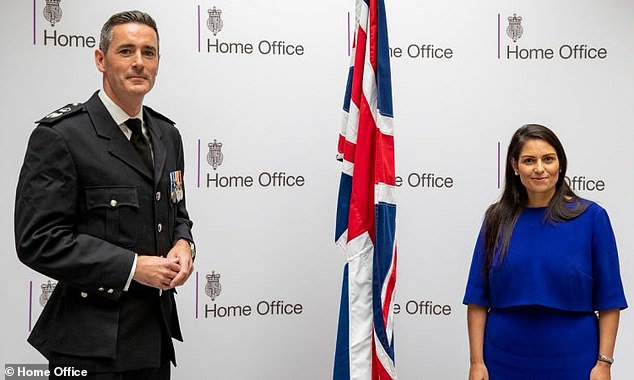 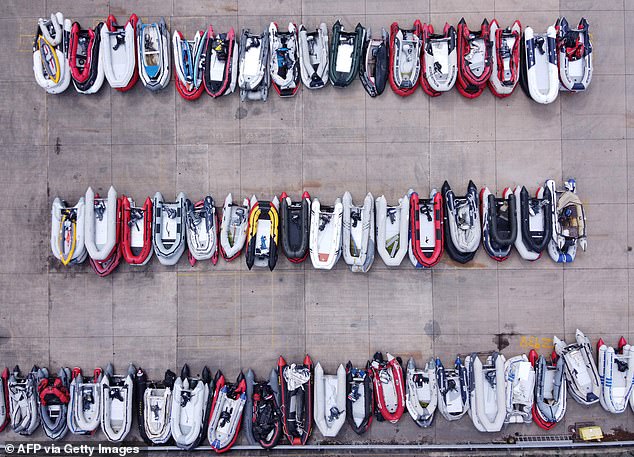 The number of clandestine arrivals is currently exceeding 300 per day – the greatest numbers on record – after a sharp decrease in air and rail travel by air amid the coronavirus pandemic. Pictured: Dinghies, believed to have been used by migrants, stored in a Port Authority yard in Dover

The interview comes just days after proposals being worked on by the Home Office suggested migrants attempting to cross the Channel could be held on disused ferries.

Government sources had insisted the ideas – which were leaked last week – were only part of a brainstorming session.

But a source told The Sun: ‘There is a real determination to tackle this problem and things are now moving forward. The ferry plan is on. It’s happening.’

Officials were told to begin discussions about buying two unused boats to turn into processing centres and keep off the coast of Portsmouth, sources said.

Some £6million could buy the Home Office a 40-year-old ferry which could house 1,400 asylum seekers, The Times reported.

Approval to house migrants in ferries has not been granted, a Home Office spokesperson said.