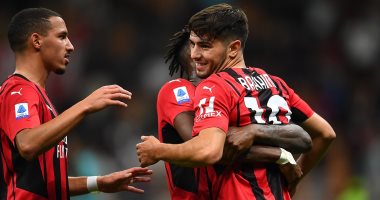 The Italian club AC Milan seeks to achieve its first victory in the Champions League when it hosts Atletico Madrid, tomorrow, Tuesday, to achieve the absentee victory for 2,864 days, as the team’s last victory over Celtic was with three clean goals in the group stage, on November 26, 2013.

The San Siro stadium, the Italian stronghold of Milan, will host the team’s confrontation with its Spanish counterpart, at nine o’clock tomorrow evening, Cairo time.

Milan is looking for victory, taking advantage of the ground and the public, and to collect the first 3 points in the group, after suffering a loss in the last match, against its host Liverpool, 3-2..

The two teams are seeking to achieve the first victory in the group after they stumbled during the first round of the group stage this season, as Milan lost to Liverpool 3-2, while Atletico Madrid drew with its guest, Porto, 0-0..

Milan coach Stefano Pioli spoke about facing Atletico Madrid, saying: “Simeone’s sons are very technical, they are the title holders and they are a very strong team with a high-level coach and international players, but we pushed one by seeking to win.”

Pioli added, “We learned that some small details make the difference in these matches. We conceded goals at Anfield, Liverpool, because of recklessness and technical errors. We need a culture of playing at the highest levels, playing in a direct and easy way, and being fast without making mistakes because the opponent can punish you in any time”.

The Milan coach continued, “We are talking about a team that played the Champions League finals and also beat Barcelona and Real Madrid, and therefore the confrontation will not be easy, and we must not make mistakes against them because they will punish us quickly.”

And it was confirmed the absence of Swedish star Zlatan Ibrahimovic, Milan striker, from the Rossoneri against Atletico Madrid. Zlatan Ibrahimovic suffers from an Achilles tendon injury, which he suffered during the Lazio match in the third round of the Italian League, which is the only meeting in which the Swedish star participated with the Lombardy this season.