A $1 million reward is on offer to solve one of Australia’s most notorious unsolved crimes – the suspected murder of heiress Juanita Nielsen.

Ms Nielson, 38, a newspaper publisher disappeared from the centre of Sydney’s seedy underbelly 46 years ago.

She owned alternative paper NOW which she used to campaign against developers to protect heritage buildings in Potts Point and promote the Builders Labourers Federation’s controversial green bans during the 1970s. 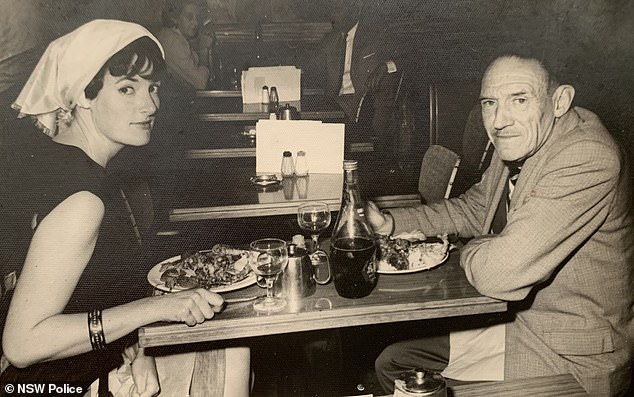 Juanita Nielsen (pictured) walked into a Kings Cross club in 1975. She was never seen again

Ms Nielson was the great-granddaughter of businessman Mark Foy and an heiress to his retail empire, whose department store building now encases the Downing Centre court complex.

But on the morning of July 4, 1975, she walked into the Carousel Cabaret – a Kings Cross nightclub run by an associate of notorious underworld crime boss Abe Saffron – and was never seen again.

Her handbag was found on the side of a highway leading to the Blue Mountains, west of Sydney’s CBD, eight days later.

It is widely believed she was kidnapped and murdered because of her anti-development and anti-corruption campaigns, with a coronial inquiry in 1983 finding Ms Nielson was likely dead.

But despite the case generating extraordinary publicity, her remains have never been found. 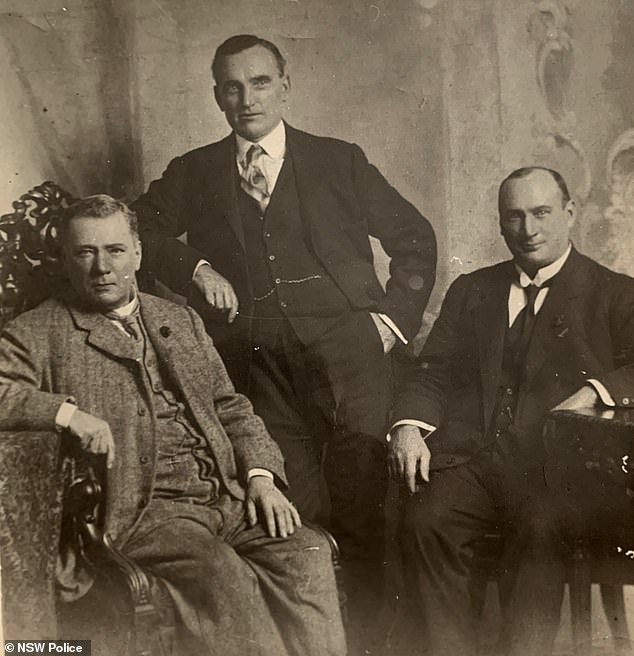 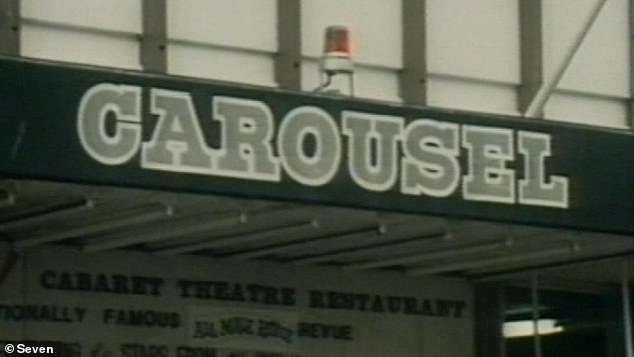 After more than four decades of heartbreak, her family just wants to give her a proper burial.

Her cousin Francis Foy has appealed for information into her suspected murder, as police announced the reward had been doubled to $1 million.

‘Juanita was very much loved by her family and very much missed,’ Mr Foy said on Monday.

‘Her disappearance and the unknown of what happened to her caused incredible pain for her family.’

‘In turn, it has also become difficult for police to target known persons of interest or associates due to their passing,’ he said in a statement.

‘However, it is our hope that someone in the community may have information about Juanita’s disappearance, or the location of her remains.’

In the 1970s, construction projects were dominated by powerful unions like the Builders Labourers Federation, which shut down dozens of projects to protect heritage and locals from greedy developers. 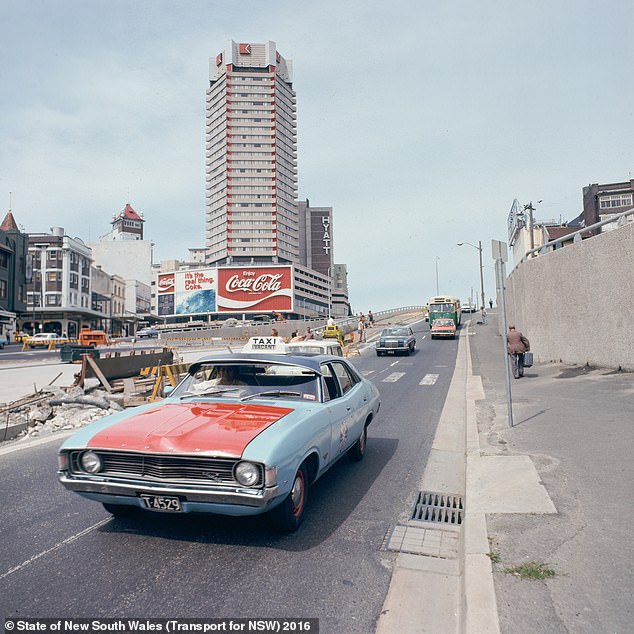 Construction projects at the time were dominated by powerful unions which acted to protect heritage sites from developers. Pictured: An XY Ford Falcon Sydney RSL Taxi travels westbound on William Street, near the Victoria Street western portal bridge, during construction work on the Kings Cross Tunnel in 1971, which now part of the Cross City Tunnel

One of the most famous ‘green bans’ was to protect 19th Century terrace houses on Victoria Road in Potts Point from demolition by developer Frank Theeman to build apartments.

His henchmen, led by disgraced former NSW police detective Frank Krahe, regularly harassed residents to intimidate them to sell up and leave.

The bitter campaign waged for years and saw resident’s association president Arthur King kidnapped and held hostage for three days and the union’s NSW branch broken up – but was ultimately successful.

Ms Nielsen was one of the last advocates for residents left, and frustrated developers who had bought $6 million worth of property (almost $40 million today) and were burning $3,000 a week on interest payments.

Weeks before her disappearance, Ms Nielsen was invited to the Carousel Club, the manager of which, James Anderson, owed $260,000 to Mr Theeman, for a press event.

She did not attend, nor did she show up to a meeting to discuss advertising in NOW because she was suspicious – the club had never expressed any interest before.

On June 30, 1975, Carousel employees Edward Trigg and Shayne Martin-Simmonds visited Ms Nielsen’s home on the pretense of asking about advertising – but their plan was to snatch her if she was alone.

‘Just grab her arms and stop her calling out, no real rough stuff, no gangster stuff. We thought that just two guys telling her to come would be enough to make her think if she didn’t come she might get hurt,’ Martin-Simmonds admitted in 1977.

‘We talked about when she came into the room, one of us would be standing there and the other one would come up behind her and just quietly grab her by the arms and maybe put a hand over her mouth or a pillowslip over the head.’ 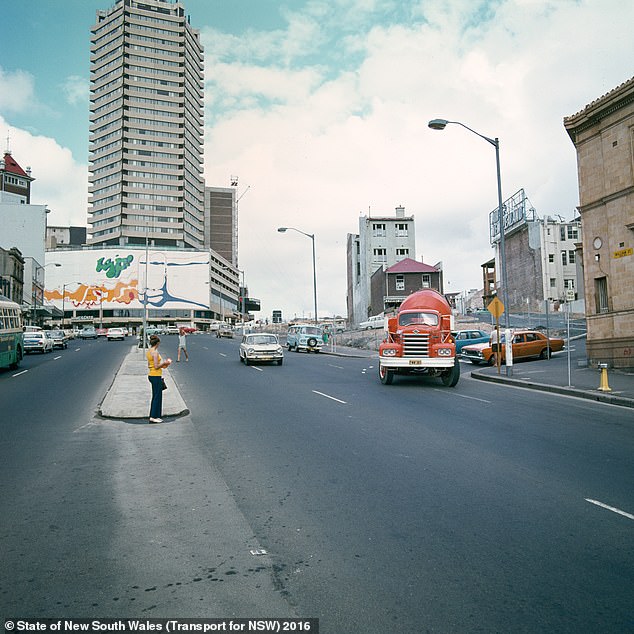 A view of William Street in Darlinghurst, looking east towards the Kingsgate Hotel during construction work on the Kings Cross Tunnel in 1971

Ms Nielsen’s friend David Farrell instead answered the door, with their intended target listening from the next room.

Finally on July 3 she agreed to a meeting at the club the next day, calling the next morning to advise she was running late because she was hungover. She was never seen again.

Carousel receptionist Loretta Crawford changed her version of what happened that day several times, eventually claiming after Mr Anderson’s death that she was shot.

She told the ABC that Ms Nielsen was shot dead in the club’s basement and she saw her body lying on the ground with a single bullet hole in her head with Trigg and Martin-Simmonds standing over her, with a third man holding a pistol.

In 1983, the coroner investigating the circumstances around Ms Nielsen’s death found ‘evidence to show that the police inquiries were inhibited by an atmosphere of corruption, real or imagined, that existed at the time’.

In the 1980s, the Sydney City Council turned her former residence in Woolloomooloo into a recreation hub, called the Juanita Nielsen Community Centre.