Millionaire Papa John’s franchisee suspected of £250,000 Eat Out to Help Out scam


A millionaire takeaway pizza chain tycoon is suspected of stealing more than £250,000 of taxpayers’ cash by claiming fake Eat Out to Help Out meals, the Daily Mail can reveal.

Raheel Choudhary, who owns 61 Papa John’s franchise restaurants, instructed staff to record thousands of ‘phantom covers’ while the Government scheme was running, according to whistleblowers and sales reports seen by the Mail.

He is the US giant’s largest UK franchisee. Because these non-existent meals were classed as ‘Eat Out to Help Out’, the taxpayer paid half the bill.

Most of his restaurants were not even eligible for the offer – which required diners to eat in – because they were collection and delivery only.

Papa John’s head office, which had told Mr Choudhary not to take part in the scheme, launched an urgent probe after being alerted by the Mail. 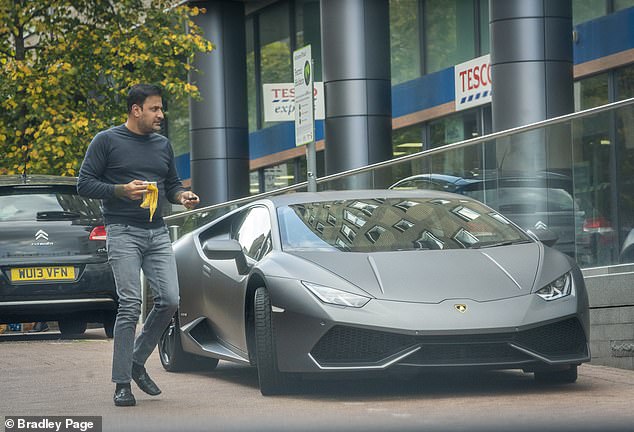 Raheel Choudhary, pictured with his Lamborghini, is the UK’s biggest franchisee of Papa John’s restaurants – but he is suspected of pocketing £250,000 of taxpayers’ money

Last night, fraud experts warned the suspected scam was the ‘tip of the iceberg’, and highlighted how easily Government coronavirus schemes could be exploited, costing taxpayers billions of pounds.

Mr Choudhary promised his managers bonuses for putting in large numbers of the fake orders.

Whistleblowers say he was was driven by ‘greed’ as his franchises had already seen a surge in business during the first virus wave as more people ordered takeaways. Workers who raised objections were threatened with the sack or reduced hours if they spoke out.

Because there was no revenue from the fake meals, staff were told to record the ‘payments’ as vouchers. 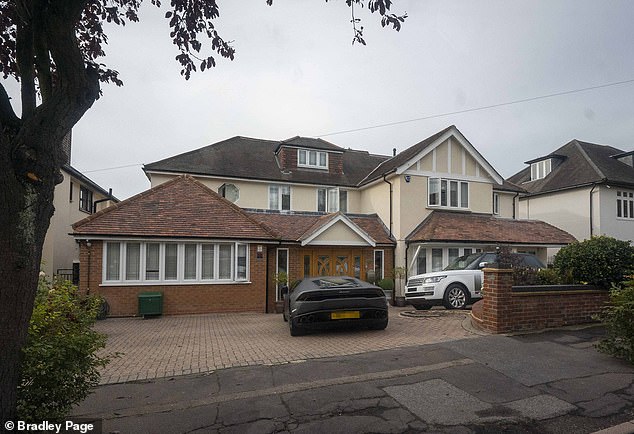 Choudhary lives in a £1.6million house in Woodford Green, London. Sales reports suggest five of his branches recorded more than 1,700 Eat Out to Help Out orders, despite the fact not a single customer was recorded as having ‘dined in’

Sales reports seen by the Mail suggest the number of voucher payments in five of his branches alone went from almost zero in the two months before the scheme to more than £23,000 while it was under way.

The same branches, which did not allow dining it, recorded more than 1,700 Eat Out to Help Out orders, despite the documents showing that not a single customer was recorded as having ‘dined in’ during this period.

Whistleblowers say this continued through most of his empire, meaning the total falsely claimed would be more than £250,000.

Under the scheme to boost the struggling hospitality industry, which ran Mondays to Wednesdays from August 3–31, diners got up to half of their meal free up to £10 per customer if they ate at participating restaurants.

Takeaways and deliveries were excluded.

Papa John’s runs a franchise system, meaning individual franchisees such as Mr Choudhary – and not Papa John’s – are responsible for the running and management of the restaurants.

Before the start of the scheme, Papa John’s head office told Mr Choudhary and other franchisees not to register for Eat Out To Help Out, since the great majority of stores are takeaway and delivery only and too small for customers to eat in and socially distance.

But the Mail has spoken to four staff working for his Papa John’s franchises who said he exploited the scheme to run a ‘massive scam’.

Managers were promised bonuses for hitting targets of fake claims worth £500-600 a day for branches with weekly turnovers of under £10,000.

One manager said: ‘It was pure greed. He didn’t need extra money. His franchises were doing very well during coronavirus, because more people were ordering takeaways.

‘Anyone who raised concerns got sacked or warned they would have their hours cut.

‘The staff are on zero hours contracts, so they had no rights.’ 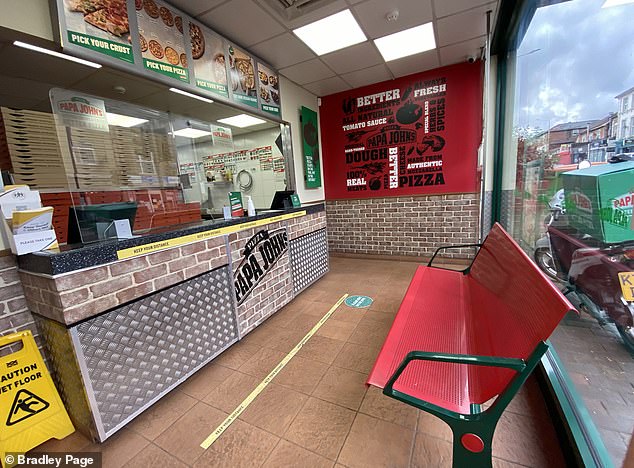 Many of the Papa John’s restaurants, including one in Southborough, Tunbridge Wells, did not even have space for customers to eat in – meaning they were not eligible for the Eat Out to Help Out scheme

Mr Choudhary’s operations manager sent a message to the WhatsApp ‘management group’ on August 3, the day Eat Out to Help Out started, saying: ‘EAT OUT SCHEME.

‘We are listed as participating in this scheme but NOT PROMOTING IT so only honour those orders where customers walk in and specifically enquire as PJs [Papa John’s head office] are not supporting us with this.’

In the first week of the scheme a few Eat Out to Help Out orders were put through, but early in the second week of August, Mr Choudhary told managers they needed to ‘take advantage’ of the offer, whistleblowers said.

Tycoon with £1.6m home – and fast cars on driveway

He is the poster boy for the Papa John’s franchise model, paraded in the media as an example of how a hard-working and determined franchisee can become a multimillionaire tycoon.

Raheel Choudhary’s extraordinary rags to riches story even led the company’s bosses to fly him to the US so that the global pizza chain’s founder, John Schnatter, could congratulate him in person.

From humble beginnings, the 43-year-old businessman now has 61 franchises with a turnover of millions of pounds a year and a lifestyle to match.

Wearing Louis Vuitton shoes and a Rolex watch, he zips to his office in Canary Wharf in a matte grey Lamborghini before returning to his £1.6million family home in north London where a Tesla Model X and Range Rover are also parked on the driveway.

Papa John’s has capitalised on his achievements and – until now – regularly highlighted his success story.

A profile of him on the website of the British Franchise Association gave a glowing account of his life, describing how he started helping in his Pakistan-born father’s east London dry cleaning business before he turned ten.

At the age of 25, without any fast food experience, he opened his first Papa John’s franchise in Grays, Essex, and through hard work and grit slowly built up his business empire.

He was quoted as saying: ‘Running my first store was a real learning curve because I rolled my sleeves up and got to know all aspects of my business.

‘I think this was the key to my success, and I would advise any new franchise owner to follow my example. If you want to be a cut above the rest, you need to earn your crust through passion and hard graft.’

In 2007 he appeared in the Daily Mail as a case study in an article about franchises.

Pictured holding pizza in one of his restaurant branches, he told the paper: ‘You must excel – bog standard outlets would not survive.’

Mr Choudhary added: ‘The food industry has more regulations than most, but the franchisor keeps us up to date with them, leaving us free to make money.’

The tycoon runs his business through a myriad of companies, having been a director at least 27, some for just a few months or even days before resigning.

This, they say, involved putting through fake orders. Because there was no revenue from these nonexistent customers, the ‘payments’ were recorded on the Papa John’s computer system as being made in vouchers, something staff say they had never done before.

The Mail has seen three-quarters of the sales reports for five of his branches from June to mid-September as well as discount reports during Eat Out to Help Out.

Prior to the launch of the discount, staff said they never recorded payments as ‘vouchers’ and almost none appear in the reports in June and July.

But there was a massive surge in voucher payments that correlate with Eat Out to Help Out orders.

The corresponding week in the previous month had no voucher payments.

The West Norwood branch in south London recorded just £44.96 payments in vouchers in July but £6,900.18 during the offer in August.

On September 7 – the start of the first full week after the scheme ended – Mr Choudhary’s operations manager sent another message to managers in an apparent attempt to cover up the surge in voucher payments.

It said: ‘Hi All, From immediate effect all cash orders to be processed as voucher until further notice. Please let your teams know.

‘Everyon [sic] please confirm on this group that you understood this message.’

Our investigation comes after revelations taxpayers are facing up to £26billion loses from fast-track virus loans to small businesses that are stolen by fraudsters.

David Clarke, chairman of the Fraud Advisory Panel charity, said it showed the Government lacked the technology to stop scams.

He said: ‘Money had to get out fast to save good companies devastated by the pandemic but we need advance tech in place to make sure it doesn’t go to bad people.’

Michael Levi, professor of criminology at Cardiff University, said: ‘The lack of checks and transparency for these schemes means there is a huge potential for abuse. You need boots on the ground to follow up on suspected scams before the money has disappeared.’

When approached, Mr Choudhary denied his stores displayed posters saying only one customer must enter at a time, despite the Mail having photos of them.

He declined to address the allegations of thousands of fake orders, but later said that the 40 of his 61 franchises that have ‘seating capacity’ took part in Eat Out to Help Out, which accounted for 6 per cent of his August turnover.

He added: ‘All customers who benefitted from the scheme ate in store and we are confident that we were fully compliant with the criteria set by the Government.’

A spokesman for Papa John’s said: ‘We are investigating these allegations thoroughly and we will be extremely concerned and disappointed if they prove to be true.

‘All of Papa John’s UK stores are run by franchisees and we made it very clear to all franchisees that we felt it unlikely that they would be eligible to participate in Eat Out To Help Out.

‘It is important that our investigation is completed fully before drawing any conclusions, but if any franchisee participated improperly in EOTHO, they will have been in breach of their franchise agreement with us, and we will require them to make things right.’

The Mail has offered to show HMRC its evidence. It said it would check claims and take action to recover any payments found to be dishonest or inaccurate.

A Treasury spokesman said: ‘We targeted our unprecedented support to help those who need it most as quickly as possible and we won’t apologise for this.’