Millwall 0-1 Derby: Wayne Rooney gets his FIRST win since taking interim charge thanks to Jason Knight’s strike… but game is overshadowed by fans BOOING as players took a knee in support of anti-racism movement

Wayne Rooney’s first win in interim charge of Derby was overshadowed by a section of Millwall fans booing when the players took the knee.

Jason Knight’s strike was enough to ensure Millwall suffered back-to-back defeats and the 1-0 victory was the Rams’ second win of the campaign.

But as Millwall welcomed back 2,000 fans to the Den for the first time since February after the lifting of England’s second lockdown, it will be remembered for the pre-match reaction as the players took the knee in support of the Black Lives Matter movement. 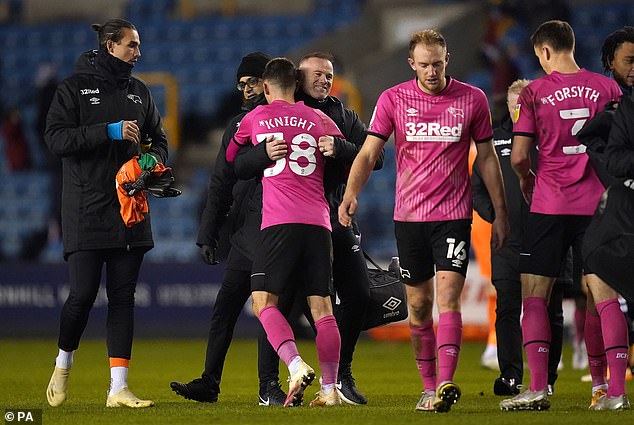 A number of fans can clearly be heard booing on video posted on social media. When the game started, the visitors created the first meaningful attempt as winger Kamil Jozwiak’s long-range strike drifted wide.

Millwall came close to taking the lead moments later thanks to some individual brilliance from Jed Wallace. After receiving Matt Smith’s drilled pass on the halfway line, Wallace used his pace to beat central defenders Matthew Clarke and Curtis Davies only for David Marshall to make a stunning save.

Ben Thompson then scooped an effort over the crossbar having been found by a fine Mahlon Romeo cross as the home side continued to search for the opener. Derby responded with Knight being frustrated by a vital block before Graeme Shinnie blazed over the crossbar with a 30-yard drive.

Smith nearly gave Millwall the lead nine minutes after the break. Wallace evaded Craig Forsyth, leaving the Derby left-back grounded, and stood a teasing cross up for Smith to attack.

However, the former QPR and Fulham frontman’s header from close range was tame and Marshall was able to make a comfortable save to keep the home side at bay. Millwall boss Gary Rowett upped the ante by bringing Tottenham loanee Troy Parrott off the bench and the Republic of Ireland international immediately forced Marshall into a save.

Jake Cooper then nodded a Shane Ferguson cross wide as the Lions continued to be frustrated in their efforts to make the breakthrough. Despite Millwall’s attacking threat, Derby broke the deadlock with 69 minutes on the clock.

A teasing cross found substitute Martyn Waghorn and although his header was kept out by goalkeeper Bartosz Bialkowski, Knight was on hand to sweep home the rebound. Waghorn then passed up an opportunity to double the Rams’ lead when his long-range attempt was blocked.

Millwall pushed for a leveller and felt they should have been awarded a penalty when Parrott went down under a challenge, but the referee waved away the appeals as the home side’s hopes of a point quickly evaporated. Derby were able to hold on to their lead and boost their hopes of avoiding the drop with a crucial win at The Den, though they remain in the bottom three after 16 Championship games.

'Havana Syndrome' - could be the result of a microwave energy weapon, says new report

Michigan DTE energy outage: A minimum of 125,000 prospects left with out electrical energy after suspected tornadoes and extreme storms