Millwall supporters booed their own players while they took the knee in support of the fight against racism in disgraceful scenes at The Den this afternoon.

The day marked the first time that fans were able to attend a game in person since lockdown began in March – and since footballers started to take the knee before games, which became a feature of matches once they were resumed again, and following the rise of the Black Lives Matter movement.

As their match against Derby County was about to begin, video footage taken from the ground shows that there were a large number of aggressive boos from the stands as the players took the knee. The scenes have sent shockwaves through the game, with players, pundits and fans all condemning the actions of the Millwall fans.

On Twitter, a Millwall fan, Chris Elliott, said ‘I feel disappointed disgusted and ashamed’ at the actions of his fellow supporters.

Former Nottingham Forest and Cardiff footballer Greg Halford also criticised the fans, saying: ‘What am I seeing at the Millwall game. The players take the knee and the 2000 fans are booing. The efl have to be strong and take serious action against this. Everytime I’ve played there ive heard a form of racist abuse this has got to stop.’

Players have been taking a knee since July and Gary Rowett and his squad confirmed they would continue the gesture in a statement earlier this week.

There had calls on the club to abandon the ritual, as a handful of other Championship sides have done, but Rowett and his squad said it was their duty to reinforce the positive messaging in the fight against racism.

The statement released by Millwall read: ‘We are fully supportive of the efforts in ridding the sport, and society, of all forms of discrimination.

‘It is our duty to reinforce the positive messaging.

‘Taking the knee, for us, is in no way representative of any agreement with political messaging or ideology. 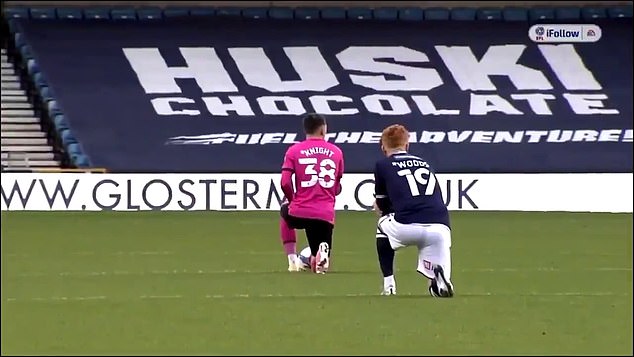 ‘It is purely about tackling discrimination.’

Players originally started taking the knee when the 2019-2020 season resumed in June after the death of black American George Floyd at the hands of a white police officer.

This was done in support of the Black Lives Matter movement with that slogan also appearing on players’ shirts.

However, the Premier League and EFL made the decision to replace the BLM slogan on shirts after growing concerns the movement has been hijacked by extremists.

Players in the Premier League now wear ‘No Room for Racism’ while EFL shirts bear the message ‘Not Today or Any Day’ in support of their ongoing campaign against all forms of discrimination.

Queens Park Rangers made the decision to stop taking the knee in September with director of football Les Ferdinand saying the gesture had ‘reached a point of “good PR” but little more than that’.

He added: ‘Taking the knee was very powerful but we feel that impact has now been diluted.

‘In the same way ‘Clap For Carers’ was very emotional for us all, it got to a stage where it had run its natural course and the decision was rightly made to stop it.

‘No one is more passionate than me about this topic. I have spoken on the matter throughout my footballing life.

‘I work for one of the most diverse football clubs in this country. A lot of people are being fooled out there.

‘What are our plans with this? Will people be happy for players to take the knee for the next 10 years but see no actual progress made?

‘Taking the knee will not bring about change in the game – actions will.’

The EFL decided to allow individual players and teams in the Football League to make their own decision on whether to continue taking the knee while the gesture still takes place in the Premier League.

Coventry are another team who have opted not to take a knee this season.

Thieves stole grapes from Canadian vineyard the night before harvest