Doctors have called on the Government to divert the millions of pounds spent on the private firms behind the bungling NHS Test and Trace system to local health teams instead.

The group claim ministers have overlooked the proven ability of local health teams in containing disease outbreaks, in favour of a centralised approach reliant on private firms with costly contracts.

Regional public health workers are used to tracing people to warn them they may have a sexually transmitted disease, or eaten at a restaurant with a food poisoning outbreak.

But it was commercial companies such as Serco, Capita, Sitel and Deloitte that won contracts to help with building the test and trace system, which is performing worse every week.

A new commentary piece published in the Journal of the Royal Society of Medicine calls for a ‘new strategy’ for the Test and Trace programme, which the experts claim would help fix a fragmented contact tracing system and boost its success.

They academics wrote: ‘We call on the Westminster government to end privatisation of testing… and redirect the resources from the current private testing programmes back into the local primary care, local NHS labs and local public health sector.’

In places where local health chiefs have taken the reigns, tracers have managed to reach nearly twice as many close contacts with a ‘boots on ground’ approach as call-handlers hired by the Government.

It comes amid fresh calls for the sacking of Baroness Dido Harding — the head of NHS Test and Trace and previously chief executive of the phone company TalkTalk.

Since its launch in May, the NHS Test and Trace has been criticised by scientists and MPs alike for failing to reach the ‘world beating’ standard promised by the Prime Minister.

Last week Boris Johnson finally admitted that improvements were needed after it was revealed that just one in seven people are are getting their result back in 24 hours. A robust test and trace system is imperative to stopping the spread of the coronavirus. 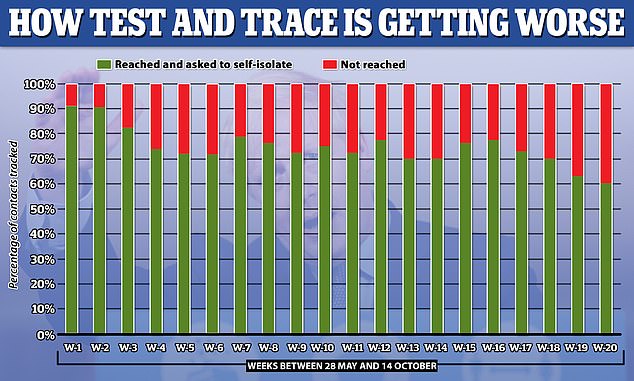 Damning statistics published by the Government on Thursday showed NHS Test and Trace only tracked down 59 per cent of close contacts of people who tested positive for the virus in the week up to October 14. It’s the lowest weekly percentage since the scheme was launched in May 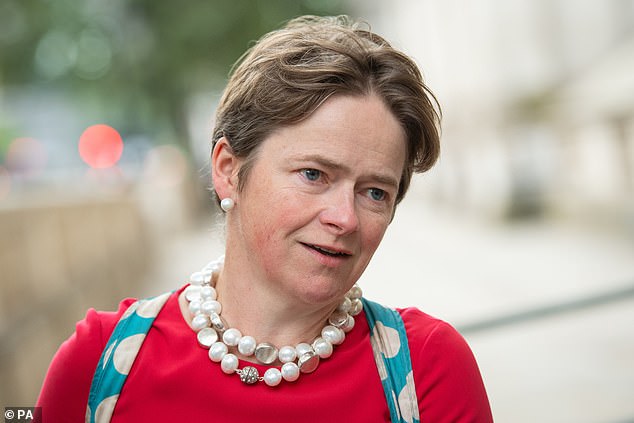 Dr Louisa Harding-Edgar, of the Institute of Health and Wellbeing at the University of Glasgow, and colleagues said that a new strategy for testing and tracing coronavirus cases was needed in England.

They argued: ‘Primary care services across the UK were excluded from management and care of Covid patients at the start of the epidemic.

‘We call on the Westminster government to end privatisation of testing and to reinstate and invest in NHS primary care, public health, and NHS laboratory services.

Plans to test 10million people a day would see see tens of thousands of people self-isolating needlessly, experts have warned.

Boris Johnson revealed he wanted to carry out millions of tests a day as part of a highly ambitious strategy known as ‘Operation Moonshot’.

Experts warned that the plans were ‘fundamentally flawed’ and even dangerous as the tests can wrongly tell people they are either positive or negative.

Academics have said that under the plans around 10,000 people could receive a false positive each day.

This will result in ‘unnecessary isolation and hardship’ for these people and thousands more of their contacts, they said.

A new commentary piece published in the Journal of the Royal Society of Medicine calls for a ‘new strategy’ for the Test and Trace programme.

And now researchers from the universities of Glasgow, St Andrews and Newcastle say it’s time for it to be overhauled with more control for local authorities.

‘Without local public health and general practice expertise, it [the contact tracing system] will continue to be ineﬀective.’

The process of contact tracing – identifying people who have been in close contact with a Covid-19 case and telling them to self-isolate – was handed over to privatised call handling centres run by Serco and Sital.

NHS Test and Trace data, released every week, give an indication of how well the system is working, with the key system producing underwhelming performance statistics week-on-week.

Figures published last Thursday showed that the proportion of close contacts being reached had dropped to 59.6 per cent – the lowest since the system was launched in May.

For cases handled either online or by call centres, 57.6 per cent of contacts were reached and asked to self isolate in the week to October 14.

But for cases handled by local health protection teams, the figure was 94.8 per cent.

This pattern has been evident for months, proving a knock-on-door approach by on-the-ground health teams is much more successful in tracking potential Covid-19 cases down.

Dr Harding-Edgar wrote: ‘In a localised outbreak in north England [Blackburn with Darwen], centralised contact tracing reached only 50 per cent of close contacts.

‘But once given adequate information on people with positive test results, local public health teams set up their own contact tracing teams.’

The local Director of Public Health Dominic Harrison tweeted in August that ‘we are now managing to contact 9/10 of the cases the national system could not contact’.

The NHS data also shows testing performance has continued to slide, with just one in seven people having an ‘in-person’ test, such as at a drive-through, getting their result back in 24 hours in the week to October 14.

Dr Harding-Edgar and colleagues say ‘one of the key failures’ in the pandemic response was the government’s decision to take testing responsibility away from public health services.

It warned that setting up instead within the private sector has led to disjointed communication of up-to-date data on who, and where, coronavirus cases are in local authorities. 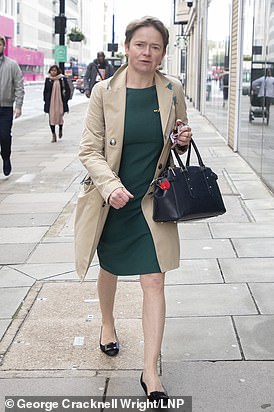 Business Minister Nadhim Zahawi has today rushed to the aid of Baroness Dido Harding — the boss of England’s beleaguered test and trace system — amid mounting calls for her to step aside because the shambolic system keeps getting worse.

Mr Zahawi insisted the Conservative peer is ‘doing a very difficult job really well’ and working 19-hour days, seven days a week to ensure she stays on top of the virus.

‘I think she is doing a very difficult job really well,’ he said on Sky News this morning. ‘I’ll tell you why because I sit on the local action committee goal where we go through the data on test and trace and how well the system is working.’

Stumbling over his words, he added: ‘I think Dido has led the team in an incredible way, she’s working seven days a week, 19-hour days. This is a joint effort by many, many, people to be commended who work with Dido and are delivering the test and trace system.’

The former head of TalkTalk, who is married to Conservative MP John Penrose, was appointed to run the so-called ‘world-beating’ test and trace system by Health Secretary Matt Hancock in May.

It is supposed to be a major weapon in the Government’s arsenal of anti-coronavirus measures because it is designed to halt an outbreak in its tracks.

But under her leadership the service has lurched from disaster to disaster, and last week registered another record-low performance.

This made it more difficult for local public health directors to understand the size of outbreaks in their communities, which would delay controlling them, the editorial said.

It added: ‘Despite the failings of this largely private, highly centralised NHS Test and Trace system, it has been reported that the government intends to scale up testing to deliver weekly tests for the whole population.

‘Deloitte and a slew of commercial companies are being contracted to deliver them under Operation Moonshot, a plan to ramp up tests to 10million a day, at a cost of 100billion pounds – 70 per cent of the annual NHS budget for England.’

Labour’s Justin Madders said last week it was time for ministers to admit that the private companies being paid millions of pounds to help run the system ‘aren’t up to the job’ following the latest set of NHS Test and Trace figures, which showed the beleaguered system is catching just 59 per cent of close contacts.

The Government’s scientists have repeatedly said eight in 10 contacts must be tracked and isolated for the whole system to work.

Shadow health minister Mr Madders said: ‘To have over 40 per cent of people not even being contacted by the test and trace system is an interstellar sized black hole in the Government’s plan to reduce transmission.

‘How much longer are we expected to put up with this dangerous failure before ministers admit that the likes of Serco just aren’t up to the job?

‘The need for a circuit break is absolutely critical now and that time should be used to fix test and trace once and for all.’

He told MailOnline: ‘The evidence is there from public health teams handling local outbreaks in care homes and workplaces and from how this is being managed in Wales and Scotland.

‘Local GPs and public health teams know their areas well and have a better approach to effective communication. They also have experience of contact tracing for sexually transmitted infections so there’s no need to reinvent the wheel. Just provide the right investment.

‘There is also capacity within local NHS labs to more efficiently run the tests and feedback to local teams so that contacts can be traced more rapidly and supported to isolate.

‘As for the government’s preference for private companies – who knows? They may have more confidence (false confidence) in the ability of these companies to handle the logistics associated with managing large amounts of testing and tracing. There is a tendency in many organisations, including governments, to think that external private consultants are better than their own people.’

Boris Johnson last week said he shared people’s ‘frustrations’ with the test and trace system and said there needed to be faster turnaround times for test results.

The Prime Minister told the Downing Street press conference on Thursday: ‘I share people’s frustrations and I understand totally why we do need to see faster turnaround times and we need to improve it.

‘We need to make sure that people who do get a positive test self-isolate – that’s absolutely crucial if this thing is going to work in the way that it can.’

The Government’s chief scientific adviser Sir Patrick Vallance said it is ‘very clear’ that there is ‘room for improvement’.

He told the press briefing: ‘It’s undoubtedly the case that test, trace and isolation becomes much more difficult to have an impact once numbers are high, it’s much more effective when numbers are low.’ 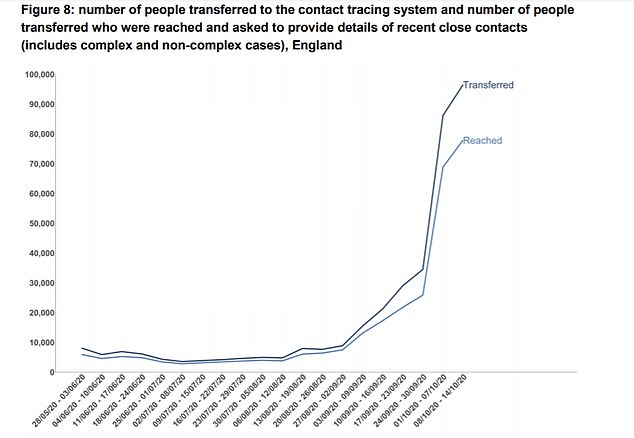 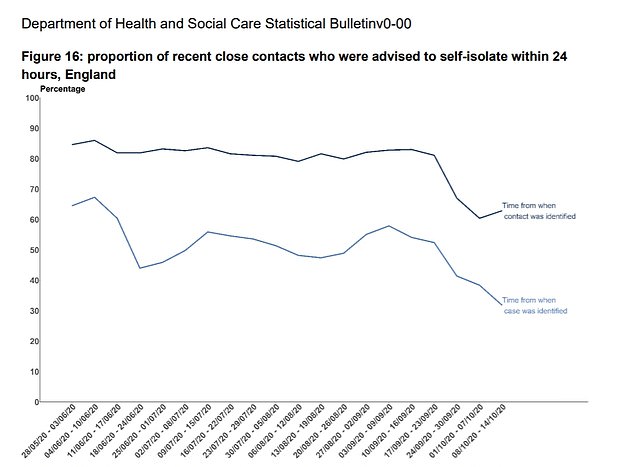 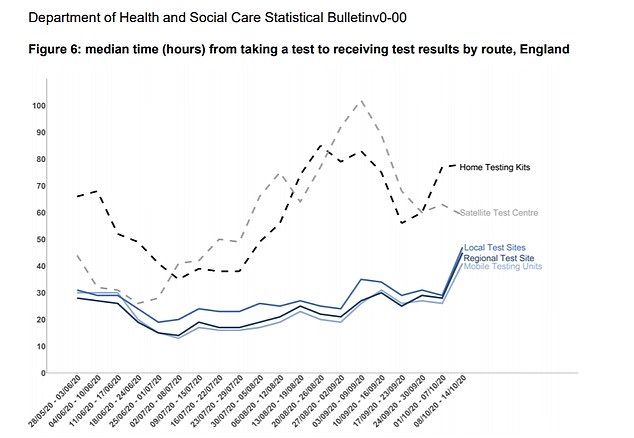 SAGE experts warn second wave will be deadlier than the first