The ‘Miracle on Ice’ captain has hit back at an Olympic athlete for threatening to burn the American flag on the podium, saying destroying the flag is ‘disgusting’.

Mike Eruzione, 66, said he thought it was a prank when he first heard that BMX freestyle rider Chelsea Wolfe said wanted to win at the Olympics so she could burn the American flag on the podium.

The former ice hockey player, who scored the winning goal to defeat the Soviet Union hockey team in 1980 in the famous ‘Miracle on Ice’ game, said he was baffled by her remark as he considers competing at the Olympics to be the ‘ultimate honor’.

Speaking on Fox and Friends on Tuesday, he explained: ‘I actually couldn’t believe it. I mean, first of all, burning the American flag anywhere is disgusting. 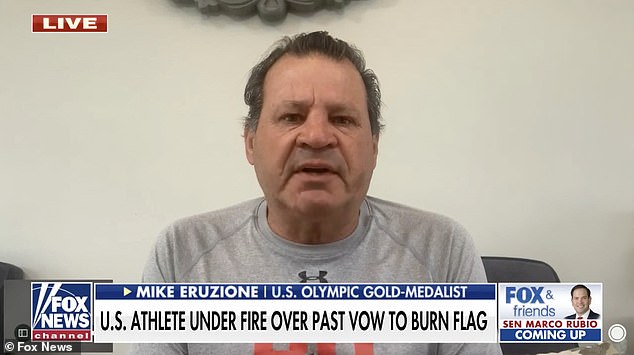 Mike Eruzione (pictured), 66, said he thought it was a prank when he first heard that BMX freestyle rider Chelsea Wolfe threatened to burn the American flag on the Olympic podium

‘To use your forum on the podium of the Olympic Games, I was like really, could someone actually think about doing that?’

Wolfe’s controversial comments came in protest to the Trump administration declaring that transgender girls should be treated as ‘biological males’ for school sports.

In a now-deleted Facebook post from March last year, Wolfe – who identifies as a transgender woman – said: ‘My goal is to win the Olympics so I can burn a US flag on the podium.

‘This is what they focus on during a pandemic. Hurting trans children’

She has since told Fox News that the post doesn’t mean that she doesn’t care about her country, instead saying she wants to represent America to show it has ‘morals and values’.

Wolfe, who has qualified for the Tokyo Games as an alternate, added: ‘Anyone who thinks that I don’t care about the United States is sorely mistaken.’ 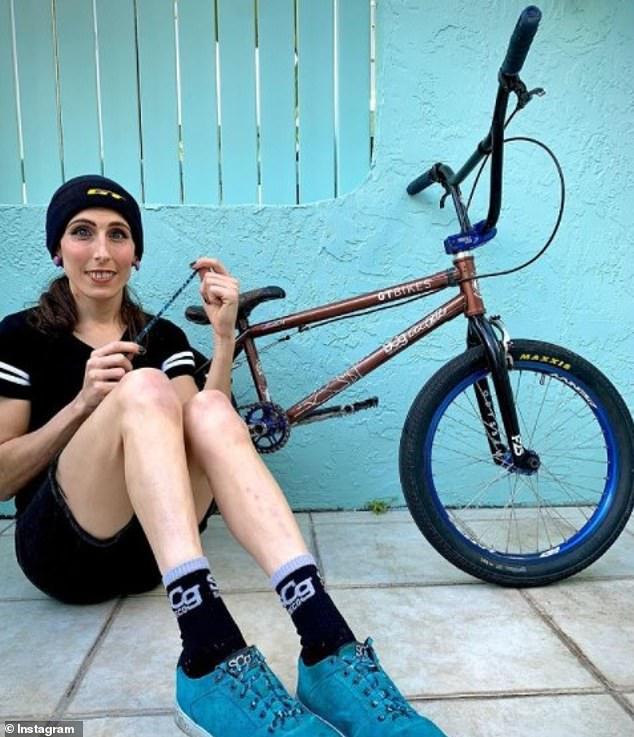 Wolfe (pictured), who qualified for the Tokyo Games, said in a now-deleted Facebook post from March last year that she wanted to win the Olympics so she could burn the flag on the podium 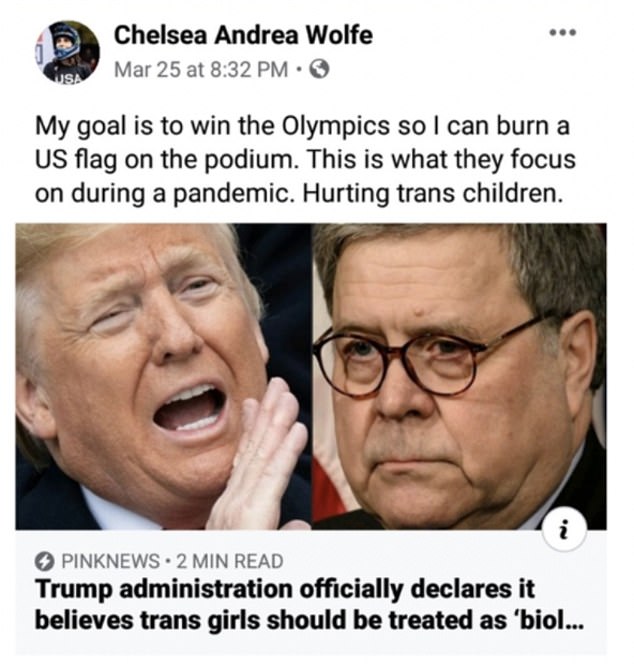 Her remarks come after it was announced that she qualified for the Tokyo Games as an alternate, meaning she will become the first transgender Olympian in Team USA history.

Wolfe qualified for the position by earning a fifth-place finish at the World Championships, but will only get a chance to compete in the Olympics if either qualifying rider Hannah Roberts or Perris Benegas drop out.

‘My goal is to get as far as I can go,’ said Wolfe. ‘And if that means gold at the Olympics, then cool. But if not, I’m proud of everything I’ve accomplished along the way.’

In an Instagram post, Wolfe reacted to her historic accomplishment, saying: ‘It’s taking a bit to fully register that after so many years of work we finally have the @teamusa bmx freestyle squad for the @olympics, and that after so much work and overcoming so many obstacles that I’ve qualified to represent the United States as the alternate rider,’she wrote.

‘I am positively a different person than when I set off on this journey and I’m so grateful for every experience along the way and I’m so excited and honored to keep working so I’m ready to shred in Tokyo in case I’m needed.’

Born and raised in West Palm Beach, Florida, Wolfe began racing competitively when she was just six, spending her evenings riding around her local skate park. 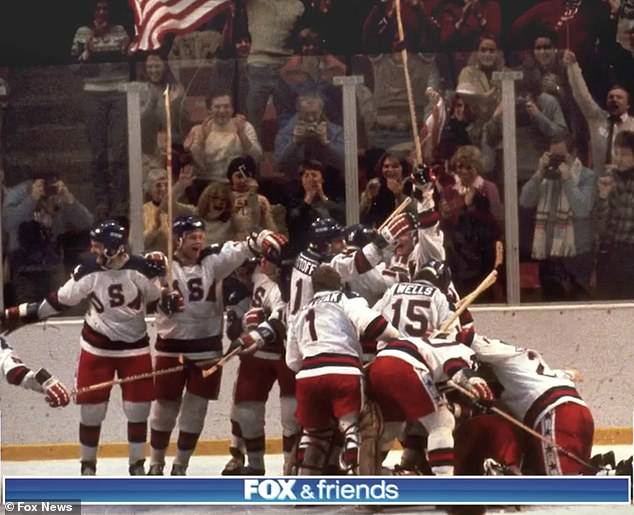 The former ice hockey player said he was baffled by her remark as he considers competing at the Olympics (pictured: Ice hockey team after 1980 win) to be the ‘ultimate honor’ 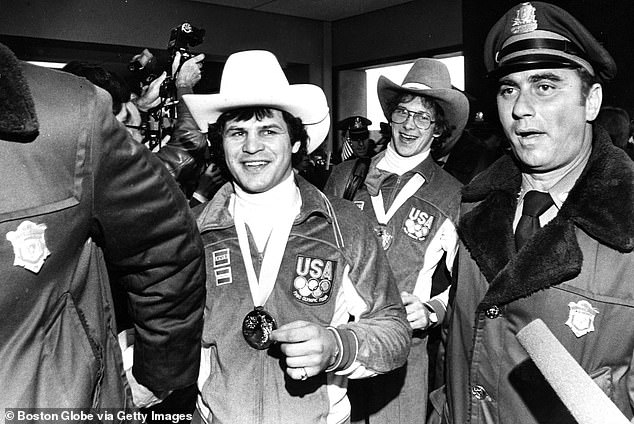 Eruzione (pictured left after 1980 victory), who helped to defeat the Soviet Union hockey team in 1980 in the famous ‘Miracle on Ice’ game, described the Olympics as the ‘ultimate honor’

When she turned 15, she traded in her regular bicycle for a trick bike and started riding freestyle. For many years, she competed with male athletes, hiding her identity as a transgender woman.

‘I had this fear that if anyone knew that I existed, even some of my idols… I was scared that they would reject my existence,’ Wolfe told the Thomson Reuters Foundation by phone.

When she became public in 2014, Wolfe said most of her fellow riders welcomed her, though some tried to undermine her, viewing her biological sex as an unfair advantage.

‘I have to laugh about that,’ she said. ‘What’s annoying about it is that no matter how hard you work as a trans athlete, people are still going to say, “Oh, you have your accomplishments because you’re trans”.’

Now, Wolfe trains most days, for three hours on average, fitting it in around her job at her local grocery store.

The inclusion of trans athletes in elite women’s sport has become the subject of huge controversy, with critics arguing that being born male provides a physical advantage even after transition.

Justice Department lawyers urged a West Virginia judge to invalidate a state law banning transgender athletes from competing in female sports in middle and high schools and colleges, in a legal brief known as a ‘statement of interest’. 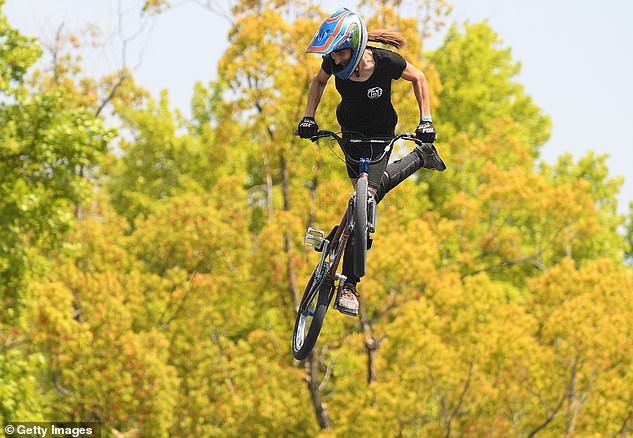 Wolfe (pictured in April 2019) said her latest comments don’t mean she doesn’t care about her country, instead saying she wants to represent America to show it has ‘morals and values’ 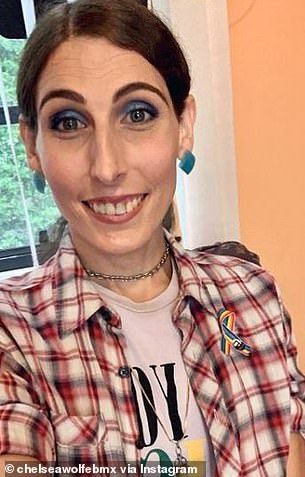 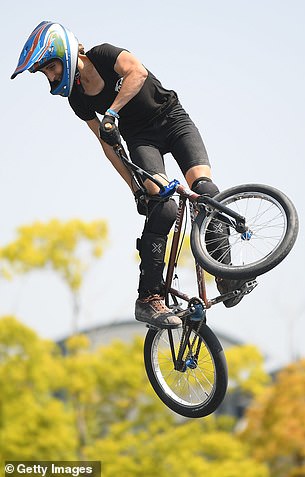 Wolfe’s (left and right) comments come after it was announced she qualified for the Tokyo Games as an alternate, and she will be the first transgender Olympian in Team USA history

Officially, male-to-female trans athletes have been allowed to compete in the Olympics since 2016 if their testosterone levels remain low enough for a year, under IOC guidelines.

Asked about the policy, the IOC told the Thomson Reuters Foundation it was up to international sports federations to decide eligibility rules for specific sports and events.

Requirements issued this month by the UCI, the world governing body for cycling, require transgender women to keep their testosterone levels below a certain level for 12 months and sign a declaration that their gender identity is female.

Transgender athletes are not required to gain legal recognition of their gender identity nor undergo anatomical surgery to be eligible to compete.

In the United States, the debate over trans athletes has focused on school sports, with at least five states considering laws that would restrict children to competing in leagues that align with their biological sex at birth.

Wolfe criticized such moves as ‘sickening’, accusing conservative US lawmakers of trying to ‘stop elite trans athletes from existing in the first place by preventing us from getting into sports at all’.