Chinese tennis star Peng Shuai, whose whereabouts have been a matter of international concern for weeks, attended a tennis tournament in Beijing on Sunday, according to official photos published by the tournament organized by China Open.

Peng, 35, can be seen among guests at the Fila Kids Junior Tennis Challenger Finals, dressed in a dark blue jacket and white trousers, according to the pictures published on the event’s official WeChat page.

The former doubles world number had not been seen or heard from publicly since she said on Chinese social media on November 2 that former vice-premier Zhang Gaoli, now in his 70s, had ‘forced’ her into sex during a long-term on-off relationship.

Neither Zhang nor the Chinese government have commented on her allegation. Peng’s social media post was quickly deleted and the topic has been blocked from discussion on China’s heavily censored internet.

Peng Shuai showed up at the opening ceremony of a teenager tennis match final in Beijing on Sunday morning. Global Times photo reporter Cui Meng captured her at scene. pic.twitter.com/7wlBcTMgGy 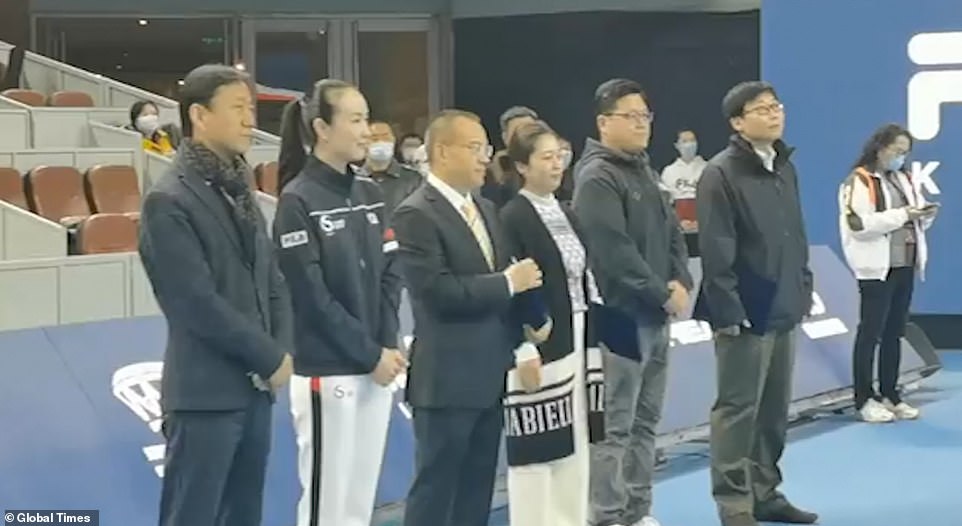 Chinese tennis star Peng Shuai (second left), whose whereabouts have been a matter of international concern for weeks, attended a tennis tournament in Beijing on Sunday, according to official photos published by the tournament organized by China Open 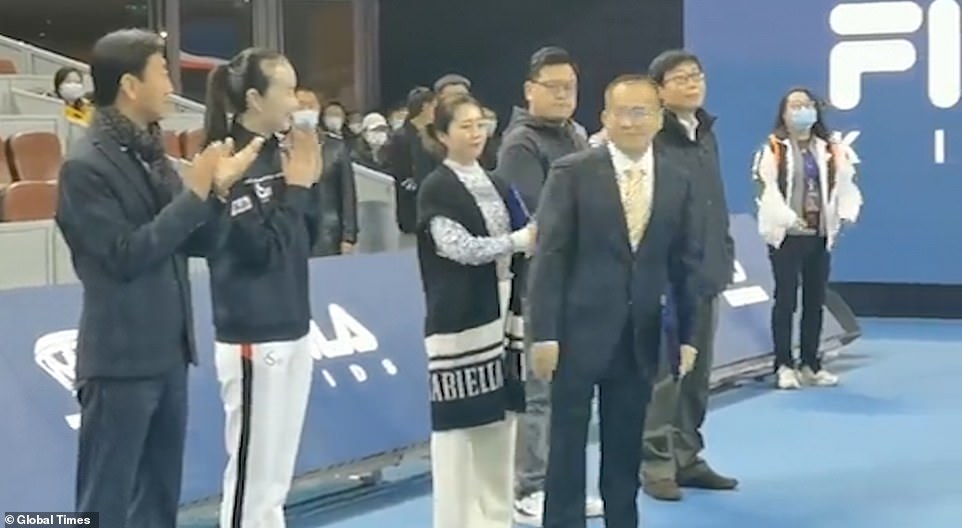 Peng (second left) can be seen among guests at the Fila Kids Junior Tennis Challenger Finals, dressed in a dark blue jacket and white trousers, according to the pictures published on the event’s official WeChat page 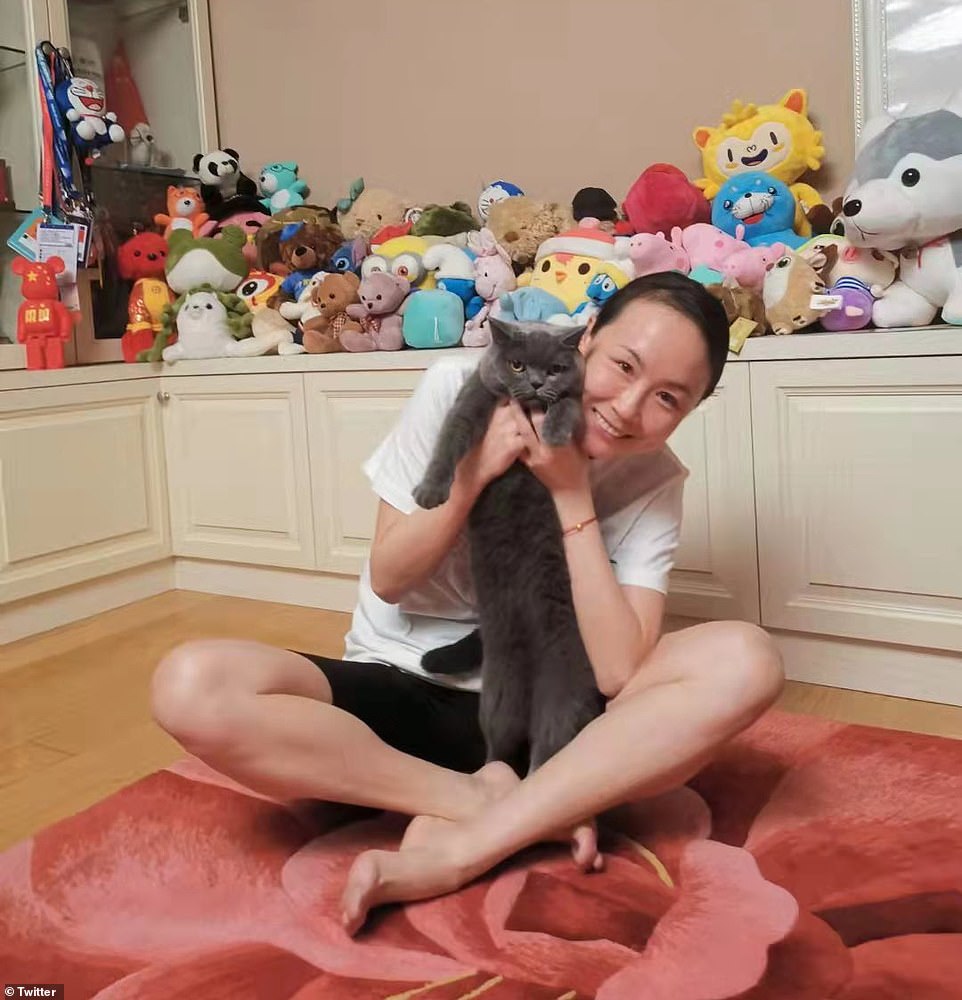 In response to her apparent disappearance, the Women’s Tennis Association (WTA) threatened to pull tournaments from China, which would be costly for the country’s economy. The United States and Britain have called for evidence of Peng’s whereabouts and safety.

The WTA and the U.S. and British embassies in Beijing did not immediately respond to Reuters requests for comment on Peng’s Sunday appearance in the Chinese capital.

The issue of Peng’s safety and whereabouts has emerged as China prepares to host the Winter Olympics in Beijing in February amid calls from global rights groups and others for a boycott over its human rights record.

Hu Xijin, the editor of state-backed newspaper Global Times, tweeted Peng’s appearance at the tournament earlier on Sunday. The Global Times is published by the People’s Daily, the official newspaper of China’s ruling Communist Party.

Videos posted by Hu and a Global Times reporter showed her smiling, waving and signing autographs for children. 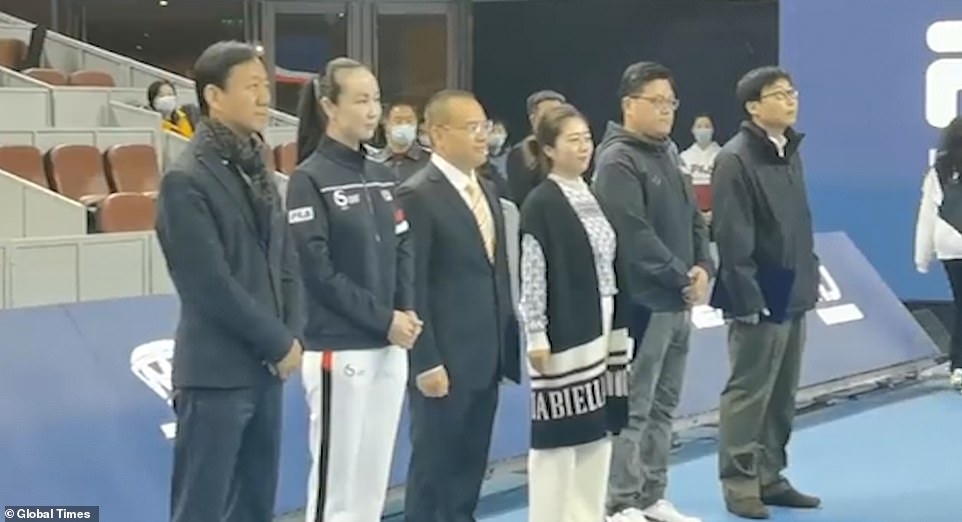 The 37-second video posted appears to show Peng standing in a row of people being introduced to the audience. An announcer says, ‘Two-time Grand Slam champion, former world number one in woman’s doubles – Peng Shuai!’ She waves, smiling, and acknowledges applause.

Global Times chief reporter Chen Qingqing posted a 31-second video, apparently from the same event. Peng appears to sign oversized tennis balls for children and pose with them for pictures.

Reuters was not able to independently verify the authenticity of the images, which were both credited to Global Times staffer Cui Meng.

The unknown whereabouts of Peng prompted the U.S. and the UN to demand proof of her location as concerns rose for the tennis star.

The US is also considering a diplomatic boycott of the Winter Olympics due to be held in Beijing in February while Dick Pound, a member of the International Olympic Committee has said they have not ruled out stopping the games due to China’s human rights record.

The United Nations insisted on a fully transparent investigation into the claims made by Peng against Communist Party grandee Zhang Gaoli – the first time China’s #MeToo movement has touched the highest echelons of the country’s politics.

‘It would be important to have proof of her whereabouts and well-being,’ Liz Throssell, a spokeswoman for the UN Human Rights Office, told reporters in Geneva.

‘We are calling for an investigation with full transparency into her allegation of sexual assault.’ 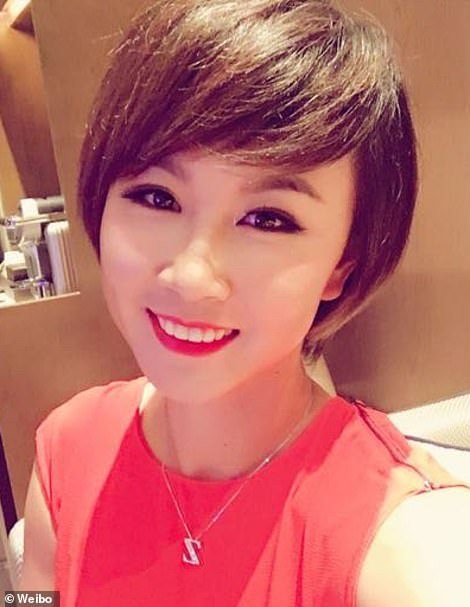 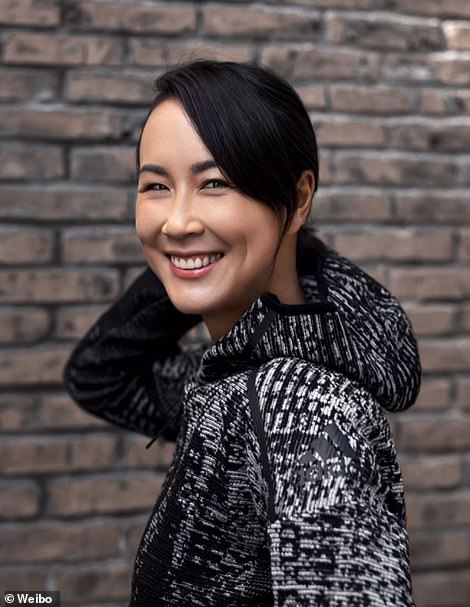 Peng Shuai, 35, a Chinese tennis star, has not been seen since November 2 when she posted on social media accusing a senior Communist official of sexual abuse

On Friday, photos of a smiling Peng emerged on a Chinese state media-affiliated social media account, but their authenticity could not be verified and the user did not respond to request for comment.

Experts questioned the authenticity of the newly released photos that appeared to show the missing tennis star smiling as she poses for the camera behind a sea of children’s toys.

Three photographs posted online by a reporter working with CGTN, the international wing of China’s state broadcaster, purportedly show the 35-year-old tennis ace posing with a grey cat while surrounded by a bed of soft toys.

Shen Shiwei, the man who shared the pictures to Twitter on Friday, said the images had been posted on Shuai’s WeChat messenger, but experts have continued to express doubts over the veracity of the pictures.

Fears continue to mount for Shuai, once ranked as the top female double’s player in the world, who has not been seen since accusing the country’s former vice premier of rape on November 2.

Friday marked the second time in as many days that the Chinese-state broadcaster attempted to alleviate concern over the missing tennis star, after sharing an email claiming to have been written Shuai in which she said she was ‘resting at home’.

Andy Murray and Serena Williams have become the latest high-profile names to join the campaign to find missing tennis star Peng Shuai in the wake of her sexual assault allegations.

The former doubles world No 1 has not been seen or heard from publicly since she said on Chinese social media in early November that former vice-premier Zhang Gaoli coerced her into sex three years ago, and that they had had an on-off relationship.

The post was quickly deleted from her verified account on Weibo, a leading Chinese social media platform, but screenshots of the explosive accusation quickly spread despite the topic being blocked from discussion on China’s heavily censored internet.

23-time Grand Slam champion Serena Williams, 40, publicly called on the authorities to launch an investigation into Shuai’s disappearance and urged those involved to ‘not stay silent’.

Meanwhile, the Women’s Tennis Association (WTA) said it was prepared to pull its tournaments out of China if they were not satisfied with the response to her sexual assault allegation.

It comes after Chinese state media published an English-language email they claimed was written by Peng which said: ‘I’m not missing, nor am I unsafe. I’ve just been resting at home and everything is fine.’

Steve Simon, the head of the Women’s Tennis Association, said he has a ‘hard time believing’ that Peng wrote the email herself and it ‘only raises my concerns as to her safety and whereabouts.’

Simon said that nobody from the WTA has been in direct contact with Peng since she accused 75-year-old Communist party official Zhang Gaoli of coercing her into sex on Chinese social media two weeks ago.

On Wednesday, Simon cast doubt on an email, which was also released by a Chinese state media outlet on Twitter, purporting to be from Peng and denying the allegations of sexual assault.

‘I have a hard time believing that Peng Shuai actually wrote the email we received or believes what is being attributed to her,’ he said.

By Friday, the hashtag #WhereIsPengShuai had racked up over 32 million mentions on Facebook’s Instagram, which is also blocked in China, as well as Twitter, according to hashtag analysis website BrandMentions.

Earlier, China’s Foreign Ministry has said it was not aware of the controversy surrounding Peng, who disappeared after accusing a former top official of sexually abusing her.

Ministry spokesperson Zhao Lijian told reporters that the matter was ‘not a diplomatic question and I’m not aware of the situation’.

The ministry has consistently disavowed knowledge of the issue since it broke as a major global story earlier this week.

Despite this, international pressure has been growing to uncover the truth about Peng’s whereabouts, with 23-time Grand Slam champion Serena Williams, 40, urging an investigation to be launched.

She also participated in three Olympics, making her disappearance all the more prominent with Beijing set to host the Winter Games starting on February 4.

Liz Throssell, a spokeswoman for the U.N. human rights office in Geneva, said Friday it was calling for ‘an investigation with full transparency into her allegation of sexual assault.’

‘And I think we would say that that should be the case into all allegations of sexual assault. It is really important to ensure accountability, to ensure justice for the victims,’ she said.

The land is furnished with roses.. 12 Italian cities whose streets are decorated with paintings of flowers