A little boy who vanished from his family rural property three days ago has been found alive.

AJ, who has autism and is non-verbal, was last seen playing on the porch – with his mother saying he was out of her sight for just a matter of seconds.

The youngster was found in a creek from a helicopter on Monday morning, police confirmed.

‘Missing three-year-old boy Anthony ‘AJ’ Elfalak has been located a short time ago. He is yet to be assessed by NSW Ambulance paramedics,’ a statement read.

The news sparked emotional scenes at the family property, where  AJ’s parents and friends were seen cheering and screaming in delight moments after being told he had been found. 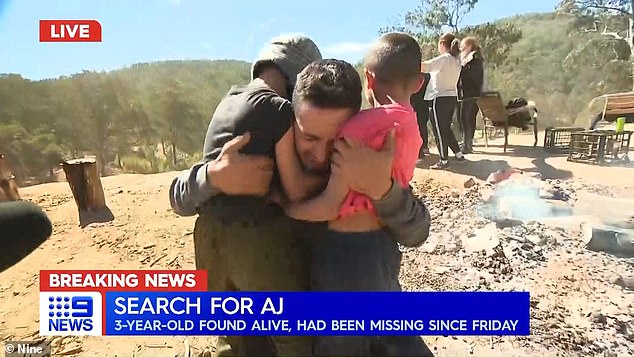 ‘Thank you to my friend, my cousin, my sisters, my family. Thank you, everybody and   whoever prayed for us.’

‘I mean, I think all of us have been crossing everything to make sure AJ is brought back safely,’ she told reporters.

He was at the property at the time AJ went missing and claimed someone had tampered with security cameras he had installed on a tree high above the remote bushland road outside the home.

Mr Hashem said the time AJ went missing was in the four-hour window of footage that was now missing. 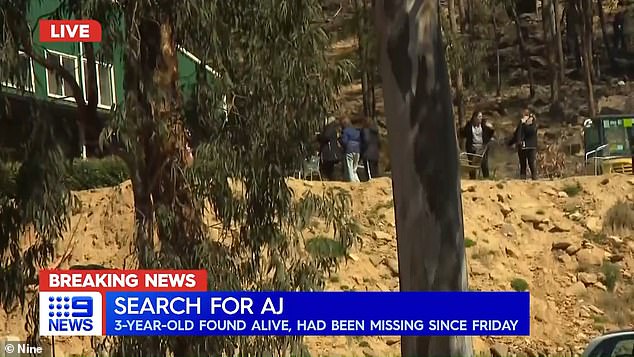 The Elfalak family with father Anthony, mother Kelly, AJ (pictured centre) and two of his brothers

‘There’s one key factor and this probably the first time I actually mentioned this, I installed cameras on that post right there,’ he told the Today show on Monday.

‘There’s footage missing, unexplained. (We have footage from) days before, days after, but not during the time.

‘You know what’s more alarming? We installed it so high you can’t tamper with it and we had two mechanisms of storage – cloud storage and physical storage – and there’s no data in that time slot.

‘We provided the user name and password to the police, we provided them the actual original memory card. There’s a lot of explaining to do.’

He told Sunrise: ‘I put it so high up in a tree that when the fire brigade arrived I said “quickly, quickly, please, let me get the CCTV footage”.

‘We went in there, and I can’t explain it, the window in which he went missing … probably about four hours, there’s footage missing.’

‘There was 160 videos after the incident of emergency services and us taking down the camera. We just don’t have answers at the moment.’

Nine reporter Gabrielle Boyle was quick to point out the strange nature of the decision to install CCTV cameras at the isolated property.

‘It must be said it is a very unusual location to have CCTV. This is such a remote location,’ she said.

‘Many of these farmhouses in and around this area are just little shacks, shantytowns if you will. These aren’t big established homes. This isn’t a fancy area.’

‘This is regional NSW. This is very rugged terrain not the type of place you would expect to have CCTV available and to think that that window where the little boy has gone missing is unavailable on that camera is just so strange.’ 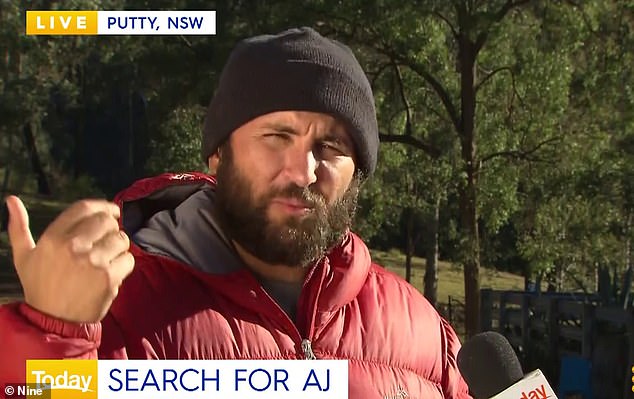 Mr Hashem was at the property helping AJ’s mum prepare lunch on what he described as a typical afternoon when the toddler disappeared.

The boy’s older brothers were in charge of keeping an eye on AJ as they played outside while their father was fixing quad bikes.

‘The oldest boy needed to go to the bathroom and took the youngest one AJ and he left him just inside the dining area,’ Mr Hashem told the Today show.

‘After a few minutes, the boy’s come out and entered through the other part of the house and the mother goes, ‘Where’s AJ?’

‘The boys had a puzzled look on their face. We all stand up and at that moment I had the closest view to the driveway and noticed a white ute, we believe either a Mazda or a Toyota, a much older model. It was slowly driving through here.’

‘We didn’t think much of it but we did in the meantime, we had these ATVs, we had about four of them and we thought if AJ’s gone somewhere it’s not going to be far.’

He and AJ’s family are ‘without a doubt’ the toddler was abducted and hasn’t get lost in remote bushland which backs onto the property.

‘He’s always quite afraid and attached to his mum, hence why his mum couldn’t have him by her side when she’s cooking, he is with his brothers.

AJ’s mother Kelly insisted her son is ‘not a wanderer’ and ‘never leaves her side’, with his father Anthony adding ‘a kid doesn’t just up and disappear’.

Mr Hashem said AJ’s disappearance has shattered his parents, whom he described as the loveliest people he knows.

‘Just bring him home,’ he pleaded.

‘You don’t understand how much pain and anguish this family’s feeling. The reason why I am the spokesperson is because the mother is not coping and the father, he’s holding it together by a thread.’

The family haven’t given up on finding AJ, with Mr Hashem claiming AJ’s dad Anthony got a tip-off shortly before the Today show interview.

‘He’s hired his own private helicopter. We’re going on it today to keep checking the areas although I do have to say police rescue and SES and volunteers have been absolutely phenomenal. I can’t thank them enough.’ 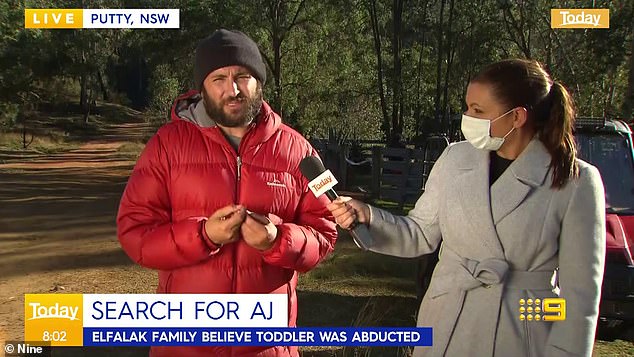 Alan Hashem (pictured speaking on the Today show) said the security cameras were erected so high that no one could tamper with them, amid claims AJ was abducted 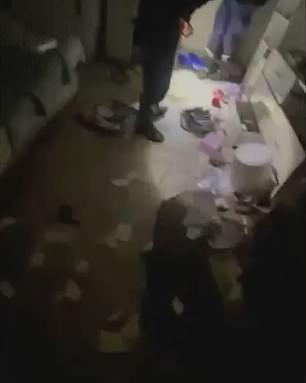 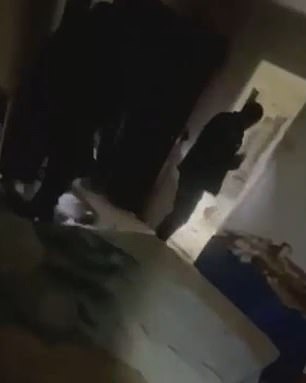 Police investigate a shack (pictured) about 1km south of the Elfalak’s family farm. The shack was derelict and full of rubbish, with police cordoning the property off on Sunday

Mr Hashem first shared his claims about the missing footage from the security cameras during the family’s video conference with their religious community via Zoom on Sunday night.

‘There is something missing in there at the moment but police are investigating,’ he explained.

‘It was very high up. No one could get access to it.’

‘I got the detectives to take it down, take out the memory card and gave it to police.’

A white ute from a nearby property was seized by police on Sunday night as they searched an abandoned shack about 1km south of the Elfalak house, labelling the car a ‘vehicle of interest’.

Pictures from the abandoned property show a dingy shack fitted out with old furniture, with the floors strewn with rubbish.

Police cordoned off the area and are trying to ascertain if anyone had been staying there, with 9News reporting it had been declared a crime scene.

They have also seized a number of items from the property, amid reports someone had been sleeping rough there.

Police also seized CCTV footage from a Colo Heights service station, a 40 minute drive south from Putty in the direction of Sydney, declaring it a ‘site of interest’.

‘I’m his universe. He holds my hand, all day and all night we are together,’ the boy’s mother told The Australian.

She and the boy’s father joined the large search party, including police divers, the riot squad, trail bikes, drones and mounted officers, who were searching for the toddler over the weekend. 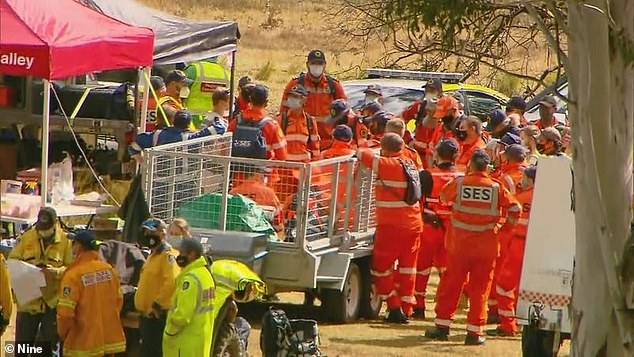 More than 130 SES and police searchers scoured the property on Sunday (pictured) with drones, mounted police, the riot squad and trail bikes all being brought in to help

Police has launched Strikeforce Jaylang to investigate the circumstances of AJ’s disappearance.

‘He’s been taken. If he was around here, I would have found him by now,’ Ms Elfalak said.

‘I have searched the property… I’m still driving around and I cannot find him. If he was here, he’d be close to the property.’

Despite a search party being set up 10 minutes after AJ went missing, with four vehicles soon covering a large radius around the farm, he was nowhere to be found.

Ms Elfalak also said she noticed the suspicious white ute driving away from her house in the minutes after AJ vanished.

‘I saw it, it was driving really slowly, I thought it was my neighbour’s,’ Ms Elfalak told The Daily Telegraph.

‘He’s not a wanderer… he never leaves my side.’

She was in the kitchen as AJ played on the porch, while his father was nearby in the yard fixing the chain on his quad bike.

AJ was dressed in a grey top and pants with sneakers and is described as being of Mediterranean or Middle Eastern appearance, with short brown hair.

Officers on Sunday were seen talking to one of AJ’s older brothers – he has three brothers Michael, Patrick and Alexander – in a paddock near the house, with one of the young boys taking detectives on a re-enactment of his brother’s disappearance. 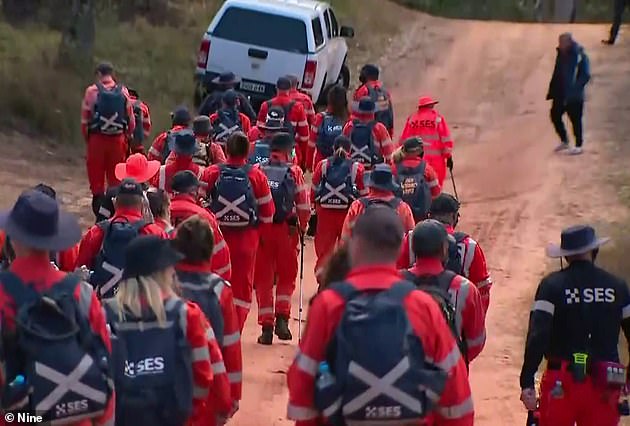 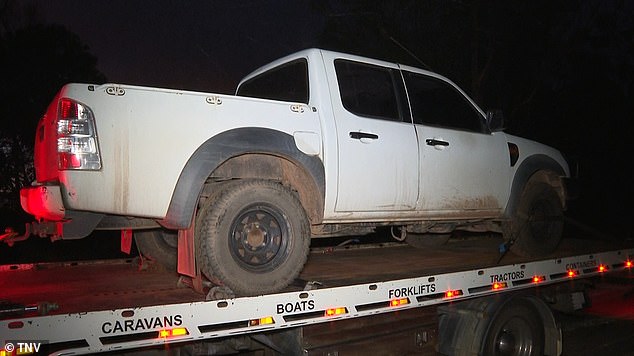 A neighbour recalled hearing AJ’s mother raise the alarm and then stood up and spotted the vehicle – a white 1987 dual cab Toyota Hilux ute – driving down the road to the property.

He said the ute drove along Yengo Drive, 100m from the family’s house, before going out to Putty Road – something he found unusual.

‘We didn’t see it enter. We see every car that enters because it’s a dead end… Something’s not right. Something doesn’t stack up,’ he added. 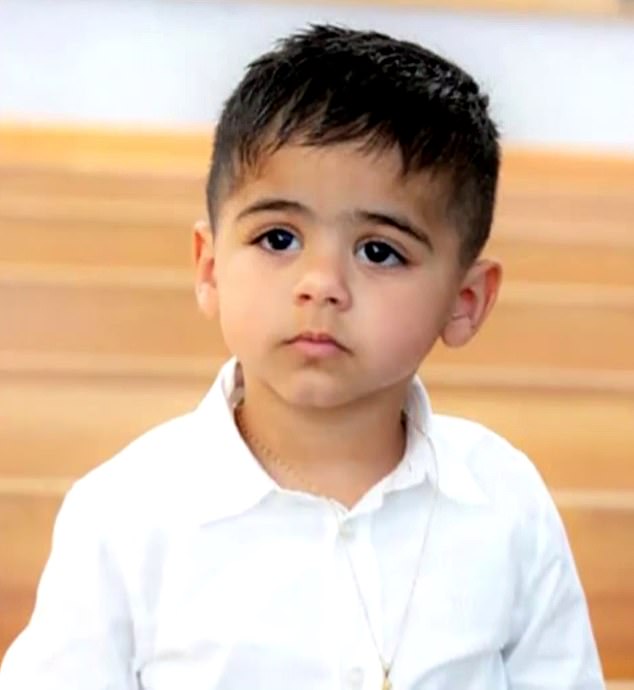 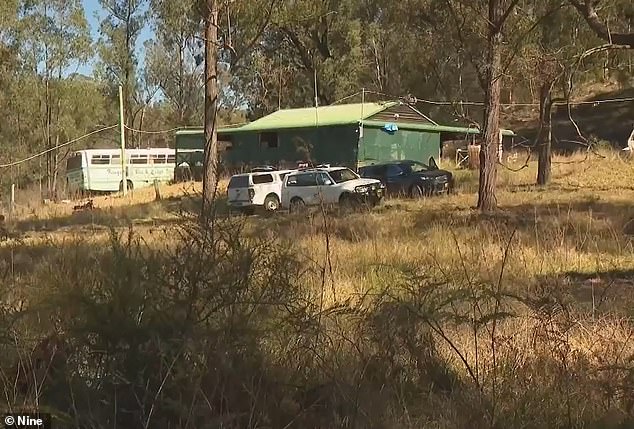 Despite the desperation of the four-day-long hunt, officials have asked locals not to join the search as it would breach Covid restrictions.

NSW Police said public assistance is not required in the search for the young boy and reminded people that Covid Public Health Order restrictions still apply in the region.

‘Obviously our focus is very much around the search and trying to locate AJ.’

Anyone with information is urged to contact Crime Stoppers. 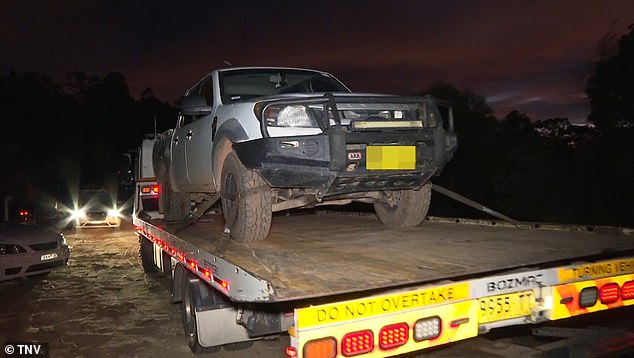 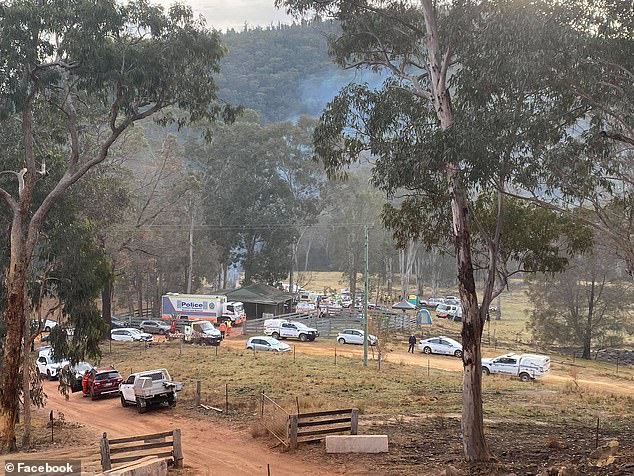 The search is set to continue on Monday with helicopters and drones searching from the air (pictured, rescue crews with police at the property on Sunday) 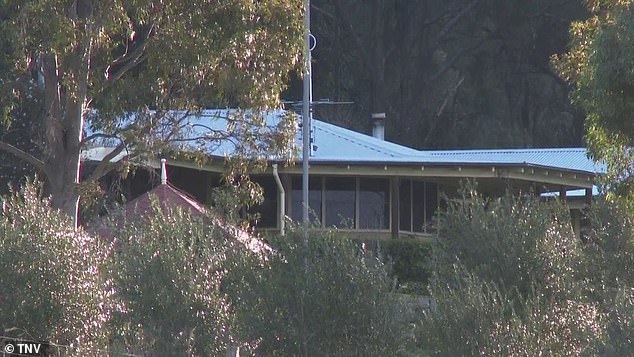