Model claims she is too sexy for TikTok’s censorship algorithm


A curvy model has hit out at TikTok, accusing the video sharing platform of ‘discriminating against her body’ after removing her videos because she’s ‘too sexy’.

Neyleen Ashley, 31, from Miami, Florida, claims TikTok – famous for users’ choreographed and intentionally humorous videos – makes a point of removing her clips, even when similar skits from other models remain online.

‘It makes me sad when they remove my videos,’ explains the pretty blonde, who also regularly posts saucy photos to her two million followers on Instagram. 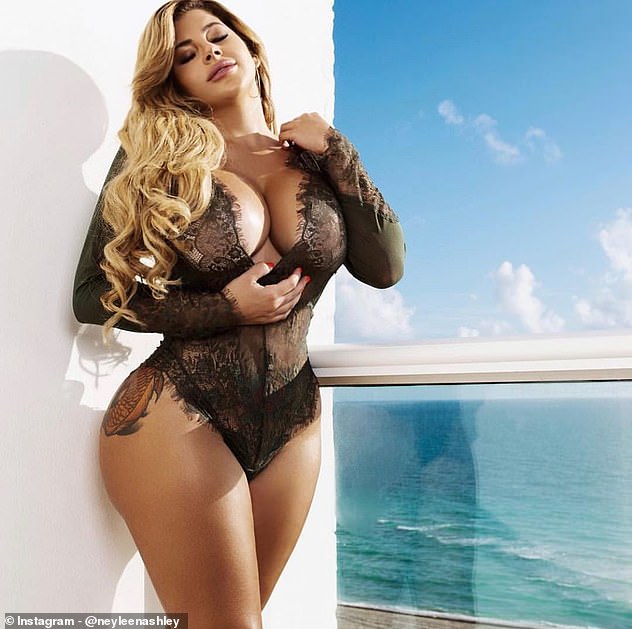 Neyleen Ashley, 31, believes Tik Tok is removing her videos and followers, claiming its algorithm is censoring her clips  – despite videos similar to hers still remaining on the app 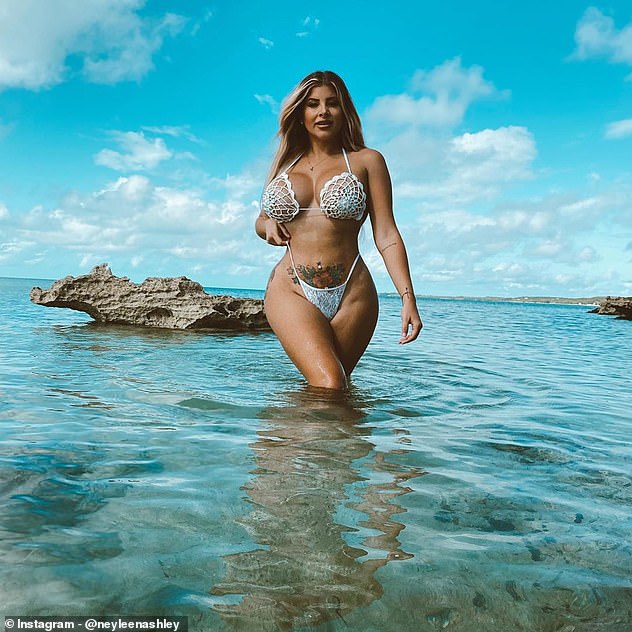 The curvaceous woman said the platform’s removal of her videos, which she puts a lot of effort into, makes her feel sad and she claims her content is too sexy for Tik Tok

She said the censure is especially hurtful because TikTok has provided Neyleen with a psychological lifeline during the past few months.

‘During coronavirus I fell in love with TikTok,’ she said. ‘My first ever ventures in social media were doing funny videos on (now defunct short-video sharing platform) Vine.

‘So when Vine got shut down, I quickly transferred my talents to Instagram.

‘Then later on TikTok became a release for me and my comedic personality – until I noticed they kept discriminating against me for my body.’ 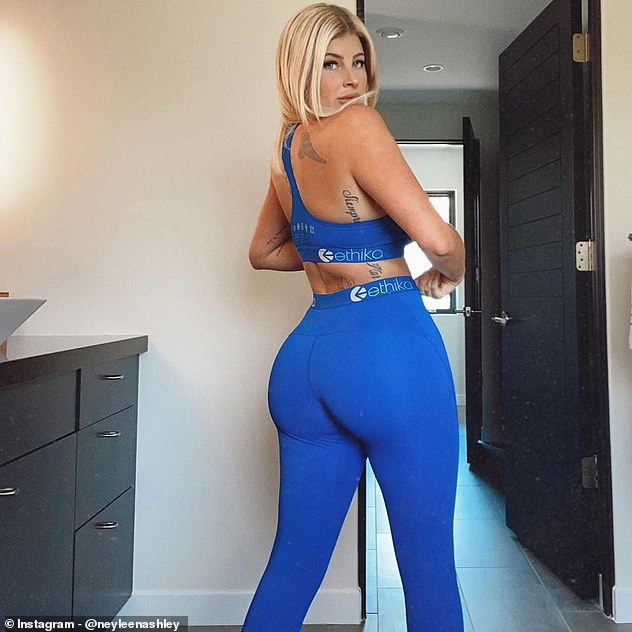 To add insult to injury, Neyleen claims the platform allows videos similar to hers by other content creators to stay on Tik Tok but hers get removed without warning and she also loses followers 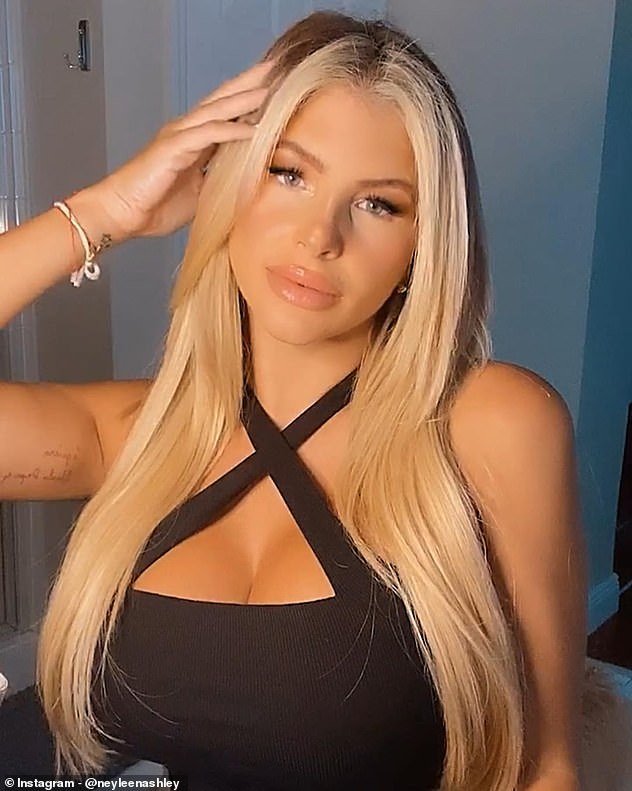 Neyleen believes it is her ample curves that caused the platform’s censorship algorithm to make an example of her.

‘Given that it is summer time, many people on TikTok are posting in bikinis or shorts,’ explains Neyleen.

‘If I post the same kinds of videos, wearing a bikini or shorts – not even showing too much cleavage in comparison to the other girls – they immediately delete it and remove followers.

‘Then they say I am going against community guidelines.’ 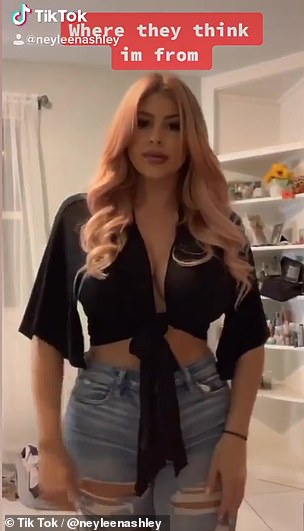 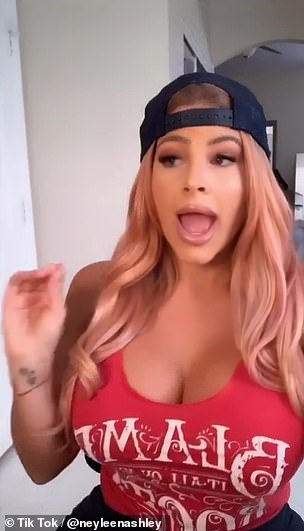 Despite her content being similar to hundreds of others on the app, Neyleen’s  posts – such as Tik Tok dances and comedy sequences – are often removed

The stunner – who earns up to $1,000 per social media post and describes her aesthetic as ‘sporty chic’ – does harbour career aspirations beyond social media stardom.

‘I am still enrolled in nursing school,’ she said. ‘But I took a break due to the pandemic.

‘Right now I am a full time Instagram model and Twitch streamer.’

Twitch is an Amazon-owned live streaming service popular with video gamers and fans of esports. 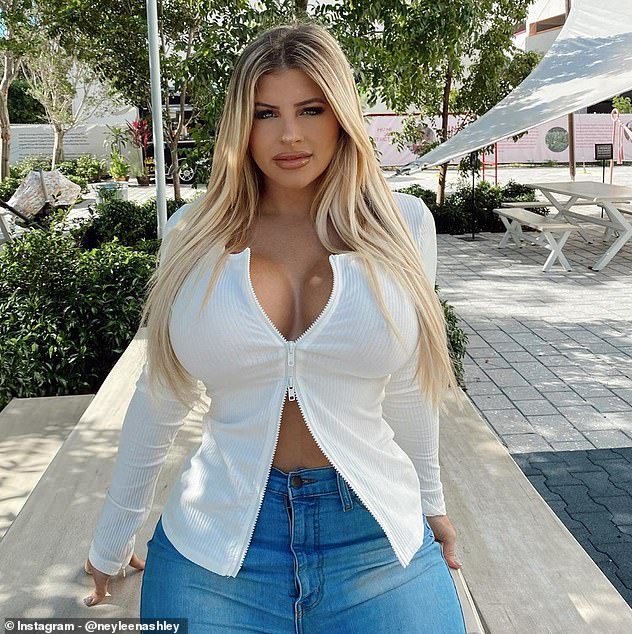 Attractive girls notoriously receive short shrift from hardcore gamers on Twitch, who dismiss them as ‘casuals’ – and Neyleen is no exception.

‘My Twitch channel is such a special place for me,’ she says. ‘I get a lot of hate and plastic comments that really hurt me, but it comes with the territory.’

No stranger to hurtful online abuse, remarks made about Neyleen and her figure still cut deep.

‘Yes, people’s reactions to me are often hurtful,’ she explains. 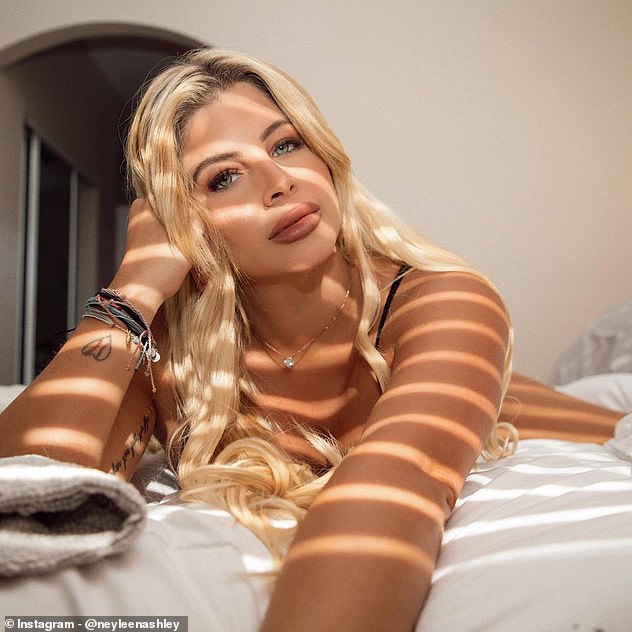 Until she decides to go back to studying, when the world returns to some kind of normality, she is going to continue being a full time Instagram model and Twitch streamer

‘They’ve caused me to really take into account what I eat on a daily basis to make sure I stay as thin as possible to be less of a spectacle.

‘It really takes a toll on me.’

Still, she does enjoy a robust support network in the shape of her family and friends.

‘They all love what I do,’ says Neyleen cheerfully.

And despite the haters, Neyleen can still boast many hundreds of thousands of dedicated followers who are there to pick her up at the end of a rough day.

‘I love them, and they love me – thankfully!’

The Papers: 'Medics angry over meals' and 'elderly paid price'

'If the Stretford End is full we might get that ball over the line': Ole Gunnar...

'Not just numbers': The women disappearing in Peru