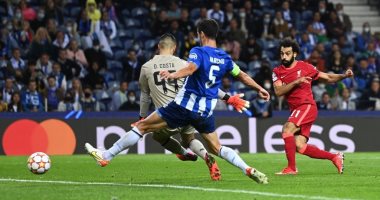 The Egyptian star Mohamed Salah, the Liverpool striker, won the best player award in his team’s match against Porto, which ended 5-1 during the match that brought the two teams together this evening, Tuesday, at the Dragao stadium, in the second round of the group stage competitions in the Champions League. Europe in the current season 2021-2022.

Our Egyptian star, Mohamed Salah, who participated from the start of the match, scored a double during the meeting, to exit from the 67th minute for rest in preparation for the upcoming Reds matches in the Premier League.

During the 67 minutes he played, Salah made 36 touches to the ball, and two attempts on the goal, of which he scored two goals, with a passing accuracy of 85%, and created two chances.

In the second half, Mohamed Salah scored his second and third goal for his team in the 60th minute, before Roberto Firmino scored a double in the 77th and 81st minutes, ending the match with a 5-1 victory for the Reds.