Dramatic dash cam footage shows the moment a large container separated from an HGV and narrowly avoided hitting drivers on a busy motorway.

Motorist Christine Luff captured the heart-stopping incident while driving on the M25 motorway just outside Potters Bar in Herefordshire on March 22.

The 69-year-old from East Hunsbury in Northamptonshire was travelling on the busy road with her 89-year-old mother when the 20-foot container became detached. 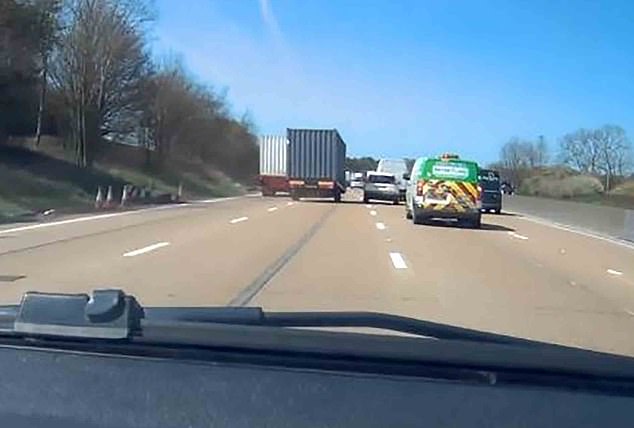 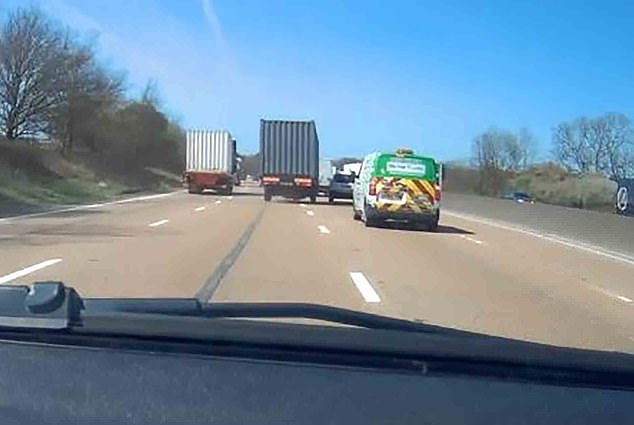 In the footage, retired hairdresser Ms Luff is approaching an HGV pulling two large containers in the left-hand lane of the busy motorway surrounded by other vehicles.

Without warning, the trailer carrying the rear container detaches from the one in front and swerves across three lanes to the central reservation.

A motorist in a white Peugeot dodges the container as it moves to the right but it was clipped, Ms Luff said.

The container then collides with the central reservation and comes to a stop. As Ms Luff overtakes the scene, the white car can be seen pulling over to the side of the road.

Ms Luff’s husband Brian shared the footage on his Facebook page that night, captioning his post: ‘Dashcam today from our car. ‘Wait for [the] 20 foot container to disengage.’

Social media users have reacted to the terrifying footage. Paul Varley said: ‘That could have been so bad. Thank goodness nobody was hurt.’

Geoff Marshall posted: ‘Holy s***.’ Callum Turff commented: ‘Must have been a mechanical failure right? No way he made it that far if it wasn’t coupled correctly.’ 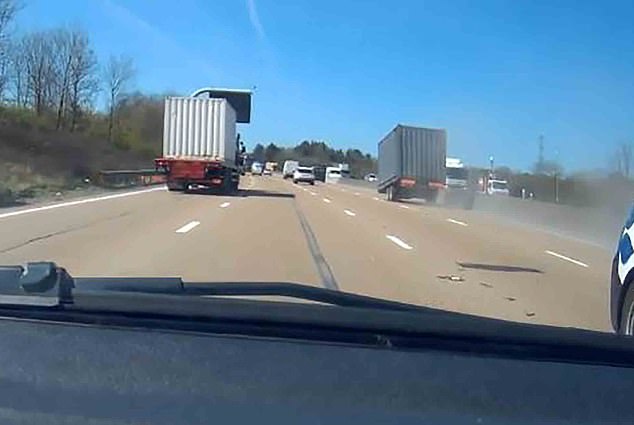 Amazingly, nobody was injured when the container swerved across the road, pictured

Speaking today, Ms Luff said: ‘I slowed down with hazards on and saw that the rest of the traffic had slowed also.

‘I carried on slowly at first and saw the white car involved in the film, he had been clipped and had then stopped at the side.

‘Glad to be out of that unscathed.

‘I am glad to be a couple of seconds behind the incident and not getting rear-ended.’

The Metropolitan Police told MailOnline: ‘At 12.29hrs on 22 April police responded to reports of trailer having become detached from a lorry on the M25 between J24 and J25.

‘Officers attended. The trailer was recovered from the highway and reattached to the vehicle.

‘Safety cordens were established while the trailer was recovered.’