Disturbing security videos have shown for the first time how a 29-year-old man in police custody doused himself in hand sanitizer before bursting into flames when he was tasered by cops – before the officers run away as he burns, leaving him clawing at his back and head as he tries to extinguish the fire.

Jones’s attorney has not disclosed why he had ended up in police custody that day. 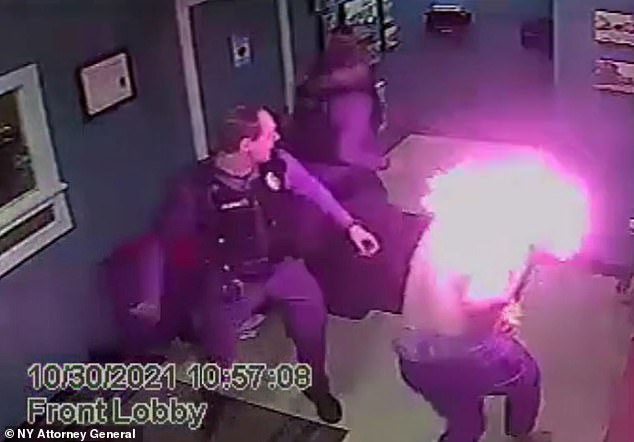 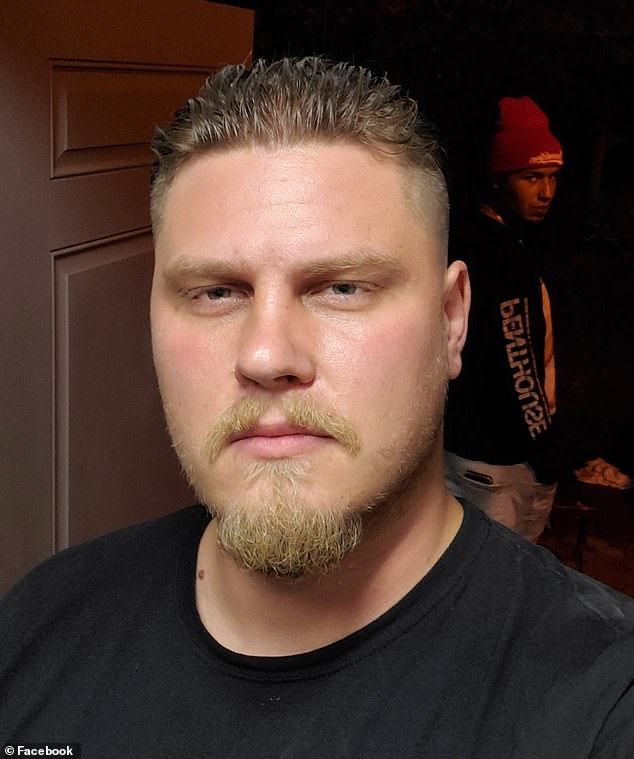 Jones, 29, died on December 15 after spending six weeks in a medically induced coma

The first video from inside the police station shows Jones looking unsteady on his feet as he paces around the lobby and gesticulates.

The tall, stout young man appears visibly agitated as he sways from side to side. He has some words with two officers, but it is unknown what is being said because the recording has no audio. 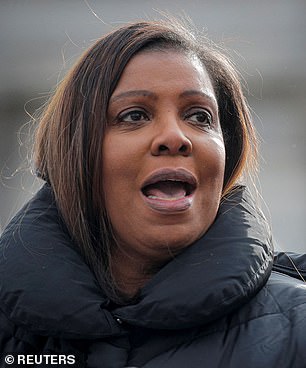 The 30-minute video culminates with Jones pulling off his hooded sweater and ripping off a black t-shirt, exposing his naked torso. He also removes his shoes and socks as a trio of police officers look on.

A large plastic hand sanitizer container is seen standing on a folding table in the lobby within Jones’ reach.

One of the officer aims his Taser at Jones and fires electrodes, which make contact with the the antiseptic-soaked man, who is just off camera at that moment.

Seconds later, there is a flash of light, and Jones comes into view on fire.

He collapses to the floor, with flames engulfing his head, chest and upper back. The officers run out of the room, leaving Jones writhing in agony and desperately trying to put out the fire consuming his skin with his own hands. 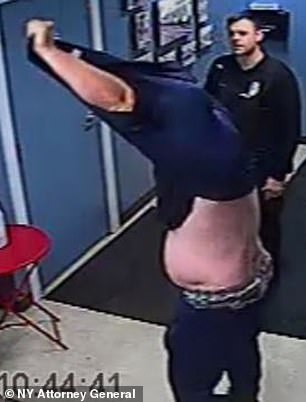 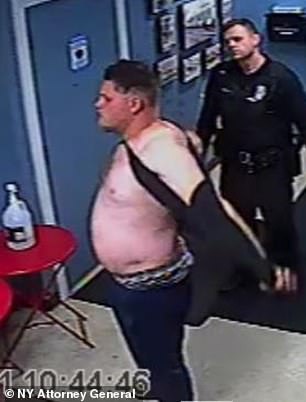 The first of two videos released by the AG shows an agitated Jones ripping off his clothes in the lobby of the Catskill Police Department on October 30, 2021. It’s still unclear why Jones was there that day 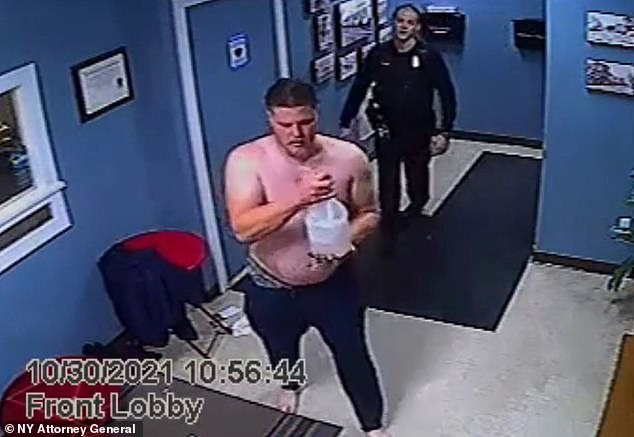 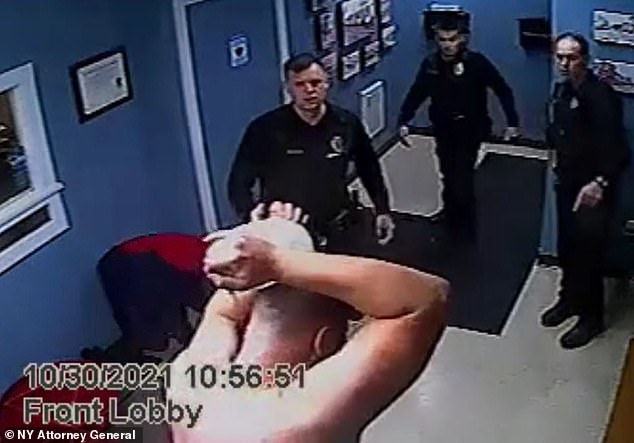 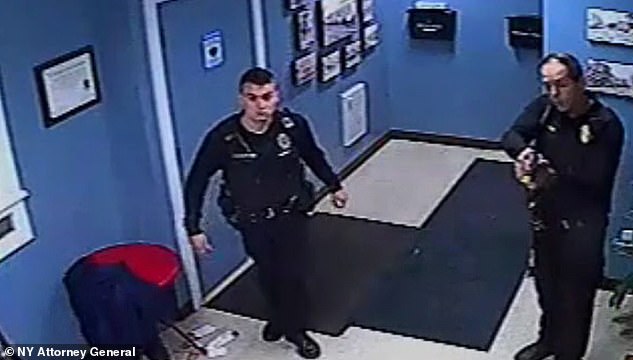 One of the cops, seen on the right, aimed his Taser at the antiseptic-soaked Jones and fired electrodes into his body 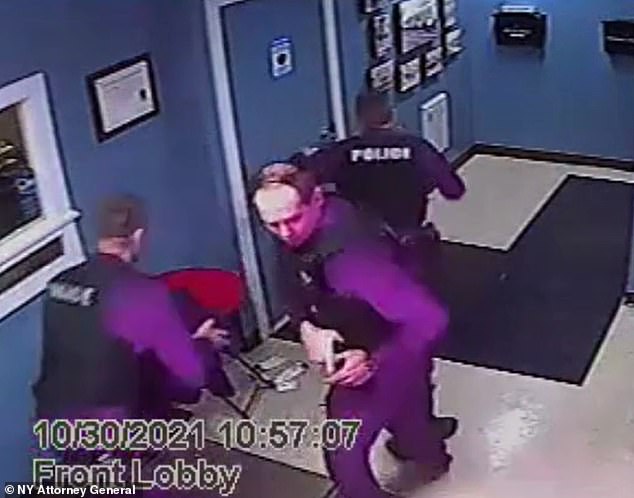 Seconds later, there is a flash of light and Jones becomes engulfed in flames

One of the officers peers at Jones from around the corner but does not come near him to help.

The cop who shot Jones with the Taser walks back into the lobby and tries to provide assistance, but then grabs his arm, as if trying to put him in handcuffs.

Another person, whose identity is unknown and whose face is intentionally blurred in the video, enters the lobby and wraps their arms around Jones to comfort him.

Jones, whose scorched skin looks violently red, appears to be in distress as he talks at length to the police.

Eventually, a woman wheels a gurney into the lobby and Jones is taken away in handcuffs. He appears conscious and alert at that time.

Six weeks later, Jones, who was on fire for about 25 seconds, was taken off life support. 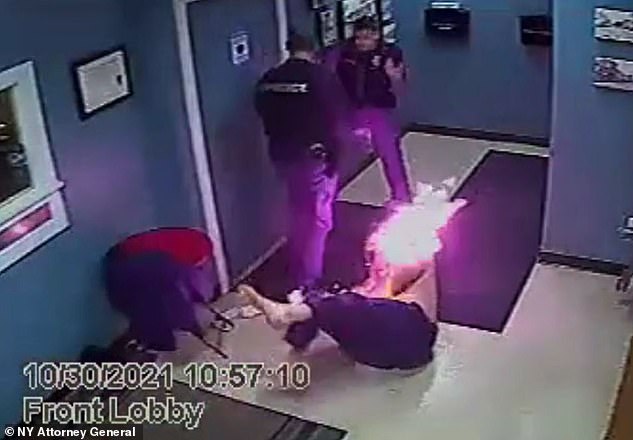 In the video, the officers are seen running away as Jones rolls around on the floor 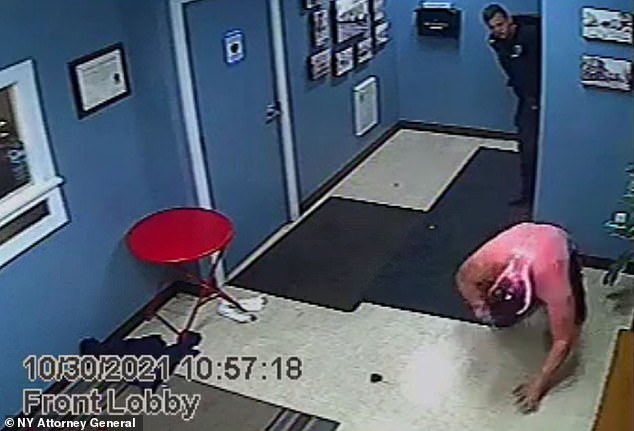 An officer peers at Jones, with his head engulfed in flames, from around the corner but makes no attempt to help, as it appears in the video 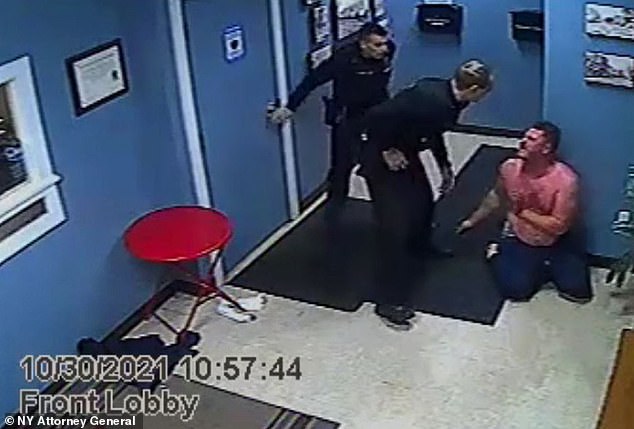 After Jones puts out the flames with his own hands, many minutes pass before medical help arrives 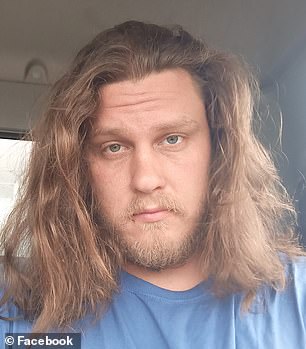 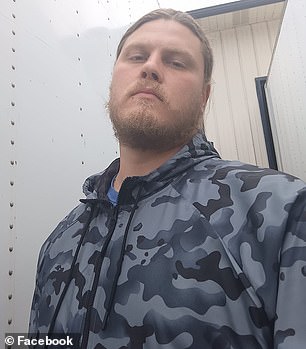 Jones was taken off life support six weeks after the incident. He had been a standout track and basketball athlete at Catskill High School more than a decade ago

Police Chief Dave Darling said officers in Catskill, about 33 miles south of Albany, were familiar with Jones from previous encounters and were likely afraid he was going to hurt himself.

The police chief described the situation as ‘horrible’ and said it was under investigation by the Greene County district attorney’s office.

After Jones’ death, the investigation was taken over by AG James’ Office of Special Investigation, which ‘assesses every incident reported to it where a police officer or a peace officer, including a corrections officer, may have caused the death of a person, by an act or omission.’

Jones had been a standout track and basketball athlete at Catskill High School more than a decade ago, The Times Union reported.

Saperstein still has mega-cap tech as top pick for 2022

‘The agonized screams of family members are audible from the parking lot’ as parents of the Texas school shooting victims discovered their children had been killed: report

A family grieves outside of the SSGT Willie de Leon Civic Center following the mass shooting at Robb Elementary School on May 24, 2022 in Uvalde, Texas.Brandon Bell/Getty...

Saperstein still has mega-cap tech as top pick for 2022