Moment on stage brawl breaks out at Cardiff pub gig


This is the shocking moment a reveller was tackled to the ground by bouncers after he began dancing to a live band inside a pub.

Footage captured on CCTV shows the man grapple with the pub’s doormen after he begins to dance in front of other revellers at the The Claude pub in Cardiff on July 17 at around 10pm.

The scenes come as Wales continues to take a more cautious approach to Covid-19 restrictions, with social distancing of two metres between different households still in place in all indoor and outdoor public events until August 7.

The restrictions mean that live music events are allowed to return – but only if audiences remain seated. 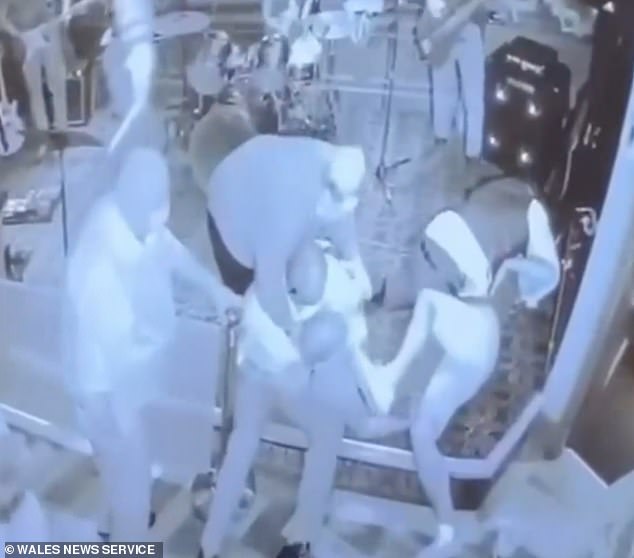 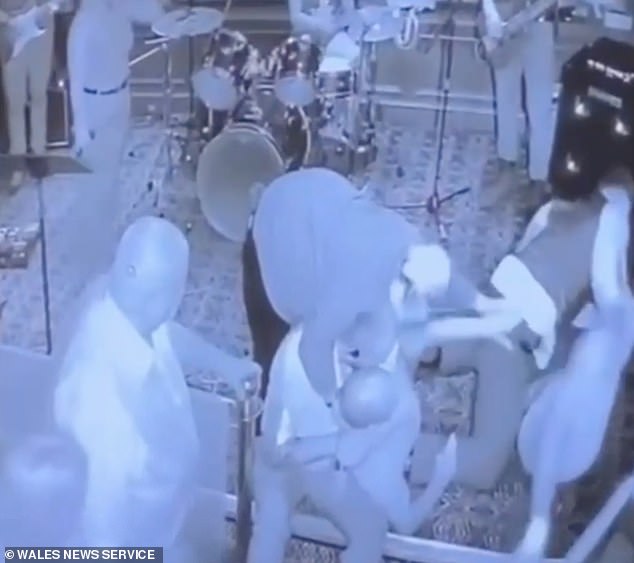 During the clip, bouncers and at least two revellers are seen tackling each other to the ground as the fight breaks out at the foot of the stage.

Witnesses at the pub, which last year underwent a six-figure refurbishment by national pub operator and brewer Greene King, said bouncers had told the man to sit down when he allegedly lashed out and sparked a brawl.

But despite the disruption, covers band The Firm – who were playing their first gig since the start of lockdown in 2020 – vowed ‘the show must go on’ and continued with their performance at the Cardiff pub.

The Firm bass player Matt Warr said: ‘We had just started playing Mr Brightside when this guy got up and started dancing.

‘He was told to stop dancing and sit down but he took exception to it.

‘It all happened in a flash but from what I could see he then rugby tackled one of the bouncers and that’s when it happened at the stage.’

He added: ‘We looked at each other and just continued playing. It looked like the bouncers had it all under control.

‘It was one of those things that if someone was seriously hurt then obviously we would stop straight away. This was just booze.

‘I asked the manager afterwards if he was ok with us continuing and he was fine.’ 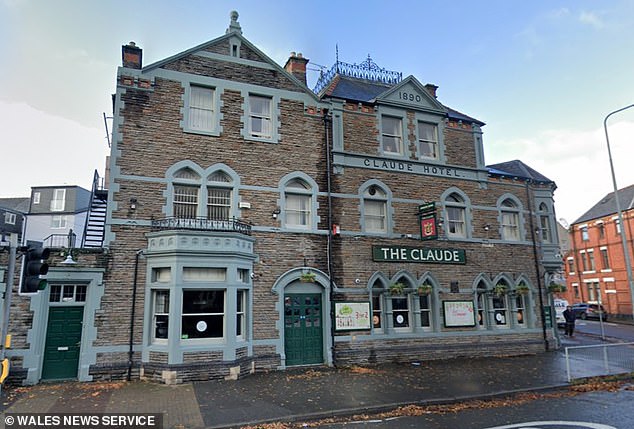 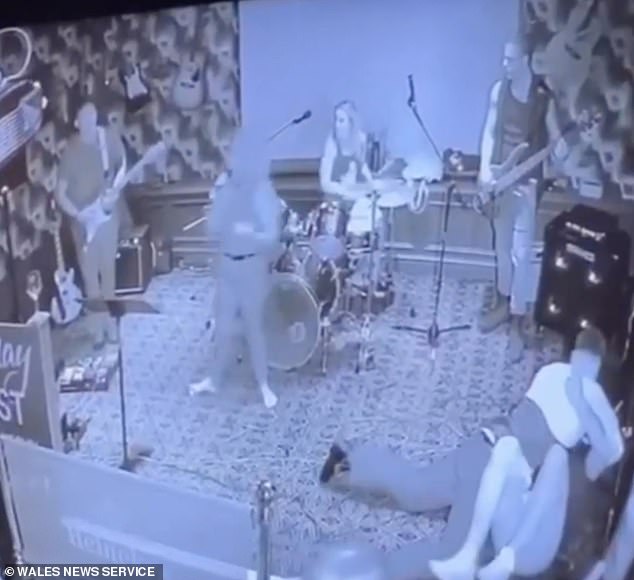 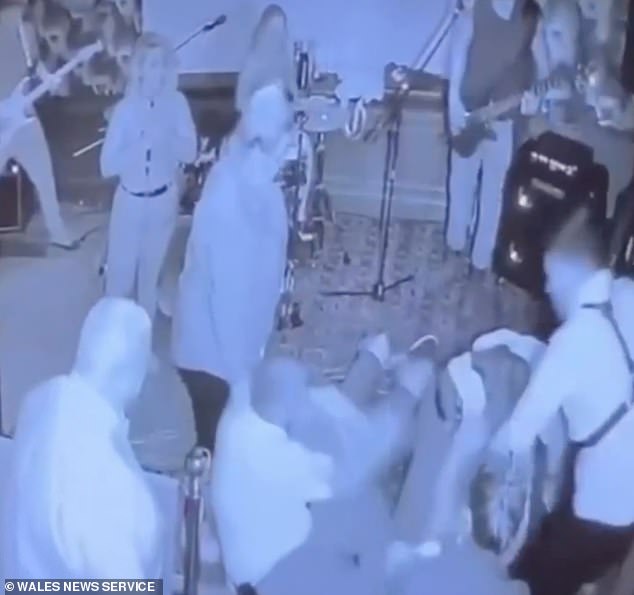 A South Wales Police spokesperson said: ‘At 11.00pm on Saturday (July 17) officers responded to reports of a disturbance at a public house on Albany Road in Cardiff.

‘They have both been released under investigation. ‘

What are the current rules in Wales?

Wales moved into full alert level 1 on July 17 and will have a four-week pause to the easing of restrictions due to the rise of the Delta variant.

If infection rates then remain stable and even more people are vaccinated, Wales will move to Level 0 on August 7.

What has changed from July 17th?

This week Mark Drakeford said that Wales will move fully into alert Level 1 from July 17 – following a four-week pause due to the rise of the Delta variant. If infection rates then remain stable and even more people are vaccinated, Wales will move to Level 0 on August 7.

He told BBC Breakfast: ‘The virus is still with us and we know many people are still anxious about going out and about.

‘Social distancing requirements and mask rules will remain indoors from 17 July. But we will gradually ease masks as the public health risk decreases.’

He added: ‘We are entering a new phase of the pandemic. Cases of the virus have risen sharply since the Delta variant emerged six weeks ago but, thanks to our fantastic vaccination programme, we are not seeing these translate into large numbers of people falling seriously ill or needing hospital treatment.

‘We can be reasonably confident that vaccination has weakened the link between infections and serious illness.

‘But there is still a risk that this third wave of the pandemic could cause real harm – either direct harm from the virus or indirect harm from, for example, people having to isolate.

‘We can move to alert Level 1 for indoor spaces from July 17 and go further for outdoor spaces because we know the risk of transmission outdoors is lower.

‘We are also publishing plans for a new alert Level 0, which will have fewer legal restrictions but which will still need all of us to take steps to protect ourselves.’

If Wales moves to alert Level 0 on August 7, all premises will be able to open and most – but not all – restrictions will be removed and replaced with the ongoing requirement for all organisations and businesses to carry out Covid risk assessments.

There will also be no legal limit on the number of people who can meet others indoors, including in private homes.

Face coverings will continue to be required by law in most indoor public places and on public transport, with the exception of hospitality settings.

Yesterday, revellers in England were given the long-awaited green light to party as clubs across the country threw open their doors for the first time in 16 months to celebrate the arrival of ‘Freedom Day’.

In a night described by some as ‘feeling like New Year’, eager party-goers across England piled onto dance floors for the first time since March last year.

Crucially they were allowed to party without being required to provide Covid passports or negative Covid test results. Face masks are also no longer legally required, and with social distancing rules shelved, there are no limits on people attending.

Venues including Fabric, E1, Ministry of Sound and Egg nightclubs in London, Pryzm in Brighton, Powerhouse Night Club in Newcastle and Moon Acre in Dorset re-opened on the stroke of midnight – the very second that most legal restrictions on social contact were removed.

Residence cook dinner claims he is provide you with the 'tastiest carbonara pasta dish but' - and the straightforward...

1000's of vacationers had been left stranded on Monday after two of the nation's largest airways canceled nearly 1,000...

Covid lockdowns could have triggered an increase in short-sighted youngsters

Kids caught indoors attributable to Covid lockdowns are as much as TWICE as prone to change into short-sighted as...

The U.S.. State Division had been criticized for its 'tepid' response in its investigation into 'Havana Syndrome' that has...