This is the moment police hauled a Ryanair passenger off a flight from Portugal after he ‘argued with cabin crew about wearing a mask’ and threatened to ”’go mental’ while abusing staff’.

Footage shows passengers saying ‘bye mate’, ‘see you later, p***’ and ‘bye c***’ as the unpopular customer was led away by police after landing at Stansted at just after 9pm yesterday.

A fellow passenger on the flight from Faro who filmed the incident said the middle-aged man, who had a ‘south-east England accent’, had been regularly shouting at staff throughout the three-hour flight, including when he was refused a drink. 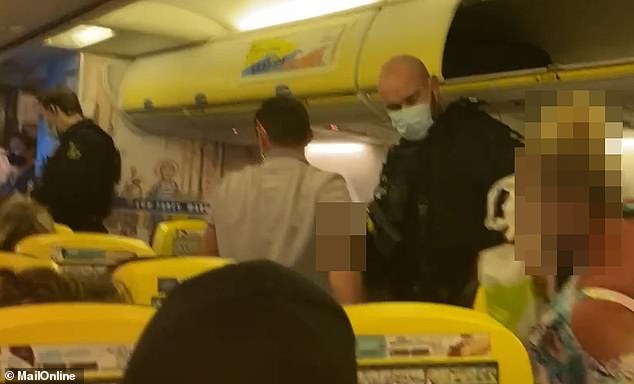 Footage shows passengers saying ‘bye mate’, ‘see you later, p***’ and ‘bye c***’ as the unpopular customer was led away by police after landing at Stansted at just after 9pm yesterday

‘He was complaining about wearing a mask and shouting very angrily saying he’d get them fired,’ the witness – who had visited Portugal with his girlfriend – told MailOnline.

‘He was saying ”I’m going to go mental on this plane”. And when the drinks trolley came around of course they didn’t want to serve him so that made him even more angry.

‘I assume he had been drinking because I don’t know why anyone else had been behaving like that.’

The witness said it was clear the man was going to be trouble even at the gate, and questioned why he was allowed onboard at all.

‘We were queuing up to get the flight back from Faro to Stansted and suddenly there was a loud noisy person in the priority queue.

‘He was there with his partner, a blonde lady. He had a sex toy that he took out and thrust in his girlfriend’s ear.

‘Then he got to the boarding bit where the Ryanair staff and they asked him to put on a mask. He was rowing vociferously with them saying he didn’t have to wear them.’ 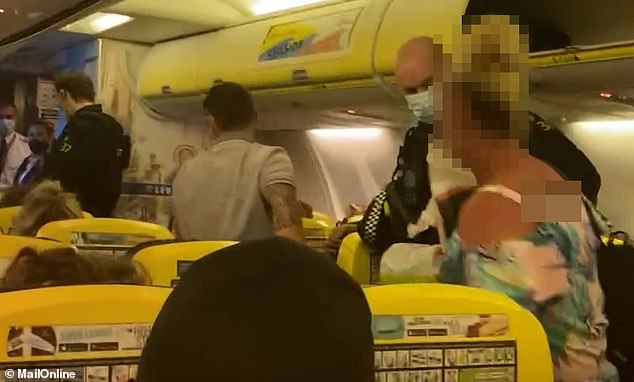 A fellow passenger on the flight from Faro who filmed the incident said the middle-aged man, (in the grey shirt) had been regularly shouting at staff throughout the three-hour flight, including when he was refused a drink

After the flight took off he continued shouting at the cabin crew, the witness said.

‘He got even angrier when the food trolley came round and again when he was refused drinks,’ the witness continued.

‘Eventually his girlfriend gave him a mask but he put it under his chin. He then kept taking it down and point at staff when he did so.’

‘The captain came out at one stage to speak to the air stewardesses. At some point because he was being so rude to him they decided they were going to call the police at the other end.

‘Towards the end of the flight when he hadn’t been allowed alcohol he seemed to get more subdued.’

A police car was on the runway when the plane touched down and the passenger was led away.

‘It was deeply unpleasant being on a plane with someone like that,’ the witness said.

‘He had already caused a problem at the boarding so I question why they him on.

‘I stopped the video too soon but there was a round of applause when he got off.’

MailOnline has contacted Ryanair and Essex Police for comment.

Virginia heads to CWS for 1st time since winning in 2015

Gerard Gallant being hired as New York Rangers head coach, according to reports

Gerard Gallant being hired as New York Rangers head coach, according to reports