This is the moment a plain-clothed police officer grabbed a tree surgeon by the throat before he punched him in the face and wrestled him to the ground during an arrest.

Shane Price, 20, was driving on the A46 between Newark and Lincoln, Lincolnshire, when he claims another driver pulled up beside him and took a picture of him with his wife Sherry, 19.

Video footage shot by Mrs Price as she sat in the van’s passenger seat shows the moment the police officer, who did not appear to show Mr Price an identity badge, pushed Mr Price against a fence and held him by the neck.

The officer has since been ‘removed from normal duties’, according to a Lincolnshire Police spokesman, while the video is investigated.

Footage shows the moment Mr Price pulls his van up alongside the black car as they travel along the A46. The driver makes a gesture as he pulls over and stops the car. 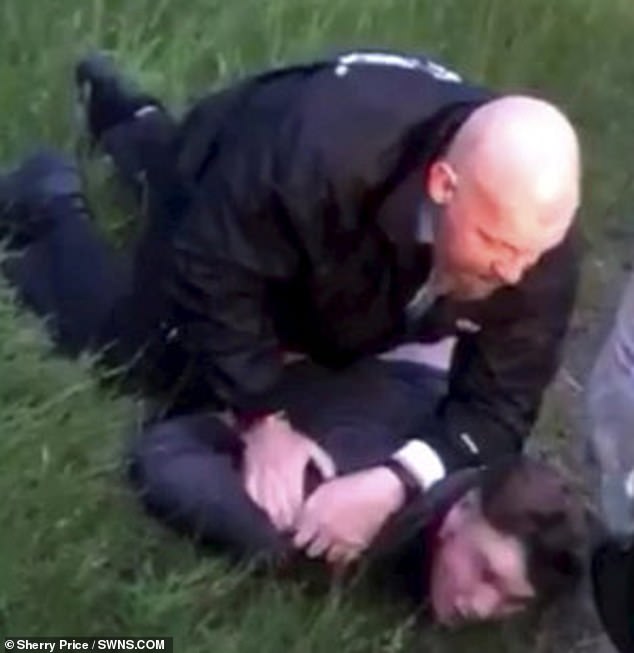 Video footage shot by Sherry Price as she sat in the van’s passenger seat shows the moment the police officer, who did not appear to show Shane Price (pictured) an identity badge, pinned him to the ground on the side of the A46

Mr Price pulls up behind the driver before getting out to speak to him. The driver, later revealed to be a police officer, is wearing a black jacket over what appears to be his uniform.

As he gets out of his car he speaks into a radio. Mr Price starts speaking to the officer when suddenly he puts his hand up to hold Mr Price’s shoulder.

The officer tries to guide Mr Price away from the road, but he resists and the video shows them exchanging inaudible words. Suddenly, the officer forces Mr Price onto the grass verge and holds him against a fence.

As Mrs Price opens the window he says ‘make sure you’ve got this on record’.

Mr Price tells the officer ‘you were on your phone recording us. That’s dangerous’.

He then asks the officer to let go of his throat, which is refused. ‘Get off me. I’ve got a bad foot,’ says Mr Price. ‘Please, I’m begging you. You’re hurting my foot.’ 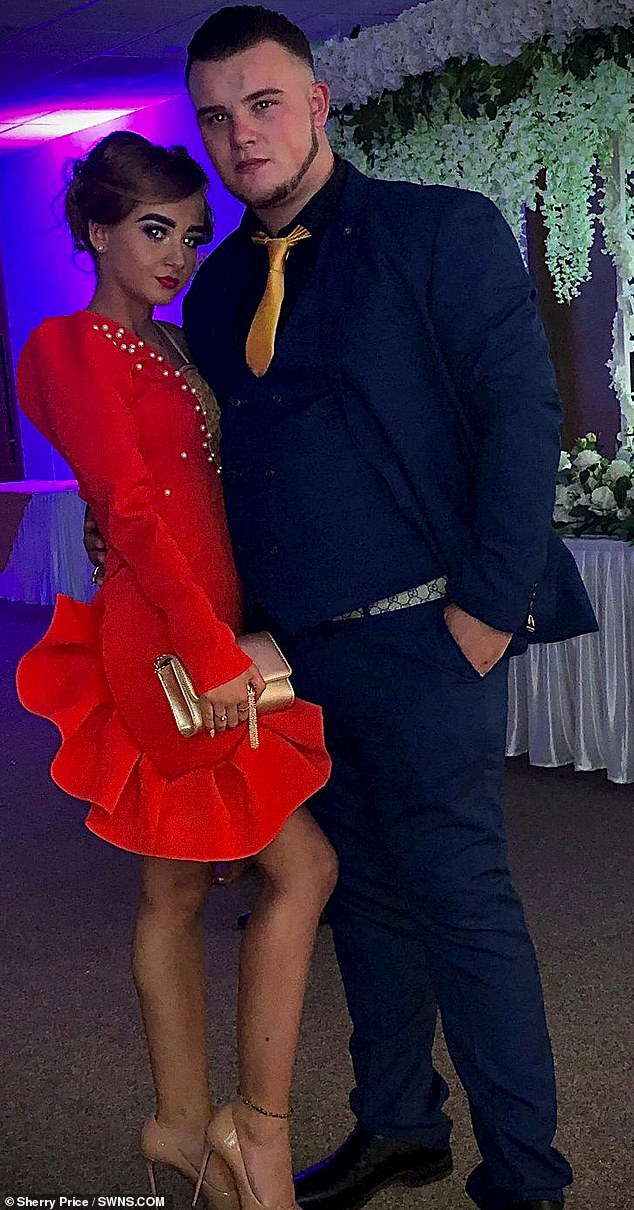 Mr Price (right), 20, was driving on the A46 between Newark and Lincoln, Lincolnshire, when he claims another driver pulled up beside him and took a picture of him with his wife (pictured) 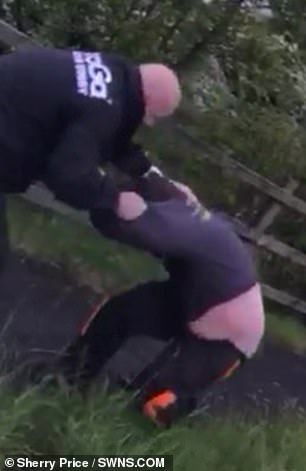 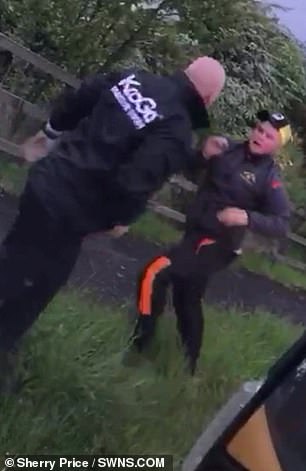 Mr Price, who is a member of the traveller community, says ‘what are you doing’ as the officer stomps on his foot and wrestles him to the ground. ‘That’s assault,’ Mrs Price shouts

‘You just assaulted me for no reason,’ Mr Price adds. ‘Please just get your hand off me.’ The police officer responds ‘stay where you f***ing are’.

As Mr Price gets more irate and repeats ‘get your hand off me’, his wife warns ‘careful Shane’. Mr Price pushes the officers hand off his throat, which causes the officer to punch him in the face.

Mr Price, who is a member of the traveller community, says ‘what are you doing’ as the officer stomps on his foot and wrestles him to the ground. ‘That’s assault,’ Mrs Price shouts.

The officer lands on top of him and swears at Mr Price before saying ‘stay down’.

He says: ‘I hit you because you pushed me.’ Mrs Price can be heard calling the police as the officer lies on top of her husband.

Mr Price shouts repeatedly ‘I can’t breathe’ as the officer tells him to lie on his front.

Mr Price says ‘I’m suing you. You just assaulted me for no reason’. 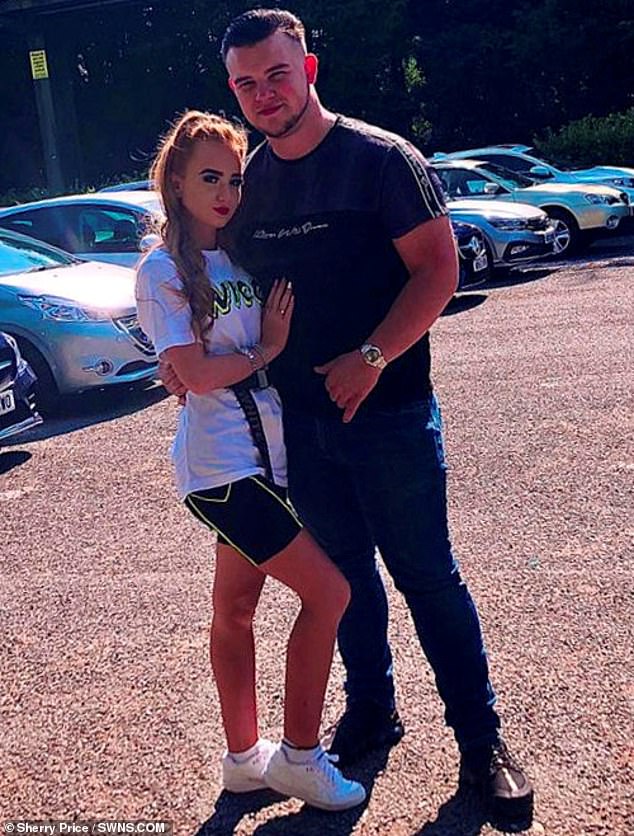 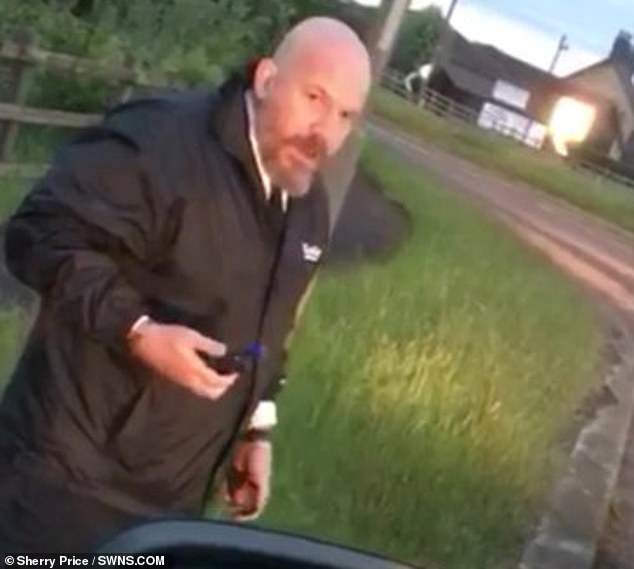 Mrs Price tells the 999 call handler ‘I’ve got it all on video. He’s assaulted my husband. He’s on top of him, he’s got him pinned against the floor. Please hurry up’.

As the video ends the officer gets off Mr Price and goes to his car to get a pair of handcuffs.

The tree surgeon later claimed the officer had tried to take a photo of him as he drove along the road.

He said: ‘Obviously I was concerned about the photo of my wife and I and him using his phone while driving. I flashed him and once I did, he pulled over. I asked him why he was taking photos and using his phone.

‘I told it him was illegal and that he wouldn’t have had full concentration on the road and could have crashed into anything.

‘He then grabbed me by the arm and the back of my neck and pushed me towards the fence. I started to get panicky and scared, I was worried about my wife – I didn’t know what was going on and this gentleman started physical contact with me.’

He claimed ‘at no point’ did the officer tell him he was a member of the police force.

‘He told me ‘if you move, I’m gonna hurt you’.’ Mr Price said after the video ended another police car arrived and he was held for several hours at a police station in Lincoln before being released under investigation.

A Lincolnshire Police spokesman said: ‘At around 9.20pm on Wednesday, May 26, a man in his 20s was arrested just off the A46, near Aubourn.

‘Following this incident, an officer has been removed from normal duties while a review and investigation takes place by our Professional Standards Department.

‘We will not be commenting further while this investigation takes place.’

Mr Price claims the possession of a bladed article accusation relates to the kit in his tree surgery van, which is mostly bladed.

Most popular summer destinations for Americans, per Tripadvisor

A Greenpeace protester has narrowly avoided disaster after parachuting into Munich's Allianz Arena moments before kick-off...