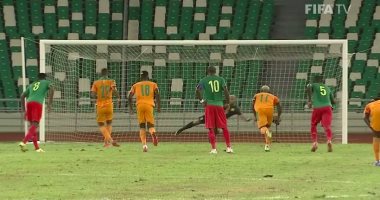 Yesterday, Monday, a limited number of matches were held in various stadiums around the world, most notably the qualifiers for the 2022 World Cup, which were marked by scoring a number of distinguished goals.

The goals of Monday’s matches in the world’s stadiums were as follows:

The Niger national team swept its host Djibouti 4-2 in the match that was held between them at the Prince Moulay Abdallah Sports Complex in Morocco as part of the second round of Group A competitions, the African qualifiers for the 2022 World Cup Qatar.

Djibouti advanced in the 32nd minute through Anas Farah Ali, then his colleague Rasama Hassan added the second goal in the 90th minute, while Niger’s Abdelbar Zakay Adji scored in the 49th and 56th minutes, and Mohamed Wonki in the 65th minute from a penalty kick, then Amadou Sabu in the 68th minute. The latter was sent off in the 83rd minute of the match.

The South African team, led by Percy Tau, the new Al-Ahly player, snatched a fatal victory from his Ghana counterpart, 1-0, during the meeting that brought the two teams together on Monday evening in the second round of the African qualifiers for the World Cup Qatar 2022, where Tao participated in the main against Ghana in his second match. With South Africa in the ongoing qualifiers, after a goalless draw with Zimbabwe.

The only goal of the match came at the 84th minute of the match, through player Hlongwan.

The national team of Cote d’Ivoire won a valuable victory over its Cameroon counterpart, with two goals against one goal, in the confrontation that brought them together, on Monday evening, at the Ebembe Olympic Stadium in the capital, Abidjan, in the second round of African qualifiers for the 2022 World Cup in Qatar.

Sebastien Hilaire scored the two goals of the Ivorian national team in the 20th minute from a penalty kick, and the 29th of the match, while Nicolas Mommy Ndjimalo scored Cameroon’s only goal through a penalty kick in the 61st minute of the match.

8 Dangerous Signs Your Body Is Not Eating Enough Fiber.. Know It

Chewing diet is the fastest way to lose weight and get back in shape.. know how