Monica Lewinsky has opened up about the pain and embarrassment she felt while watching her affair with former President Bill Clinton come to life on the small screen for a new drama series that tracks the circumstances of their relationship – and the sensational scandal that it caused.

The 48-year-old, who served as a producer for Impeachment: American Crime Story, confessed that – despite willingly signing on to help with the creation of the show – she found it incredibly difficult to watch ‘some of the worst moments of her life’ be dredged up for the whole world to see.

Appearing on the Today show on Tuesday morning, hours before the FX series is due to premiere, Lewinsky spoke out about the struggles she faced while ‘wearing two hats’ – that of the show’s producer and that of its main subject.

‘As a producer, I’m very proud. I’m really proud of the project of the show,’ she told Savannah Guthrie.

‘As a subject, I’m nervous. You know, I’m nervous for people to see some of the worst moments of my life and a lot of behavior that I regret.’ 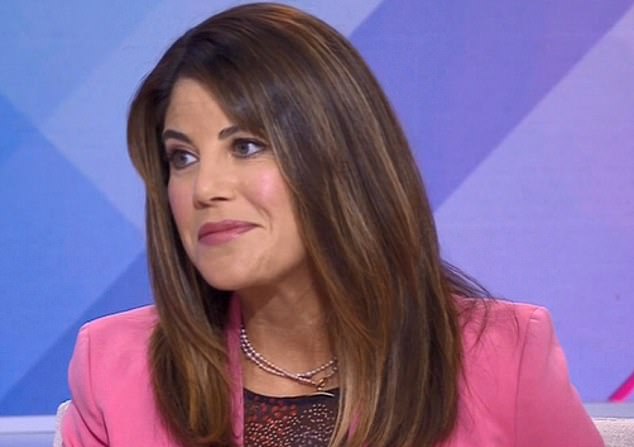 Struggle: Monica Lewinsky has opened up about the ‘challenges’ of working as a producer on a new FX show about her infamous affair with then-President Bill Clinton 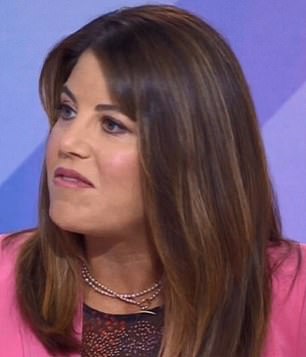 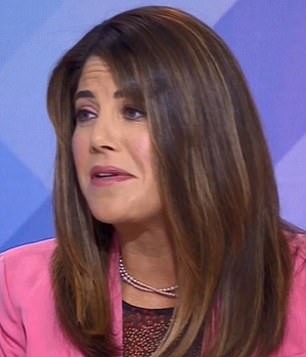 Concerns: The 48-year-old admitted that she is ‘nervous’ about watching ‘some of the worst moments of her life and a lot of behavior that she regrets’ play out on the small screen

Lewinsky famously had an affair with Clinton between 1995 and 1997, with their relationship beginning when she was a 22-year-old unpaid White House intern – and eventually led to his impeachment on December 19, 1998.

The show offers a dramatized version of their romance, as well as the sensational scandal that ensued after the then-President confessed to having an ‘improper physical relationship’ with Lewinsky.

At the time, Lewinsky found herself thrust into the center of a huge scandal – and she quickly became the subject of much criticism and backlash, both online and in the media.

But while she says she has come a long way since the affair, she confessed that it was still incredibly painful to watch the portrayal of it, admitting that there were moments when she wished she could stop her on-screen self from making the decisions that she did.

‘I do not recommend watching your early 20s be dramatized on TV,’ she joked, adding: ‘[There were] moments where I just thought, “Oh, god, don’t, don’t smile back. Don’t talk to her. Don’t confess. Don’t do this, don’t do that. Don’t make bad decisions.”

‘I think that was hard, really hard to see.’

There has already been plenty of speculation about exactly what details will be included in the show – which stars Beanie Feldstein in the role of Lewinsky, while former President Clinton and former First Lady Hillary are played by Clive Owen and Edie Falco, respectively. 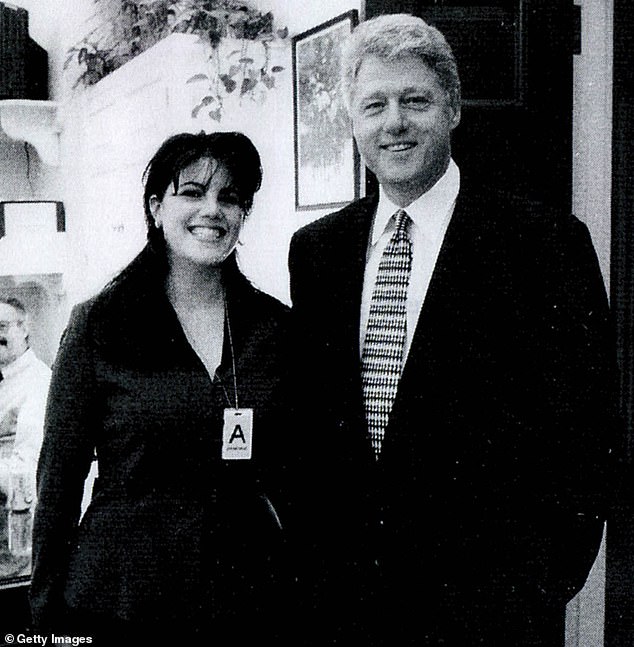 Background: Lewinsky began an affair with former President Clinton in 1995, when she was a 22-year-old unpaid White House intern 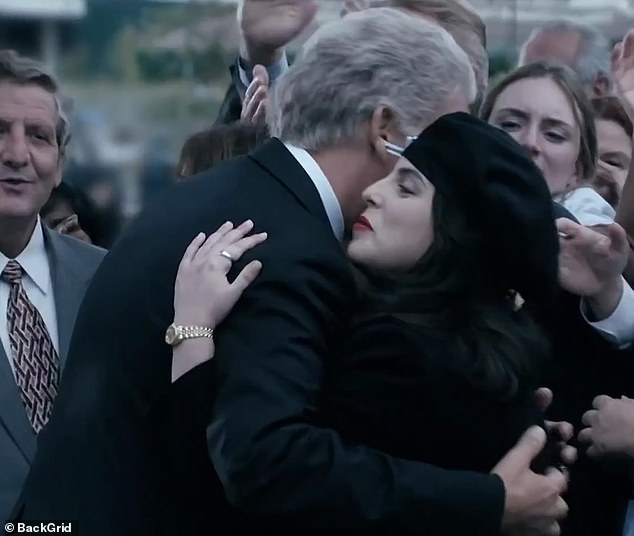 History: Many of the most infamous moments from their relationship – including this public hug and a scene in which Lewinsky flashes her thong to Clinton – will be featured in the show 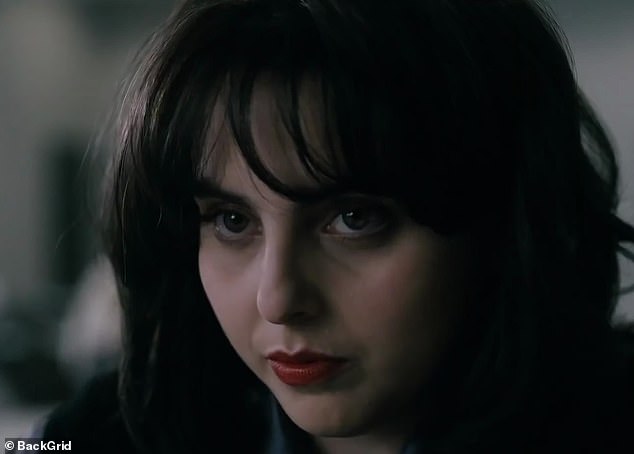 Drama: Lewinsky admitted that it was ‘really hard’ watching ‘the worst moments of her life’ be played out on screen by actress Beanie Feldstein

And while Lewinsky didn’t offer any spoilers, she didn’t hint that the series will reveal a new side to the story – explaining that the show includes certain details that even she didn’t know about at the time.

‘A lot of people know about the story but [many of them] will be very surprised when they watch it [and see] things that they didn’t know happened,’ she said.

‘I myself had… there were so many margin notes I had in the scripts of like, “Did this really happen?” So even I learned things.’

When asked whether she wants Clinton to watch it, Lewinsky confessed that she ‘didn’t know’, faltering in her reply, before simply stating: ‘I don’t even know how to really answer that. Yeah. I don’t… I don’t know.’

However, while she says that she has long moved past the feeling of ‘needing’ some kind of ‘resolution’, she issued a thinly-veiled dig to Clinton when questioned about whether she wants him to apologize to her.

In her role as a producer on the show, Lewinsky had the opportunity to offer notes and guidance – but she insisted that she didn’t have any kind of ‘veto power’, something that made the process particularly ‘challenging’ for her, especially when it came to balancing her professional role and her position as the show’s ‘subject’.

‘No, no, I didn’t [have veto power],’ she told Savannah. ‘I gave notes on the script and [show creator] Ryan [Murphy] was incredible and the team… 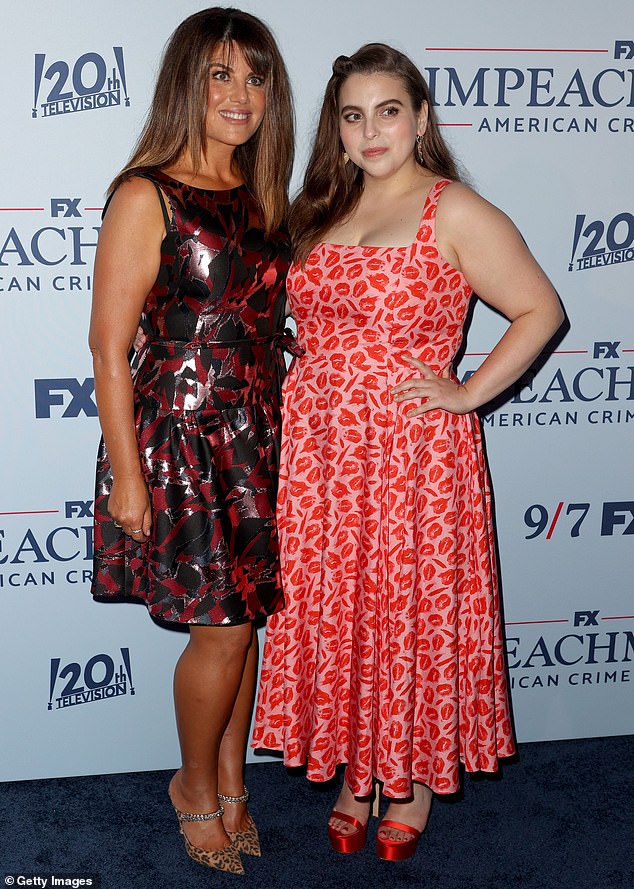 Bond: Lewinsky and Feldstein grew close during the production of Impeachment: American Crime Story and celebrated together on the red carpet at its premiere last week

‘I felt heard, but being heard and listened to doesn’t mean you’re always going to get your own way. So it was challenging at times to wear two different hats as a subject and producer.’

Lewinsky’s unique position also saw her forced to make difficult decisions – including her insistence that a scene about her flashing her thong to the then-President at an event be included, after producers left it out for fear of causing her any further trauma.

According to Lewinsky, while she appreciated their kindness in so far as omitting the infamous moment for her benefit, she knew that leaving it out for her sake would likely raise other questions about the credibility of the series – and the role that she played in it.

‘I did [push for the thong-flashing scene to be included],’ she explained.

‘As a subject, I was incredibly grateful when I saw that it was missing, but I realized as a producer, particularly because I was involved, that the credibility of the show would have been significantly affected and I didn’t think that was fair to anyone else.

‘More than that was really, I shouldn’t get a pass. And that is hard. [I need] a lot more therapy now, but I thought that that was important.’

She also hopes that the show will also offer more ‘truth, context and humanity’, which she believes were ‘really missing’ in 1998, when her affair with Clinton was made public.

‘I think truth and context were really missing at the beginning of 1998 – and throughout the process – and humanity, and I hope that those are all things that we brought to the show,’ Lewinsky added.