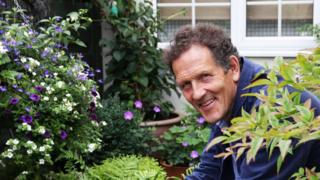 Monty Don: “Wildlife and nature are outside your back door”

We all need a bit of soothing from time to time, and the chances are that mid-pandemic, many of us are feeling the strain.

He wants us to look up, look outside and put our phones down.

“I live in the middle of the country, but whenever I’m in a city, the thing I notice most – and which shocks me most – is how many people are walking along with headphones in, looking at a phone,” he tells BBC News.

“They’re not noticing anything at all – the weather, the sky, any other sounds. And that has to be bad for you. It has to be.

“I think the great lesson to be learned is opening ourselves up, pay attention to what is actually going on.”

Don’s dogs are a regular feature on Gardeners’ World [pictured with Nellie and Nigel, who died earlier this year]

Don, who has been broadcasting and writing about gardens since the 1980s, thinks we are “becoming divorced from nature”.

“We’d see these fabulous programmes on television, showing the plight of the snow leopard, or the melting glaciers.

“And because they’re so good, and so interesting, it becomes fixed – it becomes something that’s happening elsewhere.

“What I want to stress is that wildlife and nature and the environment is here, on your back door, now – outside your window.”

Don’s latest book, My Garden World, is a homage to the Herefordshire countryside on his doorstep and his farm on the Welsh borders. He writes about his changing surroundings month by month, from spiders to sparrows, worms to wood sorrel.

Written in the present tense, it is a mindful journey through the beauty of his surroundings, interspersed with nuggets of information. You learn that grass snakes’ survival technique is to give off a repulsive smell rather than attack you, which is a blessing of sorts.

Grass snakes have an unusual way of repelling predators

He thinks it’s important to learn about nature, saying: “One of our modern evils is that knowledge is so accessible that we tend to have a little learning and not much depth.

“What took time in writing the book was research. So I’d go and read a book about voles or read two or three books about migration. I figured, if I understood it, the reader would understand it.”

But if we follow his advice to put down our phones, step outside and sniff the air, what will this actually do for us?

For Don, it’s all about the sense of wellbeing that comes from establishing a connection with nature.

Being outside is vital for Don’s mental health

His journey with depression is well-documented, and he tends to find it tougher as the daylight recedes.

“I have for many years, suffered from depression, which comes and goes but tends to be something that is worse in winter,” he explains.

“And, touch wood, it’s been much better for the last few years. “But for me, the benefits of nature are all about the physical connection with the rhythm of the natural world.

“Some of that rhythm is bleak – winter is cold. And yet even if inside you are bleak and grey and cold, if you believe that spring will blossom inside you, as well as outside in the garden, that’s powerful.

Sparrows are a common sight in many gardens and parks

Not everyone has a garden, though, something Don is quick to acknowledge.

“I think the latest figure I saw is that 83% of British people have a garden or access to one. But that actually means that millions don’t. And so that’s a big number, but the vast majority do.”

For anyone unable to access their own small patch of green, Don says just look out of the window.

“We’ve all got windows, and the sky is fascinating, as much part of the garden as the ground. So notice what birds are in the sky. Also be curious, name them, find out. It’s not hard,” he says.

“The more you find out, the more you realise there is to know. And then that becomes fascinating. And then you start looking and then you’ll start recognising.”

He also suggests exploring local streets and parks, saying: “For some it’s easier than for others. But our streets have trees in them, you don’t have to go to the far flung corners of the world to engage with the natural world.”

Many people’s pets, especially dogs, bring them into contact with nature, for walks or in their garden.

He is sanguine about his loss, saying it’s important to “allow yourself to grieve and don’t be ashamed of that, you know, they’re loved”.

He adds that given a dog’s lifespan is generally between about nine and 14 years, “in the case of Nigel, he had a long and good life”.

“So allow yourself to feel sad, but at the same time, rejoice. You had this lovely relationship. It enriched you and it’s never going to go away, no one can take it from you.”

During lockdown, some people spent much more time not only with pets, family or housemates, but also with nature, during their allotted hour of outdoor exercise.

Many commented on how much they noticed birdsong.

“One of the side effects of the pandemic, which was very noticeable in my own garden, was for the first time you could really hear the birds – there were no planes or cars. And for a couple of months, it was quiet. And that was extraordinary,” he says.

“That was an unexpected silver lining for what was an extremely stressful time for everybody.”

Lockdown also brought lots of people together, whether it was clapping for the NHS, helping each other with food parcels or family Zoom sessions.

Gardeners’ World was no exception, and more than 10,000 people sent in videos of themselves in their gardens, in the hope of being included on the show.

Why is it such a popular slot?

“Well, we all love seeing other people’s lives. In Britain, back gardens are fiercely private, or we’d like them to be – sometimes they’re overlooked of course,” he says.

“But we are a nation of gardeners, and our gardens are our castles. So to be invited into someone’s garden is an act of hospitality. It’s quite an intimate thing to do. But it’s quite a generous thing to do. And so immediately you feel welcomed and privileged.”

He says the videos are always “positive stories” and adds: “I think these short little films, no longer than two minutes, are just touches of life, that shine a torch and are bright.

“And maybe people say, ‘I feel those things too’, and it’s shared humanity. And it’s that feeling that we all long for, that fundamentally people are good and decent and doing their best. And we’re all in this together.

Monty Don’s My Garden World is published by Two Roads and is out now.

Johnny Nash, whose song I Can See Clearly Now topped the charts in 1972, dies at 80