Moose sticks its head through an Alaskan woman’s bathroom window


A homeowner got the shock of her life when a giant moose poked its head through her open window.

The curious creature only stayed for a few minutes which was long enough to pose for a snap. 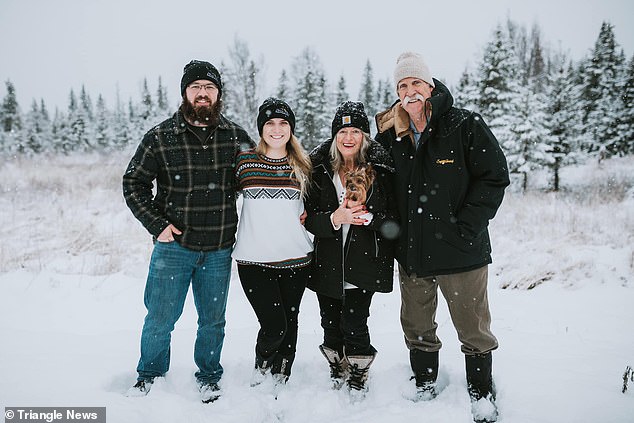 Christina Smith, pictured centre right with husband Don, daughter Donna and her partner Hunter, left, at their home in Homer, Alaska, has described the area as her ‘heaven on earth’ 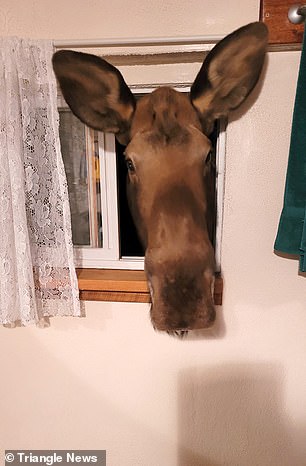 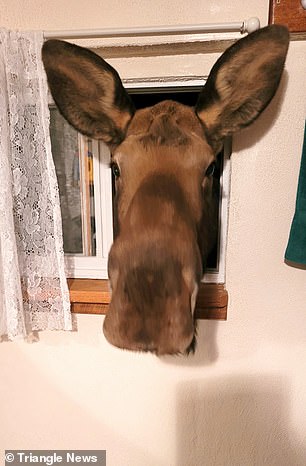 The curious moose stuck its head in the window of Ms Smith’s bathroom in Homer, Alaska

She joked: ‘I love the privacy of my bathroom, but this cheeky animal doesn’t care if I am using the toilet or not.

‘We have several windows here, and love that they come to visit, but this was a total shock.

‘Normally I hear the animals walking to the house.

‘I get up and watch them, but on this occasion is was a total surprise.’

Cristina – who lives with husband Don, daughter Donna and her partner Hunter in Homer, Alaska, – added: ‘This is my heaven on Earth.

‘My favourite luxury is the view with the animals that I get almost every day.’

The north American moose weighs between 800lbs for a small female to 1,600lbs for an adult male.

The male animals have large antlers which are prized by trophy hunters.

The moose will live to about 16 years in the wild.

They are targeted by wolves and bears.

On average a female moose will rear one calf a year – although when food is plentiful they may have twins.

In November, 2021 Joshua Dennis, 12, had been cycling through Hatcher Pass, which lies in the Talkeetna Mountains, with his friends Weston, Caiden, Nathan, and Vannin when a moose animal ran out in front of them.

The mountain biker, who was leading the pack, was able to brake just in time to avoid colliding with the animal, which was just inches away from him.

During the clip, Joshua, who runs the YouTube channel AllOutdoorsAlaska, and his friends ride their bikes down a narrow cycling path.

Just moments later, an enormous moose runs in front of their path and forces Joshua to brake in order to avoid crashing into the creature.

As the animal runs away, Joshua looks back at his friends before saying: ‘Oh my God! That moose just ran in front of me. I am out of here!

Joshua’s mother Lisa Dennis said: ‘Joshua had adrenaline pumping through his veins and was excited and scared at the same time.

‘When the moose passed by, the odour was still lingering in the air from the wild animal.’

Also in November, students, teachers, and parents at a Canadian elementary school were shocked when a nearly-800lb. moose smashed through a glass window and settled into classroom full of children on Thursday.

The confused animal had wandered away from its nearby natural habitat and appears to have ‘panicked’ and smashed its way into the Sylvia Fedoruk School in Saskatoon, Saskatchewan, where children were quickly ushered away, according to the CBC. 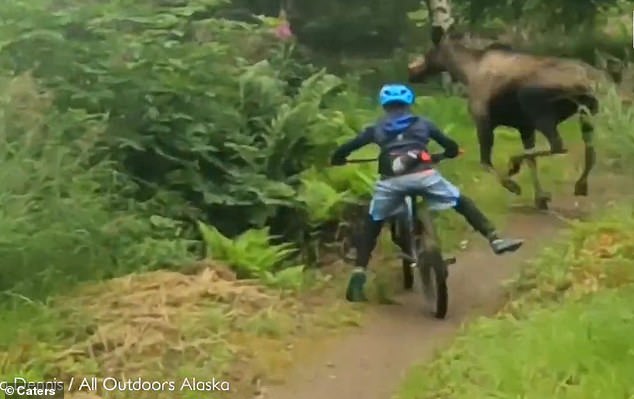 Only one child sustained minor injuries, and the moose was soon tranquilized and released back into a safer area — and locals are now calling it ‘a quintessential Canadian story.’

Moose, which are the largest of all the deer species, are often found across North America, Europe and Asia.

The animals typically feature a large nose and upper lip and adult males can be recognised by their antlers, which can spread 6ft from end to end.

Despite their large size, the wild animals can run up to 35 miles an hour over short distances and some have even been spotted swimming several miles at a time. 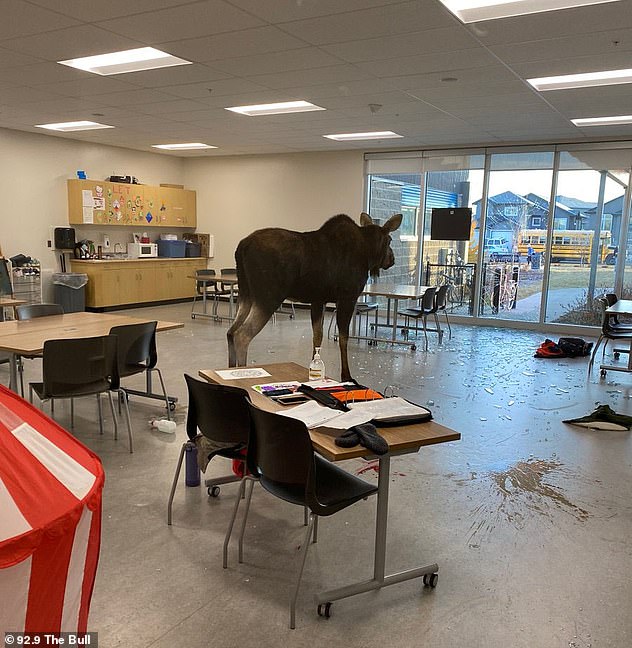 Looking to learn? A nearly-800lb. moose smashed through a glass window of an elementary school in Saskatoon, Saskatchewan on Thursday

In anticipation of the Iraqi parliament session on Sunday, the Al-Halbousi and Al-Khanjar blocs form a new Sunni alliance | Politics news

Should you buy SHIB on January 6 after its recent developments?

Should you buy SHIB on January 6 after its recent developments?