We all know it as the game show that has arguably captured the public imagination more than any other.

With a £1 million prize — the largest sum ever offered by a television quiz — Who Wants To Be A Millionaire? swiftly became a television phenomenon after the first episode was broadcast in September 1998.

Yet it is maddeningly difficult to win the top prize: in the past 22 years only six have managed it — fewer than those who have walked on the moon. The latest, Shropshire teacher Donald Fear, clinched £1 million in September this year. Now, a fascinating TV series hears from the five previous winners, who recall their journey to the jackpot. 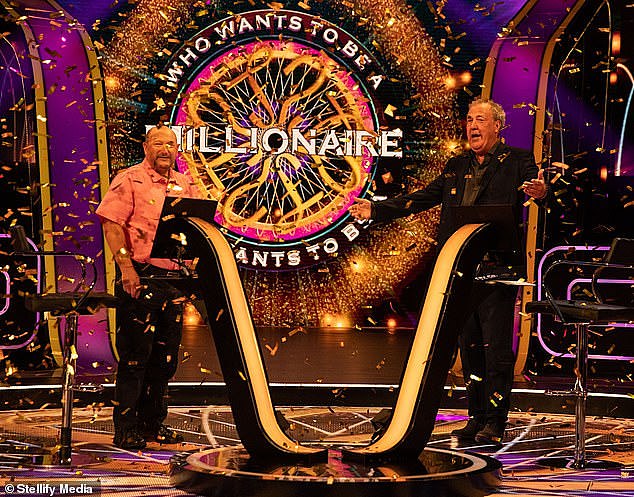 BACKGROUND: Separated from second husband Neil, the mother of three from Fulham, South-West London, had spent around £100 ringing the show’s contestant line in a bid to secure a place.

‘I remember targeting one particular day and dialling over and over again,’ she recalls. ‘BT rang me up and asked me if I realised my telephone bills were rising.’

NERVES? Yes. ‘I found it absolutely terrifying. My heart thumped from the moment I got on to the moment it finished,’ she says.

So palpable were her nerves that host Chris Tarrant admits he ‘never thought for a minute’ that she would become the first million-pound winner. 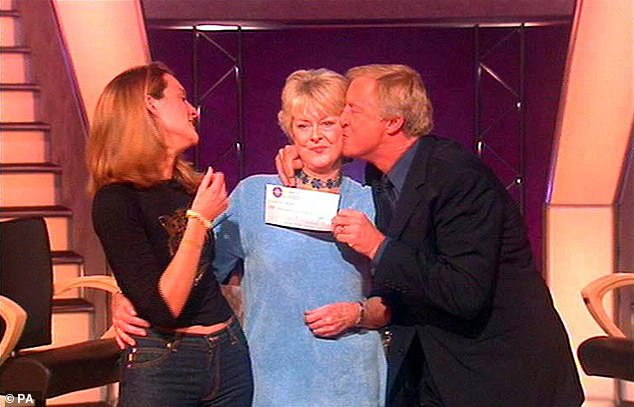 Judith Keppel, now 78 went on the the show in November 2000 and spent around £100 ringing the show’s contestant line in a bid to secure a place (pictured)

STRATEGY: Deploying lifelines carefully. ‘I thought the audience was good for pop culture questions, and then you should ask the friend if it’s someone you think would definitely know the answer,’ she says.

This came good when she phoned a friend at the £125,000 question stage asking them to complete the line: ‘exit pursued by a . . .’

The answer is bear, which her friend happily knew instantly.

NOTABLE FOR: Her aristocratic lineage —through her great-grandfather Arnold Keppel, the 8th Earl of Albemarle, Judith is third cousin to Camilla Parker-Bowles. Judith was a long-awaited jackpot winner — two years and 120 shows.

MILLION-POUND QUESTION: ‘Which king was married to Eleanor of Aquitaine?’ — a question which she admits ‘made the hairs stand up on the back of my neck.

‘Just two months before the programme, I’d been in France and visited an abbey church that was completely empty except for these four tombs.

‘One of them was Eleanor and next to her was her husband, Henry II. It was quite spooky in a way,’ she says.

WHAT SHE DID WITH THE MONEY: ‘It made a huge difference to me,’ she says. ‘I wasn’t completely skint but I was a bit worried about money, so I just felt this huge amount of relief.

If I was much younger, I might have gone out and bought a huge Lamborghini but, instead, I regarded it as a wonderful pension pot.

‘I invested most of it, although I did upgrade my car — but only to another modest car. I had always been planning to live in France, so eventually I bought somewhere out there and for ten years I lived there seven months a year.’

WHAT IS SHE DOING NOW: Back in the UK, for 17 years she has been a regular on BBC2 quiz show Eggheads. She lives alone in London.

BACKGROUND: A physics teacher from Staffordshire, married to deputy head wife Viv, and father to Richard 41 and 38-year-old Louise.

A 1990 mastermind champion, he deployed a mathematical approach to getting on to Millionaire, working out that you needed to make 500 calls to their phone lines to get a better-than-evens chance to get on, and paying his son Richard to do the leg work.

‘I thought of it as a sort of investment rather than a gamble,’ he says. He also trained for the Fastest Finger using a concertina and a stopwatch.

NERVES? No. ‘I don’t remember feeling at all apprehensive,’ he says. ‘The excitement of the situation trumped the nerves.’

STRATEGY: ‘Once I got past the £32,000 question, I was always going to err on the side of recklessness, not caution.’

NOTABLE FOR: Endlessly apologising to Viv — who was in the audience — for taking risks and using all his lifelines on one question, in his case the £125,000 question asking whether the real name of Jack Straw was John, James, Justin or Joseph.

The answer is John but, while David had two Uncle Jacks who had both been born John, he felt he could not make that assumption.

‘The question wasn’t what Jack is usually short for but what it was short for on this occasion,’ he says. ‘I hated that question. If I could have a fiver for every time someone says everyone knows the answer to that, I would be a richer man.’

MILLION-POUND QUESTION: ‘If you planted the seeds of Quercus robur, what would grow?’ The options were trees, flowers, grains and vegetables.

‘I was fairly certain it was a tree,’ says David. ‘A few months earlier one of my students was doing a project on trees for his A-level and I remember reading in his report something about Quercus.

‘So if Lewis is out there, thank you very much.’

WHAT HE DID WITH THE MONEY: David had hoped to bank six figures to enable him to take early retirement and, having secured seven figures instead, he and Viv did just that, as well as paying off their mortgage and, in time, moving to a slightly larger house nearby, spending around £100,000.

Then it was just ‘lots of fun’. ‘We have gone to places we otherwise wouldn’t have been able to go to.

We’ve threaded our way through icebergs in Antarctica, we’ve dodged polar bears in Svalbard, and ordered cake in Welsh in Argentina — lots of things we’d never have dreamt of being able to do.’

They also bought some land in France and built a house.

WHAT HE’S DOING NOW? He and Viv still live in Staffordshire, where David’s million-pound cheque — returned to him by the bank — is framed and hanging on the wall.

WHEN: September 2001 — just 11 days after the ‘coughing major’ Charles Ingram had won his (later disputed) million.

BACKGROUND: Then a 47-year-old retired City banker and father of two, Robert was already the owner of a £2 million London townhouse and a £1 million country retreat near Hampshire, while he and wife Marilyn’s ten-year-old son and eight-year-old daughter attended private school.

Their apparent wealth sparked controversy among viewers, some of whom deemed his win unfair against the backdrop of his wealth.

FASTEST FINGER: ‘Put these TV soaps in the order they were first seen: Brookside, Coronation Street, Emmerdale Home And Away.’

Robert did it in 5.67 seconds. (The answer is Coronation Street, Emmerdale, Brookside, Home And Away.)

NERVES: None whatsoever. Chris Tarrant described Robert as ‘a bit like a poker player’ — ‘very laid back and quite cool’.

STRATEGY: Trusting his intellect and answering when he wasn’t entirely sure: for his £125,000 question — which asked which of the four names Graham, George, Gordon and Gerald is a type of flour — Robert correctly answered Graham because he had heard of Graham crackers and ‘nothing else sounds remotely right’.

NOTABLE FOR: Despite his moneyed credentials, having to ask the audience which car manufacturer the DB range was associated with for the £16,000 question (Aston Martin). 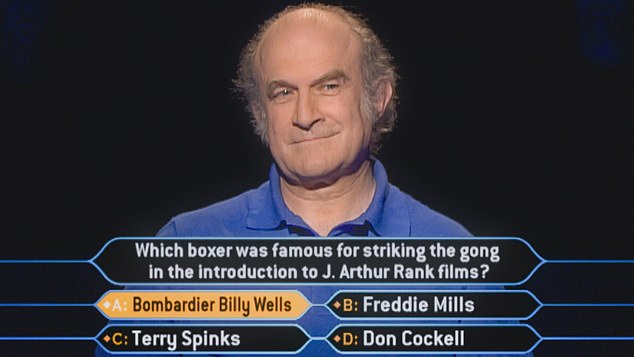 Yet it is maddeningly difficult to win the top prize: in the past 22 years only six have managed it — fewer than those who have walked on the moon (pictured, contestant Ingram Wilcox)

MILLION-POUND QUESTION: ‘Which scientific unit is named after an Italian nobleman: Pascal, Ohm, Volt, Hertz.’ The answer is Volt, the nobleman is Alessandro Volta.

WHAT HE DID WITH THE MONEY: He is is understood to have taken a masters in Shakespeare at Birmingham University and told a journalist he had planted a lot of truffle-inoculated oak trees (their roots dipped in a special puree to encourage truffle growth) in his garden.

He returned to Millionaire in 2003, playing for charity with Judith Chalmers, and won £32,000, having answered the £250,000 question incorrectly.

WHAT HE’S DOING NOW: Unknown. He declined to take part in the new show.

BACKGROUND: A software engineer from Galway, Ireland, now living in Wigan, married to Shelagh and with two grown-up children.

NERVES: Hidden. Externally cool, he admits now that inside he was ‘wound up like a top’ but told himself he was on a mission.

‘I felt like I was a soldier who had been dropped behind enemy lines, and I just had to get on with it.’

STRATEGY: One question at a time and use your lifelines well. ‘I was determined to be methodical, like a man climbing a cliff,’ he says. ‘I kind of had tunnel vision.’

NOTABLE FOR: Arriving at the million-pound question with two lifelines.

MILLION-POUND QUESTION: ‘Which of these is not one of the American Triple Crown horse races? Arlington Million, Belmont Stakes, Kentucky Derby, Preakness Stakes.

As he worked on software associated with betting systems, Pat was ‘fairly confident’ he knew the answer but realised it would be madness not to use his lifelines.

He used his 50/50 lifeline to remove Belmont Stakes and Preakness Stakes from the answers before phoning a friend, who told him he was 90 per cent sure it was the Arlington Million.

‘Only afterwards did I realise I used the lifelines in the wrong order. You should always give the four options when you phone a friend,’ he says.

WHAT HE DID WITH THE MONEY? ‘There were no yachts or racehorses — I’m a bit boring like that,’ he says. ‘We didn’t even move to a new house.

It was more about securing our long-term future. The main thing it allowed me to do was go part-time in my job, working one week on, one week off.

‘There was actually just a great satisfaction in winning. I hate losing so much that it’s a wonder I enter anything at all.’

WHAT IS HE DOING NOW? Pat has gone on to have a distinguished career in quizzing. Now the second-highest ranked quizzer in the world, he is also a panellist on Eggheads. In 2010, he was crowned Mastermind Champion of Champions, with a 100 per cent top score.

THE ONE WHO NEARLY PULLED IT OFF

Perhaps the most infamous quiz show contestant in history, in September 2001 British Army major Charles Ingram looked to have become the third person to have won the jackpot before suspicions were raised about the manner of his win.

While reviewing the recording, the production team made a connection between Ingram’s answers and coughs coming from a waiting contestant, lecturer Tecwen Whittock.

His payout was suspended and in April 2003 Ingram was convicted on a single count of procuring the execution of a valuable security by deception and received a suspended18-month jail sentence. The scandal was dramatised this year in ITV’s acclaimed series Quiz.