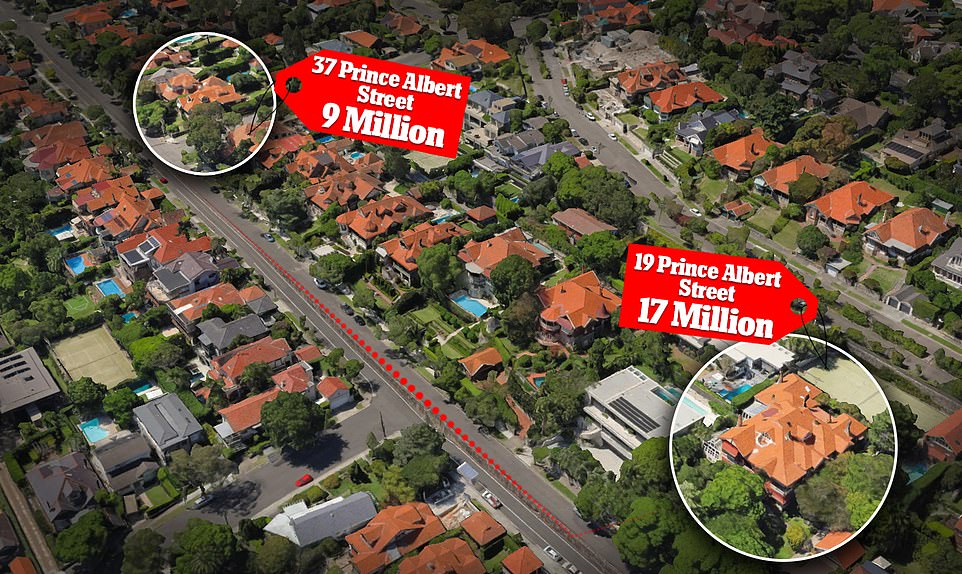 
Lucky timing has seen two families in one of the most prestigious streets in Sydney buy each other’s homes in the ultimate house swap.

Gary and Mary Smoker sold one of Sydney’s grandest mansions – the opulent 1905 ‘Ardagh’ in Prince Albert Street, Mosman – for $17 million to Steve Picton and Kathryn Harris in December.

The Smokers then bought and moved into their buyers’ five bedroom home, which was also for sale, on the same street for $9 million.

An aerial view of the two homes involved in the ultimate up-market house swap which took place in Prince Albert Street, Mosman recently

Gary and Mary Smoker’s extraordinary three-storey, 20 room ‘merchant mansion’ was built in 1905 and sold to Steve Picton and Kathryn Harris for $17 million

The Smokers then bought and moved into their buyers’ five bedroom home (pictured), which was also for sale, on the same street for $9 million

While the word ‘downsize’ doesn’t seem exactly right when moving into $9million, 1909 Federation home on 1059 square metres, the Smokers – both in their 70s and retired – are now surely going through an adjustment to their smaller house.

They had lived for 25 years in the sweeping three-level ‘merchant mansion’ – which has 20 rooms, ‘park-like gardens’, a huge tennis court, a 20 metre pool, a separate two storey ‘coachouse’ and is set on 2770 square metres.

The top-floor living area of Ardagh is over 100 square metres – bigger than some million-dollar inner Sydney apartments.

Until recently the home used to have its own downstairs ballroom.

Pictured: One of the huge upstairs living areas at the ‘merchant mansion’ Ardagh on Prince Albert Street

Ardagh on Prince Albert Street, Mosman has a dining room fit for royalty

Ardagh was built in 1905 by renowned Colonial developers Sydney Cabban and William Smith and only changed hands six times in the past 100 years. The Smokers bought it in 1993 from former concert pianist John Champ for $2.4 million.

The new smaller residence the Smokers bought from Mr Picton and Ms Harris is just 400 metres away.

Mr Picton and Ms Harris bought that in 2019 and finished restoring it in late 2020 when they noticed their neighbour’s palatial property was on the market.

Another upstairs living area at the $17million mansion sold by Gary and Mary Smoker to their Mosman neighbours, Steve Picton and Kathryn Harris

Opulent living: this is what the conservatory of a $17million home looks like

While the Smokers gave up a lot of space to move into Mr Picton and Ms Harris’s former home, they will still enjoy magnificent views of the city and Sydney Harbour Bridge.

‘The two families did not know each other – it was just serendipity that the Smokers were looking to downsize,’ said the agent who sold both homes, Richard Simeon.

‘Homes like Ardagh come up once very, very rarely – maybe every 20 years or so,’ he said.

‘Mr Picton and Ms Harris inspected it and said “oh my god” – they fell in love. They have a passion for federation homes and this is the ultimate federation home.’

Mr Simeon said the new owners basically took on a guardian role of Ardagh with the purchase.

‘The people who buy a home like this become its custodians for 25 years. It’s the epitome of a generational home.

The Smokers have owned three multimillion dollar historic homes in Prince Albert Street in the past 25 years. This one sold for $6.6 million in 2011

‘It’s a once in a lifetime thing, after all, where do you go after somewhere like Ardagh?

‘Now they have a piece of Sydney’s history, so they will restore it back to its original look from the early 20th-century when people could only get across the harbour by ferry.’

This the third home the Smokers have owned in the same street: they previously owned another five bedroom home in Prince Albert Street, which sold for $6.6million in 2011.

‘They obviously have a passion for remaining in this area,’ Mr Simeon said.

The buyers did not want to be interviewed.