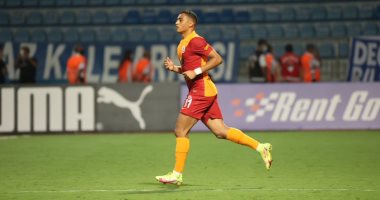 Egyptian striker Mostafa Mohamed, striker of the Turkish Galatasaray team, stressed the importance of winning against his guest, the Italian Lazio team, which will start at 7:15 pm today, Thursday, at the “Turk Telecom Arena”, in the first round of Group E competitions, from European League competition for the current season 2021-2022.

The Egyptian striker, Mostafa Mohamed, is sitting on the bench of his Turkish team, Galata Saray, in his strong confrontation against his guest, the Italian Lazio team.

The Egyptian striker said in statements before the start of the match: “A very important match for us, we miss our fans a lot, it is the first time we have played against them in our stadium.”

He added, “We hope to get three points from this match and share a good place in the group. It is a difficult group. Galatasaray is a great team and we will be in a good place.”

The Turkish team seeks to win the three points of the match, taking advantage of the ground workers and the public, especially since the match is at its home and at the beginning of its career in a difficult group that includes Lokomotiv Moscow of Russia and Marseille of France.

Galatasaray is experiencing volatile periods, as it enters the match against its guest Lazio, after he succeeded in achieving victory in two out of the last 5 matches he played in the last period at the level of all local and continental tournaments, and was subjected to a loss in only one match and fell into a draw in two matches..

While the Lazio team is experiencing good periods and will enter the match against its Turkish host, after it succeeded in winning two out of the last 3 matches it played in the last period in the Italian Football League, and in return, the Lazio team suffered a loss in only one match.