Mother, 27, ‘killed her two daughters, one and three, before taking her own life’ at Bolton home


A mother may have killed her two young daughters in a murder-suicide after all three were found dead at home.

Tiffany Stevens, 27, was found dead along with Darcey Stevens, one, and Casey-Lea Taylor, three, at their home in Little Lever, Bolton on January 21, 2019.

After Darcey and Casey-Lea died their respective fathers paid tribute to them.

Casey-Lea’s father Liam Taylor said: ‘Casey-Lea was a beautiful little girl who was deeply loved by many and will be sadly missed by a lot of people.’ 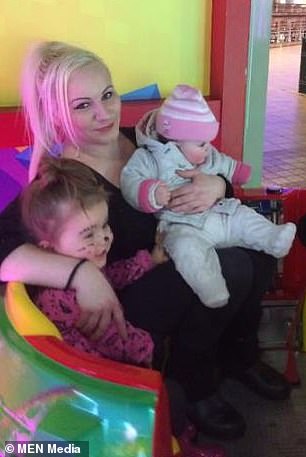 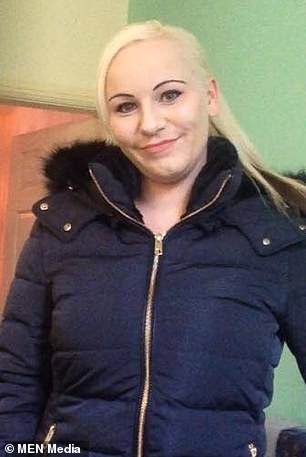 Tiffany Stevens, 27, and her daughters Casey-Lea, three, and Darcey, one, were discovered at home in Bolton. Concerns had been raised for the welfare of Tiffany Stevens 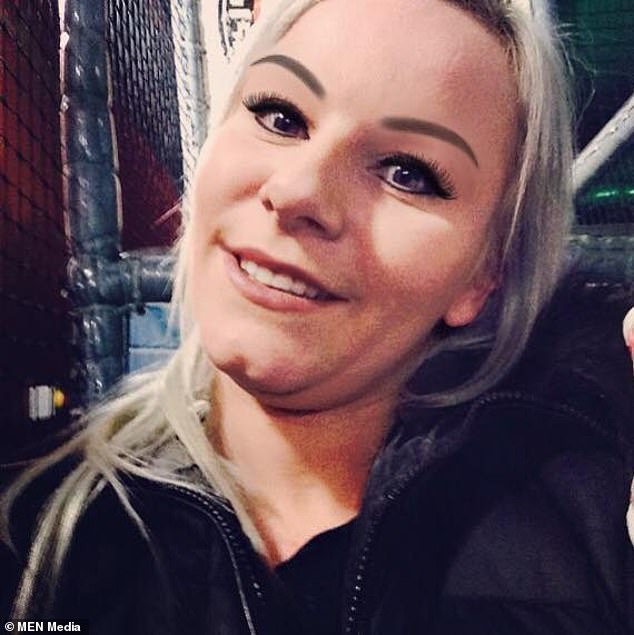 Tiffany Stevens may have killed her two young daughters in a murder-suicide after all three were found dead at home, an inquest in Bolton heard today 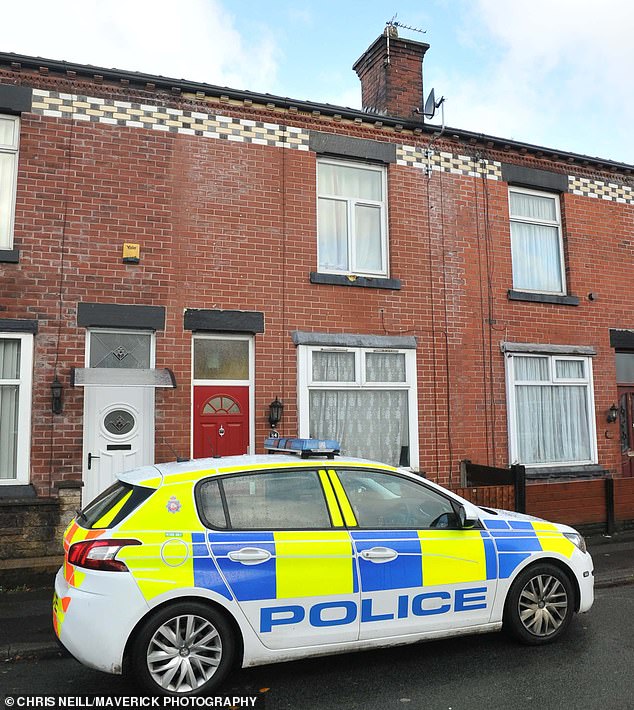 Pictured: A police car parked outside the Stevens family home in Little Lever, Bolton, after the deaths

‘She will always live on through me.’

Greater Manchester Police (GMP) treated Darcey and Casey-Lea’s deaths as murders but said they were not looking for anyone else in connection with them, while Tiffany’s death was not treated as suspicious.

Assistant coroner Peter Sigee told a pre-inquest review hearing at Bolton Coroners Court today that he may have to consider conclusions of ‘unlawful killing’ in regards to Darcey and Casey-Lea.

He said: ‘I’m going to have to consider whether Tiffany had capacity at the time of Darcey and Casey Lea ingesting the substances that caused their death,’ he said. 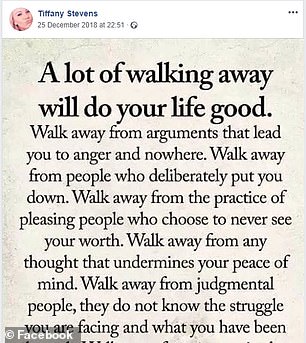 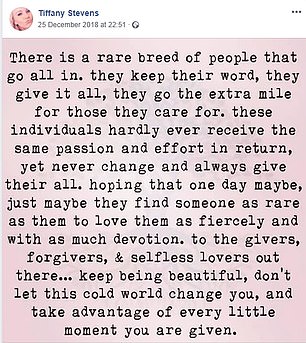 Before she took her own life, Ms Stevens posted a number of motivational posts on her Facebook page. One read: ‘Don’t let this cold world change you, and take advantage of every little moment you are given’ 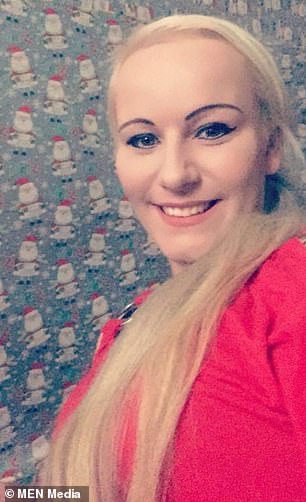 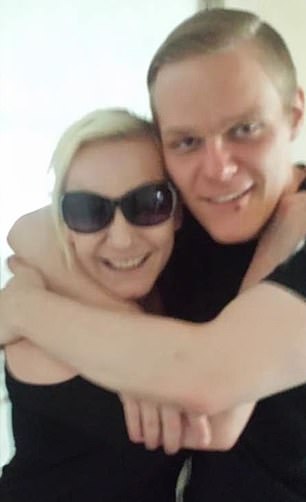 ‘If she did have capacity and administer substances that caused the children’s deaths, I would have to consider whether the two children were unlawfully killed.

‘This is one of the saddest cases that I have had to consider and deal with in my time as coroner.’

Mr Sigee added he may also have to consider a conclusion of ‘suicide’ for Tiffany.

Addressing the Stevens family, he said: Mr Sigee added: ‘These deaths are so linked that it is sensible for all three inquests to be heard at the same time.’

On the evening the girls and their mother died, Tiffany’s brother and ex-boyfriend were allegedly heard shouting outside. 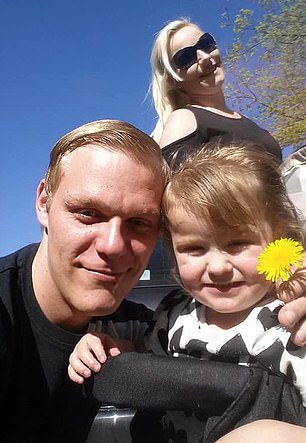 The family were known to social services and Bolton Council officials had been in touch with Tiffany before her death.

In comments made on Facebook, Ms Steven’s brother Jamie Cunliffe also professed that he had ‘really wanted to help’ his 27-year-old sister and that he was ‘gutted’.

Before she took her own life, Ms Stevens posted a number of motivational posts on her Facebook page.

One image she shared read: ‘A lot of walking away will do your life good. Walk away from arguments that lead you to anger and nowhere.

‘The more you walk away from things that poison your soul, the healthier your life will be.’

Another post she shared said: ‘To the givers, forgivers, & selfless lovers out there… keep being beautiful, don’t let this cold world change you, and take advantage of every little moment you are given.’

Police were called to the property in Arthur Street, Little Lever, shortly before 3.50pm on January 21, 2019. 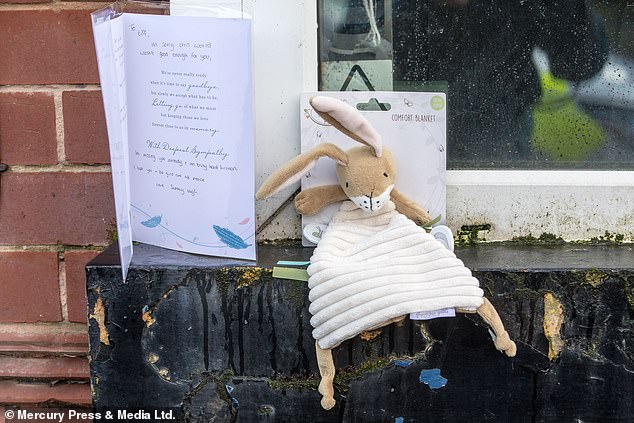 One woman arrived at the family’s home with a bouquet of flowers, a card and a soft toy rabbit after their deaths 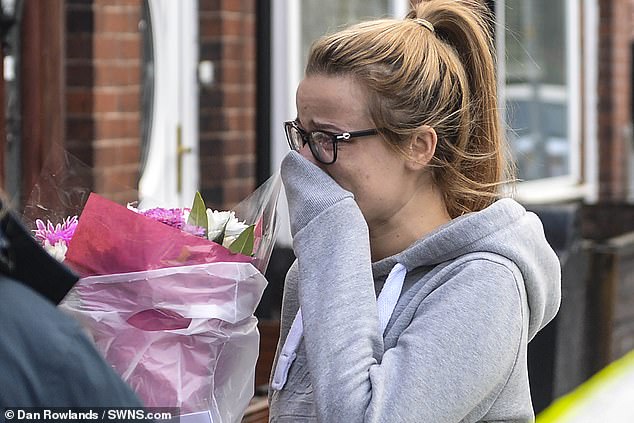 Neighbour Annmarie Crossland, 36, said she was first alerted when relatives were heard ‘screaming and shouting’ in the alleyway at the back of the house.

She described Ms Stevens as a ‘brilliant mum’ and said her own four children played with Ms Stevens’s daughters.

‘She would take them to the park and into Bolton. They were very friendly.’

Jamie Cunliffe, 29, whose sister Ms Stevens, 27, was found dead alongside the bodies of her little girls posted a tribute to the ‘three angels’ on Facebook.

Mr Cunliffe also thanked relatives and friends for ‘message after message’ of support and urged them to ‘send all your prayers to Tiffany and the girls’.

A day after their deaths, one woman arrived at the home with a bouquet of flowers, a card and a soft toy rabbit.

She was crying on arrival and had to be consoled by another woman.

Her card read: ‘To Tiff. I’m sorry this world wasn’t good enough for you. Missing you already and I’m truly heartbroken. You and the girls are at peace. Love Sammy Leigh.’

Ms Leigh said: ‘Tiffany was a very bright bubbly girl, she was very unique in her only little ways and has such a loving character.

‘She would do anything to help anyone, whenever we were out shopping she would take the time to sit at the side of homeless people to get to know them. 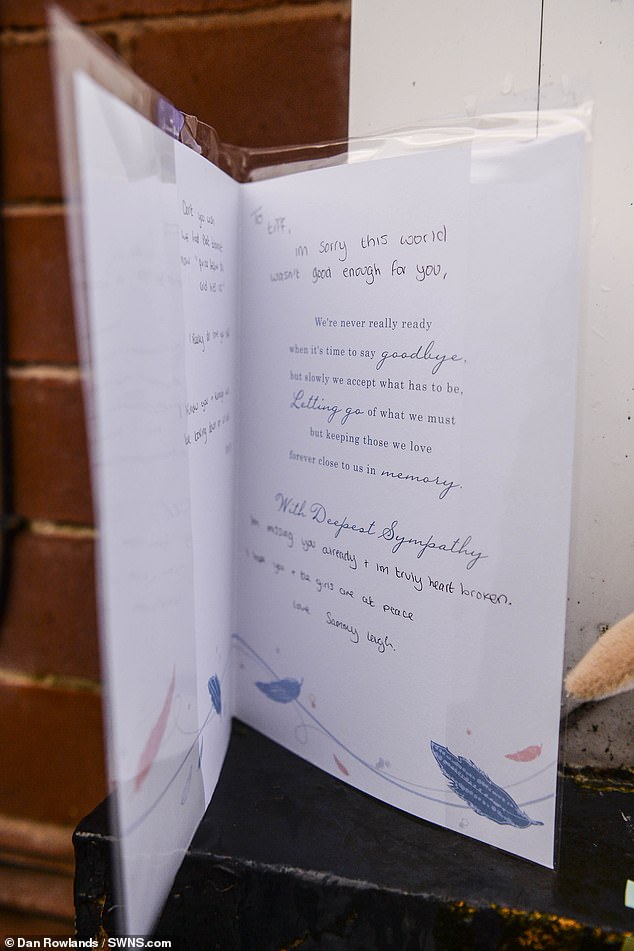 The card from friend Sammy Leigh read: ‘I’m sorry this world wasn’t good enough for you’

Friends paid tribute to the family on Facebook, praising Miss Stevens as a ‘lovely woman’

‘Honestly, she really was one of a kind. I just can’t believe she’s gone.’

Close friend Jade McCarthy added: ‘It was such a shock to so many people, everyone’s hearts ache this morning.’

Another neighbour, Marilyn Grundy, 69, said: ‘About 3.40pm I heard this man shouting. We often hear that going on.

‘My son said there’s a man running up and down the back street shouting. He was saying something about he can’t breathe. What have you done to me? I can’t breathe.

‘I thought he might have been stabbed or something.

‘We came out to have a look and the next thing rapid response are round the corner. 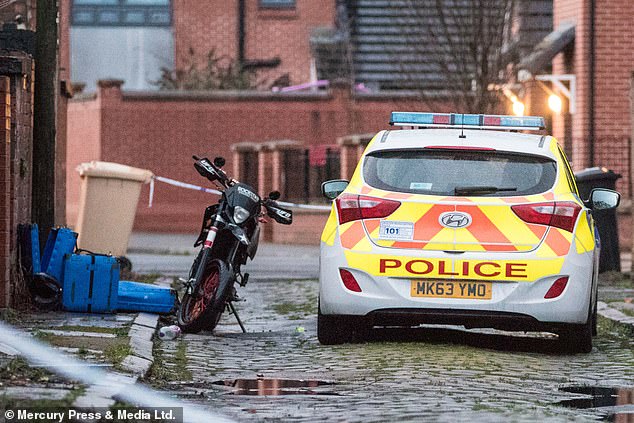 ‘It sounds like he found them. I’d never seen him before. It could have been a boyfriend, friend or relative. I don’t know. It’s so very sad.

‘I would see her crossing the road with her two children. She often looked like a person with the weight of the world on her shoulders.’

A friend of the family, Margaret Knox, 62, who has known Miss Stevens since she was a baby said the family is devastated to hear about the death.

Ms Knox said: ‘I have treated Tiffany like my own daughter throughout her life and for this to happen has shaken us. 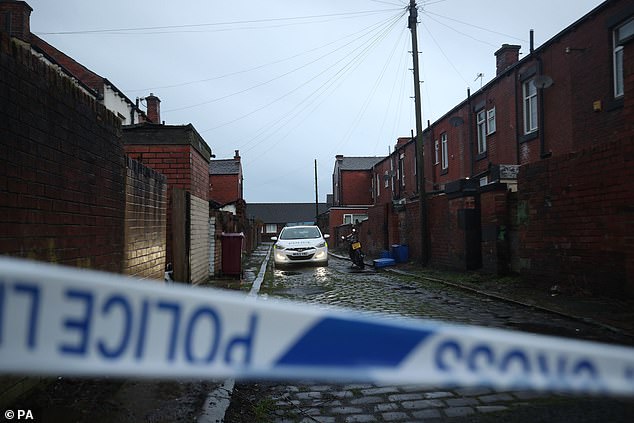 Police at the house in Little Lever, Bolton, where they were investigating the three deaths

‘We loved them very much and we’re all hurt, I have not slept since I found out what had happened. We had Christmas with Tiffany and the girls.

‘There’s no way we could’ve seen this coming. No one knows what has happened but we are waiting to hear more from the police.’

She added: ‘Her mother is my best friend and she’s coming from Manchester so hopefully we will know more by the time she arrives.’

‘We was only talking the other day babes and now you and your beautiful girls are sleeping with the angel. 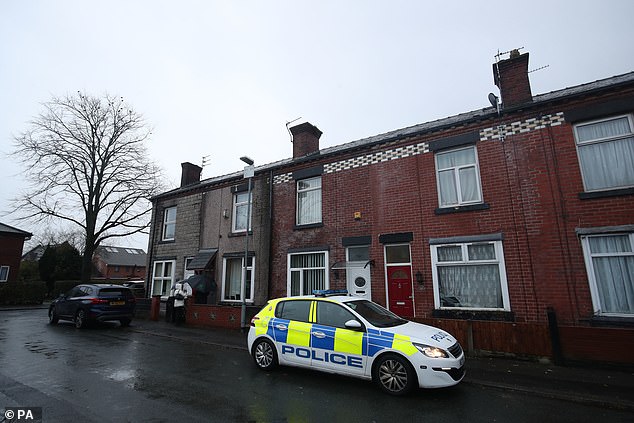 ‘How can life be so cruel? You was such a lovely woman friend and mum. Such a shame. Seen the video with you and baby girls other day. You looked so happy.

‘I wish we could turn back time. You just needed a bit of extra help. You was doing so well. So sad, I will never forget you, Tiff. Rest in peace, beautiful.’

Chantal Norris added: ‘No, I can’t believe it. Rest in peace to you and them babies. What beautiful babies they was. I’m in shock.’

Witnesses at a two-day inquest beginning on January 6 next year will include family members and social services. 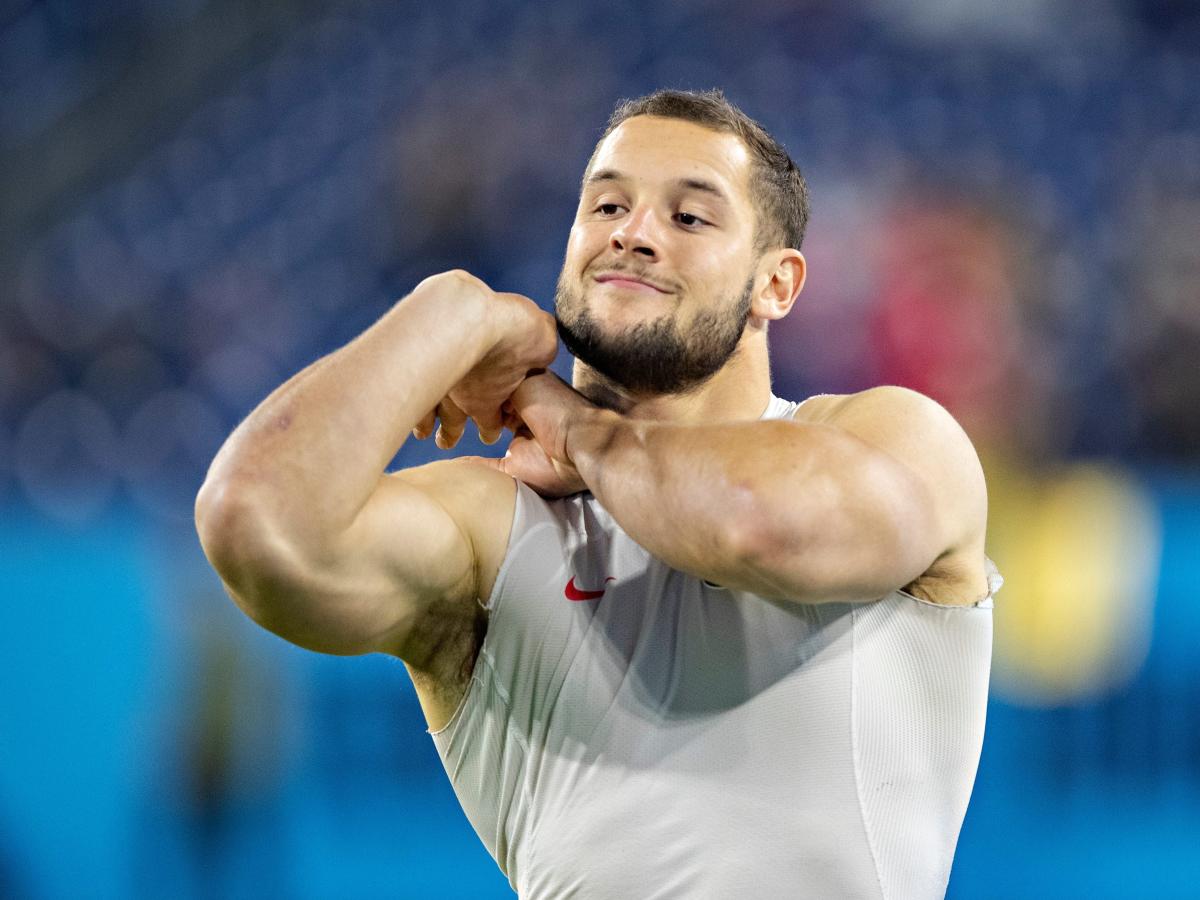