Mother, 32, branded ‘worst mum ever’ avoids jail for assaulting her own daughters


A mother of three branded ‘the worst mum ever’ is to be electronically tagged over Christmas after she hit her young daughters during a family holiday to Cornwall.

Hayley Wejs, 32, slammed one of her children aged ten against a car window and punched the other aged 13 in the face after the girls complained of not being allowed to go swimming with their friends.

The two girls reported the attacks to their father who is estranged from their mother on their return from the trip to St Ives, with police and social services officials then contacting Wejs.

When confronted she told one social worker: ‘I do sometimes give the kids a clip around the ear. The last time to happened was when they were playing up and I got frustrated. I know I’m not supposed to – but the children are very challenging.’ 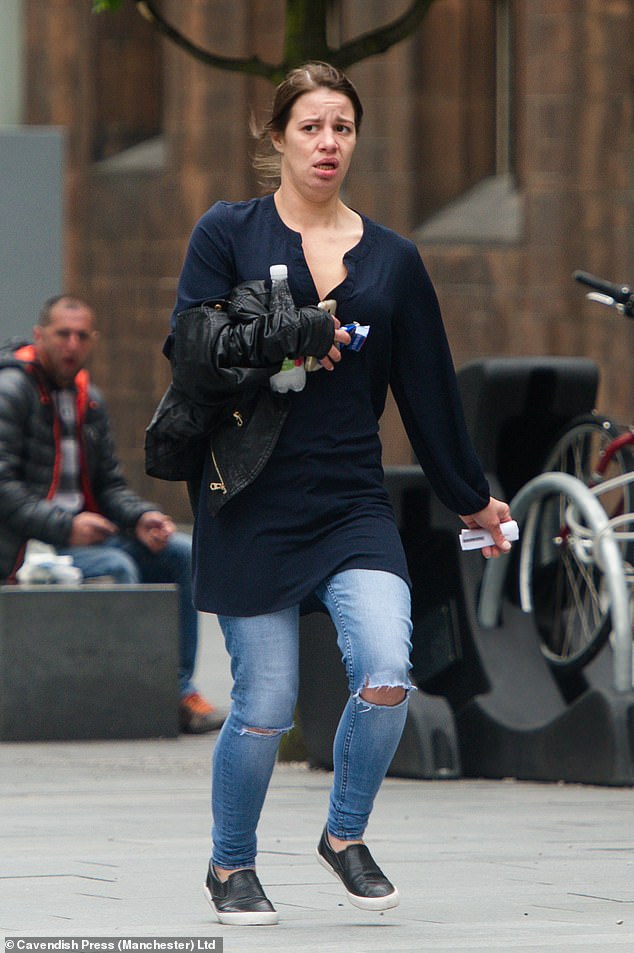 Hayley Wejs, 32, slammed one of her children aged ten against a car window and punched the other aged 13 in the face after the girls complained of not being allowed to go swimming

One of the girls told her: ‘You’re the worst mum ever!’ during one of the assaults.

At Minshull Street Crown Court, Manchester, Wejs, from Crewe, Cheshire who admitted assault was ordered to wear the tag for three months as part of a 9pm to 7am curfew.

She was also sentenced to three months jail suspended a for a year and ordered to complete 12 rehabilitation requirement days to help her address her temper tantrums.

The attacks occurred in August last year after Wejs and her new boyfriend took the two girls and their older brother on a ten day family break at St Ives Holiday Park. 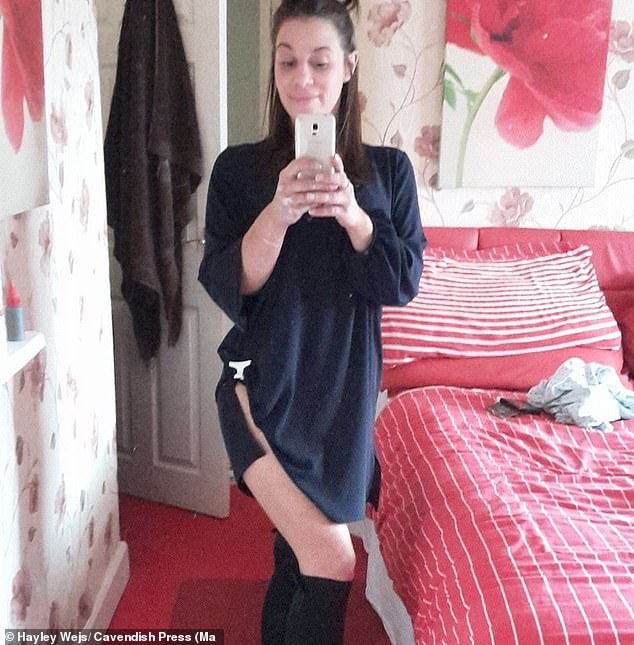 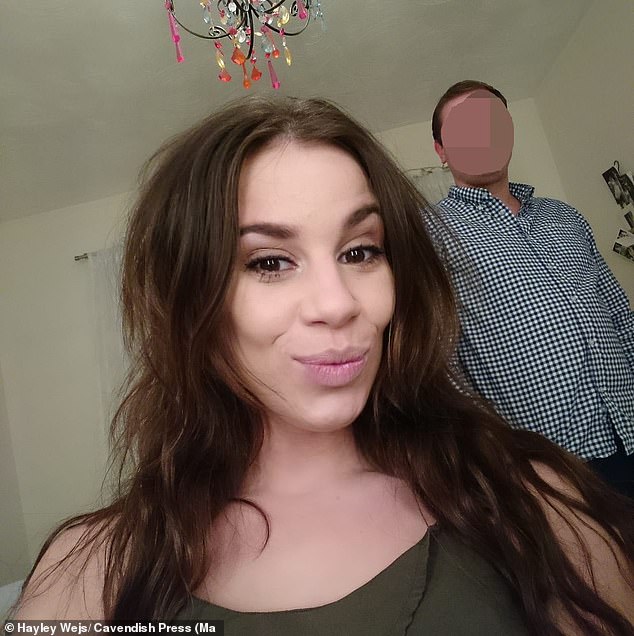 Wejs was on holiday with her boyfriend, her ten and 13 year old daughter and their older brother

Trouble began after the girls who live with their father in Wythenshawe, Manchester complained about a planned day-trip to the fishing village of Mousehole when they wanted to go swimming instead.

Geoff Whelan prosecuting said: ‘The older girl described an incident involving her mum which occurred in a KFC car park. She said she had been sat in the back of her mum’s boyfriend’s car with her sister and brother.

‘Her mum was sat in the front passenger seat. She said her sister was upset because her mum had stopped them going from going swimming to taken them somewhere else to take photos. 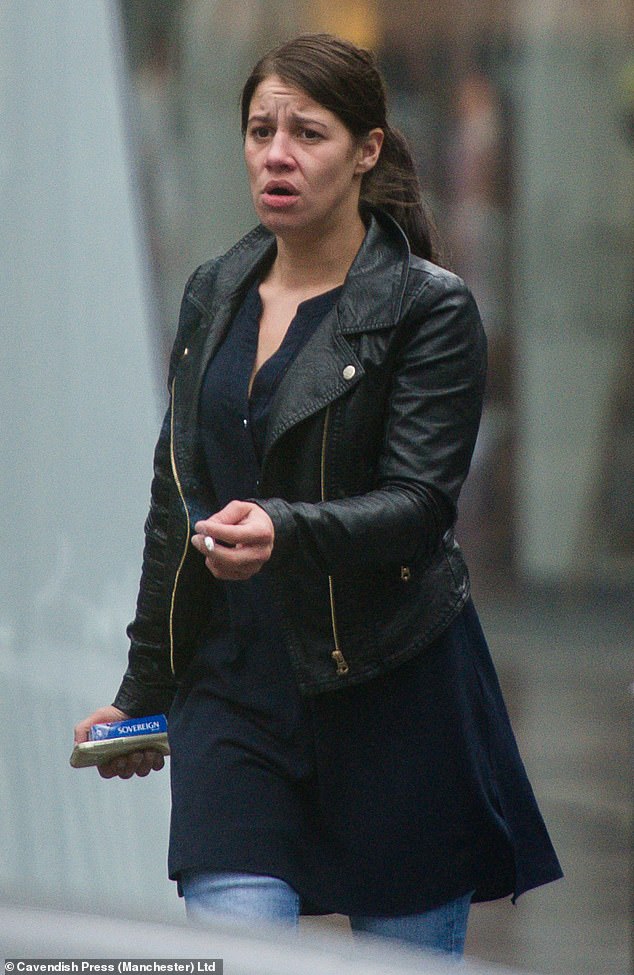 Wejs admitted assault was ordered to wear a tag for three months as part of a 9pm to 7am curfew. She was also handed a three-month jail suspended a for a year

‘The family got out of the car and the younger girl walked off crying and there was an argument between the older girl and her mum which resulted in the defendant grabbing her by the pony tail and dragging her back to the car.

‘Later that day the older girl said she was in the lounge area of the caravan when an argument broke out as she wanted to see some friends she made on holiday.

‘But her mum said ‘no’ then grabbed her in headlock slapped her and bit her cheek. The older girl said she hit her mum and pushed her but then her mum punched her in the nose.

‘The older girl went into the bedroom and felt dizzy and couldn’t breathe from her nose properly and she saw blood. She phoned her dad to tell her what happened.

‘The younger girl said her mum flipped out at her when they were in the car as they were about to pull into KFC. She said her mum slapped her and pulled her hair. 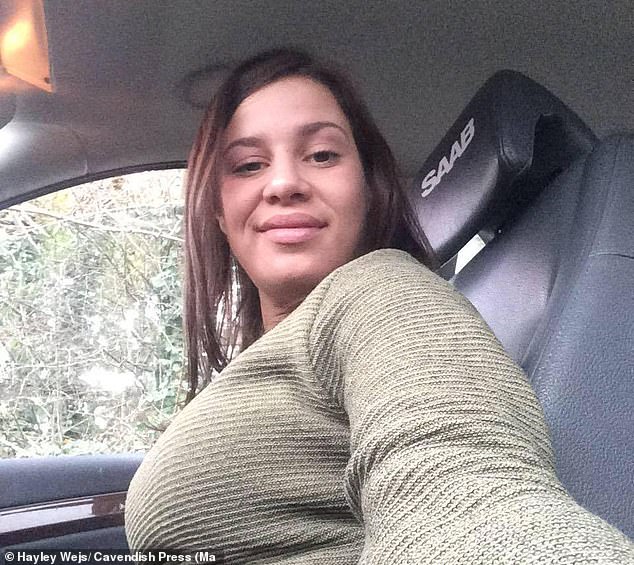 ‘She said her mum hurt her and told her mum she was ”the worst mum ever.” She said her older sister told their mum to get off her. She said she run to a bush before all were told to get back into the car by the mum’s boyfriend who said they were being embarrassing.’

‘Later back in the caravan. the younger girl said she heard an argument and saw her older sister run into the room and crying saying their mum had hit her.’

The older girl complained of pain to her nose and was seen to have a black eye when the children returned from the holiday. Wejs later told police they had panned to go to Mousehole but the daughters were upset as they wanted to go swimming with the friends.

Mr Whelan added: ‘She said the younger girl had been repeatedly swearing at her. She warned her but was sworn at again, She said she turned around to give her daughter a clip around the ear but said she made contact with her forearm.

‘They said they had their KFC then went onto Mousehole for walk around the beach and claimed everyone was getting on. She talked about her split with the children’s father and claimed he had poisoned the girls against her. 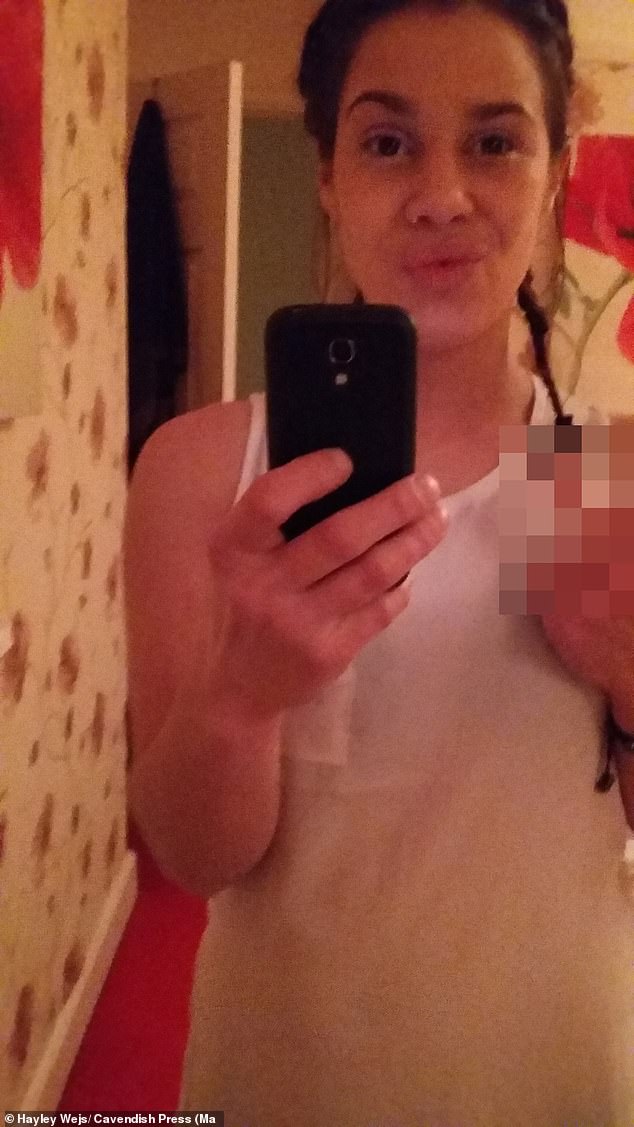 ‘She said she does chastise the children but says she never leaves marks and bruises. She said she used to send them to bed when they were naughty but nowadays she would take their phone from them or ban them from using the internet. Although the prosecution accept there was some degree of provocation from the daughters there was an abuse of trust.’

Wejs who lives on Universal Credit had previous convictions for battery and assault. The court she had since been in contact with the children under supervision. In mitigation she claimed she had been subject of chastisement from her mother when she was a child. The court heard there had been difficulties in her relationship with the children’s father.

Sentencing Judge John Potter told Wejs: ‘You lost your temper and behaved in a violent and unforgivable way towards to your two children. There is be a chequered background as regards your domestic arrangements but whatever the history is as regards your relationship with the children’s father, this provides no excuse whatsoever for the way you behaved towards vulnerable victims in your care.

‘These girls are not your equals. To simply say: ‘well I think sometimes my daughters deliberately wind me up’ or ‘they have had their mind poisoned by their father’ is, to put it bluntly, not the point. You must behave in a far more mature way than you did.

‘If you don’t, you will cause them more and more harm. It is wholly, wholly indefensible to abuse children – whatever you maybe feeling at the time.’

International observers see no fraud in 'historic' US vote

Pilot, 66, meant to have flown Emiliano Sala over Channel is being prosecuted over fatal flight

President of Azerbaijan: We can conduct any military operation on the territory of Armenia

Vanguard S&P 500 ETF price analysis: A correction or end of the rally?

A COVID-19 shortage has Grape Nuts fans missing the crunch of their favorite breakfast cereal. The...