Mother, 37, from New York nearly killed by her $60 NOSE PIERCING after it caused deadly infection 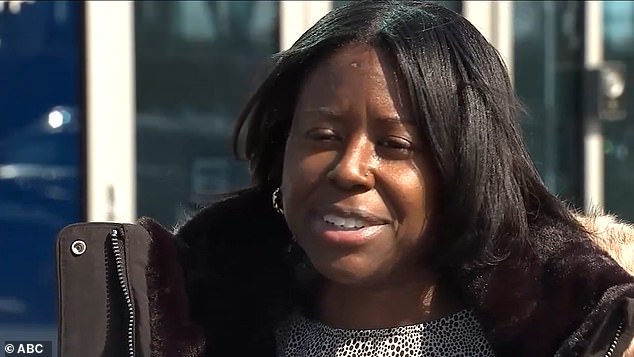 
Mother, 37, almost dies and needs a liver transplant after a Hepatitis B infection from a $60 NOSE RING left her unable to eat or even drink water

A mother-of-one  from New York was almost killed after a new nose piercing caused a deadly infection that destroyed her liver.

Dana Smith, 37, from Queens, spent $60 on the jewelry during a shopping trip over Thanksgiving last year, as a birthday treat to herself.

A few days later the manager at Northwell Health started to feel unwell but she put off going to the doctor believing the problem was down to stress caused by the holiday season and the pandemic.

But by January 12, Smith became unable to drink or eat and she finally went to Long Island Jewish Medical Center on January 12.

Doctors discovered that she was suffering from fulminant Hepatitis B, a rare infection that had caused her liver to fail – and she could be days from death.

Dana Smith, 37, a mother and insurance manager from Queens, New York, nearly died from Hepatitis B after her nose piercing became infected

Dana was rushed into hospital with Hepatitis B virus which destroyed her liver. She was put into a medically induced coma (pictured) to avoid seizures whilst surgeons put her on the transplant list

She later told ABC7 News: ‘I was just drinking water, I couldn’t hold the water down. I guess at some point I started to throw up blood.’

After being taken to North Shore University Hospital, in Manhasset, Dr Lewis Teperman, director of Northwell’s Transplant Services took over her care.

He decided to put Dana into a medically induced coma in order to reduce the risks of the infection swelling her brain or causing seizures.

It was then a race against time to put her on the transplant list for a new liver.

A match was found in just 48 hours and the surgery took place on January 17.

But it wasn’t until after her surgery that Dr Taperman noticed the small stud in her nose and realized that it could be the source of the infection.

Dana told New York Daily News: ‘I told him it was new, it’s not something I had for years. My health was good otherwise. I had just gone to doctor, everything was fine prior to me getting it. That was the only thing that made sense.’

Dr Teperman added: ‘This was the one unique change that had taken place in her life, this nose ring. And it’s the perfect time for the virus to incubate.’

The surgeon and patients were reunited later after her recovery, where she thanked him for saving her life

Speaking to ABC7News following her recovery she said: ‘That one decision [to go to the hospital] saved my life. It’s very overwhelming. Emotionally, everything, mentally.’

Doctors warned that the infection was made much more serious because Dana waited so long to seek medical attention.

Smith warned others not to avoid going to the hospital because of fears over COVID-19.

Dr Teperman said that the Hepatitis B virus is rare and causes only 5% of the country’s cases of liver failure each year.

He added that he cannot be sure that Dana contracted the deadly infection at the Valley Stream, Long Island mall salon where she got the piercing, or from improper care afterwards.

What is Hepatitis B and how can it be treated?

Hepatitis B (HBV) is a viral infection that can cause liver failure, according to the CDC.

It is spread when blood, semen, or other body fluids from a person infected with the virus enters the body of someone who is not infected.

This can happen through sexual contact; sharing needles, syringes, or other drug-injection equipment; or from mother to baby at birth.

People who have received a piercing or tattoo in an unclean environment are also at risk, as are individuals who have injected or inhaled illicit drugs.

Not all people newly infected with HBV have symptoms, but for those that do, symptoms can include fatigue, poor appetite, stomach pain, nausea, and jaundice. For many people, hepatitis B is a short-term illness.

For others, it can become a long-term, chronic infection that can lead to serious, even life-threatening health issues like cirrhosis or liver cancer.

The best way to prevent hepatitis B is to get vaccinated.