A heartbroken mother has demanded answers after her son died less than 12 hours after receiving the Pfizer vaccine.

Luke Garrett, 20, suffered a fatal seizure brought on by a sudden spike in his temperature at his Tarbolton, South Ayrshire, home in February, his mother Tricia Garrett, 49, said.

Mr Garrett had muscular dystrophy and had been shielding for around a year so was ‘excited’ when his turn to get a vaccine meant he could finally ‘live his life’.

But he died in the early hours of the morning the day after getting the jab, leaving his family ‘devastated’ and desperate for answers.

The Medicines and Healthcare products Regulatory Agency (MHRA) are investigating Mr Garrett’s death – but there is no evidence of the jab causing seizures.

Muscular Dystrophy UK – a charity supporting people with the condition – said there is no link between those with muscle-wasting conditions and vaccine side-effects.

Mrs Garrett, 49, described ‘foam coming out of his mouth’ during his seizure – and told how she gave her dying son CPR as they waited for paramedics to arrive. 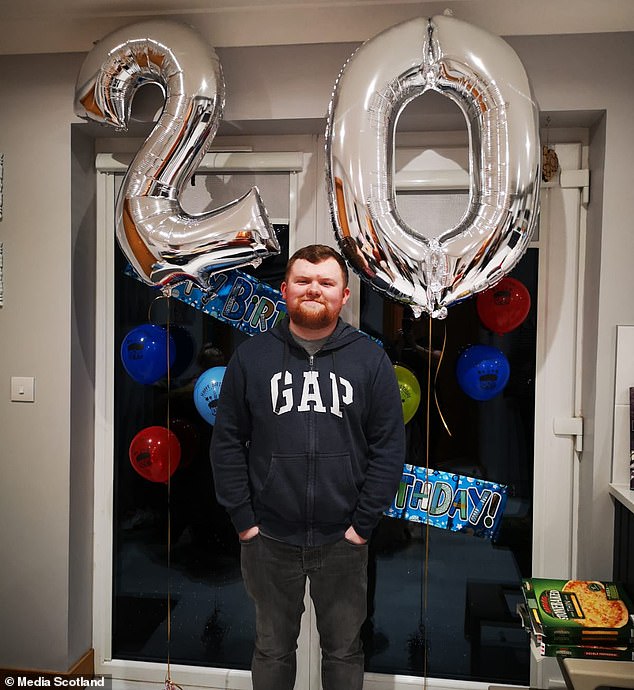 Tricia Garrett, 49, has demanded answers after her son Luke Garrett, 20, (pictured) died less than 12 hours after receiving the Pfizer vaccine

Mother-of-two Mrs Garrett said: ‘I didn’t want him to get it. Luke had been shielding for about a year.

‘He used to have support workers who came in three times a week, he also had high-functioning autism and needed support for that but he cancelled it all because he was that scared of Covid.

‘He was excited about going to get his Covid jab and being able to get back out into the world and live his life.

‘It wasn’t even 12 hours after his Covid jab that he died.

‘His whole body was in horrendous pain, he had a really high temperature; normally with his condition, his legs can end up in pain but this was different.

‘Before he died, the arm he got the injection in was really painful.

‘He then suffered a seizure, which has never happened before.

‘He started to fit and there was foam coming out of his mouth.’ 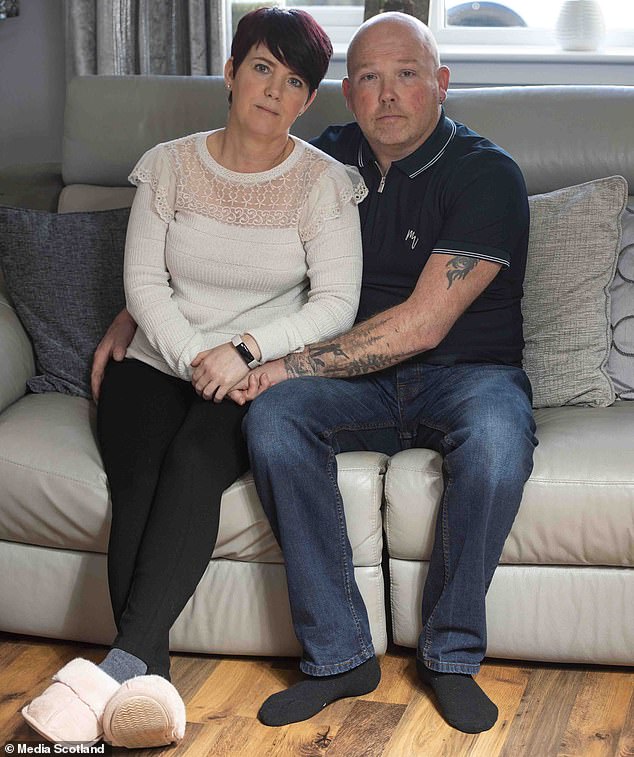 Mrs Garrett, 49, (pictured with her husband Shaun Garrett, 49) believes her son would still be alive if he didn’t get the Covid jab that day

‘I phoned 111 about 1am and told them somebody needs to come out. I thought he needed a muscle relaxant to help with the terrible pain.

‘A nurse told me they would send someone out within two hours, she was really detailed with everything, she asked about temperature and muscle pain.

‘They promised they would call back within the two hours, but no one called.

‘Instead, I received a call at 4am to ask if Luke still needed help. I just told them, “my son is dead”.’

Mr Garrett was given the vaccine at Ballochmyle Medical Practice shortly after 3pm on February 8.

By midnight he was unwell. Paramedics rushed to help Mr Garrett, but nothing could be done to save him. He died around 2.30am.

He was just ten days away from celebrating his 21st birthday.

Mrs Garrett – who lives with her husband Shaun, 49, and 18-year-old daughter Anna – told how she gave her son CPR while they waited for paramedics to arrive.

She added: ‘I was giving him CPR on his chest whilst on the phone to 999.

‘The paramedics didn’t have a clue what had caused it, they just tried to give him adrenaline but there was nothing more they could do.’

The MHRA are investigating Mr Garret’s death – as they do with all ‘serious suspected adverse drug reactions’, a statement said.

Mrs Garrett added: ‘Our son was fit and well, doctors used to say he was one of the better patients they had seen. 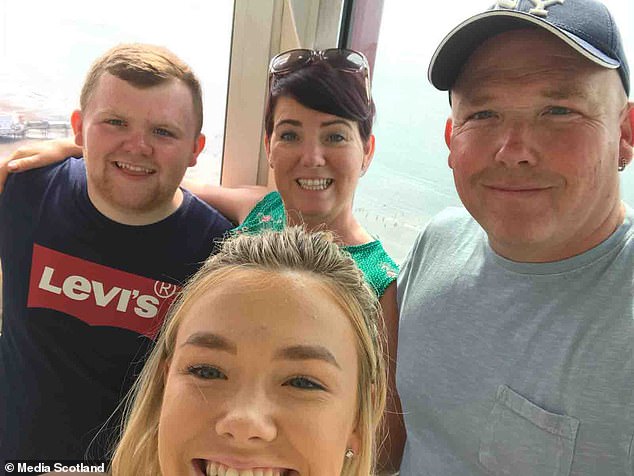 Mrs Garrett – who lives with her husband Shaun, 49, and 18-year-old daughter Anna (pictured together) – told how she gave her son CPR while they waited for paramedics to arrive

‘He would visit a clinic yearly and would have heart checks every six months because muscular dystrophy can affect your heart.

‘He was on heart drugs that were just as a preventative measure.

‘The post-mortem showed his heart was in a perfect condition. He had never had a seizure before.’

A spokesperson for MHRA said: ‘We are saddened to hear of this loss, and our thoughts are with the family.

‘As with any serious suspected ADR, reports with a fatal outcome are fully evaluated by the MHRA, including an assessment of post-mortem details if available, to consider whether the vaccine may have caused the event, or whether the event and fatal outcome were likely to be purely coincidental and due to underlying illness.

‘The MHRA also continuously monitors the nature of adverse events reported with the Covid-19 vaccines including reports of seizures and convulsions.

‘The current evidence does not indicate an association between the Covid-19 vaccines and onset of seizure events in people with or without a prior history of seizure.’ 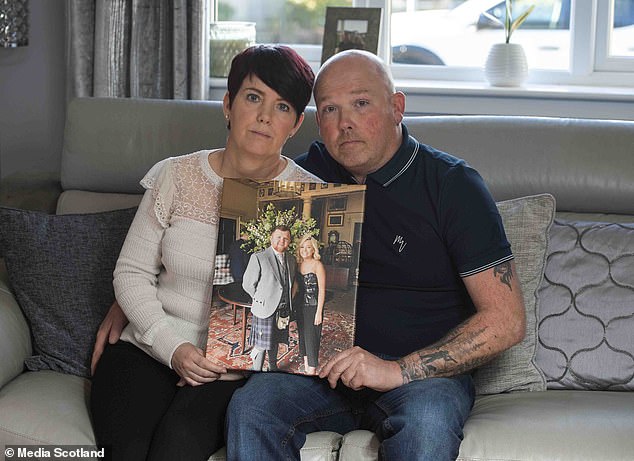 Mr Garrett (his mother and father, pictured) had muscular dystrophy and had been shielding for around a year so was ‘excited’ when his turn to get a vaccine meant he could finally ‘live his life’

Dr Joy Tomlinson, joint director of public health at NHS Ayrshire and Arran, said: ‘Our condolences and thoughts are with Luke Garrett’s family.

‘Local GP practices have been supporting the delivery of vaccinations to the over 80s, those shielding and housebound patients living in the community.

‘We continue to urge those offered a vaccination to take up their appointment. The benefits of the Covid-19 vaccines outweigh the risks and it continues to be a safe and effective vaccine.

‘The vaccination programme is one of three key ways we are working to beat this virus, along with both symptomatic and asymptomatic testing, and the stay local guidance everyone in Scotland must follow.’

The Scottish Government has said there is no ‘causal link’ between the Pfizer vaccine and any deaths.

A Scottish Government spokesperson said: ‘Our thoughts and condolences are with Luke’s family, and all those who have lost a loved one during this dreadful pandemic – what they are going through is unimaginable.

‘The vaccines are safe and approved by regulators – including the MHRA – and we encourage all those who are offered to get vaccinated.

‘No causal link has been made between the Pfizer vaccine and any fatality in the UK. The MHRA is alerted of all deaths where a patient was recently vaccinated and they will draw their own conclusions.

‘It would be inappropriate to comment further on any individual case.’

‘We closely monitor all such events and collect relevant information to share with global regulatory authorities, including the Medicines and Healthcare products Regulatory Agency (MHRA) in the UK.

‘To date, millions of people have been vaccinated with our vaccine.

‘It is important to note that serious adverse events can occur in the population that may be unrelated to the vaccine.

‘Our immediate thoughts are with the bereaved family.’

Muscular Dystrophy UK say they have been supporting Mr Garrett’s family through their ordeal.

A spokeswoman said: ‘We provide support and guidance to individuals and families living with muscle-wasting conditions, and we are always here for those who have experienced a bereavement.

‘We have been working closely with Luke Garrett’s family to support them at this difficult time and immediately circulated details with relevant medical professionals and authorities.

‘The MHRA has confirmed to us that their analysis of data relating to people who have received a Covid-19 vaccine has not shown any linkage between having a muscle-wasting condition and experiencing vaccine side-effects.

‘Throughout the Covid-19 pandemic, we have shared guidance for people affected by muscle-wasting conditions on our website.

‘We are not clinically trained ourselves so rely on collaborations with leading neuromuscular clinical and healthcare professionals to help us to provide the information and advice to do this.

‘Our helpline provides guidance for anyone with a muscle-wasting condition.’

Medical director of NHS24 – Scotland’s NHS telephone service – Dr Laura Ryan said: ‘NHS24 is very sorry to hear of Luke’s death and our sympathies are with his family at this difficult time.

‘If Luke’s family make direct contact with us we will take the matter forward with them.’

Spinning tot! Adorable moment giggling toddler tries to copy his dog as she chases her tail