Mother left looking like the ‘Elephant Man’ after having AstraZenenca jab


A mother says she was left looking like the ‘Elephant Man’ after claiming she suffered an allergic reaction to the AstraZeneca vaccine.

Despite her experience, however, Vicky Richardson, from Fareham, Hampshire, is reassuring Britons to ‘trust the science’ and continue to get the jabs after making a full recovery.

The 37-year-old first noticed something was different when she felt out of sorts and as if she was suffering from a hangover after having the first dose last month.

But when Vicky woke up the following morning she felt her eyelashes brush her puffed up cheeks and was stunned when she looked in the mirror and saw just how swollen her face was. 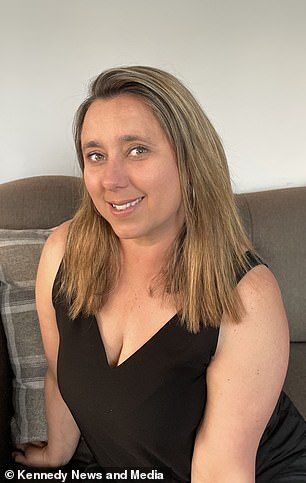 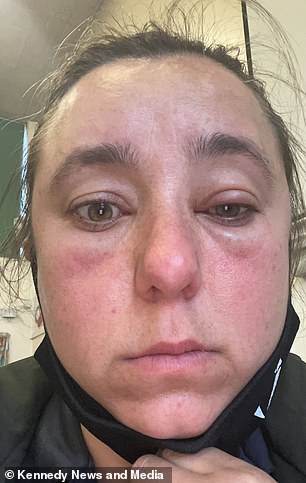 The after school club manager went to work as usual and rang 111 for advice, where a concerned operator wanted to dispatch an ambulance to blue-light her to hospital.

Vicky declined the ambulance and instead rang her mum who rushed her to A&E where she was told she was suffering an allergic reaction and was given medication to calm the swelling down.

Images show Vicky almost unrecognisable with her face swollen and red with one eye so inflamed that her eyelid is partially closed, while others show how welts appeared on her cheeks later on.

After taking steroids for three days Vicky’s face returned to normal and she was able to go back to work.

Now she is sharing her story in a bid to reassure concerned Britons and urge them to ‘trust the science and NHS’ and get their vaccine.

UK drug regulators the MHRA said that ‘no effective medicine or vaccine is without risk’ and that everyone ‘should get their vaccination when asked to do so unless specifically advised otherwise’.

Vicky, from Fareham, Hampshire, said: ‘Other friends who had the jab done said their arms were aching but I felt absolutely fine until later on.

‘I worked that day as normal and had a really bad headache, which I thought was because I’d stuck my hair up for too long.

‘I felt a bit hot and cold and just felt a bit rubbish, like I was hungover.

‘When I woke up in the morning my eyelashes were touching my cheeks, that’s how I could feel how swollen I was.

‘When I washed my face I thought ‘oh no’ as it was really puffy, I looked like The Elephant Man.’

Vicky had her vaccine at 8.30am on March 24 and went to work as normal, it was only towards the end of the day that she started to feel a little off colour. 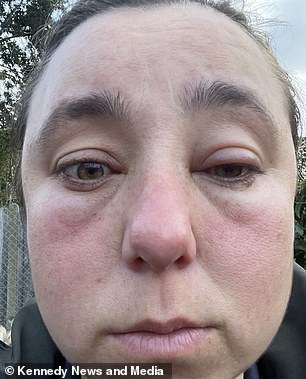 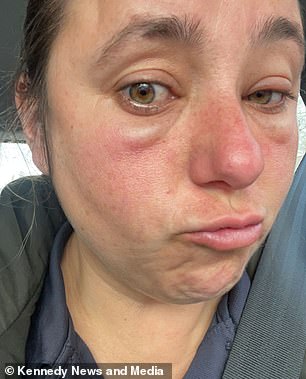 Images show Vicky almost unrecognisable with her face swollen and red with one eye so inflamed that her eyelid is partially closed (left), while others show how welts appeared on her cheeks later on (right)

It was only when she woke at 6.45am the following day that Vicky realised she’d had a reaction and when she arrived at work she called 111 for advice.

Vicky has had an allergic reaction before when her eyes swelled up three years ago from an unidentified source.

She said: ‘I went to work and phoned 111, they wanted to send an ambulance but I said I’d get to the hospital myself.

‘I got my mum to pick me up and we went over to QA (Queen Alexandra) hospital in Portsmouth and went to the appointment booked by 111 so I didn’t have to wait.

‘They said they would usually take a blood test to see if there’s histamine in my body but that clearly I’d had an allergic reaction so they would give me medicine straight away.

‘I had eight lots of steroids for three days every morning, after my first dosage of tablets I felt it had gone down and felt fully better four days after.

‘I took the Friday off work because the children wouldn’t have liked to look at me like that.

‘I have had one allergic reaction before where my eyes swelled up but to be honest it didn’t cross my mind.

‘I have no idea what I had an allergic reaction to three years ago.

‘At the time I’d been near my friend’s cat and I thought maybe it was that but it was never diagnosed as anything specific.’ 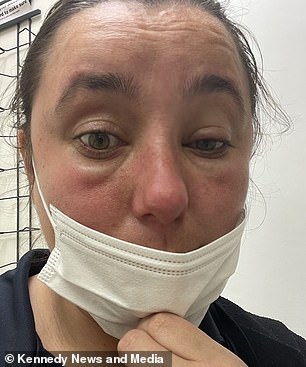 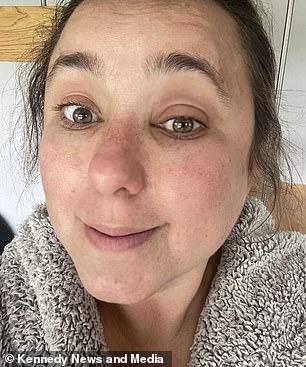 Despite her experience, however, Vicky, from Fareham, Hampshire, is reassuring Britons to ‘trust the science’ and continue to get the jabs after making a full recovery

Now fully recovered, Vicky is sharing her story to reassure anyone concerned about the vaccine that although she believes she had an allergic reaction to it – she’s fine now.

Vicky said: ‘I don’t want to scare people but I want people to know that it can happen, but I’m fine now.

‘I think you’ve just got to trust the science and the NHS that they know what they’re doing and we have to stick by it.

‘I’m hopeful I can have the second jab in June.’

An Oxford University spokesperson said: ‘People can have allergic reactions to any medicine or vaccine, and serious reactions usually occur within minutes of the dose.

‘Anyone with concerns about allergy should seek medical advice.’

An AstraZeneca spokesman said they couldn’t comment on individual cases but that ‘patient safety is our number one priority and patient information and product leaflets are produced to inform both the HCP [healthcare professional] and patient and approved by the regulators’.

An Medicines and Healthcare products Regulatory Agency (MHRA) spokesman said: ‘The MHRA closely monitors reports of allergic reactions and people are advised not [to] have the vaccine if they have ever experienced hypersensitivity to any of the active substances or any of the other ingredients.

‘We encourage anyone who experiences a suspected side effect to report it via the Coronavirus Yellow Card scheme to help our assessment of these cases.

‘Over 37 million doses of vaccines against COVID-19 have now been administered in the UK, saving thousands of lives through the biggest vaccination programme that has ever taken place in the UK.

‘No effective medicine or vaccine is without risk. We continually monitor safety during widespread use of any vaccine.

‘This is to ensure vaccines are performing as expected, to identify any new side effects that may arise, and to ensure the benefits continue to outweigh the risks.

‘Everyone should get their vaccination when asked to do so unless specifically advised otherwise.’