‘I don’t want to live’: Mother of four tells of anguish after she was pinned down and raped by two Russian soldiers during 12 hours of brutality

By Andy Jehring For The Daily Mail

A Ukrainian mother of four said she wanted to die after being raped for more than 12 hours by Russian soldiers.

Elena – not her real name – was attacked on April 3 after a Russian sympathiser in the southern Kherson region told the troops her husband was a Ukrainian soldier on the front line.

Describing the assault, Elena, a midwife, said she was in a shop at 3pm when the soldiers came in and began talking to customers.

One pointed at her and said, ‘She’s a banderovka!’ – a term referring to Ukrainian wartime nationalist leader Stepan Bandera, who collaborated with the Nazis to fight Russia. 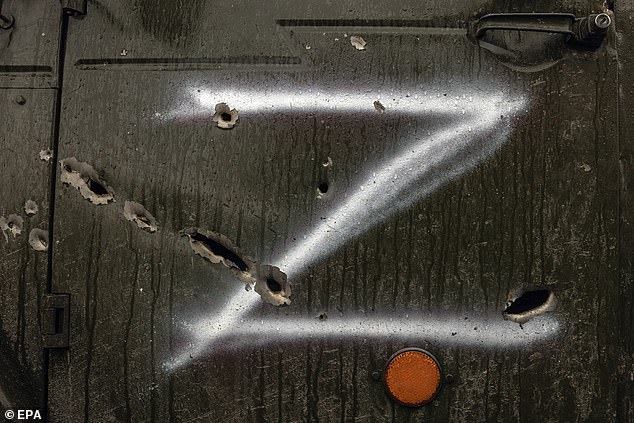 Above: Russian forces daubed the letter Z on their military equipment in order to identify it from enemy vehicles. Elena – not her real name – was attacked on April 3 after a Russian sympathiser in the southern Kherson region told the troops her husband was a Ukrainian soldier on the front line 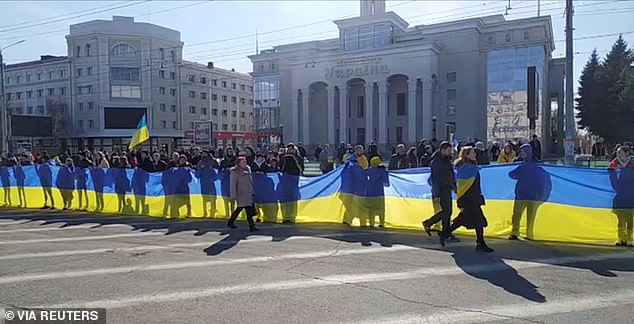 Citizens of Kherson hold a yellow and blue banner of Ukraine and protest Russia’s occupation of their town. La Strada, a women’s rights group, believes many more rape victims will come forward

Elena said: ‘I quickly left the shop. I just had time to get into my house. Two Russian soldiers came in through the door after me.

‘Without a word, they pushed me on to the bed. They held me down with a rifle and stripped me. They didn’t say much. Sometimes they called me ‘banderovka’ or they said ‘your turn’ to each other. Then, at 4am, they left.’

Sobbing, she said it left her feeling ‘very disgusting’, adding: ‘I don’t want to live.’ She also vowed to find those who betrayed her, warning: ‘I will point the finger at the people who singled me out. I will point them out to my husband.’

Alina Kryvoulyak, of La Strada, a women’s rights group, said: ‘There could be thousands of women and young girls who have been raped.’

La Strada has received calls on its helpline about seven cases of rape and Ms Kryvoulyak believes many more will come forward once the initial shock wears off.

The first call La Strada received on March 4 was about a ‘collective rape of a mother and her 17-year-old daughter by three men’ in Kherson.

The other cases were in the Kyiv region, she said.

‘Russian soldiers have committed sexual violence against Ukrainian women and men, against children and against the elderly,’ Ukraine’s prosecutor general Iryna Venediktova said this week.

She recognised, however, the challenges of gathering evidence in a country at war where phone signals and electricity coverage are patchy at best.

NBA: If the Nets have to squeeze Durant and Irving to win…

Autumn on the Porch – Decorating Reviews 2022

Autumn on the Porch - Decorating Reviews 2022