An overweight woman who lost more than 100lbs after years of being bullied for her size says she is now being trolled by people who tell her she is ‘too skinny’.

Stay at home mom and Red Cross volunteer Kara Henderson, 34, from Temecula, California, suffered from asthma as a child, which stopped her from getting involved in sport – and saw her pile on weight.

As a result, Kara says she was mercilessly tormented by her peers, and would end up crying herself to sleep most nights.

Her lifelong struggle with her size reached rock-bottom in 2014, when Kara began struggling with depression after moving to North Carolina with her Marine husband Jason.

Jason often had to be away for work and Kara was increasingly left alone; to cope with her feelings, she comfort ate fast food and takeout, and by 2017, she tipped the scales at 251lbs, and struggled to fit into size 16 clothing. 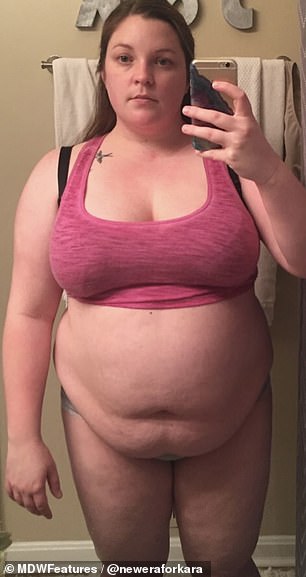 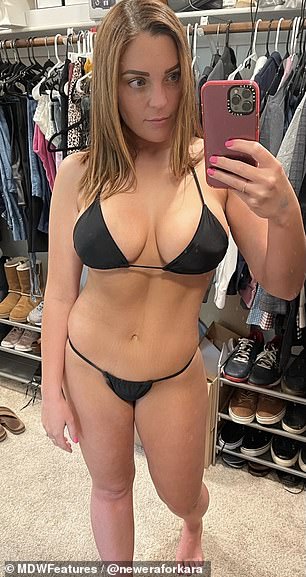 Then and now: Mother-of-one Kara Henderson, 34, has revealed how she shed more than 100lbs after undergoing weight loss surgery in 2017 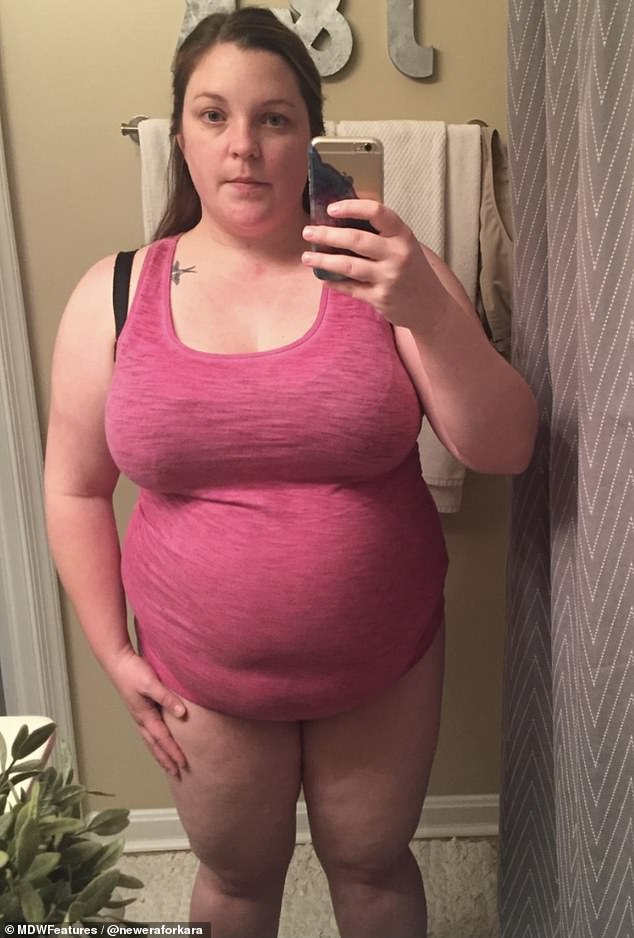 Battle: Kara, who lives in North Carolina, began struggling with her weight as a child; she had asthma, which prevented her from getting involved in sport, and saw her pile on the pounds 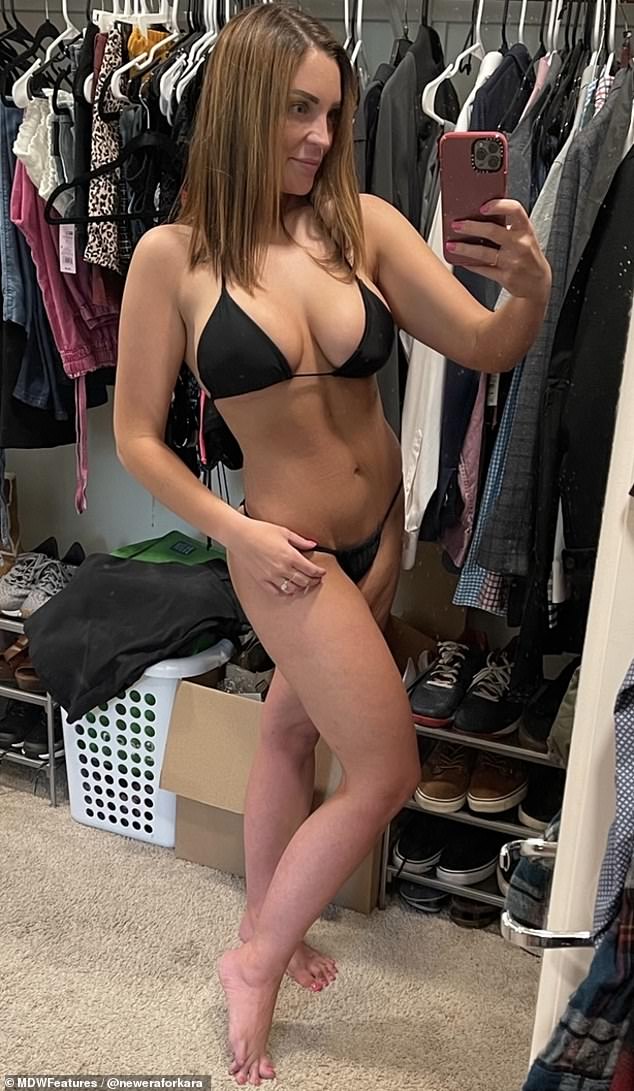 Transformed: Her weight struggles reached rock bottom in 2017, when she tipped the scales at more than 250lbs, after turning to food for comfort amid a battle with depression

That same year, Kara decided that she could not longer allow herself to be miserable because of her weight and looked into the option of weight loss surgery.

In July 2017, Kara underwent vertical sleeve surgery, a procedure that removes 80 per cent of a patient’s stomach in order to reduce their ability to feel hungry, or eat large quantities of food.

In the 16 months that followed, Kara lost 108lbs and weighed just 143lbs. Having her second child, Ivy, now 18 months old, in 2019, Kara inevitably regained some of the weight she had lost, but has since lost this excess weight once more and now fits into a size two.

Kara’s weight loss has changed her life completely. Previously unable to play with her kids or walk up a flight of stairs without feeling exhausted, Kara believes her surgery has made her a better mother, wife and friend as she now has so much more energy. She now loves to hike, cycle and is even learning to play golf.

Kara’s friends and family have noticed this change too, and say that she not only looks incredible, but that she is so much more confident since her operation.

However, Kara has also had comments from strangers on her Instagram who have said that her weight loss has now made her ‘too skinny’ – she laughs these comments off.

Taking action: In 2017, Kara realized that enough was enough and she decided to undergo weight loss surgery in the hopes of improving her health 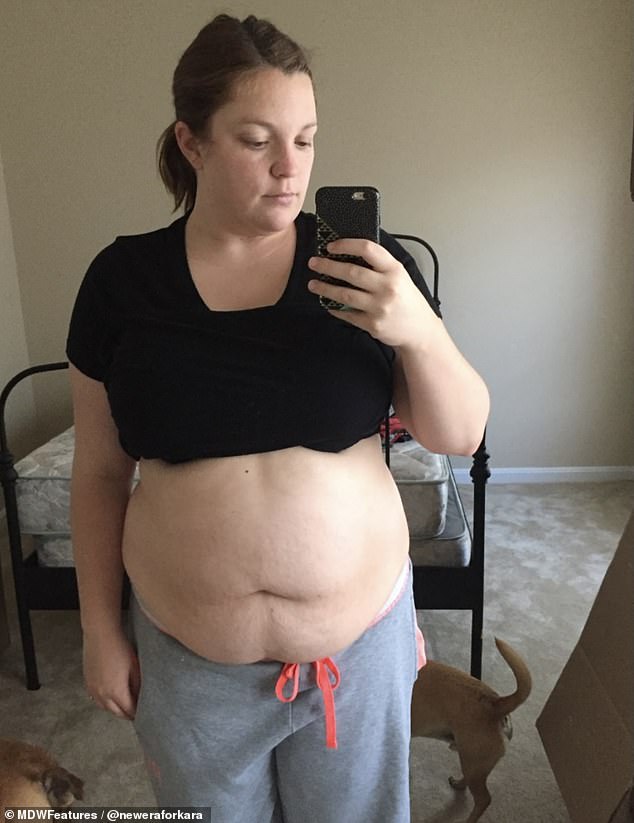 Before: ‘I struggled with depression and I ate to comfort myself and I put on weight rapidly at that point,’ Kara said of her size before her weight loss surgery 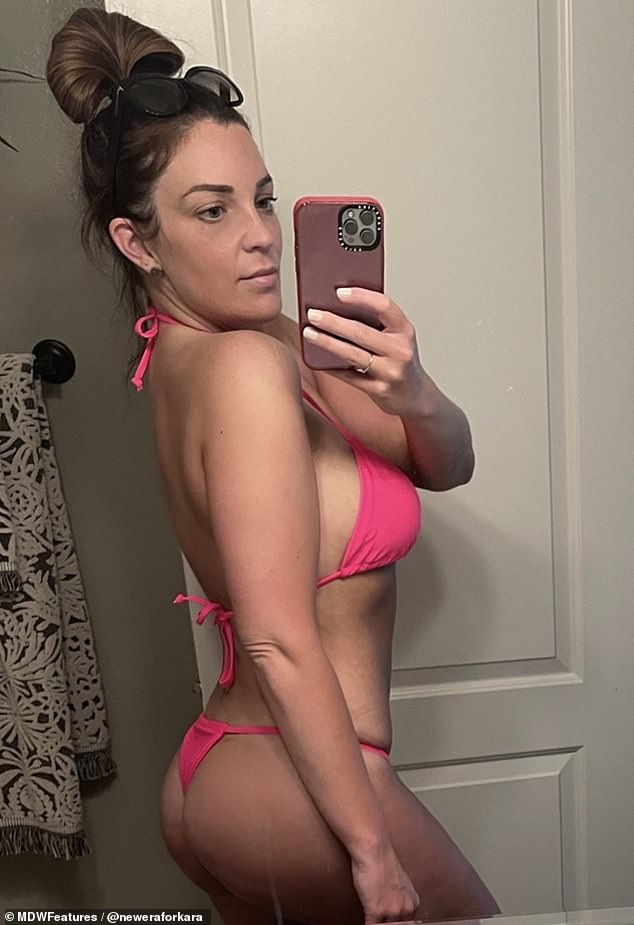 A new woman! After undergoing a gastric sleeve, during which 80 per cent of her stomach was removed, Kara began dropping weight quickly, losing more than 100lbs in 16 months

According to the 34-year-old, one of the hardest parts of her journey post-surgery, was realizing that she could no longer eat large portions. Being so used to stuffing takeaways, Kara felt as though she was grieving. Fortunately, over time these feelings have passed and Kara has learned to cook healthy meals from scratch at home.

‘I have been heavier since I was a child,’ Kara said.

‘I had asthma when I was younger and it made getting involved in sports and exercise difficult.

‘I have struggled with self-confidence since I was very young and had very low self-esteem and I thought I was lazy and that I would always be fat.

‘Kids teased me for being fat through middle school and high school. I’m someone who doesn’t like confrontation, so I would pretend it didn’t bother me, but then cry myself to sleep most nights.

‘I was constantly told that I had such a pretty face but I would be prettier if I lost some weight.

‘When my husband and I got married, he was in the Marine Corps and we moved from California to North Carolina.

‘He was gone a lot for work and I was alone and away from family and friends for the first time in my life.

‘I struggled with depression and I ate to comfort myself and I put on weight rapidly at that point.

‘I decided in 2017 that I was done with feeling miserable and started researching bariatric surgeons.

‘I got pregnant with my daughter in January 2019 and gained a little, but am back to my pre pregnancy weight now.

Spot the difference! Kara says her weight loss has given her a new-found sense of confidence 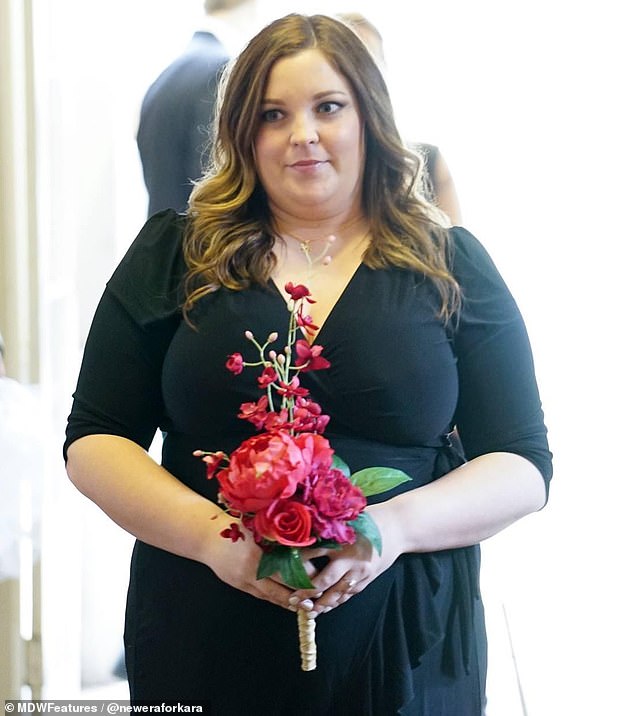 And that’s not all: ‘Since my weight loss, a lot of people have not only commented on how good I look and also how good my mental health is,’ Kara explained 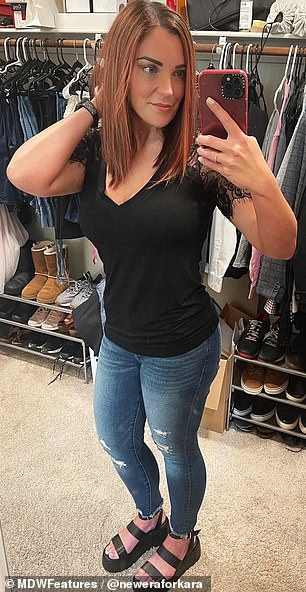 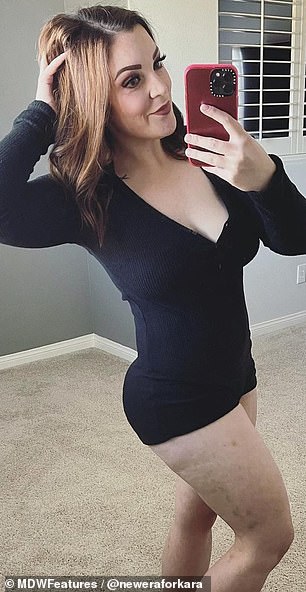 Going the extra mile: In 2020, Kara underwent further surgeries, getting a breast lift, a breast augmentation, a tummy tuck and liposuction in order to transform her slim new figure

‘I also had breast lift, breast augmentation, tummy tuck and liposuction in August 2020.

‘It has changed my life in every way possible. I am a better wife, mother and friend.

‘I used to be out of breath when I climbed one flight of stairs, but now I can go on long and intense hikes and actually really enjoy them.

‘I finally have the self confidence that I lacked and don’t shy away from people like I used to.

‘I am a stay at home mom, but I always wanted something all of my own, so I started volunteering at a local hospital as a medical professional and give COVID-19 vaccinations.

‘I love being around and talking to people now. I feel good in my clothes and enjoy getting dressed up more now.

‘For the first time in my life I feel like I am where I am meant to be physically, mentally and spiritually.

‘The hardest part was that I was used to eating so much food, that once my stomach was only able to hold just a small fraction of what it used to, I actually grieved food and big meals.

‘It sounds silly, but I was so addicted to eating poorly.

‘Since my weight loss, a lot of people have not only commented on how good I look and also how good my mental health is.

‘They can see that I’m a new person and that I’m confident in myself, which is all I ever really wanted.

‘I get the occasional comment about being too skinny now.

‘I guess you can’t make everyone happy.’ 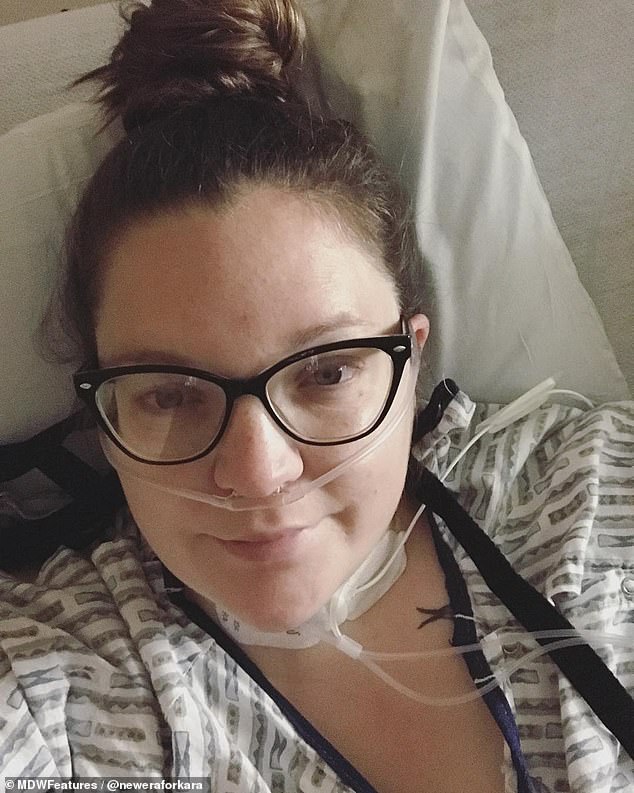 Action: Kara felt that a gastric sleeve procedure would enable her to kickstart her weight loss journey, and give her the motivation to conquer her ‘addiction’ to unhealthy food 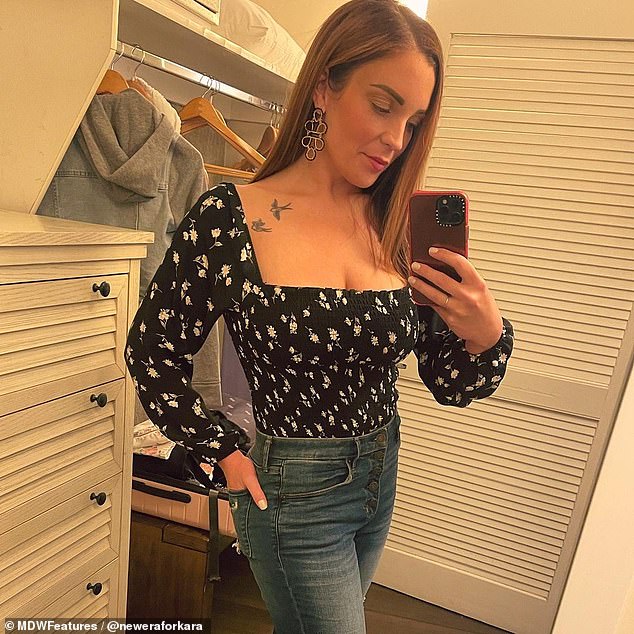 Overcoming obstacles: ‘I wasn’t lazy, I just didn’t know where to start and I thought it was too big of a task to lose weight,’ she explained 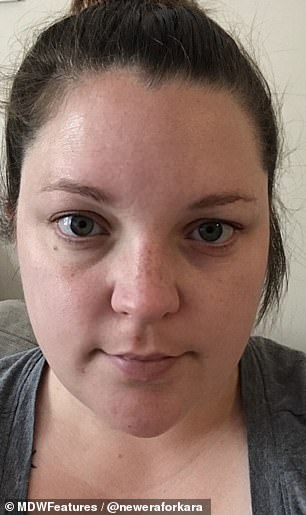 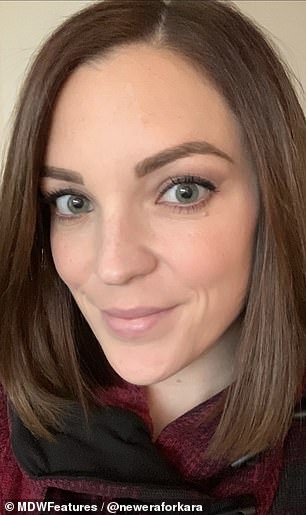 Criticism: Ironically, having been bullied for being ‘too big’, Kara now faces backlash from trolls on Instagram who say she is ‘too skinny’

Before her weight loss, Kara would eat whatever she wanted, whenever she wanted and would order fast food takeaways including pizza and Chinese, sometimes multiple times a day. Kara would snack on chocolate, soda and crisps, totaling over 3,000 calories per day.

Since her weight loss, Kara follows a high protein, low carb diet, full of fruit and vegetables. Whilst she still allows herself a treat once in a while, Kara has reduced her portion size significantly, with her calorie intake per day now averaging 1,300 per day. Kara now has the energy to go on long hikes, cycle and play golf.

For those looking to lose weight, Kara admits that it can be a daunting process, but says that taking it one step at a time is the right approach.

‘I love myself now; I used to just think I was fat and lazy,’ Kara said.

‘I wasn’t lazy, I just didn’t know where to start and I thought it was too big of a task to lose weight.

‘Start by doing some research and decide which diet is best for you and if you’d be a good candidate for weight loss surgery.

‘My first step was finding a bariatric surgeon and making an appointment with him.

‘That was a big step for me. Do what is best for you and above all, don’t give up on yourself.’

Décor galore for the design inclined