Mother-of-three is slammed after posting a seemingly innocent photo of her chipped nail – so can you spot why everyone is angry?

A mother-of-three has been slammed over a poorly executed joke on a nail-shaming Facebook page.

The woman posted a photo of her nail with a speck of blue polish on it, joking that she had just been to the salon and had been charged $65 for the work.

But eagle-eyed members of the page looked past the finger nail and realised the photo was taken while the mum was driving.

‘You’re taking this photo on the highway? I mean any street where you’re moving and taking a pic is wrong. But the highway? Hope you saw the brake lights in front of you,’ one woman said.

Hundreds of women left furious comments on the joke post. 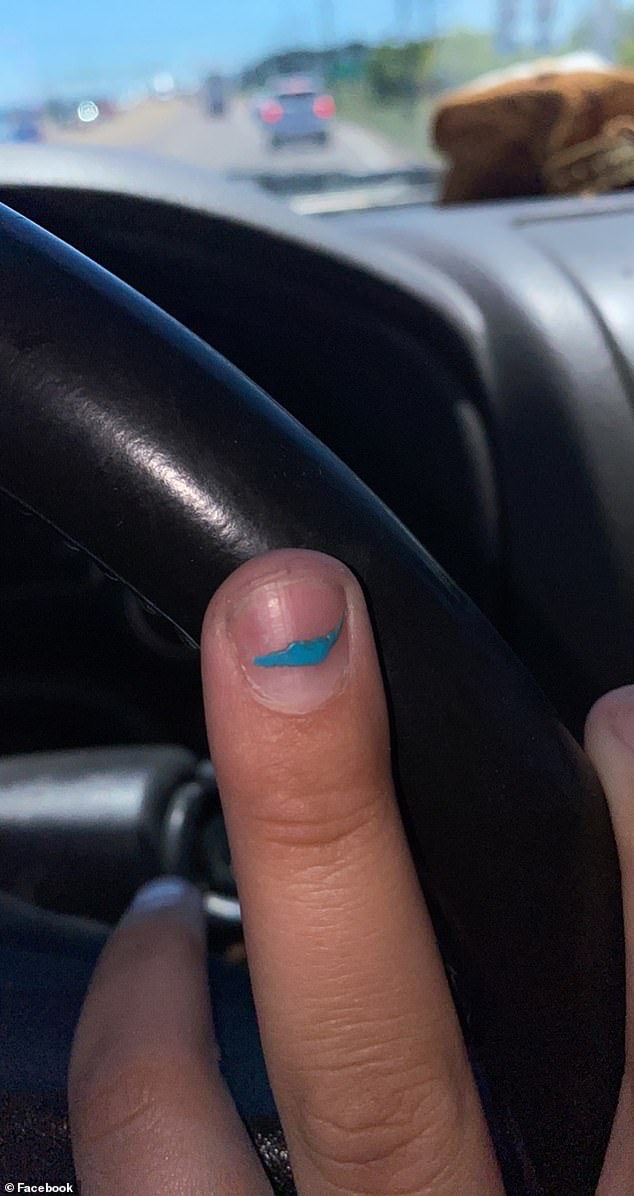 ‘Oh. Hello. I like the joke you made. Very clever. Have a lol. I have PTSD from pulling broken bodies from cars. I’ve watched people break inside after losing loved ones to avoidable accidents. Do us all a favour? Stay off your f*cking phone when you’re driving,’ one woman said on the tone-deaf post.

Another woman shared a photo of herself in a wheelchair on her prom night and revealed it was because of an accident caused by a driver using their phone to check Instagram.

‘They had to cut the entire roof and left side of my car off to get me out. I broke 17 bones, lacerated my liver, twisted c1 and c2 and fractured c7 in my spine. I couldn’t walk for three months. So maybe next time, stop the car before taking the picture. you could ruin people’s lives, forever,’ she said.

Another woman revealed how her 18-year-old cousin died in a car accident after a driver got distracted by their phone.

‘Hilarious that this should pop up today on the 8th anniversary of the time I was stopped at a red light when someone texting then hit me at full speed giving me permanent back and spinal cord injuries. Here I am, taking my morning ibuprofen, looking at the calendar, and thinking about my 5th back surgery coming up. All because someone couldn’t or wouldn’t stay off their phone while driving. Anyways, f*ck you,’ wrote another.

Hundreds of people shared their stories.

‘It’s been three months since I was hit on my bike by someone on their phone and I still can’t walk on my own but good joke I guess,’ one woman said.

Is it illegal to use a mobile phone and drive?

In NSW it is illegal to use a mobile phone for video calling, texting, emailing, using social media, to browse the internet or to take a photo.

To use the above functions on a phone the car must be parked ‘out of the line of traffic’.

It is also illegal to hold and use a mobile phone at any time while driving or riding.

Unrestricted license holders can use a mobile phone, in NSW, to make or receive phone calls, play audio or for navigation as long as it is in a cradle.

Rules surrounding mobile phone use while driving differ between states in Australia.

Others shared photos of dead family members who were killed in car accidents where drivers were using a phone.

But some people jumped to the original poster’s defence by claiming ‘everyone texts and drives’.

‘A lot of people acting like they’ve never texted while driving and I don’t believe any of you. The amount of people I see on their phones, whether it be in their hands, directly in front of the steering wheel or even mounted. Almost everyone does it,’ one woman said.

England vs Scotland will rekindle their auld rivalry at Euro 2020, 25 years after a Euro 96 classic