A mother-of-two revealed how she gave her daughter her dream Harry Potter-themed bedroom for just £350.

Sophia Daly, 32, from Nottingham, was determined to create the perfect Potter paradise for her daughter who loves the magical series.

By up-cycling her daughter’s existing furniture and sourcing second-hand accessories from the Facebook Marketplace and eBay, Sophia, who works for the NHS, was able to pull off the makeover without breaking the bank. 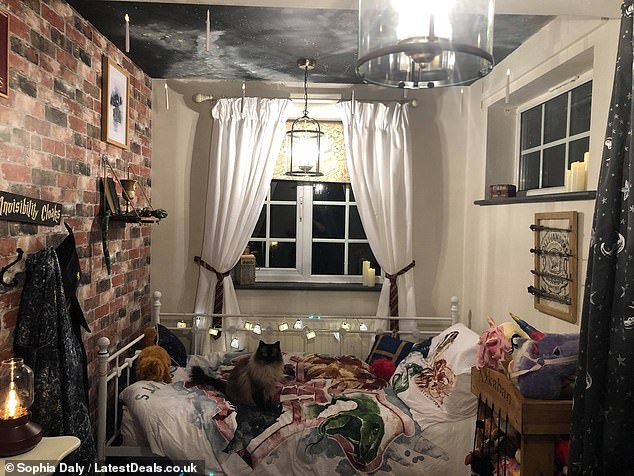 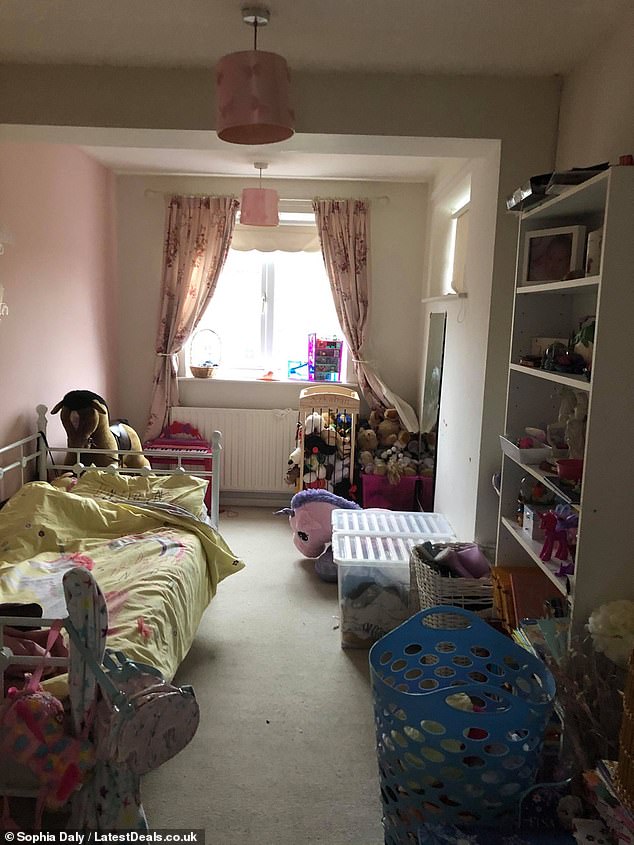 Pre-renovation: This is how the bedroom looked before Sophia got to work to introduce a drop of magic into the room

Speaking to LatestDeals.co.uk, she said that her seven-year-old daughter asked for a Harry Potter-themed room on her birthday.

With her own bedroom having been transformed into Narnia at her daughter’s age, Sophia wanted to see the project through.

Sophia said: ‘I asked my daughter what kind of Harry Potter room she wanted, and she mentioned Gryffindor.

‘So from there, I wanted to make it feel like Hogwarts and a Gryffindor dorm room.

‘I did go on Pinterest and Facebook groups for inspiration but didn’t really like anything I saw, so we sat and movie marathoned the films and I picked out subtle things that were referenced in the films but not too in your face.’ 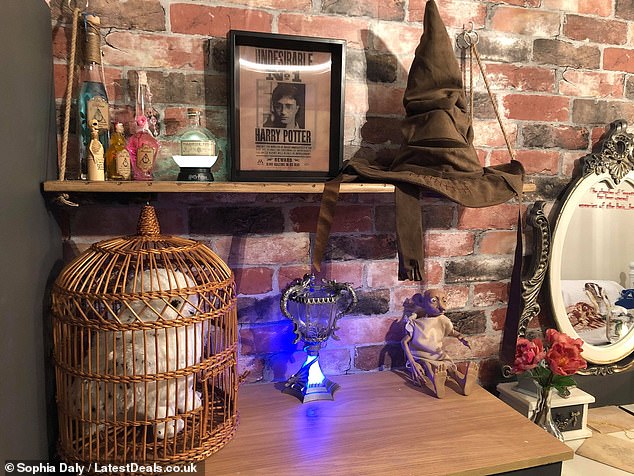 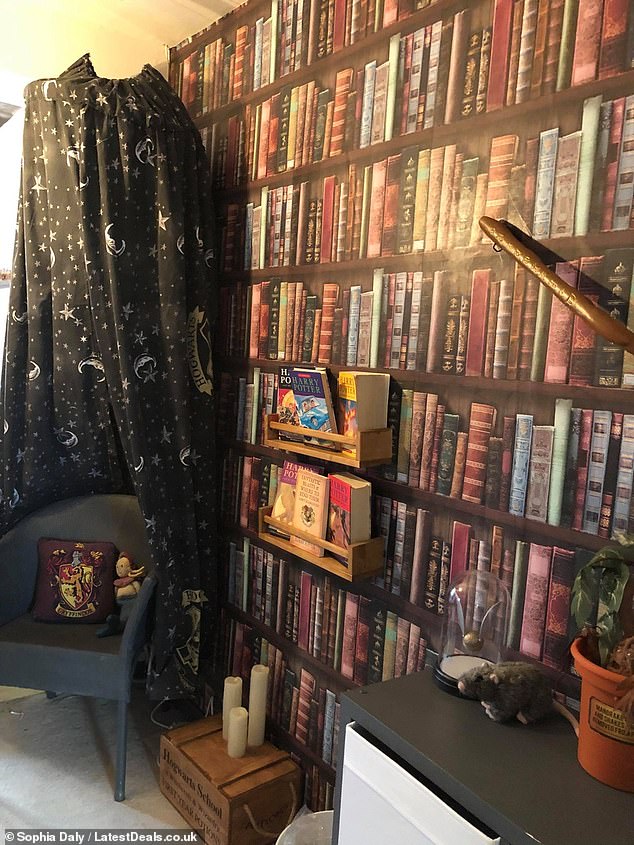 Bookcase wallpaper was purchased from Wilko and only one roll was needed to cover the entire wall. A bookshelf was added so that all of the Harry Potter books could sit among the books 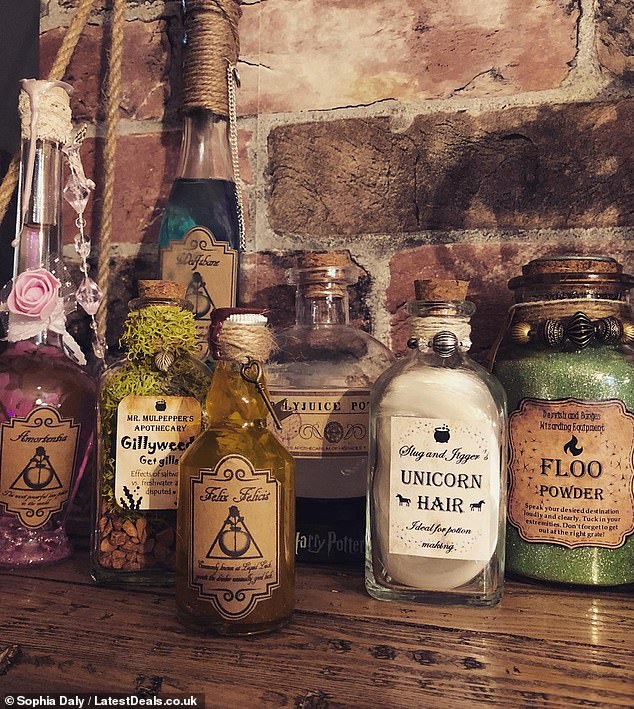 Sophia used her creativity to come up with a series of mystical decorations for the new bedroom, including these jars and vials of potion ingredients

To begin transforming her daughter’s room Sophia started with the walls, drawing inspiration from platform 9 3/4 as well as a Hogwarts library.

‘The bookcase wallpaper was from Wilko – the books have all the colours of the houses on and it was a bargain at £10. I managed to do that wall with only one roll.’

Her daughter’s furniture, from IKEA, was up-cycled in the project, with dark paint being used to create a more magical feel. 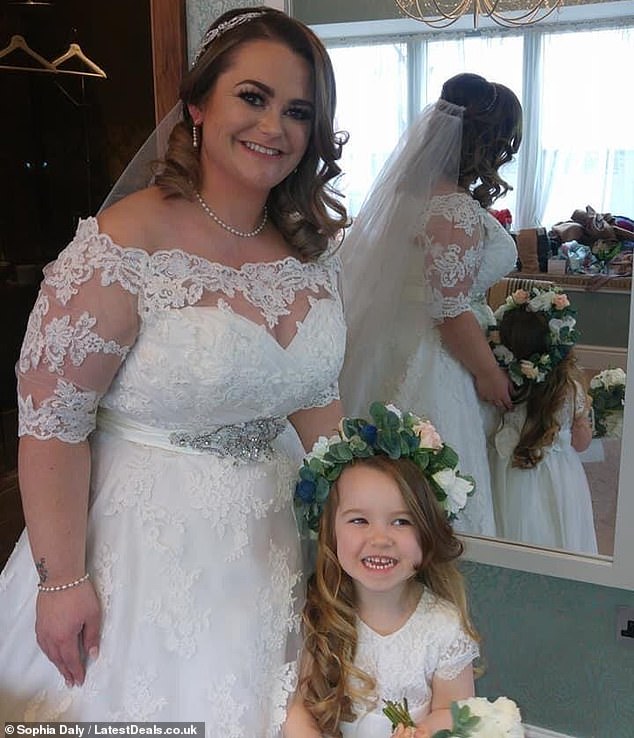 Sophia (left) said that when she was little, her grandmother transformed her bedroom into a Narnia-themed room, so she wanted to do the same for her daughter (right) 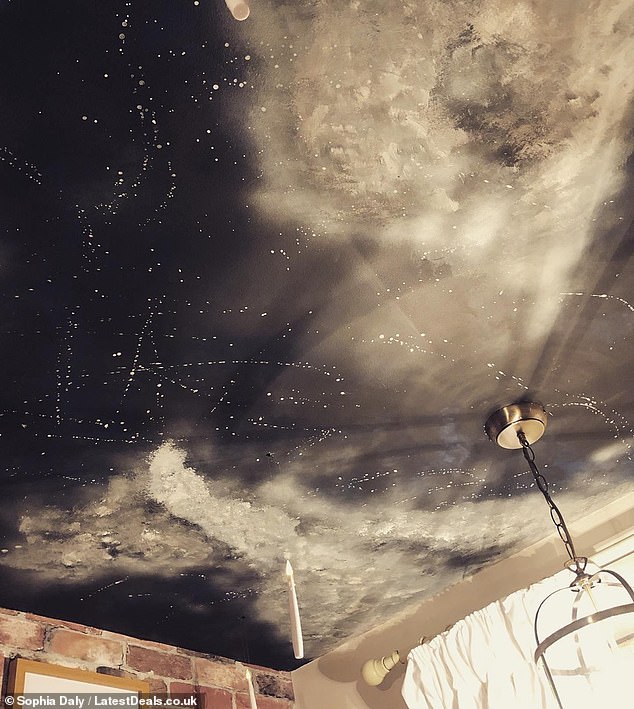 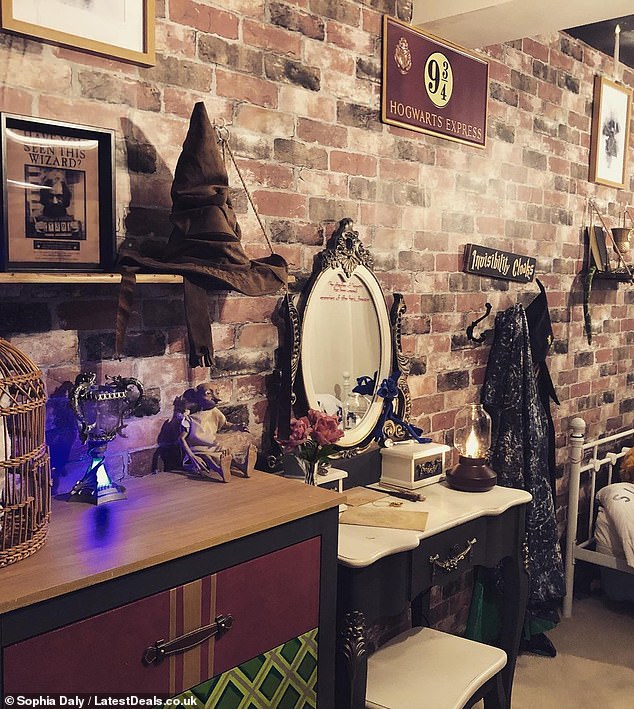 A dizzying array of Harry Potter merchandise adds character to the bedroom, with a sorting hat, Sirius Black wanted poster, a Triwizard cup and more 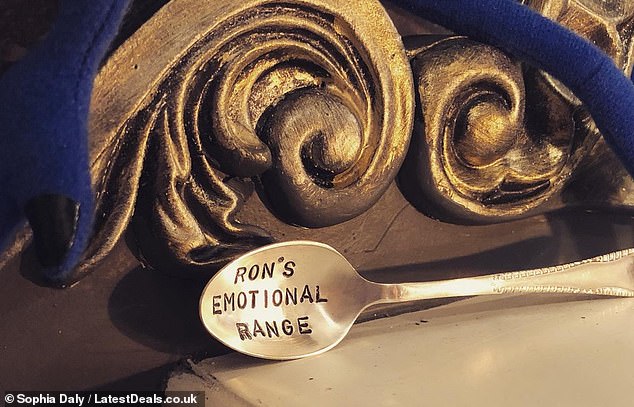 Inside joke: Sophia even took inspiration from the small jokes in the Harry Potter films for some of the decoarations

‘It worked a dream,’ she said. ‘I bought one tin and it did every piece of furniture, as well as the skirtings, windowsills and door.

‘The paint for the walls I already had from decorating another room in the house.’

Breakdown of some of Sophia’s costs

Taking inspiration from the Narnia room her Nana Elizabeth had created for her as a young girl, Sophia created a magical reading tent using a double duvet cover.

‘The keys I glued wings on, put fishing wire on and hung to the ceiling with command hooks, and same with the floating candles.

‘I revamped her blinds by glueing wallpaper to them with bookbinding glue, and I did the same for the wardrobe doors.

To keep her room clutter-free, Sophia created a miniature Prison of Azkaban where her daughter could keep all of her plush toys.

To bring the room to life Sophia purchased Harry Potter decorations and memorabilia from the Facebook Marketplace, Etsy and eBay – with 80 per cent of everything bought being second-hand.

One of the most striking elements in the new bedroom is the starry night sky on the ceiling and Sophia had to get creative to produce the visual effect.

She said: ‘I knew I wanted the ceiling to be enchanted. I’d watched videos on YouTube of people’s versions but again, I didn’t want it to be all black.

‘I got up the film again and paused it on the ceiling part and noted that there were clouds and stars.

‘I started painting black and stippled blue with a dry stiff brush. I got a video tutorial on how to do clouds easily. It said to stipple grey and white together for the fluffy cloud effect.

‘The edges were made softer by pure accident – I knew I wanted to do stars. I had some spray paint left from an old project but it was grey. 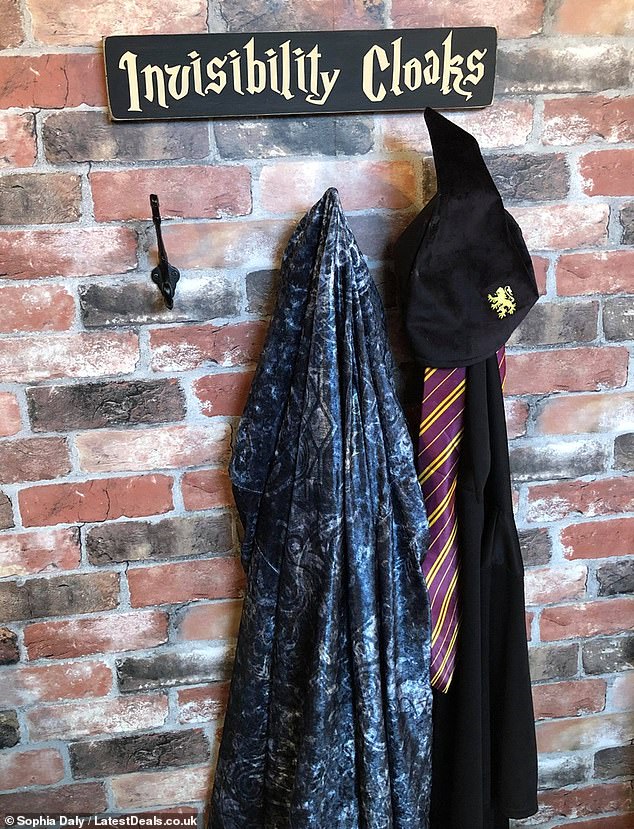 Everything in the room is related to Harry Potter, even down to the coat hooks where Sophia’s daughter can hang her cloak of invisibility 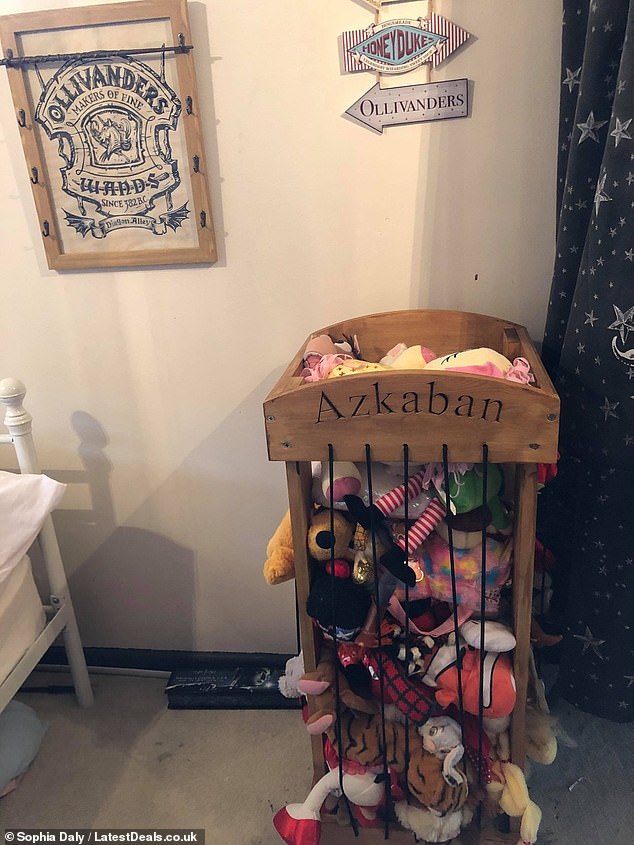 ‘So I thought I’d just test a small area, and it softened all the edges and made an almost fog-like appearance. I loved it.

‘The stars I watered down with white paint and I simply flicked the brush to give the illusion of stars.’

Sophia is delighted with how her project turned out – and her daughter is even more chuffed with her magical room.

‘My tips would be shop small and local if you can,’ Sophia adds. ‘Many do online selling and it means so much to small businesses at the moment to have the custom and the praise for their hard work.

‘I bought everything I could second-hand and did the entire room for just under £350. 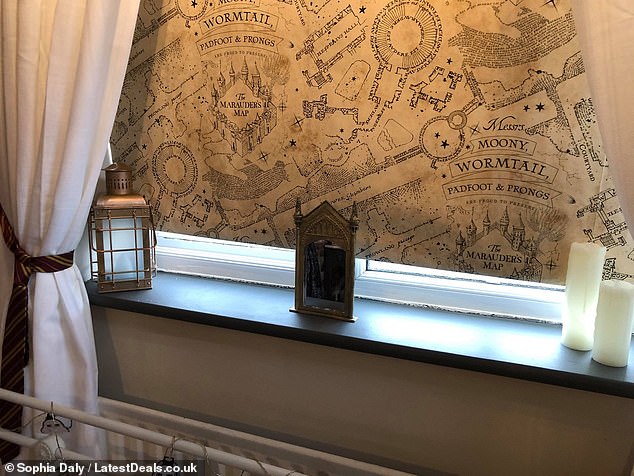 A Gryffindor school tie is used to keep the curtains tied back, while a small Mirror of Erised adorns the windowsill and a Marauder’s Map has been craftily turned into a blind for the window 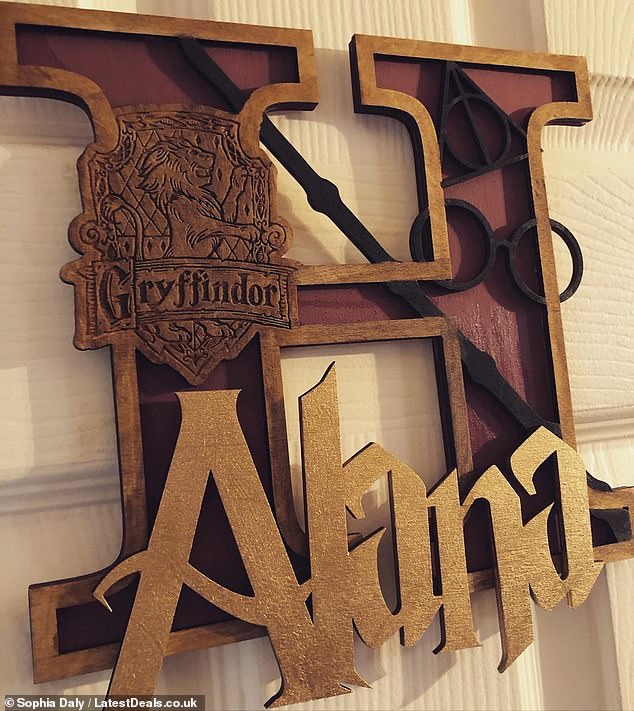 When asked what kind of Harry Potter room she wanted, Sophia’s daughter said it had to be a Gryffindor room

‘I found it calming to do during the lockdown. I knew we couldn’t get out much or that things were out of stock so I simply searched Facebook, ebay and Etsy for items.

‘It took four months of looking and buying items, and two Saturdays and Sundays to fully complete.

‘Everything was from Etsy, ebay or Facebook Marketplace, as because I bought a lot in full lockdown I couldn’t go into shops so it was online.

‘Because lots of people were redoing their homes, lots of stuff was up for sale!’

Commenting on the bedroom transformation, LatestDeald co-founder Tom Church said: ‘There have been few books and films over the years that have captured as many imaginations as the Harry Potter franchise, and we’ve all wanted to bring a bit of the Hogwarts magic into our homes.

‘Sophia’s hard work has meant her daughter Alana now has the most magical space to enjoy – and the enchanted bedroom will definitely be the envy of all her friends!’ 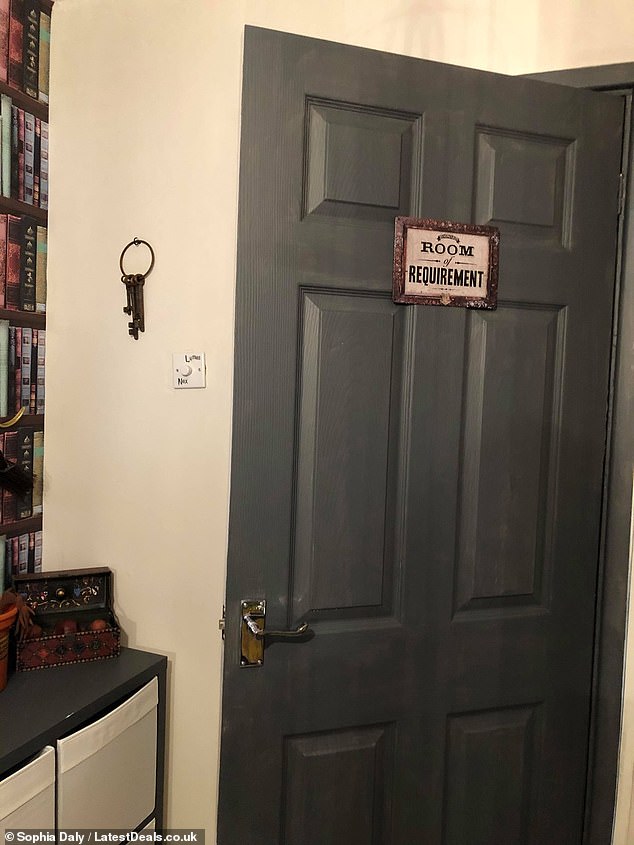 The smallest details: Sophia made sure every detail of the room was perfect for her daughter, with the light switch labelled with the magic spell for creating light and a sign on the bedroom door linking to one of the classrooms in Hogwarts