Tracey Litfin had only been married for eight months when doctors told her husband that she ‘may never wake up from her coma’ after she fell of her horse while out riding alone.

And if his wife did miraculously pull through, doctors said the young Queensland farmer may be in a vegetative state for the rest of her life.

With more than 18 years of riding experience, workers on Ms Litfin’s family’s Boonara farm, in the Gympie region, became concerned when her bleeding horse returned to the feedlot without her on September 4, 2002.

The then-21-year-old, who was eight weeks pregnant, had ridden to a paddock earlier that morning to check on the cows.

After a while her husband Michael radioed to check in, but when he was met with silence he was not alarmed as her radio had been playing up for weeks. 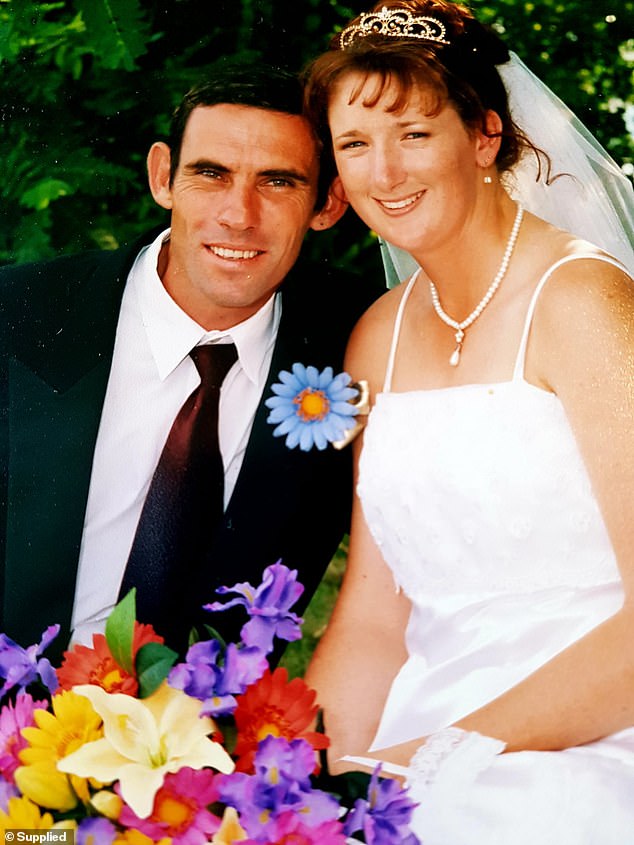 Tracey Litfin had only been married to her husband Michael (pictured on their wedding day) for eight months when she suffered an acute brain injury on her family’s Boonara farm, in Queensland’s Gympie region

But about an hour later, when the horse arrived back with gashes across its legs, a desperate search was launched across the property for the pregnant newlywed.

She was found lying unconscious in grass beneath a fence.

‘The crazy thing was I looked like I had absolutely nothing wrong with me. I didn’t have any broken bones, there was just a slight graze on my head,’ Ms Litfin told Daily Mail Australia.

‘The chopper came and picked me up in the paddock and I was taken to Royal Brisbane Hospital in a coma. The doctors didn’t think I’d ever wake up.’

Specialists discovered Ms Litfin had suffered an acute brain injury to the left side of her head when she fell off her horse.

Believing she would not recover, the hospital was granted permission in the Federal Court to have Ms Litfin’s baby terminated after she had spent six weeks in a coma.

‘I had been scared and lost. I didn’t want to listen to the doctors,’ Mr Litfin, now 47, recalled.

‘But once she came out of the coma, I started to feel better about her recovery. But at that point, they still didn’t know if she would be able to walk or talk.’ 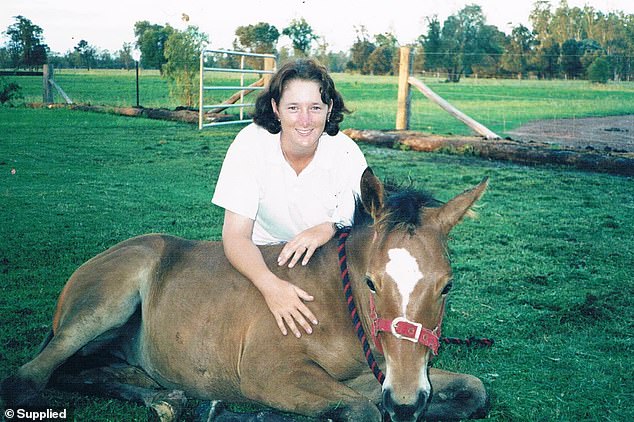 Ms Litfin has ridden horses since she was three years old. She is pictured with her childhood horse Mykey 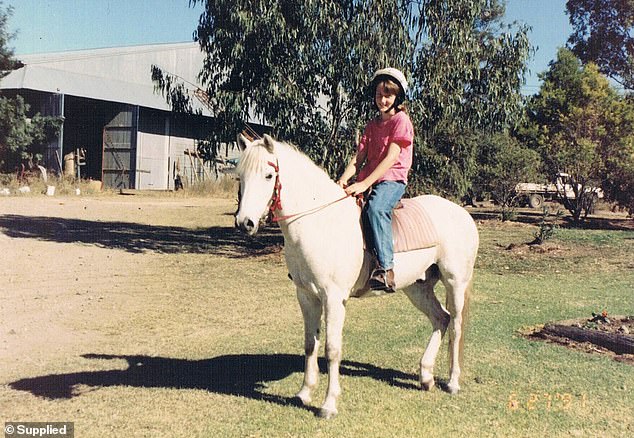 Ms Litfin spent eight weeks in a coma before waking up. Doctors said they believed she would be in a vegetative state for the rest of her life. Pictured: Ms Litfin as a child on her family farm

Waking up from what felt like a ‘deep sleep’, Ms Litfin quickly became aware she was in hospital. She had no memory of what had happened or any idea why she was there.

But as she started wriggling in her bed, she was faced with the terrifying realisation – half of her body was incapacitated.

‘I remember waking up and Michael was standing over me looking down,’ she said.

‘As much as I wanted to, I couldn’t move the right side of my body.

‘My speech was slurred and I couldn’t move my right hand, arm, or leg.’

Despite her dismal recovery prospects, the fiercely independent agriculture graduate was determined to bounce back.

Ms Litfin, who was transferred to Nambour Hospital during her coma, was sent to Caloundra Rehabilitation Centre to undergo gruelling therapy to assist with her recovery. 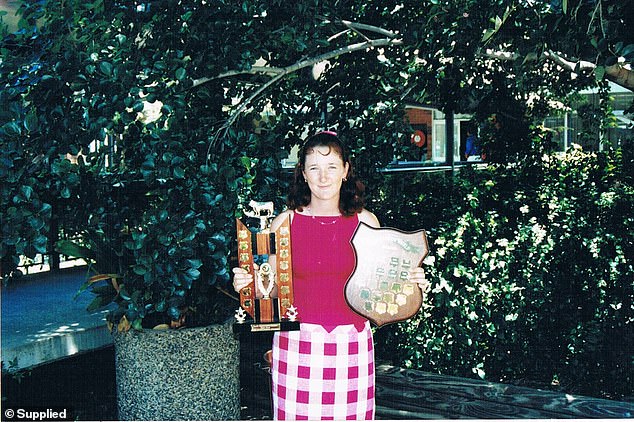 Ms Litfin, an agricultural college graduate, poses with farming awards she has received

For months, she spent hours every single week day with an occupational therapist, speech therapist, and physiotherapist.

‘It was very frustrating for me. I had been fiercely independent then here I was not able to do anything myself,’ Ms Litfin, now 39, said.

‘But that is what spurred me on. I wanted to do everything myself – and that drove me to keep going.’

It was during her rehabilitation that some of her memories started flooding back. Every time Ms Litfin would see heavily pregnant women at centre, she felt uncomfortable but did not understand why.

One day after telling Michael about the strange sensation, she remembered she was pregnant at the time of the accident. Her husband broke the news she underwent an abortion while unconscious. 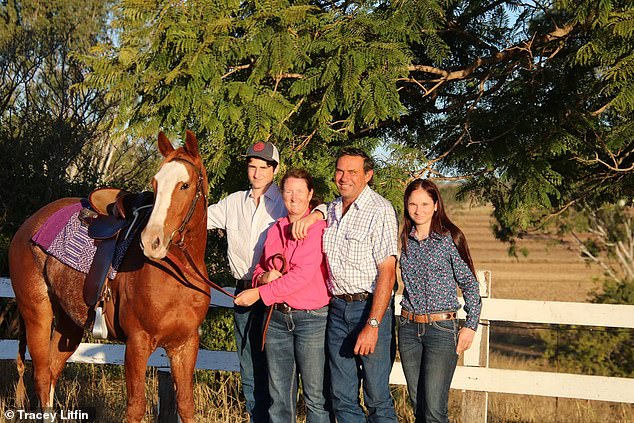 ‘It was very surreal. I had been pregnant and now I suddenly wasn’t,’ Ms Litfin said.

‘I had memories of going to the doctor, driving up to see my mum and tell her we were expecting in person, and being sick on a holiday just before the accident.

‘I was sad, but I knew [the termination] was done in my best interest.’

In May 2003, eight months after the accident, Ms Litfin was discharged from hospital. Although mobility had returned to her limbs, she still required a wheelchair for several more months.

Returning home, she struggled adjusting to being inside while Michael was working, but soon settled into a new role working in the office on the family’s farm.

Months later, the couple discovered they were expecting again, welcoming their first child, Jacob, in September 2004 – two years after the accident. 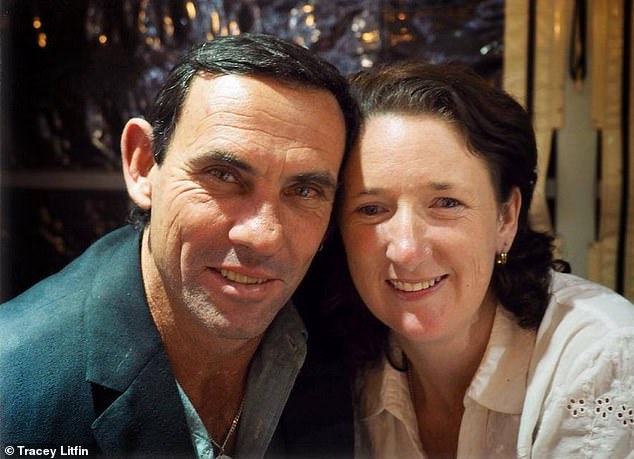 Although grappling with motherhood and adapting to the massive life change was  difficult, Ms Litfin is grateful her children, now 16 and 14, have always known her with her brain injury and said it has made them more accepting of others.

Despite her traumatic ordeal, Ms Litfin is still her ‘happiest’ when on a horse and could not wait to return to riding, getting back on the saddle six months after the accident.

Learning to ride as a child, she was always advised to ‘get back on the horse straight away if you fall’ – an adage she has found applies to all areas of life and pushed her throughout her recovery.

Ms Litfin’s speech, balance, and movement are still affected, and the accident also left her with a third nerve palsy – restriction of the movement in her right eye. 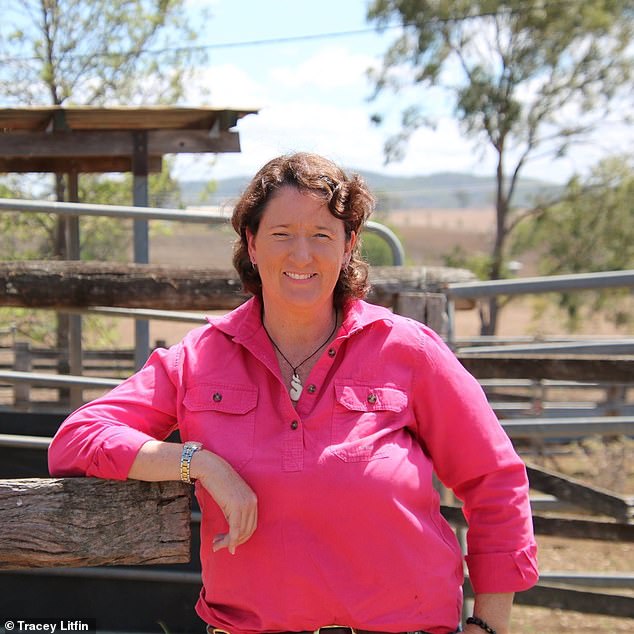 Ms Litfin has written about her life-changing experience in a book, titled If You Fall

Although Ms Litfin has her bad days, she often thinks about how worse her condition may have been.

‘I remember after one day of therapy, saying to Michael, “why me?”.

‘He replied, you weren’t good enough for heaven, and you’re too good for hell so you should bloody hell stay here. That got stuck in my brain and I draw strength on that to this day.

‘I am so grateful I am still alive.’

Ms Litfin has recounted her extraordinary journey in a new book, If You Fall, which can be purchased on her website TraceyLitfin.com.