‘Now I have to burn my house down!’ Mother shares creepy baby monitor footage of ‘massive’ spider dropping onto her baby daughter as she sleeps

This is the creepy moment a spider dropped onto a sleeping baby.

Emily Stewart’s baby monitor caught the drama unfolding in Bradley, Illinois, while her daughter Kyla was asleep in her cot.

The spider casts a huge shadow as it quickly drops down on the child after creeping across the camera lens.

The spider seemed and near the face of the baby in the footage shared on January 4.

Ms Stewart revealed that her baby is fine and she killed the spider when she saw the monitor clips the next morning.

Commenters identified the spider as a yellow sac spider which is venomous and can bite.

The spooky spider has gone viral since Ms Stewart posted the scary situation on TikTok and it has been viewed more than 3.5 million times.

Ms Stewart captioned the footage: ‘Trigger warning!! I think my life would have been better if I did not see this. Now I have to burn the house down.’ 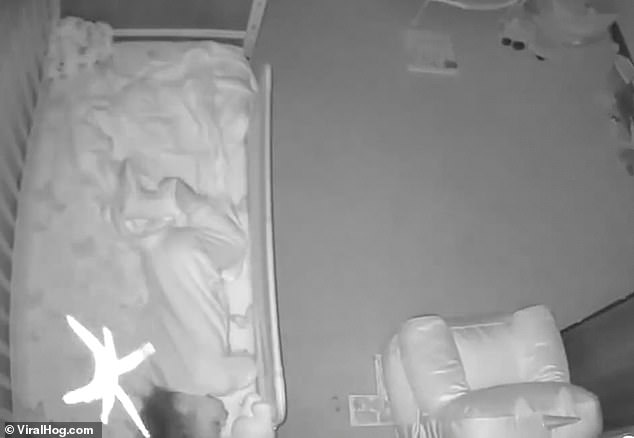 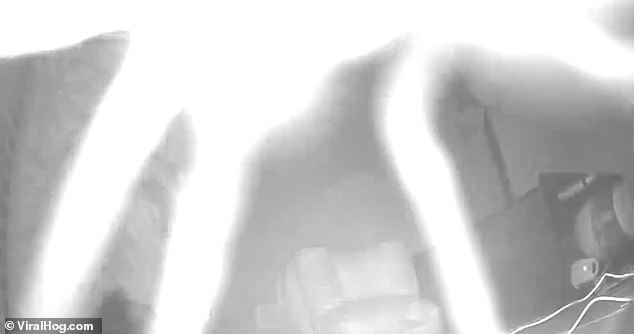 The spider looks huge as it creeps across the camera lens. Commenters commenters later identified it from Ms Stewart’s description as a yellow sac spider

The spider appears huge in the video and can be up to 3/8 inch in size.

People were amazed that the spider dropped onto the baby when it had free rein of the entire bedroom to spin a web.

Astonished commenters wrote: ‘Absolutely NOT. I’m not even even afraid of spiders but repelling onto the sleeping baby? Immediately no’ and ‘No but why is this literally one of my biggest fears?’

Others said: ‘I changed my sons diaper one day and there was literally a dead spider in his poop’ and ‘that’s the spiders baby now.’

One commenter joked: ‘He’s just here to contact you about your car’s extended warranty’ and another quipped ‘with great power comes great responsibility.’

And another relived their own traumatic spider experience, writing: ‘One time I felt a spider while in bed. I turned my flaslight on and found it on my toddlers face. Smacked him without really thinking about it. Oops!’

More commenters said the footage would have made them ‘freak out’.

Yellow sac spider bites can be painful and mildly necrotic.