Mourinho after Roma’s deadly victory over Sassuolo: Today I am a 15-year-old boy 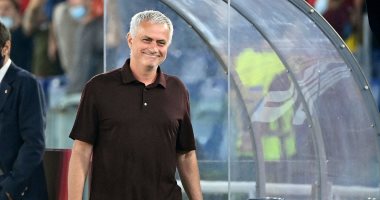 Jose Mourinho, coach of the Roma team, expressed his great happiness, after the deadly victory over Sassuolo, with two goals against a goal, in the match that brought the two teams together, on Sunday evening, at the “Olympico” stadium, as part of the confrontations of the third round of the Italian League competitions for the current season 2021. -2022.

Rome, led by Mourinho, continued his victories in the Italian league, with this victory, achieving the full mark by winning the three matches he played.

Mourinho said, in statements after the end of the match: “What a game and what a mentality of the players, but I do not want to forget the match that Sassuolo played, they must be praised.”

On his hysterical celebration after the winning goal, Mourinho said: “Today I am a 15-year-old boy, not 58 years old. I am very happy.”

He concluded: “I have been a liar over the past days, I have been saying all week that this is not a special match for me, this was the 1000th match.”

The first half ended with Roma advancing with a goal, scored by Italian international midfielder Brittane Cristante in the 37th minute.

In the second half, Serbian international Filip Djuricic scored the equalizer for Sassuolo in the 57th minute, which is his second goal this season in the competition..

The substitute, the Egyptian striker, Stephan El Shaarawy, managed to score the winning goal for Roma in overtime, so that Rome scored 3 valuable points..

El Shaarawy came as a substitute in the 69th minute, instead of the Armenian Henrikh Mkhitaryan.

The victory raised Roma’s balance to 9 points, to occupy the top of the Italian League standings, with a goal difference from Milan and Napoli, while Sassuolo’s balance stopped at 4 points in ninth place..

A hysterical celebration for Mourinho after El Shaarawy’s killer goal against Sassuolo.. Video

Renewal of the Judiciary: “Judges elected by judges” | Opinion

Renewal of the Judiciary: "Judges elected by judges" | Opinion