Mourinho before facing Zorya: Roma seeks to win the conference league and the changes are few 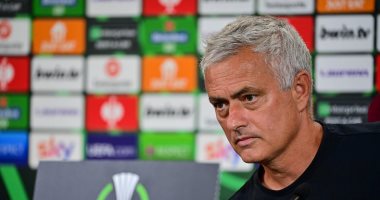 The Portuguese coach, Jose Mourinho, the Italian Roma coach, spoke about the match between the capital’s team against his Ukrainian counterpart, Zorya Luhansk, in the match that will bring them together at 7:15 pm, tomorrow, Thursday, at the “Slavotech Arena”, as part of the second round of the second round of the group stage of the European Conference League for the current season. .

Mourinho said during the match press conference: “There is no point in talking about the candidates, we will play with the goal of winning, we have a difficult match, but we are ready for it and we seek to recover quickly.”

Mourinho added, “I played against Zorya 4 times a few years ago, in December and the conditions were different. I haven’t seen the condition of the stadium yet, but the climatic conditions are suitable for playing from my point of view.”

“Our goal is to qualify and we are the leaders of the group, and of course we want to win the European Conference, but now we have to win tomorrow,” the Roma coach stressed.

Jose Mourinho continued: “Zorya has always played in a very organized way 4-4-2, and they will put us in front of a difficult task. There are no big differences between the competing teams at the moment and there is no point in talking about the candidates only, but it is clear that we will play with the goal of winning and the important thing is to play with great concentration.” .

He concluded: “Changing is one thing, and playing in the second team is another. For me, this concept does not exist, but we need to rest some players and I will not change much in the formation.”

Is Dollar Tree stock a buy as shares rally 16% on additional buyback?

Is Dollar Tree stock a buy as shares rally 16% on additional buyback?