England fans today accused ‘hypocritical’ MPs and celebrities of jumping on the ‘bandwagon’ by posing for ‘cringe-worthy’ photos of them celebrating the Three Lions’ victory over Denmark – despite showing little or no obvious passion for the game before last night’s semi-final.

Prime Minister Boris Johnson went to the Euro 2020 match at Wembley last night in his Three Lions shirt with ‘Boris 10’ on the back with his new wife Carrie also in the Royal Box surrounded with VIPs in suits.

Many of Mr Johnson’s cabinet have been branded ‘fair weather supporters’ after being pictured wearing or clutching the team’s strip, with people taking to social media to ask: ‘Wonder how many MPs have submitted a Sports Direct receipt for an England shirt in the last few days?’

Before setting off, the PM had posted a photo of himself on social media with his hands in the air showing off his new shirt with the caption: ‘We’re behind you’ sparking a flurry of tweets. One critic, Julian Shea, tweeted: ‘All aboard the Euro 2020 semi-final bandwagon’.

One critic said: ‘Boris Johnson parading himself around in an England shirt. He’s not a genuine football fan, he’s a fairweather supporter trying to share in their success by association. Typically cynical, populist, and manipulative behaviour’.

Home Secretary Priti Patel was mocked for posting a photo as she cheered before the game last night, wearing an England shirt which eagle-eyed social media users claimed appeared to have been taken straight out of the packaging.

Twitter users pointed out creases on the sleeves and claimed Miss Patel ‘literally just took the shirt out of the packet to pose for the photo’ – with some alleging that she previously said she doesn’t really follow football.

Sir Keir Starmer also tweeted a photo which showed him celebrating the Three Lions’ historic victory over the Danes at Wembley, and used the hashtag #ItsComingHome. However, the Labour leader has made no secret of his love for football. He is an Arsenal supporter and plays football with his friends.

And broadcaster Kate Garraway also got on in the act, turning up for work at Smooth Radio in an England bucket hat with ‘It’s Coming Home’ on it – before heading inside to play listeners Sweet Caroline by Neil Diamond, which has been adopted by the team and its fans. 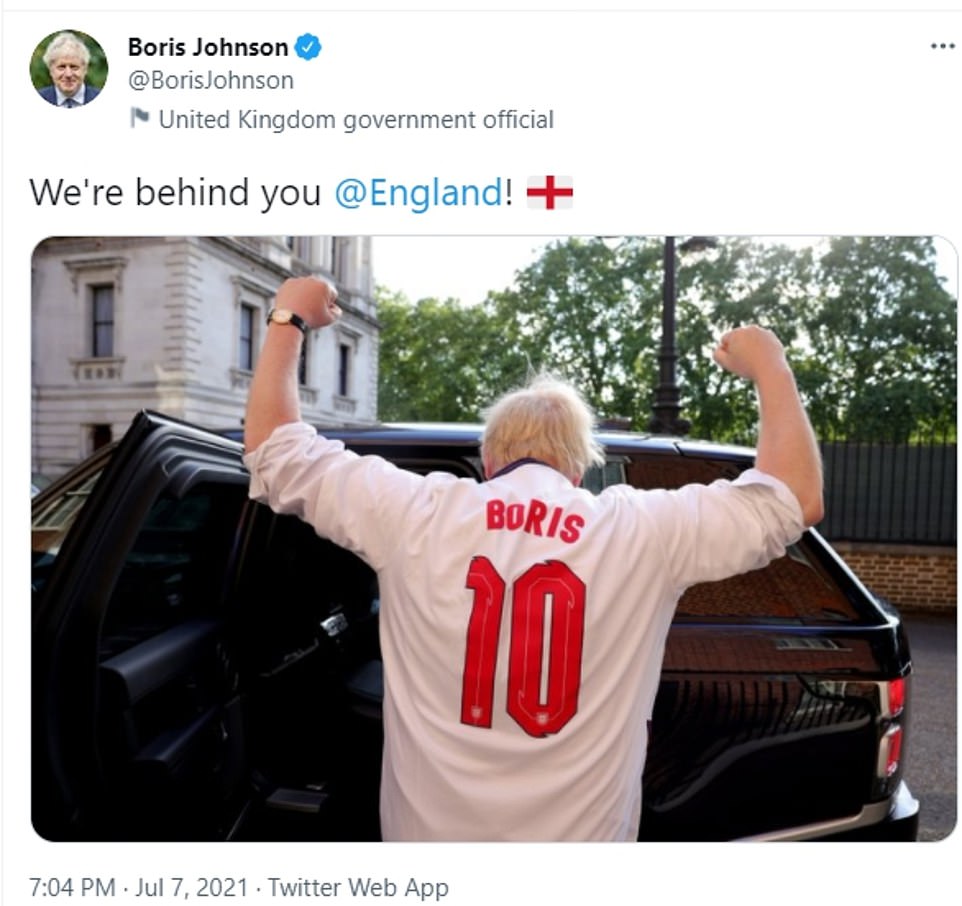 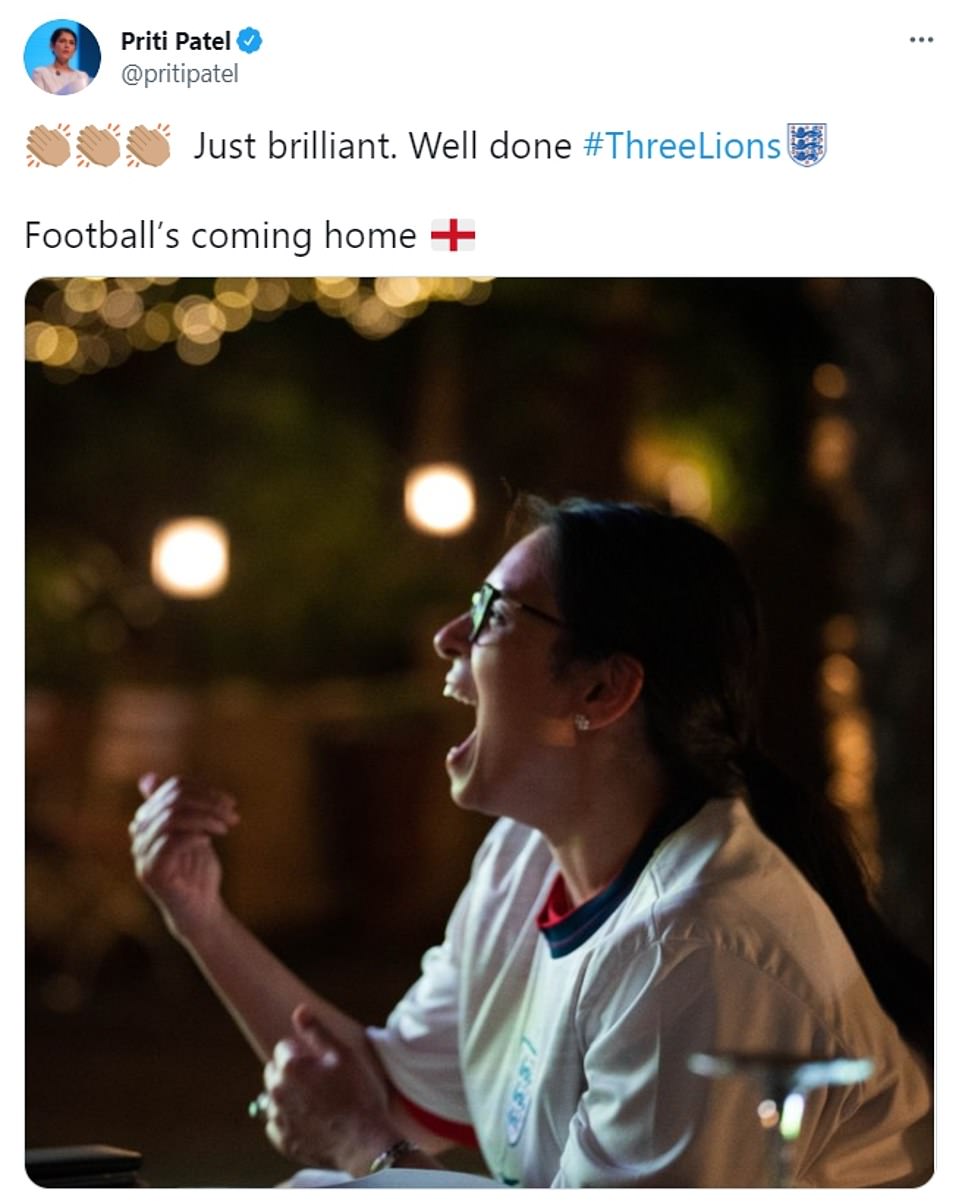 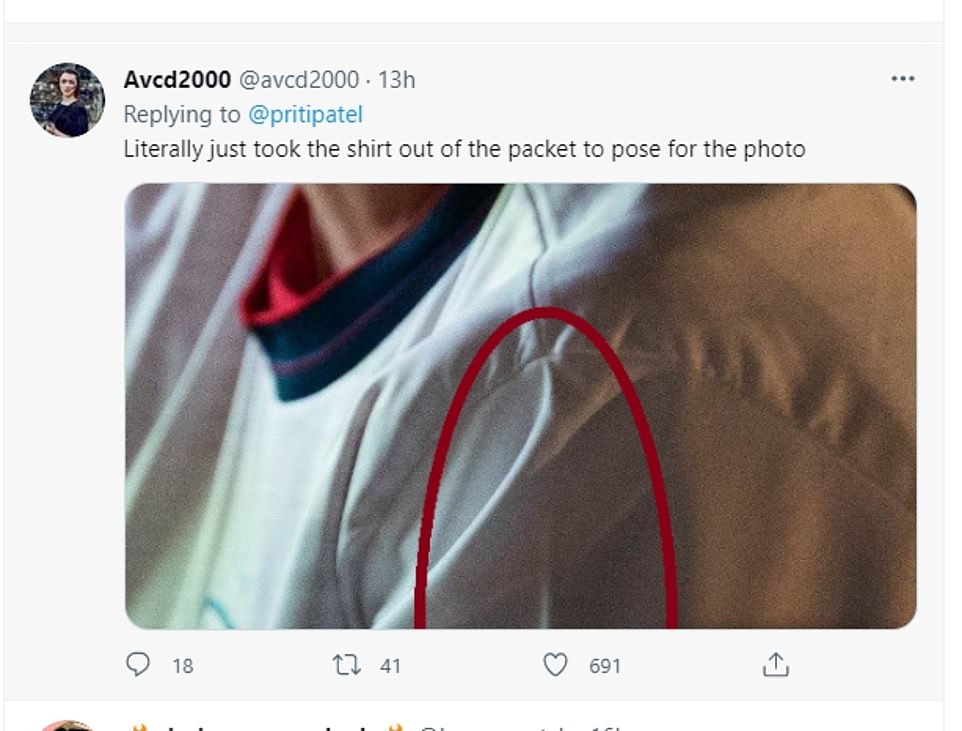 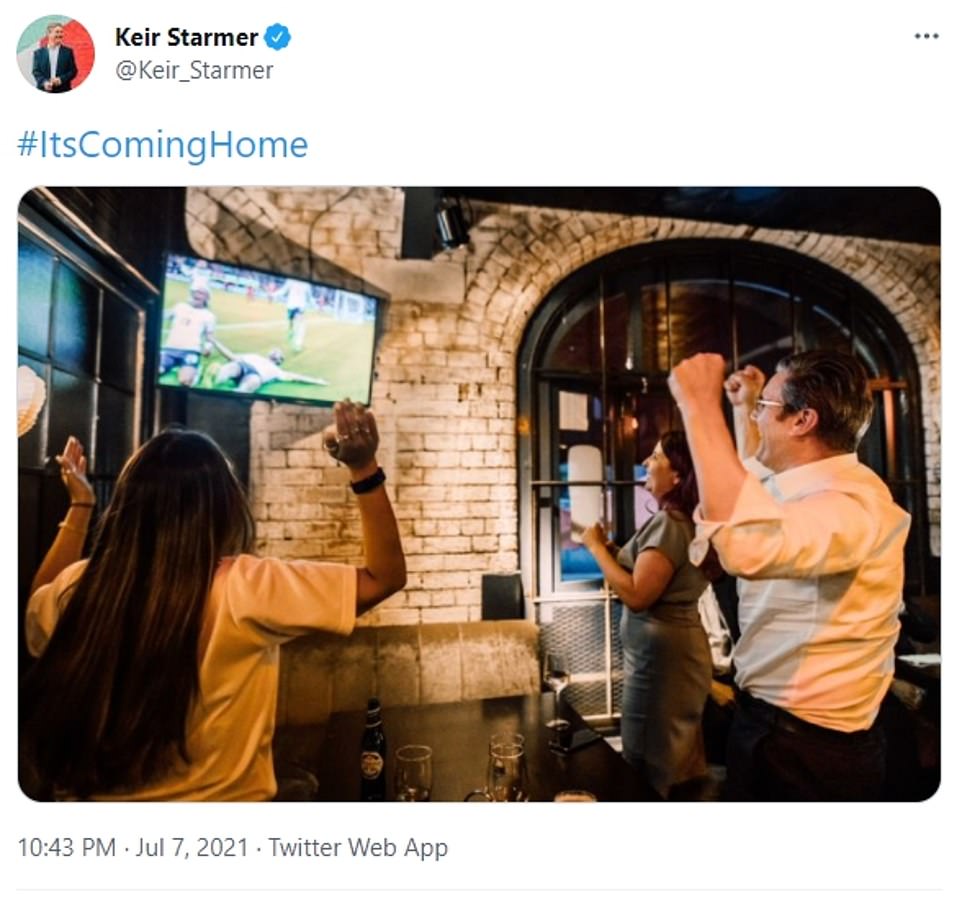 Sir Keir Starmer also tweeted a photo which showed him celebrating the Three Lions’ historic victory over the Danes at Wembley, and used the hashtag #ItsComingHome 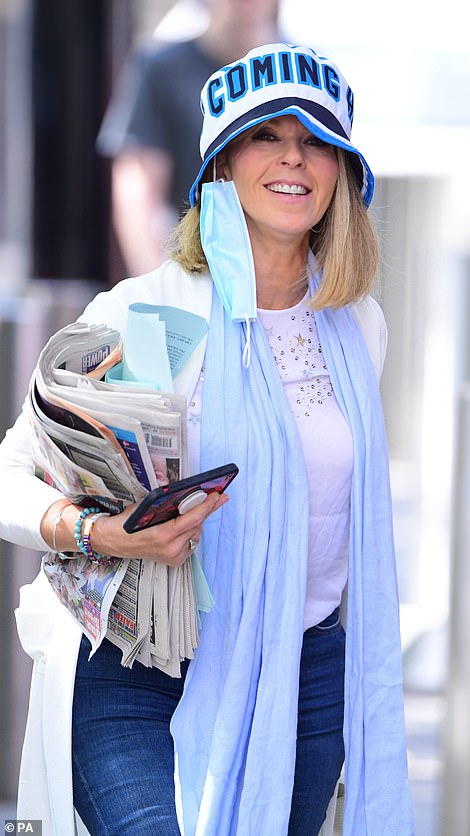 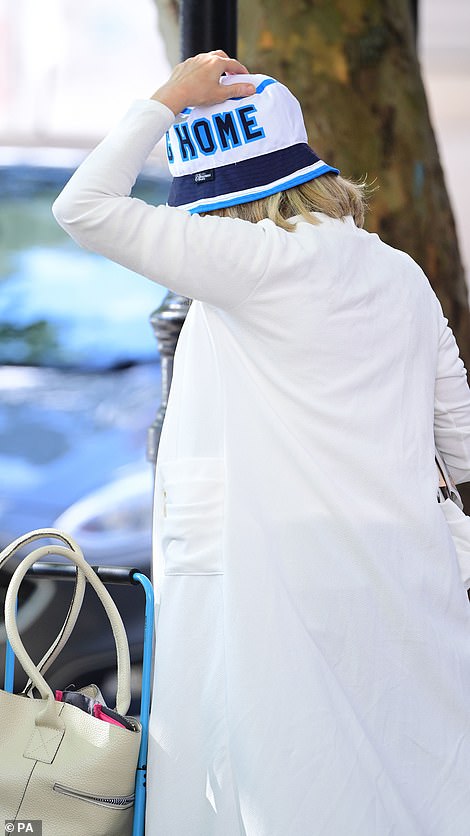 Companies and schools to open LATER on Monday morning following England’s Euros final on Sunday as No10 urges bosses ‘to be flexible if they can’ – with nearly 200,000 fans calling for it to be a Bank Holiday

Company bosses and even schools are telling customers and pupils they’ll be opening late on Monday to give everyone a chance to recover following England’s Euro 2020 final on Sunday.

Amid mounting calls for a Bank Holiday if England beat Italy at Wembley on Sunday night, business owners are taking the initiative by allowing staff time off on the following Monday morning.

One business owner told MailOnline they would be letting employes come in up to three hours later than usual, meaning staff can ‘sleep off their sore heads’.

It comes as more than 150,000 optimistic Three Lions fans have now signed a petition demanding a day off if Gareth Southgate’s men make history by becoming the first England side to win a European Championships.

And while Boris Johnson remained coy on the issue, Number 10 today suggested bosses offer some leeway, by urging employers to be flexible ‘if they can’ with staff who want to start late on Monday morning.

In the past week or so a tsunami of ministers and MPs including Rishi Sunak were pictured putting on an England jersey – complete with tags – some suggested: ‘I take it all the Tories were given a free shirt’.

Others watching the last night’s semi-final commented on the number of politicians at Wembley, where new Health Secretary Sajid Javid was pictured bumping elbows with Labour’s Mayor of London Sadiq Khan.

One said: ‘Tory MPs who have very, very vocally denounced ‘gesture politics’ are all lining up to have action shots of them wearing England shirts’.

More than 90,000 optimistic England fans have now signed a petition demanding a day off if England win Euro 2020.

The petition calls for Monday to be made a Bank Holiday if the Three Lions triumph against Italy at Wembley on Sunday.

A host of stars were also at the match.

Rochelle and Marvin Humes got to enjoy the match from the stadium, and they shared videos of the moment Kane made his penalty goal and the euphoria they and the other fans felt.

The presenter was seen squealing in delight as she and her husband danced up and down with joy, as the other fans that surrounded them also cheered.

In her post, she shared: ‘It’s only b****y coming home!!!!!! O M G Thanks so much @heineken for having us tonight #EnjoyTheRivalry’.

Olly Murs was also beside himself over the results, in a video taken by a friend he was seen looking tense as he waited for Kane to score and after he did shouted in glee.

He then jumped up and down and shouted in delight with his friends, and wrote in the caption: ‘The moment when Harry Kane actually made my heart skip a beat! GET IN!!’

Meanwhile, Ashley Cain was seen jumping up onto a bar and downing a pint in delight after Kane’s goal.

Earlier in the day, James Corden reunited with his family at Wembley stadium, after 18 months apart, to watch the match in person.

The Gavin and Stacey star, 42 – who now lives in America – took to Instagram to share a photograph of himself with his parents and two younger sisters in the stands.

Alongside the cute shot, James wrote: ‘It’s been almost a year and a half since I’ve been in the same room as my mum, dad and my sisters, And what a room to be in! 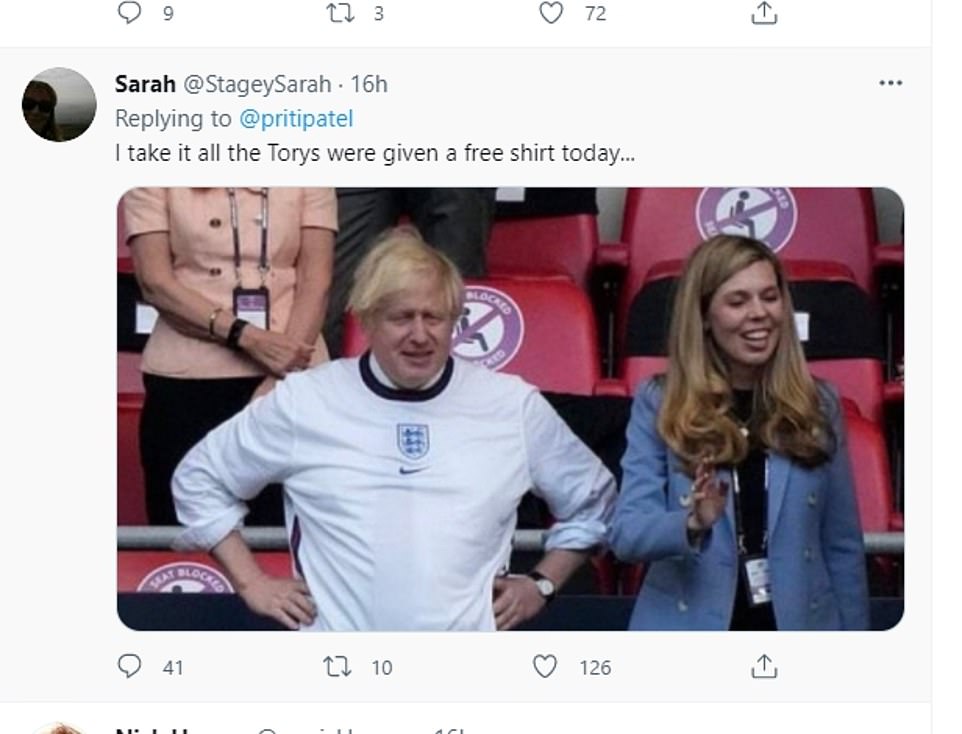 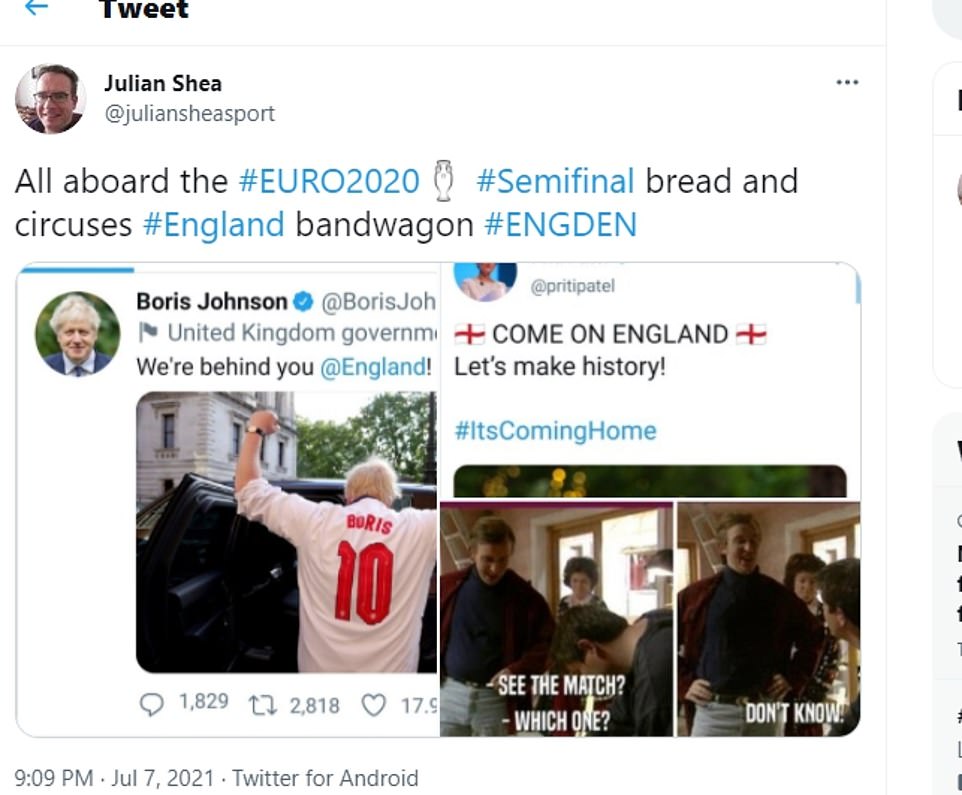 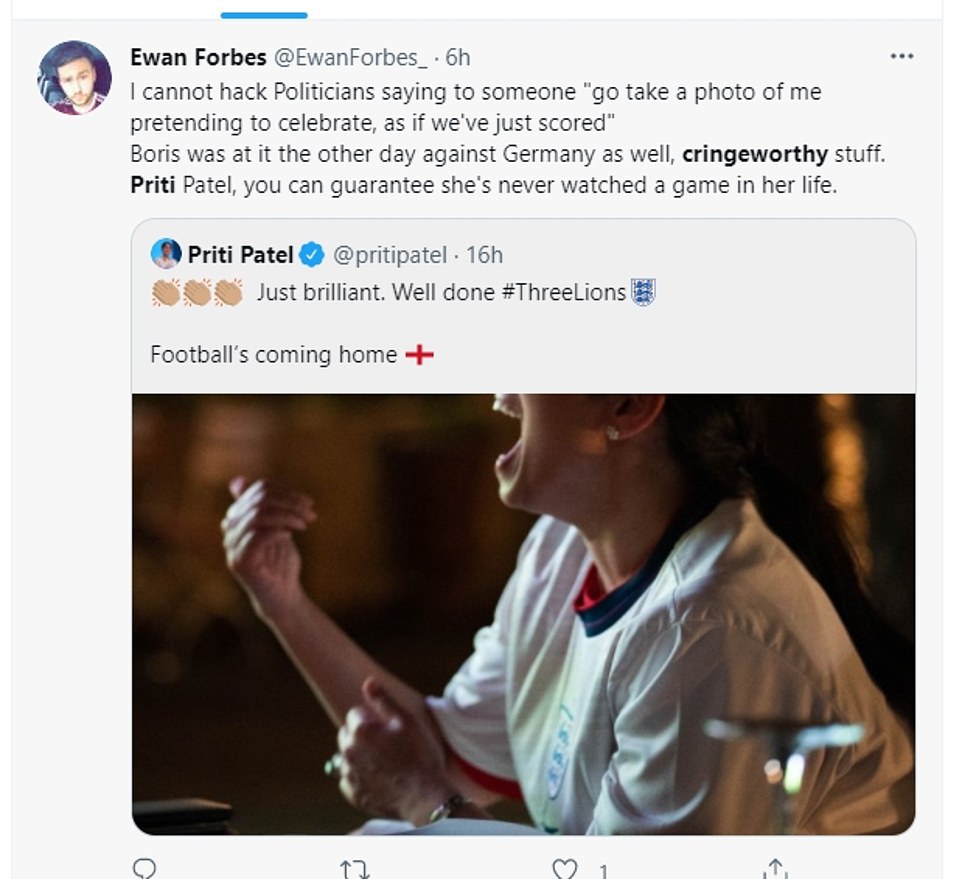 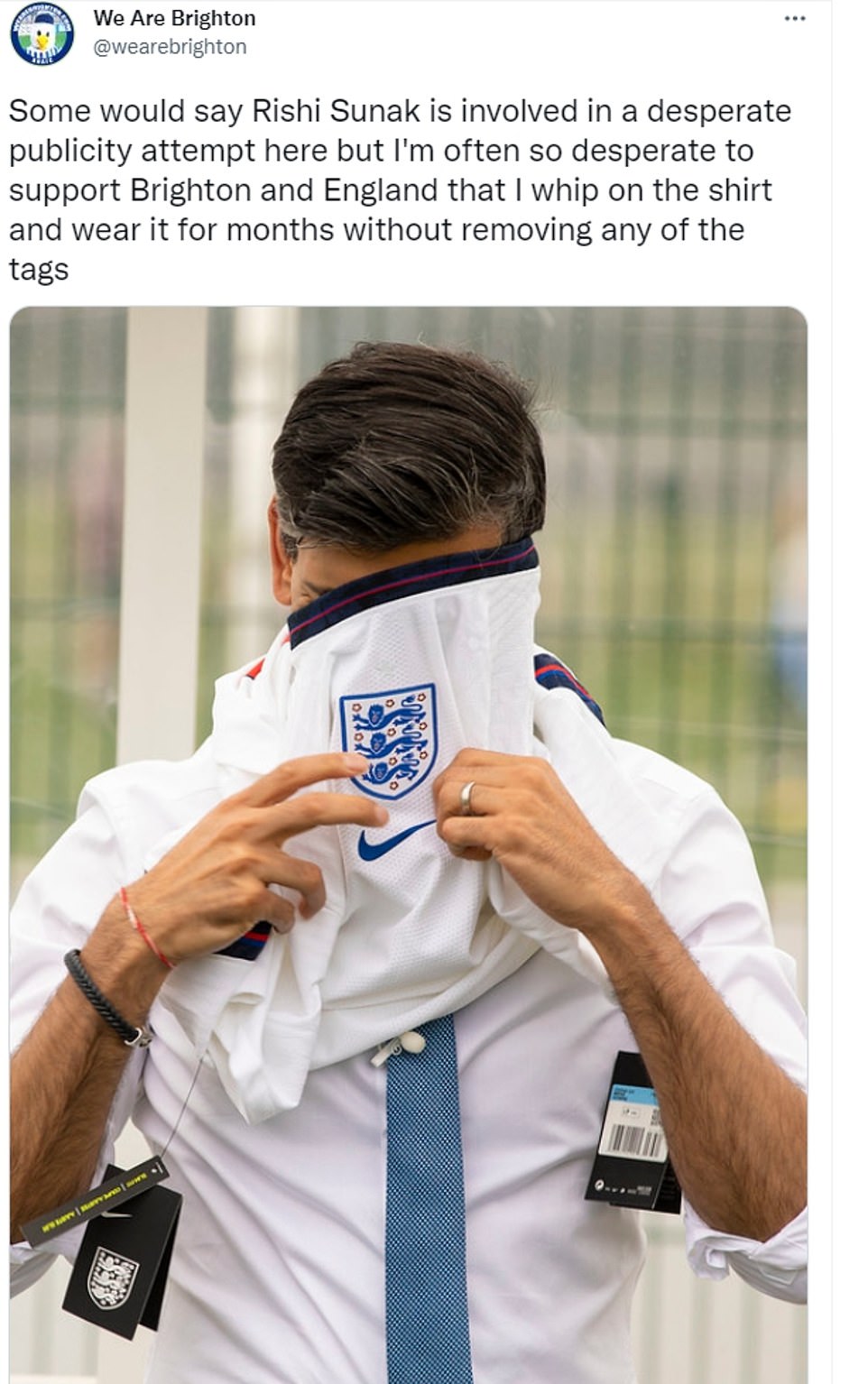 Rishi Sunak was shown putting an England shirt with tags on 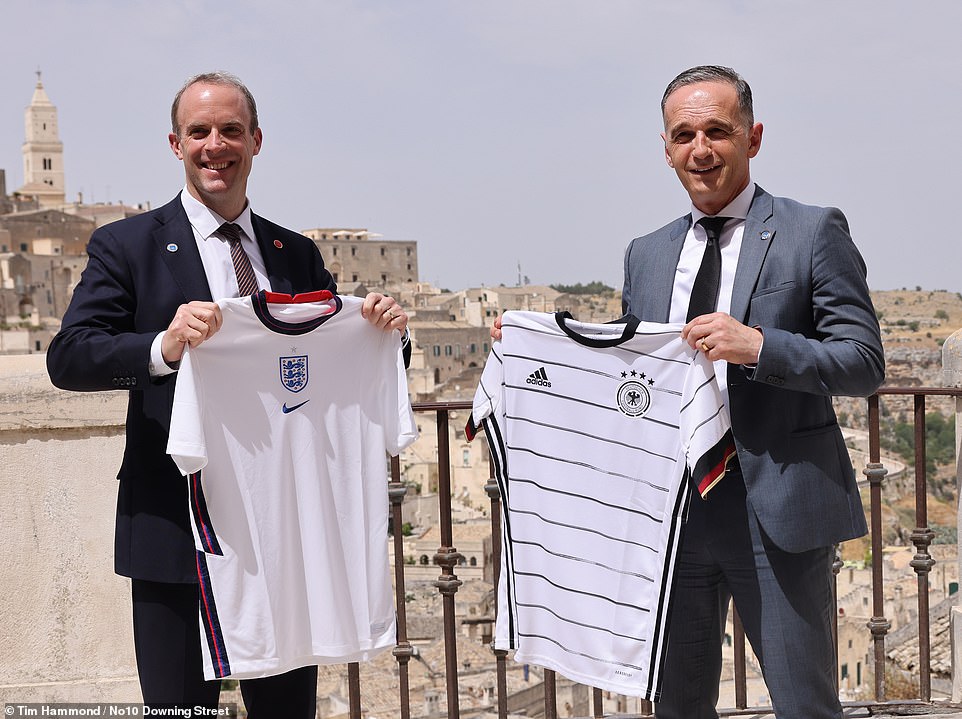 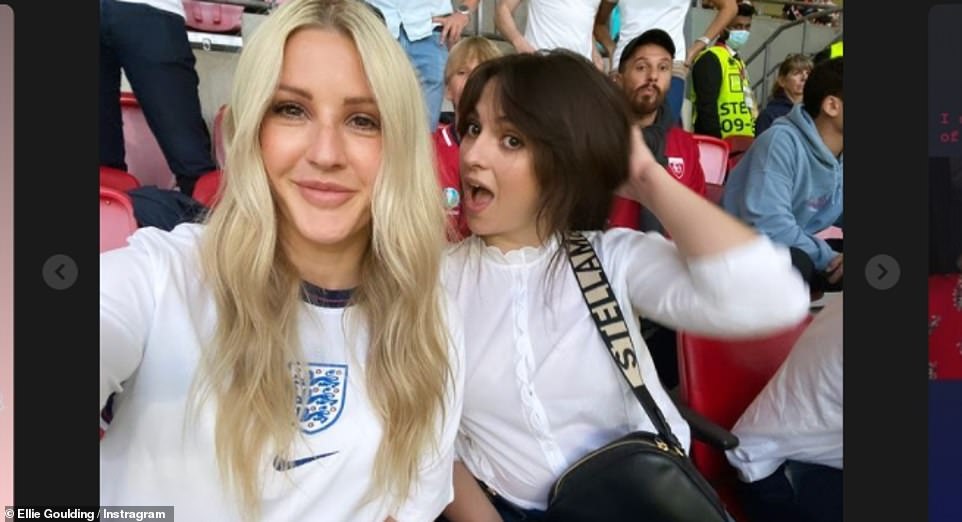 Cheering them on: Ellie Goulding watched the match from the Royal Box and was in high spirits as she danced around with her pals 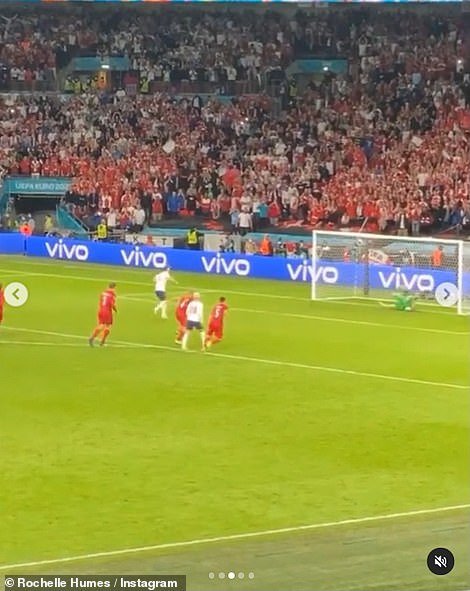 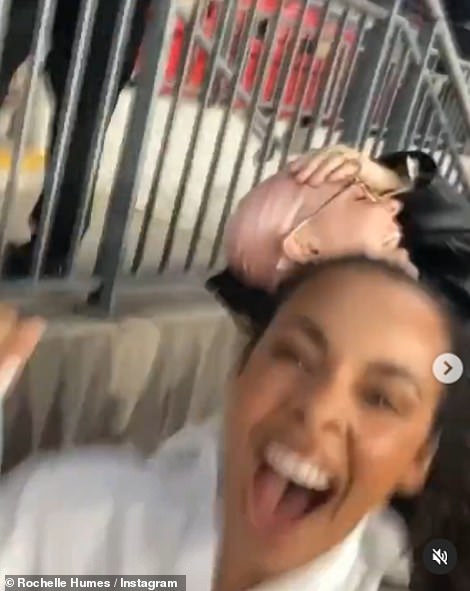 Score! Rochelle and Marvin Humes got to enjoy the match from the stadium, and they shared videos of the moment Kane made his penalty goal and the euphoria they and the other fans felt 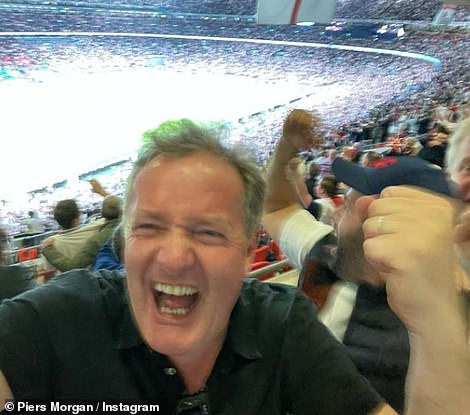 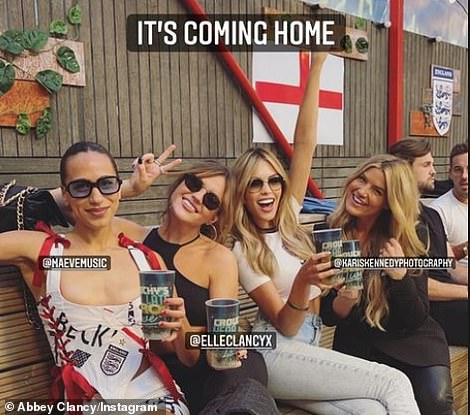 Cheering: Piers Morgan was seen celebrating the win in the stands, while Abbey Clancy shared a snap with her friends 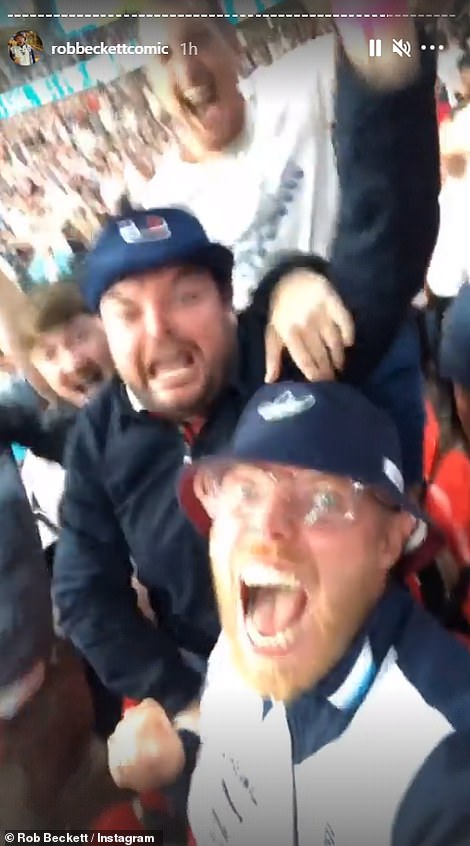 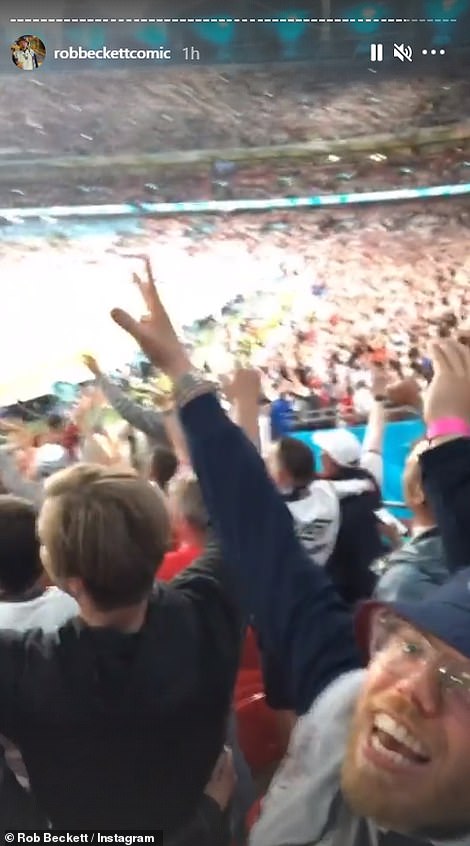 Wild: Rob Beckett was excited beyond belief after the game finished with England’s win 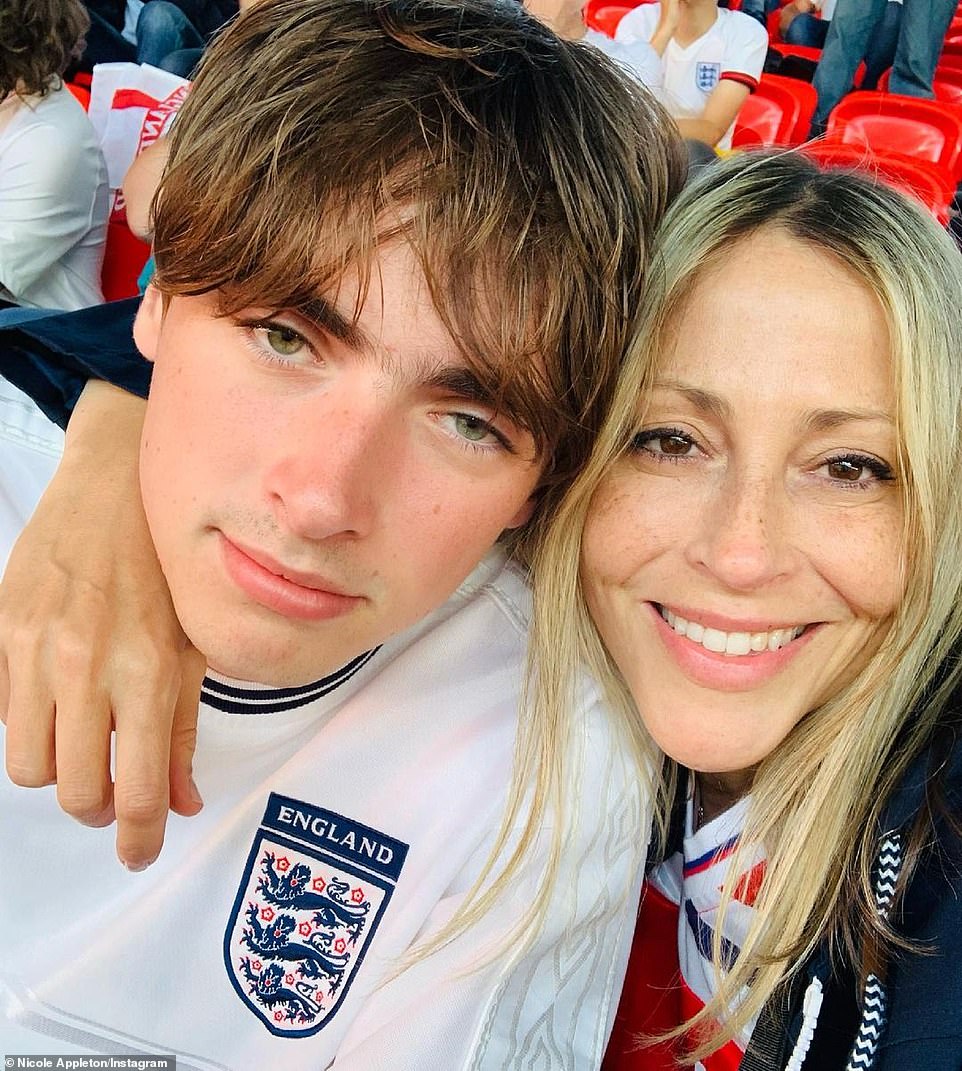 Family: Nicole Appleton and son Gene Gallagher were also at Wembley to enjoy the match 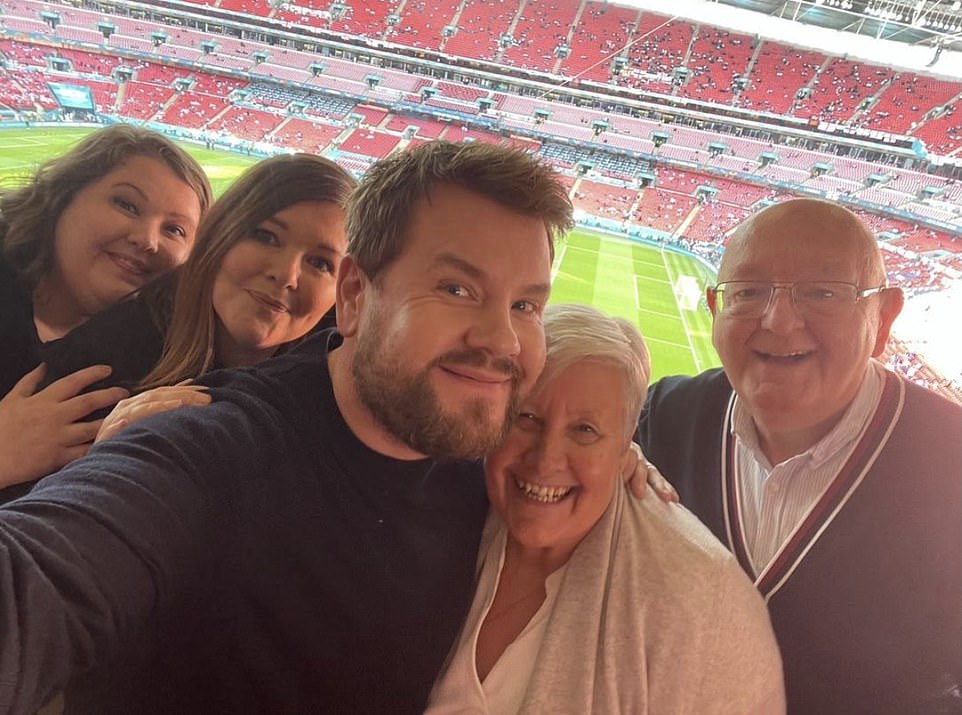 He came home! Earlier in the day, James Corden reunited with his family at Wembley stadium, after 18 months apart, to watch the match in person

Meanwhile, England fans today face a desperate rush to book a space at a pub after Gareth Southgate‘s side set up the mouth-watering clash.

The day is now being dubbed as ‘Super Sunday’ for the hospitality industry – with the Wimbledon final also due to take place on the same day.

Boris Johnson today appeared to pour cold water on the clamour for a Bank Holiday, saying it would be ‘tempting fate’. And one Tory MP remarked to MailOnline ‘we haven’t won anything yet’.

When asked about the possibility of a Bank Holiday, the Prime Minister told Sky News: ‘I think that would be tempting fate. Let’s see what happens.’

However Number 10 today did suggest giving leeway to those wanting the watch Sunday’s crunch match. Today they urged employers to be flexible ‘if they can’ with staff who want to start late on Monday. 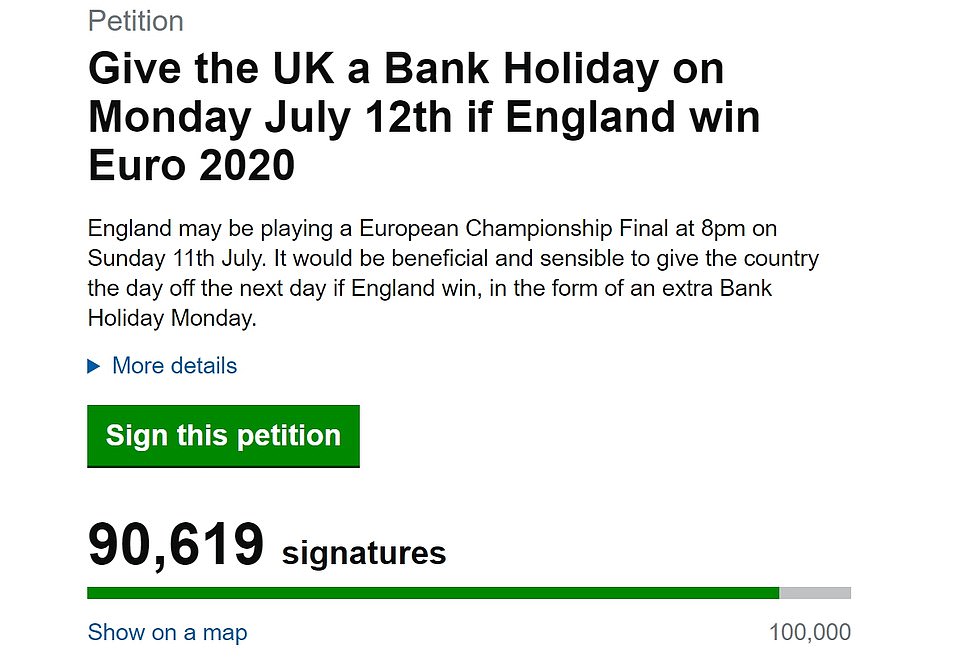 More than 60,000 optimistic England fans have signed a petition demanding a day off if England win 2020 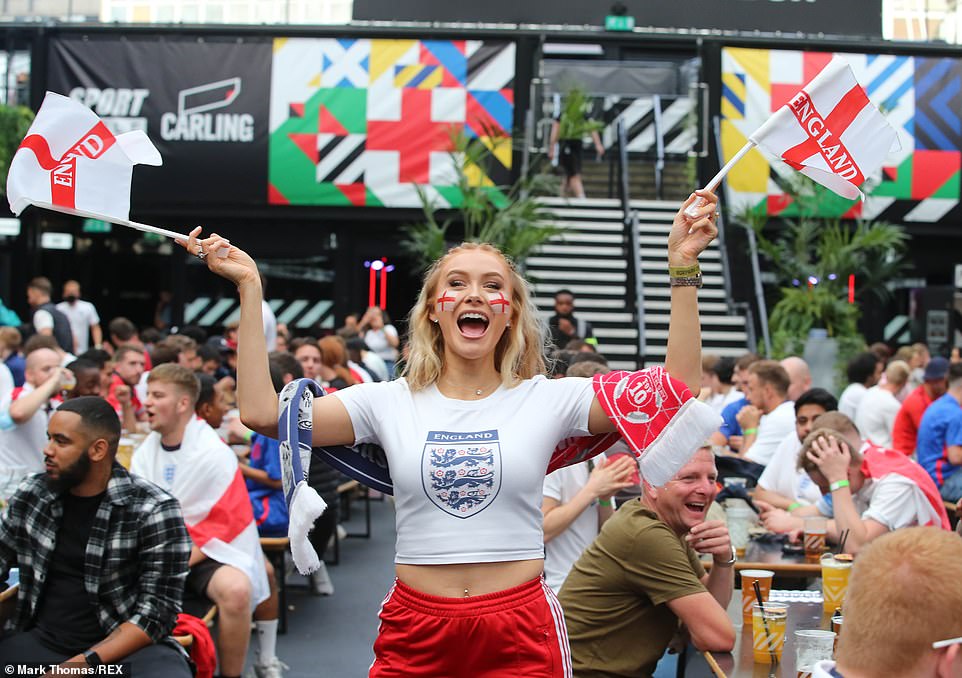 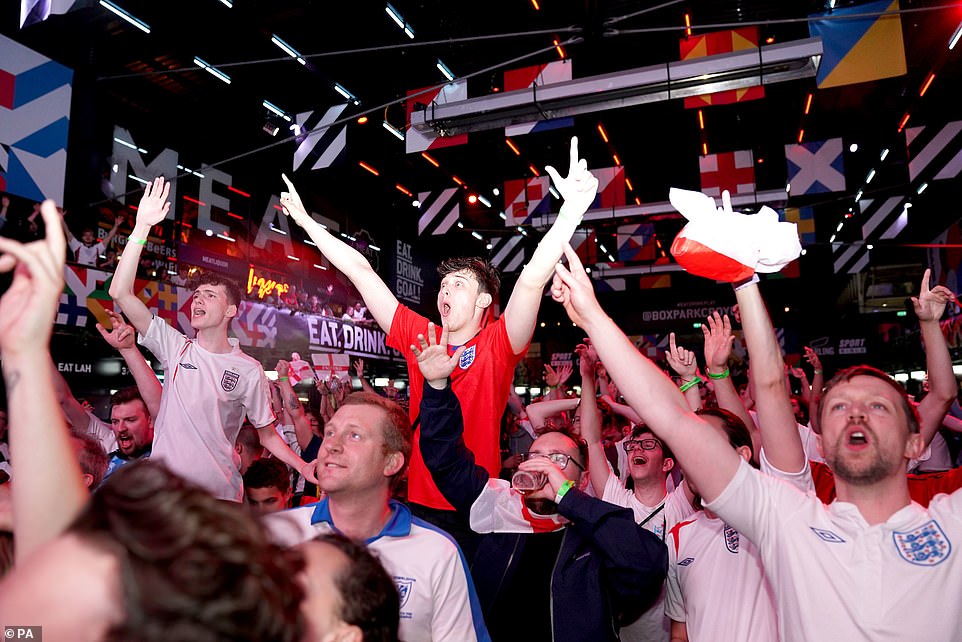 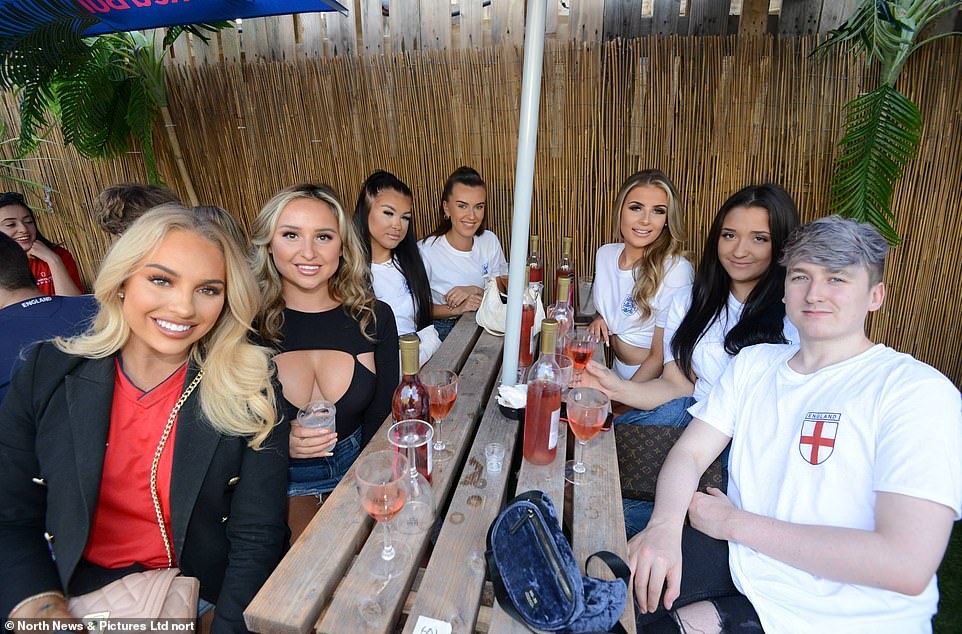 But with restrictions such as capacity limits and table service still set to be in place, spaces are already going fast 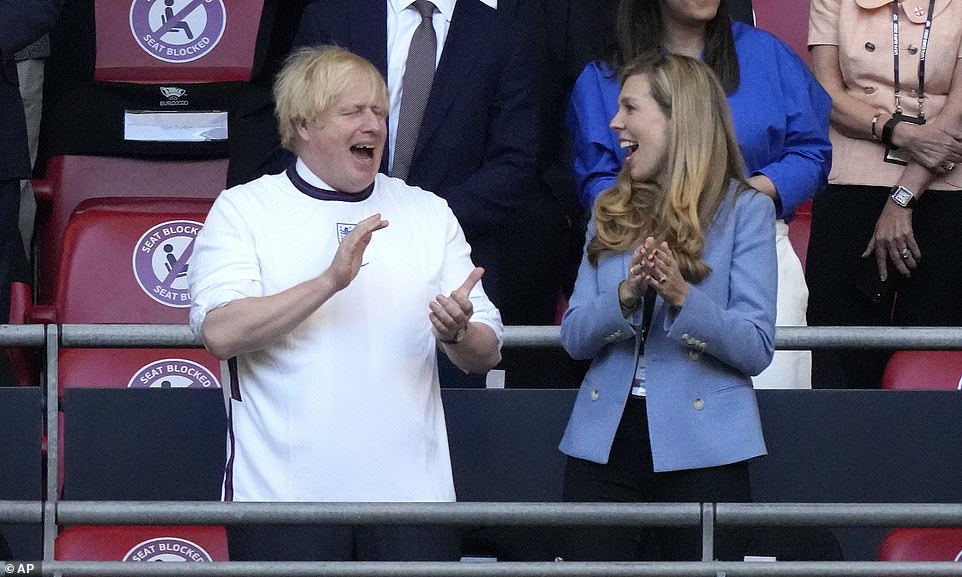 Boris Johnson (pictured at yesterday’s match) today appeared to pour cold water on the clamour for a Bank Holiday, saying it would be ‘tempting fate’. And one Tory MP remarked to MailOnline ‘we haven’t won anything yet’

Pubs, bars and venues were pulling 20,393 pints a minute as England played Denmark in the semi-final of Euro 2020, according to overnight data from financial app Revolut.

Overall spending was up 50.1% compared to the average Wednesday last month.

Bournemouth took the crown as the biggest spending region, followed by Romford in second place and Stevenage in third place.

It comes as the petition calling for the Bank Holiday reached more than 90,000 signatures.

The petition, which was set up on the official Parliamentary petition page prior to England’s semi-final victory, reads: ‘England may be playing a European Championship Final at 8pm on Sunday 11th July.

‘It would be beneficial and sensible to give the country the day off the next day if England win, in the form of an extra Bank Holiday Monday.’

The petition echoed calls on social media, with fans taking to Twitter to call for a Bank Holiday.

One said: ‘Come on Boris. Announce a special bank holiday Monday and a full house at Wembley Stadium.’

Another put: ‘If we win the Euros we deserve a bank holiday.’

Meanwhile, pubs and bars across the country are expected to be packed-out – as much as they can be under Covid rules – this weekend when England face Italy in the Euro 2020 final.

But with restrictions such as capacity limits and table service still set to be in place, spaces are already going fast.

Some savvy England supporters already secured their places at their favourite watering-holes weeks ago – with many venues already fully booked.

It comes as Box Park venues – which have become synonymous with images of football-mad England fans celebrating during this year’s Euro’s campaign – are set to release details of their ticket ballots later today.

Wetherspoon bosses also confirmed to MailOnline today that they will not be taking bookings – and will operate a first come first serve policy on Sunday.

Meanwhile, other England fans are planning to watch the game at home, instead opting for a few beers and a barbeque.

Taking to Twitter to speak about the rush for pub seats, one fan wrote: ‘Finally found something that is equally as challenging as childbirth… trying to book a pub in London to watch and England match.’

Another, including a video of a woman furiously typing away on a keyboard wrote: ‘Me rushing to book a pub and buy every bit of England merch I can find.’

Sports Illustrated Swimsuit model Hunter McGrady gets candid on her postpartum body: ‘I feel so grateful’

Man, 55, reveals horrific injuries at the hands of 'controlling' ex who was spared jail

An aunt has been charged with baby abuse after she was caught driving round with the...