A mother has issued a disgusting warning about the importance of cleaning underneath your sofa cushions, after she lifted them up to reveal old bits of food, playing cards, scraps of paper and lolly wrappers.

The Australian woman, called Jody Allen, shared a picture of her couch on Facebook, and wrote that she was horrified when she decided to clean up while her children were out of the house.

‘Boys have gone to grandma’s so it’s clean up time,’ Jody wrote.

‘This is what I found under my couch cushions. Show me under your cushions without touching a thing.’ 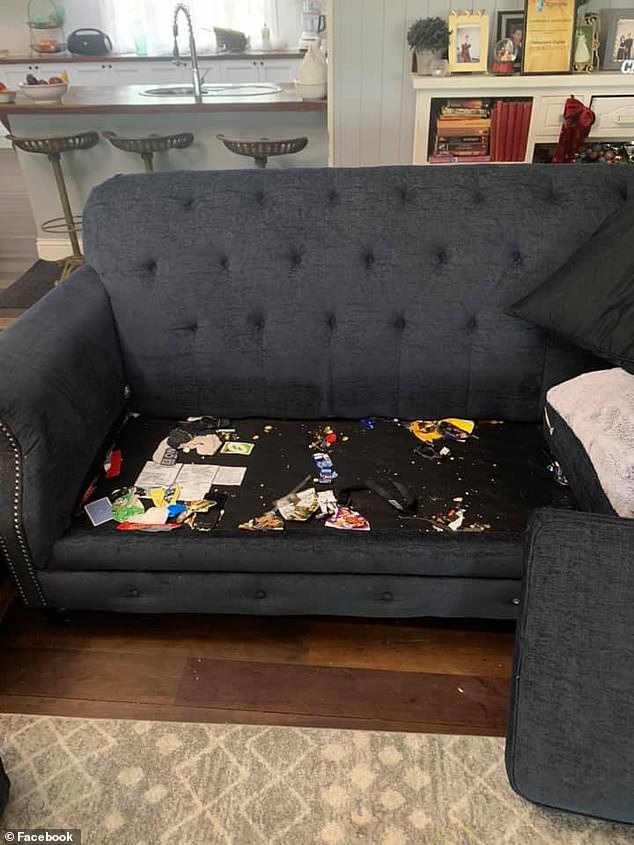 A mother has issued a disgusting warning about the importance of cleaning underneath your sofa cushions, after she discovered all sorts of rubbish (pictured)

It wasn’t long before the Australian mum was met with close to one hundred responses from other parents.

Many said they were ‘scared’ to check their own sofas, as they knew the situation would be the same.

‘This post makes me feel so much better about my housekeeping, knowing that it’s perfectly normal,’ one mother posted.

‘I’ve never been more glad we can’t take the cushions off our couch. I just shove the vacuum in the cracks,’ another added. 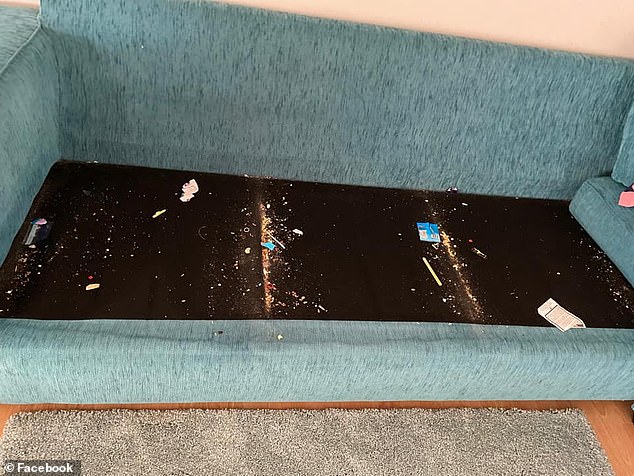 Others shared snaps from underneath their own sofas, which included crumbs, old food, biscuit crumbs and receipts (pictured)

Some shared pictures of their own sofa, revealing that the most common things they find down there are ‘odd socks, biscuit crumbs, Nutri-Grain, Lego and $2.55 in change’.

Another woman wrote: ‘I vacuum mine weekly so I don’t need to lift them to describe what’s under them.

‘[But there will be] seven pairs of underpants that he hides there each morning because he refuses to wear them. Mandarin seeds, a bucket worth of Lego, candy wrappers and 15 remote controls for various household electronic items.’ 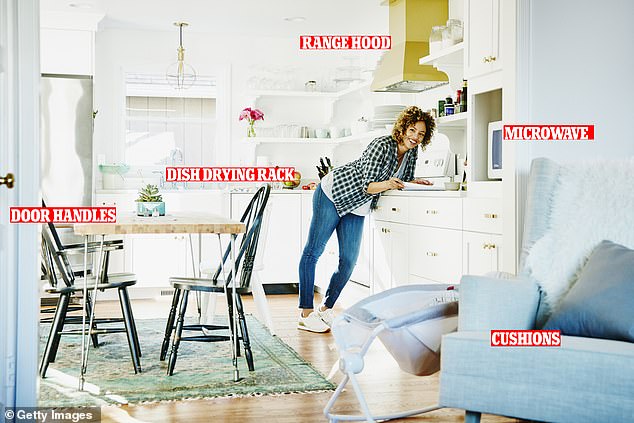 These are areas of the home that even the most meticulous people can neglect to clean, which one professional cleaner revealed (stock image)

The owner of an Australian professional cleaning service, Maid in Melbourne, previously revealed some of the most commonly ignored parts of the home when it comes to cleaning.

These areas included door handles, cupboard handles and light switches, as well as the shower – which is often neglected because many people think it ‘cleans itself’.

Rita Dossis said: ‘Clean the shower at least every fortnight.

‘We had a client who thought his shower glass was opaque. After we cleaned it [spending over one hour on it] he called us to say he had not realised the glass was clear.’

The professional cleaner said you should also think about cleaning your microwave regularly.

Rita said: ‘Get a small bowl, put about one cup of water in it with maybe ½ cup white vinegar and then put on high for 4-5 minutes.

How often should you clean various items in your home?

Floor: Daily (minimum once a week)

Appliance surfaces: Once a week (including fridge doors, toaster and coffee maker)

Oven racks: Every three to six months (minimum once a year)

Range filters: Whenever you use it, replace every six to eight months