An Australian mum has revealed how she prepped a month’s worth of work lunches for just $21 – and it only took her 15 minutes.

The mum posted a picture of her lunch on Facebook – explaining she had picked up three cold roast chickens for just $15 and made use of them.

She added two loaves of bread, which set her back $6, and then made sandwiches with the budget haul. 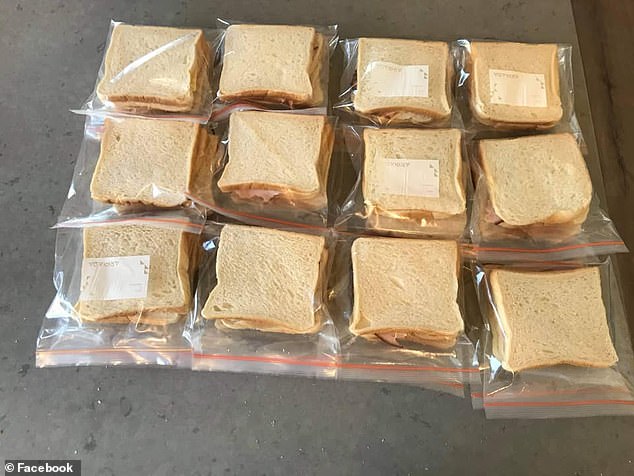 First the mum shredded the chicken, peeling the flesh from the bones and taking the stuffing and adding it to a separate bowl.

She then buttered 36 slices of bread, for 18 sandwiches, and added the shredded chicken and stuffing.

The mum then packed the sandwiches into single zip lock bags – freezing them so they wouldn’t go off and would be easier to grab each morning.

And people were blown away by her organisation.

‘This is so amazing, I wish I had a big freezer to d this,’ one mum said.

‘Tomorrow’s news, bread and chicken sold out in all major supermarkets,’ said another.

Some saw it could benefit their home lives.

‘Interesting, my partner eats three or four sandwiches a day – I could do this for him,’ one woman said. 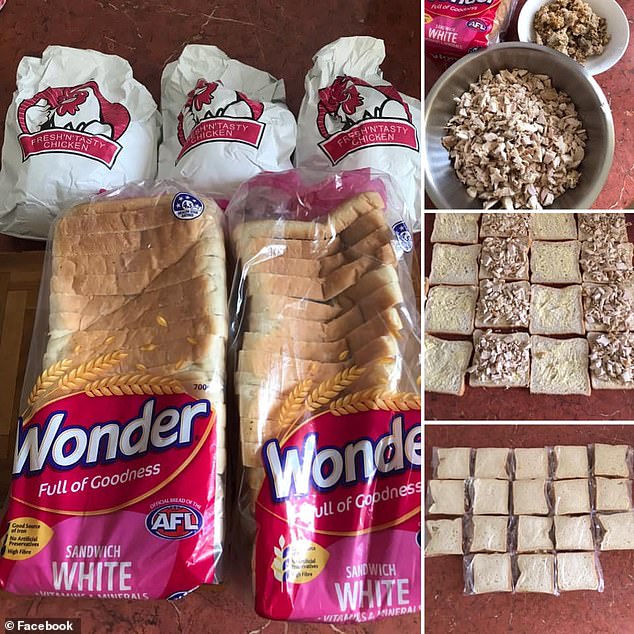 Others were worried the sandwiches would go off or be soggy once defrosted – but she assured them it was fine.

‘I mean if it works for you sounds good. Would the bread and chicken get soggy? Or taste stale.’ one woman worried.

‘You’d think so but I find that frozen bread thaws out like fresh bread as long as it’s sealed properly,’ she said.

‘If you microwave it it won’t but all she’d need to do is put a sandwich in the fridge the night before and then take it to work the next day and it’ll be like fresh bread by lunchtime.’

Others praised her for educating people on bulk meal prepping.

‘Great going. Also wonderful some people did not know you can freeze and you taught them,’ one woman said.

Some people were worried they would get sick of the same flavour sandwich each day.

‘I usually make a few different ones then I don’t know what I have until lunchtime and it is a nice surprise,’ one woman said.

‘Yuck, I need variety and would feel like I was turning into a chook,’ said another.

For the crab sandwiches, butter all the slices of bread on one side. Mix the crab meat with the mayonnaise and season to taste.

For the egg sandwiches, butter all the slices of bread on one side. Mix the chopped eggs with the mayonnaise, chives or parsley and seasoning. Divide between 3 slices of bread and top with the other slices.

Stack the crab and egg sandwiches in 2 piles. Using a sharp serrated knife, cut the crusts off and then cut the sandwiches into 4 finger-sized lengths. They can be made a day in advance, wrapped in clingfilm and stored in the fridge.